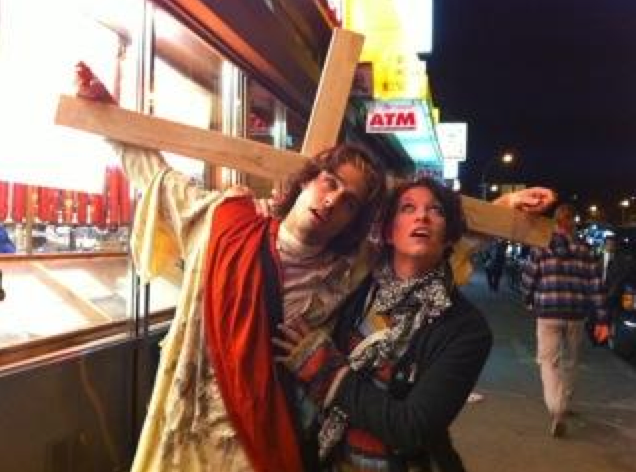 HAPPY VOTING DAY, WE ARE ALL SAVED(?)!! plus PRESENTS and a SURPRISE!

November 02, 2010
before i go on. if you’re in the US and your polls haven’t closed yet…go. vote.
a couple sites i tweeted about:
* to find your polling place text “where” to 30644 (via @HayleyFiasco)
* refresh your knowledge of the ballot before going in: http://onyourballot8.vote411.org/ (via @apocalyptech)
* http://whatthefuckhasobamadonesofar.com/ (via @colinbm)
now…thank you, back to our regularly scheduled blog.
i’m at the venue, preparing for night 1 of 2 of the dresden dolls’ hometown throwdown of punk cabaret rock love…hooray for earth are on now, so i’m going to get this quick dispatch out to you about my amazing weekend in NYC, and get ready.
tonight we play “the dresden dolls” in its entirety (plus more) and tomorrow is “yes, virginia” with some fun surprises…it’s the only time we’ve ever done this, and it should not be missed. tonight’s show is SOLD OUT (and tomorrow is close)…if you wanna come – and you SHOULD – lock that shit DOWN: http://www.dresdendolls.com/shows.html
now…
to catch you up…to catch myself up…
after friday night’s final performances of “cabaret” (which deserves a blog all its own), i dragged myself onto a NYC-bound train – with a few hours less sleep than i would’ve liked – but rolled into a spin-magazine-forced-cuddlefest with comedian/actor patton oswalt. spin played us the year’s music while we gave a vicious running commentary: 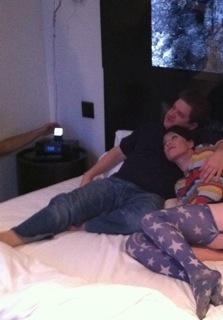 well, maybe the cuddling was our idea. still, it was joyous.
on my way back to the hotel, look who i ran into: 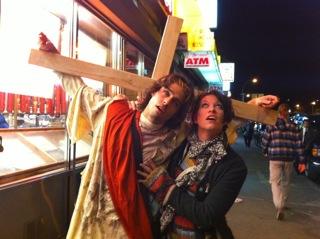 i asked a random passerby to take this picture with my phone. pulitzer material, i say.
after i said “BYE JESUS”, he informed me and the stranger who took the picture that we should save ourselves and that he wasn’t planning on doing it.
good to know.
awesome.
for those of you who are new york dorks, the salami hanging int he window behind us is the salami of katz’s delicatessen.
send a salami to your boy in the army!!!
got back to the hotel, and having been so impressed with patton’s awesomeness as a human being, i netflixed “Big Fan”, and watched it in the small hours to rest my brain. incredible moving film, dark, beautifully scripted and acted. patton is in NYC shooting another movie and hopefully we’ll see more of him. i’m hoping he’ll be one of the poster-boys for the ad campaign for my new line of perfume, entitled “FUCKING”. if you missed it on twitter, it would take too long to explain. go back a few days and try and catch up when you have a free moment…
sunday…well, sunday – the dresden dolls 10th bandiversary/halloween extravaganza/first show together in three years…….that too probably deserves a blog all its own. but it was incredible. people we love. people who love the band. the motherfucking dude that introduced brian and i 10 years ago (almost to the minute) was there. incredible. for now, a couple of photographic pieces of evidence it actually happened:
(with some assistance from a few fans on “the jeep song”): 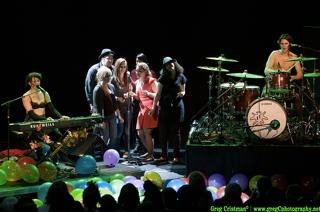 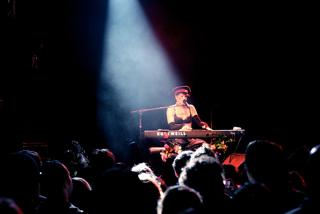 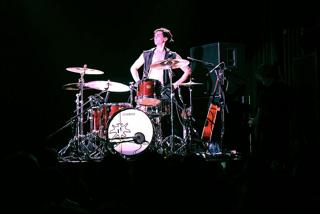 via http://www.flickr.com/photos/lucidfotos/sets/72157625293914160/with/5138123745/
BALOOOOOOONS! (magically dropped from the heavens after brian and i spotted a rare INSIDE-A-BUILDING DOUBLE RAINBOW and played its theme song!!) 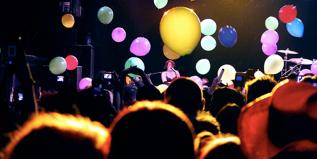 via http://www.flickr.com/photos/lucidfotos/sets/72157625293914160/with/5138123745/
the vibe was just…perfect. amazing crowd. great venue. awesome crew…..
we had the thisoneisonus crew (of incredible-fanmade-NIN-DVD fame) shooting video y’all will hopefully see soon, and we had both beth AND kayla, with help during
the post-show rush from casey and laura vogel. rocking merch for all the new STUFF.
here’s the gorgeous new graphic (designed by casey) on a limited edition poster we have… 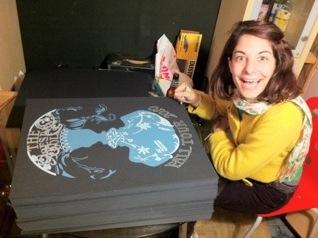 and here are some helping hands beth and kayla brought in helping prep all the shirts and hoodies so they can make their way on the road with us for boston, tonight… 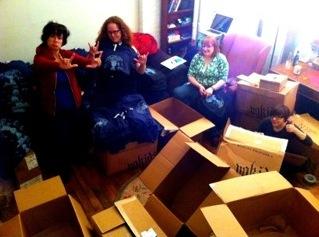 ANDDDDDDD……while it unfortunately isn’t dresden dolls merch (YET), could it get any better than this? 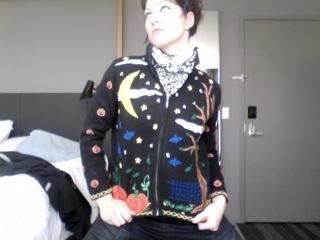 you cannot fuck with my halloween sweater. eat your heart out martha stewart.
wait…the BACK is even better: 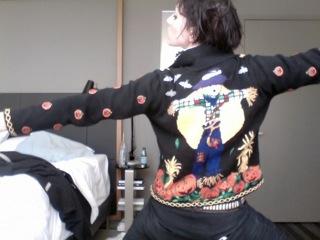 oh yes, before i go….
i have very exciting news for those of you who missed the announcement on sunday….
THE NEW AND SHINY RE-MODELED DRESDEN DOLLS SITE IS UP, just in time celebrate the tenth anniversary of the day brian and i met.
after living as a totally retro (yet beloved) site from 2003 with very few structural updates for the past 7 years, it’s gone through a massive overhaul that will hopefully serve as a much prettier, modern-er & easy-to-navigate spot to get updated tour info and peruse the archive of the band’s work. truth be told, there’s a LOT of cool stuff we’re still working on, but there couldn’t have been a more perfect day to relaunch, and so there we were. bear with us as we get the new video players fired up, and sort through years of photos for a facelifted “Gallery” section – make sure you’re following @DresdenDolls on twitter, and we’ll let you know as we roll out new content…there’s a LOT of it. we actually started this site design back in 2007 and it sort of got swept under the rug until being recently resurrected as a labour of intense love by one sean francis (aka @indecisean), who many of you know from team chaos as my personal man-behind-the-curtain of all things internetz. HOORAH from sean, and thank you to mike grigg, who designed the beautiful artwork on much of the site.
HERE IT IS: go behold! 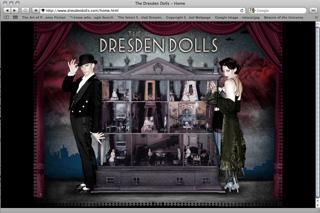 when you’re exploring, you’ll hopefully see this…but in case you don’t: as a special thank you for TEN YEARS of your support, we also put up our very first record — “a is for accident” — up for digital download as FREE (minimum donation is $0 but feel free to donate more if you can – it’ll go directly to brian and i)…
get it HERE:
wait, “surprise” you say?
WE ARE WEBCASTING THE SHOW…NOW! tell your friends and go, go, go and come watch us if you can’t be here!
http://www.partyontheinternet.com
xxxxxxxxx
afp
Back to Blog
« Previous Post
Next Post »