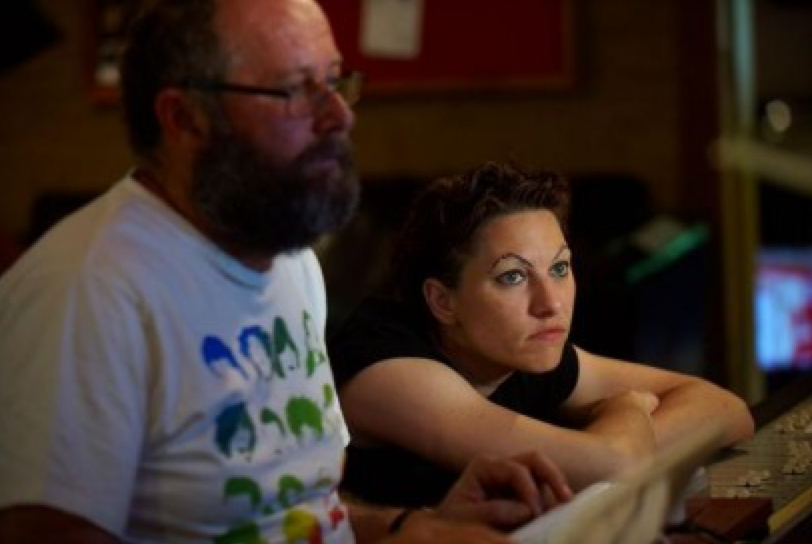 July 15, 2010
first of all, love.
there is almost nothing that makes me happier than being in a basement of a hidden bookshop with the man i love.
i like being alone around people, and even more i like being alone together with neil, and even better than more i like him being 12 feet away looking at books in the theater section while i look at books in the music section. and also i like being a camera and i like taking pictures on my hipstamatic.
if you gave me some nice pad thai in my mouth all at the same time, then i would be in true heaven. 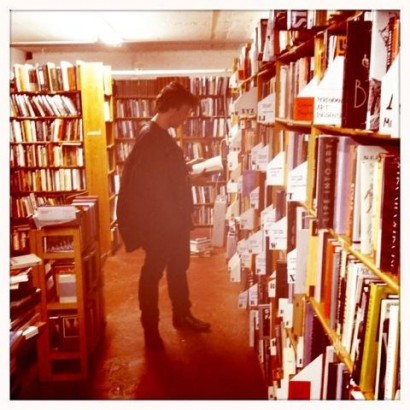 (if you’re wondering which bookstore…it’s McIntyre and Moore, in porter square, cambridge. i also took him to brookline booksmith. we bought hella books.)
……………….
second of all, UkuleleHead marches on. 5 days til release.
beth took a poll on the forum, and we found (to our surprise) that the aqua t-shirts decimated the black, after about 150 people weighed in on the vote.
who knew?
i thought you guys were bunch of vampires…like…strict black-shirt-wearers, at least this is what my touring merchandise experience has taught me.
learn something new every day, don’t cha?
maybe cause it’s summer. maybe threadless and their vast array of colors are changing the way we think about the t-shirt.
maybe (more likely) you’re all fucking like me and simply ALREADY have 56 black t-shirts, and have decided to mix shit up.
at the end of the day we decided to make BOTH to make the vampires and the color-happy people happy, and here they be: 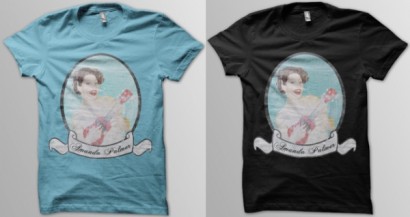 they’re being printed on super-soft fabric, and due to popular demand, we’re going to sell these shits à la carte (not just with the bundles)…..
so people: if you grumbled at us to sell ‘em separate, please get one. we’d be sad pandas if we tried to be nice and make ‘em, and then you all went and bought hookers n’ blow instead.
o happy day.
everything will be on sale the 20th the minute the record drops.
as i’ve said: want to know when? mailing list gets first crack at it all…
……………………………….
and so today, i thought i would tell you a little more about the record-making & song-picking of the record.
so, our story left off with me…playing the ukulele on occasion, with two radiohead songs under my belt.
i was touring on who killed amanda palmer, and had no idea what to do next with my life. i didn’t know anything.
well, i knew one thing.
well, lies. i knew several things:
i knew i needed to get off the fucking record label (the way they dealt with the WKAP release was abominable and someday i should tell that whole story. but not now.)
i knew i wanted to record some music with no pressure.
i knew i wanted to go back to australia.
i knew i had two radiohead songs on the ukulele.
and so i decided that i would go to australia, tour a little, book some studio time, learn and record another few radiohead songs, get the fuck off my label, and put out an EP, just because.
because…i don’t know why. because i could? because i felt like it? do not ask me these things. all i know is that in my head, i heard a little voice say:
YOU HAVE TWO SONGS, LEARN TWO MORE, RADIOHEAD UKULELE EP. and so i followed. i listen to the voices.
here’s where i decided to record…in adelaide australia. i found the studio by asking ben folds. i just emailed him and said “studio in oz?” and he emailed back “MICK WORDLEY IN ADELAIDE FTW”.
i called mick, found out he had a yamaha grand, and booked a week. and then i went.
i had no plan.
the week before i went into the studio, i posted to the box to see what radiohead songs people would recommend. i emailed mcquilken to see what he suggested.
and i asked sean to email me every record radiohead had ever made that i didn’t have.
i was intimate with ok computer, kid a, amnesiac, and the bends….and had heard but hadn’t spent a lot of time with everything else.
so sean emailed me everything (including tons of random b-sides and rarities he thought might be good). i downloaded it. and one night, i listened to every song radiohead’s ever made, and made a list of songs that
-had simple chords
and
-amazing lyrics
and
-i loved.
i also wanted this to be a pan-radiohead selection…some old stuff, some new, no more than two songs from the same record.
pretty much that same night, i decided to add “idioteque”, “no surprises” (which i knew backwards annd forwards), “high and dry”, and maybe keep my mind open to a few others (“pyramid song” and “house of cards” were in the running for a while).
the only thing i regret is that i couldn’t make “anyone can play guitar” (from pablo honey) work.
i mean, that would have been awesome.
because anyone CANNOT play the guitar. it’s hard. i’ve tried. it hurts.
but ANYONE can play the fucking ukulele. i swear.
anyway
i went into the studio, and we recorded about a song a day (except “creep” and “fake plastic trees”, which took about an hour each since they were simply voice & uke live).
here’s some photos of me in the studio with mick: 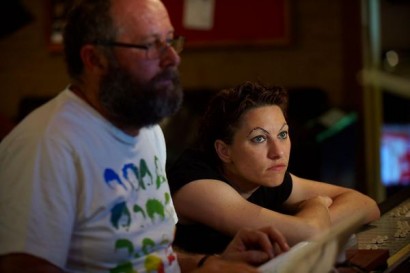 photos by milton wordley, mick’s brother!mick and i listening to mixes… 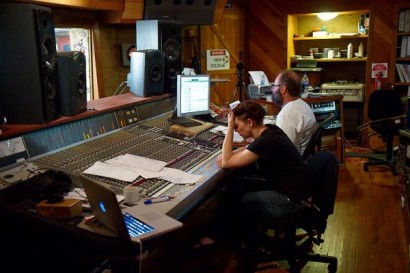 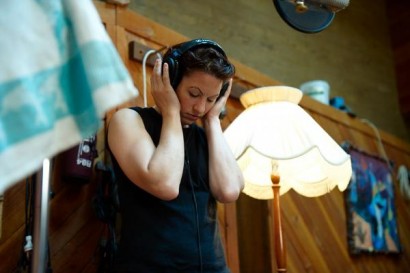 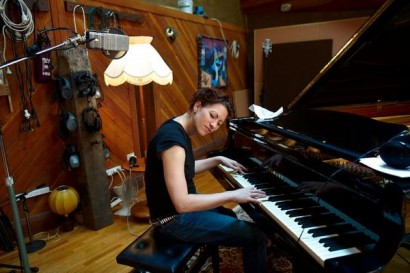 mick was awesome, by the way, and was, in twitpic responses, very constantly compared  to abbie hoffman. good call.
mick built his studio NEXT to his house, and we would eat dinners in his kitchen with his wife and two kids (or whichever one of them was around, they were unruly older teenagers)
the highlight of mick’s house with the chook-house out back. fresh eggs, every day. they also had an amazing garden. and an espresso machine. i was in paradise.
a handful of my australian fans actually got to come in and SEE the studio, since i twittered a little ninja gig inside the joint one of the last nights i was there….
here we is, all together, in the control room: 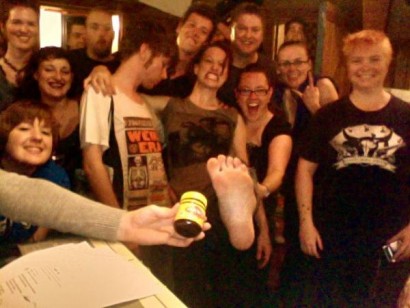 yes, that is somebody’s evil hand with a jar of iSnack 2.0, aka vegemite with cheese, aka THE BLACK DEATH + CHEESE, creeping into the picture…
and here’s me playing “no surprises” on the toy piano…. 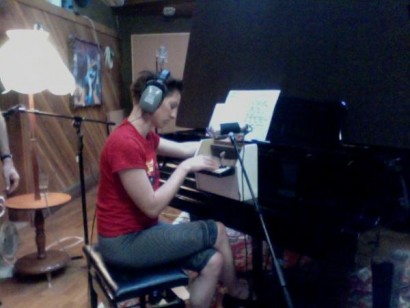 taken on my macbook, baby…

so yeah, “no surprises”….
….which we recently made a video for (while i was down in new york on tour with Evelyn Evelyn).
it’s going to be a homage to the original radiohead video; a rotoscope-based animation clip made by a fabulous team, and to start the animation they needed a reference-filming of my head singing the song.
if you know the original…
…then you’ll understand why we also needed to film me in a bathtub of director Ron Eyal…
…and if you really want a good cry, go look at the section of the radiohead documentary “meeting people is easy” where they show poor thom yorke doing the take of the video.
poor thom:
our video should be ready, if all goes according to plan, around the 25th of july or so. i’m excited as fuck.
………………………………….
last of all, pain.
speaking of things being suffocated, trapped, sad and wet….
can’t tell you why at the moment, but i’m searching for a good cause to support down in the city of new orleans.
i am, like the rest of the known world, incredibly disheartened by the situation down there and the impact on the folks and animals, and was wondering if any of you knew of good LOCAL org that could use some funding/help.
there are plenty of big ones – gulf aid, Greater New Orleans Foundation Oil Spill Fund, gulf restoration network – but i was wondering if any of YOU live down there and know of a smaller group/org that is doing good, real work to help the animal/human/business victims of the spill. i’m espeically curious to see if there are any small networks of people helping the birds out – i’ve heard that there are groups looking for help to clean the poor guys off. look, they’re very dirty: 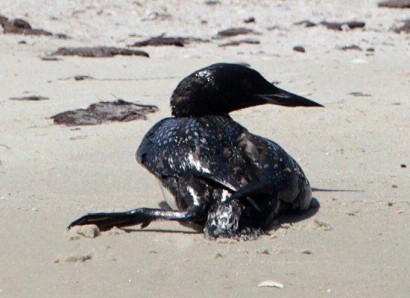 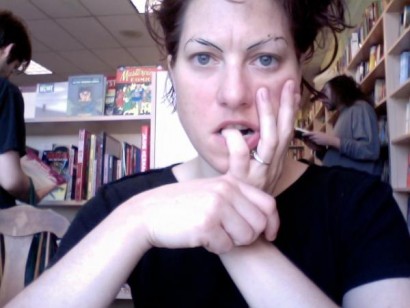