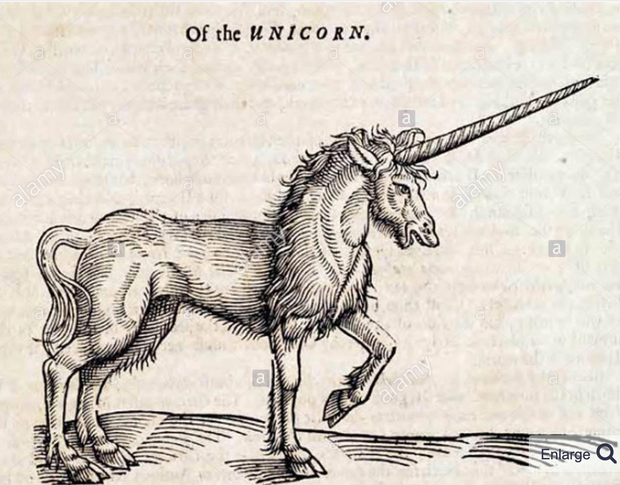 WE ARE A UNICORN covered in stars

greetings from my coffeeshop in melbourne. i’ve been recovering from perth and spending most of my time either in bed with ash or making food or catching up on email in this coffeeshop. i am really tired…. 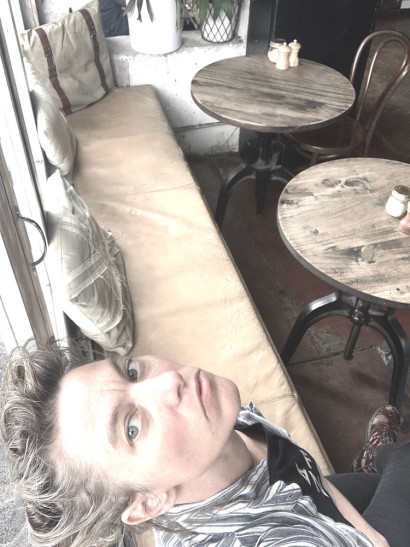 and happy. our bushfire benefit @ the forum on march 8th is all but sold out (i think there are 20 tickets left). neil is tired too. it’s been almost 7 months away from home. we are feeling it hard.

and jesus almighty. it seems like months since i’ve actually sat down with a second to think. between tour and the bushfire record, i’ve been burning it at both ends and manufacturing new ends to burn.

i haven’t actually talked very much about how i’m feeling – which is always what happens when there’s too much to ANNOUNCE and all that…and i never like it. i get to talk about how i’m feeling on stage every night to the people who are there, but then the internet (and especially the patreon) can start to feel like a funnel of promotion and information and….i’m used to this cycle. soon i’ll be able to go home and work through all my feelings from this tour and the whole nature of the patreon will change again.

this in itself is kind of fascinating and kind of an amazing thing about patreon itself….because, in a way, this is a subscription. a subscription to me and my writing and my artwork.

this is so different. i’m sure there are patrons out there who have been deleting post after post of nitty-gritty australian tour details.

it’s one feed, it’s one funnel, i’m one artist doing so many things at once and this is the single station.

it’s something i think about a lot and also something i’m hoping to fix when i launch the new website (yes, the one that has taken me the last four years to build, sorry)….and it’s also something i’ve been reflecting on in the wake of my official patrons’ facebook group meltdown in the fall….and i think a lot about how we can use the internet for good, as a good, safe, strong place to exchange ideas and love and help each other. and listen. and be together. i’ve been thinking about this shit for twenty years since we built the dresden dolls’ first website. and i never stop, because i see what people love and need, and i know what i love and need, and i see the internet as this beautiful tool so full of potential and also so full of destruction. i don’t take this community for granted. fuck, we are the only community of 15,000 people supporting one weird-unicorn-indie-singer-songwroter-person-lady. we are a unicorn. wait, that’s the new shirt.

WE ARE A UNICORN.

and like a weird unicorn, we kind of don’t exist in the eyes of the world. but we’re real.

wait, are we REAL?

i had to share these two tweets from this morning, first from me, and then neil’s follow-up… 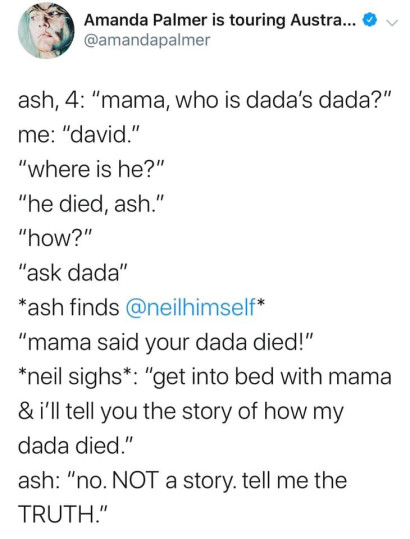 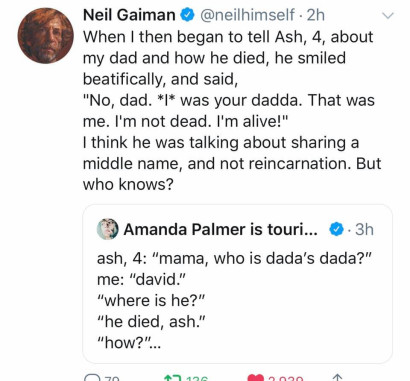 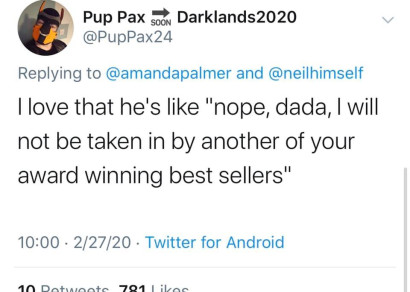 speaking of which, here is ash at the adelaide fringe with what he calls a “skellington”: 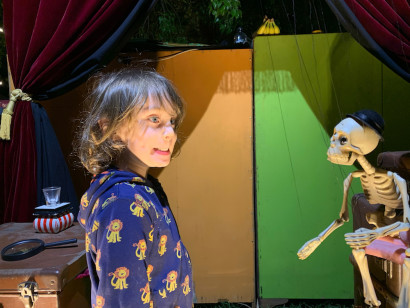 so while we are on this topic of being unicorns, while i got you here…i have a couple beautiful things to share.

my show in australia has gotten a whole load of FIVE-STAR REVIEWS, and one four-and-half-star review….and that’s no fucking laughing matter and i am so so proud.

if you’re not familiar with fringe and festival world, shows get reviewed and starred, and it’s a werird language of reviewers and theater-people, and a five-star review is really, really, relly fucking hard to get. most really good shows earn four stars. five stars are seldom handed out. the fact that i got more than one bowled me over.

this is a solo show, but i don’t really do it alone. if you’ve seen it, you get that.

the audience has to be willing to go there with me to make it work.

the patreon made this show happen. if you’ve been following the plot, you understand what this all means, and…especially my australians who showed up in full force…. i hope you are as proud of these reviews as i am, you earned with right along with me, you really did. 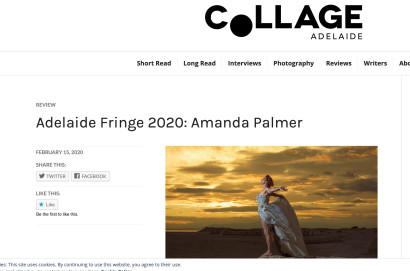 Palmer says it herself, a show of this length, especially in the fringe world, would be classified as “commercial suicide”. But breaking away from this commercialisation has made Palmer’s career so successful, funded on her loyal patrons, many of them in the audience that night. This brought a sense of community unlike any rock concert or pop performance I’d seen previously.

The depth of connection was palpable as audience members held each other, cried together, and shared laughter throughout. 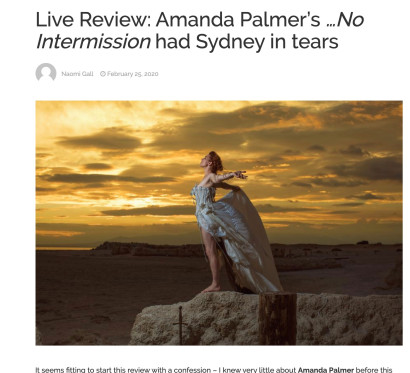 “It seems fitting to start this review with a confession – I knew very little about Amanda Palmer before this night. I’ve never listened to The Dresden Dolls, have never seen her perform, I’d never even heard her sing. But after tonight, I know more than I ever thought I would…”. 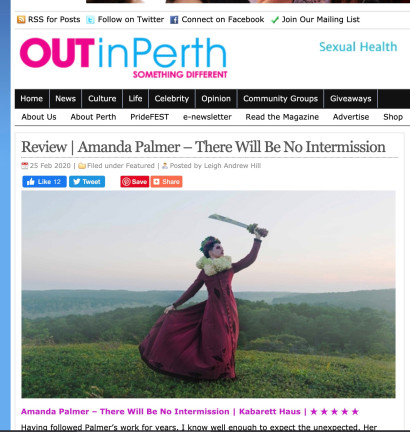 Is there such a thing as stand-up tragedy? If there is, she nailed it. The primary theme of the show was, of all things, abortion. Not just that though.

Over the course of the night Palmer touched on a plethora of topics that very few artists would be willing to touch. Abortion, miscarriage, pregnancy, parenting, climate change, queerness, family trauma, genocide, fear, depression, radical compassion, murder, prison, mindfulness, sexual assault, death, grief, bushfires. An hour or so into the show she told the audience that if anyone had come along with no idea of what to expect, they were more than welcome to leave, and she wouldn’t be offended. At the intermission, unsurprisingly, several people did so.

You might think that a show covering such heavy topics would be miserable to watch, but her expert use of humour, empathy and kindness allowed her to carry the audience through the dark without despair. About halfway through the show Palmer said that in her view, an artist’s job is “to go into the dark, and make light”. She does just that, unerringly. 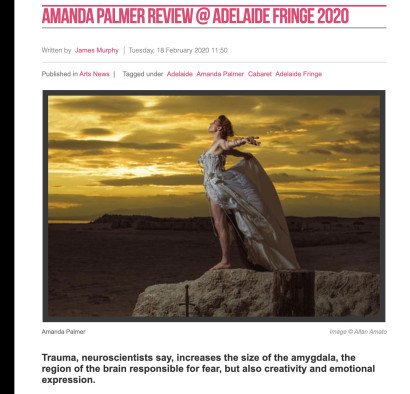 Amanda Palmer has experienced so much trauma in her life that it took four hours to lay it bare. She possesses such artistry and sincerity, though, that even after 240 minutes seated on wooden Bonython Hall seats, fans ferociously called for an encore…. 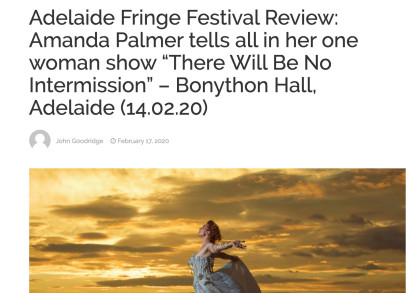 This show is a must….

god it feels good to read that.

it is almost over.

four more turns on the stage and then i am DONE. you cannot know how good it feels to know that i pulled this off and that, after this many times on stage, i think i GOT IT RIGHT. i figured it out. it took almost a year. but i am fucking NAILING IT. YOU ALL HELPED ME. every singe one of you that came to the show across the globe.

WE ARE A UNICORN COVERED IN STARS. 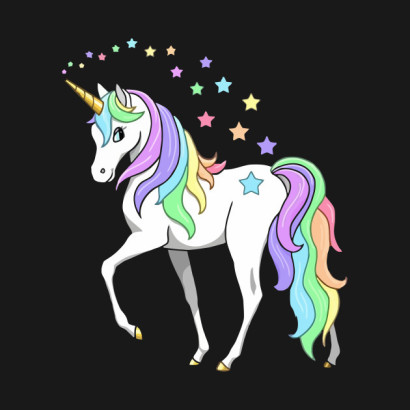 meanwhile, the great collapse is nigh!!!!

i am so exhausted and i have so much to tell you about this year when i slow down.

within the next few days, the boston pops is going on sale, i’m going to finally “thing” the footage of “beds are burning” (REMEMBER BACK WHEN THAT WAS THE PLAN BEFORE I MADE A RECORD BY ACCIDENT? HAHAHAH)

…and i’m planning to write a much longer story about the new tasmania song, which sort of got swallowed up by the whole record thing. but it’s such a powerful song and story and i can’t wait to tell it all…and also get you ready for the documentary what we made down there, that will tie it all together.

this is also a reminder to all of you that if you want to get a copy of the BUSHFIRE POSTER, there’s a closing order window. go grab it while we are still taking orders, it’s all going to a wonderful cause. 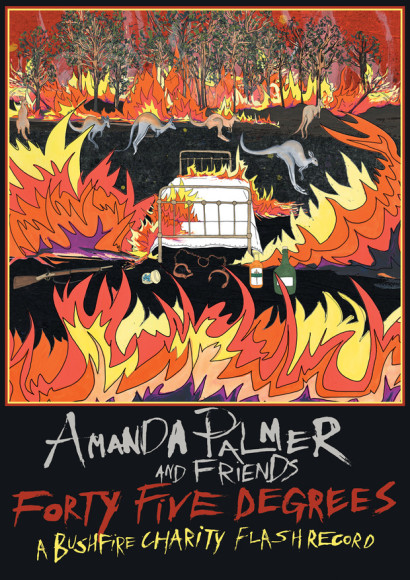 I LOVE YOU MY DEAR UNICORNS COVERED IN STARS

i’ll read the comments tonight before bed or tomorrow on the plane to darwin.

see you soon if you’re coming.

a quick letter from a smoke-covered city.