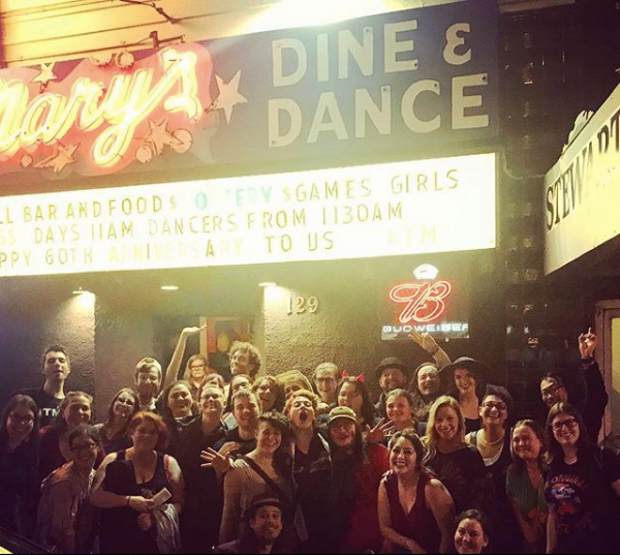 WE DID THE THING. my dear patrons, in the words of the strippers at mary’s club said last night as jason and i jumped down from the red-lit-stage that has seen exclusively nude gyrating for decades…”MARY’S CLUB HISTORY HAS BEEN MADE”.

about 60-70 patrons + friends showed up at mary’s club last night, many of them strip-club virgins, and i think we broke their cherries gracefully. i handed out a lot of dollars. i managed to talk to just about everybody and it was really nice, as many other people pointed out, to be in a strip club on our own terms, with all of the sleaze factor shaken off.

the three strippers who were on shift (stage names: missy, una and candi – all incredible dancers with serious pole-talent on various spots of the goth spectrum) were PSYCHED; one of them was an old fan of jason’s, and one of them was a huge fan of my book & TED talk. who knew. she pole-danced while jason and i took the stage with a guitar and did a duet of “icarus”. i have never before played music in this way. we hadn’t been counting on playing (it wasn’t our stage, after all) but we’d brought instruments just in case.

i hugged a lot of people. also, we had a massive amount of space left on the guestlist for the sold-out portland show tonight, so i got to go around being guest-list santa claus for all the people who hadn’t gotten or couldn’t afford tickets. (we’re maxxed now, we have 50 people on the goddamn guest list tonight, whoohoo!)

after this trick and the “everybody pick out a poetry book” ninja gathering at powell’s a few years go, i feel like i deserve a special weird medal for pumping dough into the portland economy extremely creatively.

i wound up NOT posting about the meet-up on twitter or facebook…i sort of did an experiment. i posted about this yesterday at 3 pm and asked for RSVPs and figured that if only 5-10 people put their hands up, i’d bop over to twitter and ask people to join us. but about FIFTY people RSVPd just on the private patreon post…which led me to realize that things really sort of have changed. there’s a nice built in community-cap to doing little gigs as i grow and get bigger, and i think i’ll probably be using the patreon-only tool to my advantage to do weird shit like this in the future. so, yeah. go patreon. not just for breakfast anymore. twitter is feeling weirder and weirder. it isn’t BAD, but it isn’t special and fun and comfy like it used to be. the noise is strangling it, the algorithms are strangling it…it isn’t like the old days, yo.

but we have this. thank christ. and i love this.

and speaking of the internet. one more thing…

i hadn’t really thought about it, but there’s a strict (for obvious reasons) no phones/no photos policy in the strip club.

it hadn’t occurred to me that i would be allowed a phone-free oasis with my fans/patrons/friends. it was SO FUCKING NICE hanging out in a room with music with a ton of people with NO PHONES, NO PHONES AT ALL. nobody asking for selfies, nobody live-instagramming their excitement.

without realizing it, we have unlocked the secret to the future:

all future patreon meet-ups should be held exclusively in strip clubs, where everybody will be forced to be in the moment.

hmmm. but that being said: most strip clubs aren’t like this one (fun, and run by a woman). dammit. where else can we meet where phones are verboten? cathedrals? in the passport/customs line in international airports? funeral homes?

anyway: here’s a photo that was taken OUTSIDE the club by the friendly bouncer. only about half the people from the club are in it (the rest were inside) but you get the…picture.

and now, tonight: PORTLAND, we sleigh you.

see a lot of you soon.

huge thanks to melissa, for having the idea, and huge thanks to tracy the bartender, for being game and givin’ us our drinks for free.

ooh that reminds me, tracy did sneak in one illicit picture from the bar…

i’m behind jason, and our beloved dancer is behind me. so we’re safe… 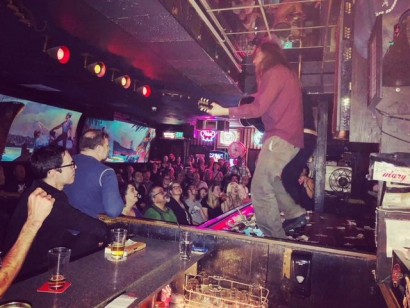 ….and thanks to all of you who came last night.

and that really was a fuck-tonne of fun.

if any of you coming to the show in portland tonight are looking for a meet-up spot after the gig, YOU KNOW WHERE TO GO. mary’s is right around the corner from the crystal ballroom, and some of our favorite friends from last night are on shift….bring your ones.

p.s. there’s a great little interview in the seattle paper The Stranger with me today. read here: https://www.thestranger.com/slog/2018/04/06/26014944/amanda-palmer-wants-to-party-with-you-this-sunday-after-her-show 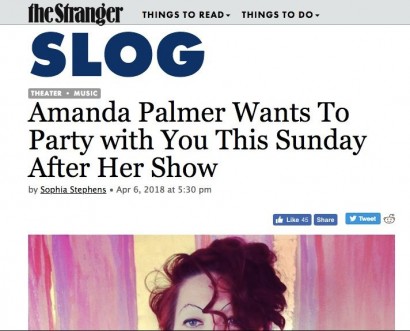