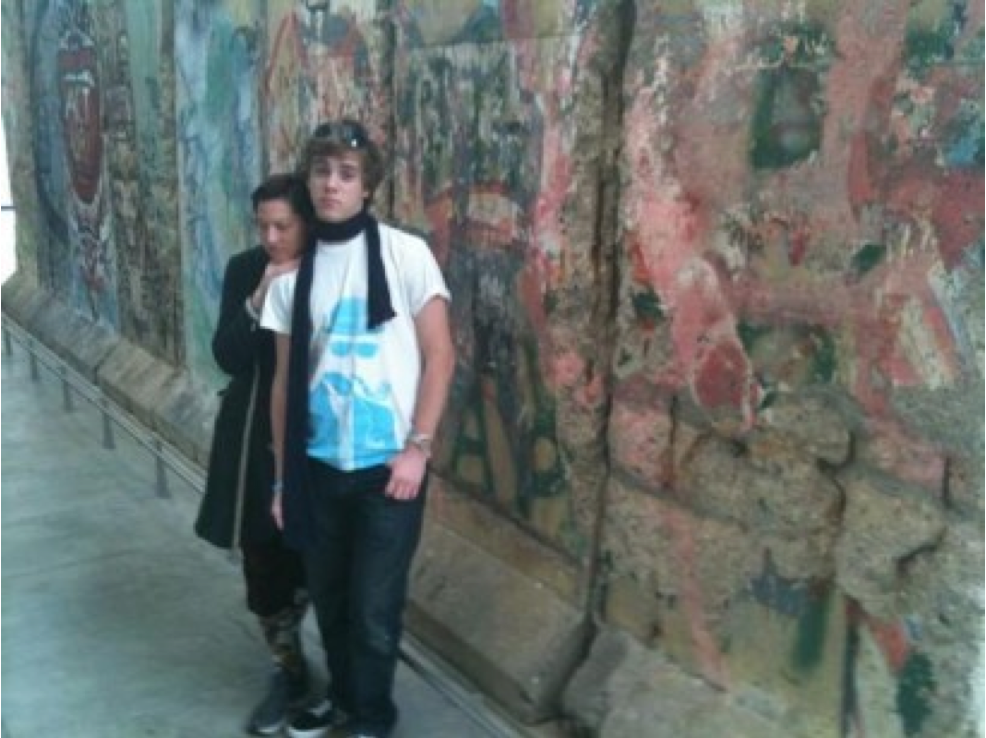 i arrived late monday night in DC to visit my dad (jack), little half-brother (alex, who’s 15) and step-mother donna.
my sister and her beau, gareth, came down with me on their way back from the boston thanksgiving to their european homebase in holland.

i was overwhelmed by everything yesterday, have to admit it, still haven’t quite done a complete reality check, still haven’t gotten my period.
i wager 50 bucks on getting on the plane without a tampon. we LOVE that.

maybe i should buy some tampons at the airport.

i ignored life, business, and reality and instead concentrated on the actual news today.

we visited the Newseum, which is a stone’s throw from the capitol building, it opened about a year or so ago where the national hotel used to be
(famously, where john wilkes booth stayed before assassinating president lincoln.)

it was HEAVY fucking DUTY….like i twittered: i don’t recommend going while experiencing PMS unless you want to cry every few minutes.
the admission is twenty bucks (as opposed to the national gallery and pretty much every other DC museum, all free and funded), it’s slightly glossy & hi-tech, BUT you can’t go wrong when your fodder is the biggest, most gut-wrenching life-changing events of the last century and how they’ve been portrayed.

outside the museum, for all to peruse, are the front pages of every major newspaper in the country, by state, so you can read ALL the daily headlines.
very cool to see how it all compares and stacks up…. 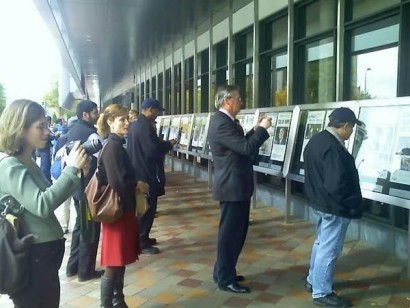 (stolen from http://blogs.nationalgeographic.com/blogs/intelligenttravel/Newseum%20Headlines.jpg, all the other pictures are by MOI or my sister)

they have a huge section of the (west) berlin wall…..that’s alex, my little bro…. 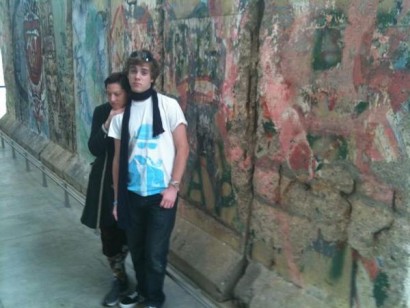 and an INCREDIBLY moving exhibit of 9/11, including a section of the antenna from the south tower and a ton of papers that came out on 9/12….. 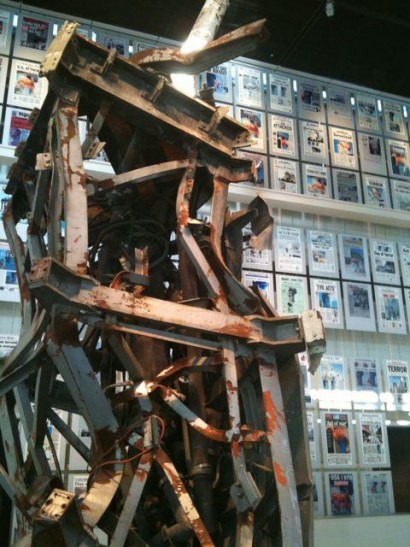 a great lincoln’s-assassination exhibit….i photographed a bunch of the imagery b/c i think i’m going to start going, aesthetically, in a faux-painted-b&w photo direction this year.
i simply love it every time i see it, the high contrasts and the surreality: 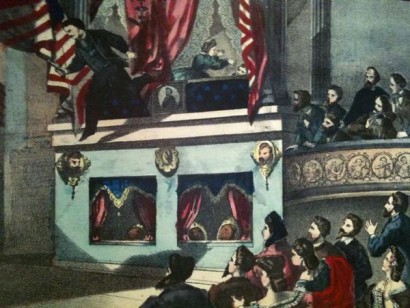 this pulitzer-prize-winning photo was taken just blocks from my house in the south end of boston…..
i’d never seen it.
there was a HUGE fire in the back bay in 1976, the year i was born.

crazily/wonderfully, the child in this photo survived the fall….. 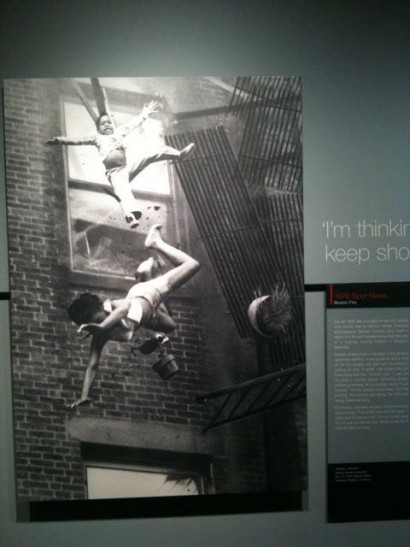 …and i ran into two priests who were PSYCHED by the woodstock exhibit….. 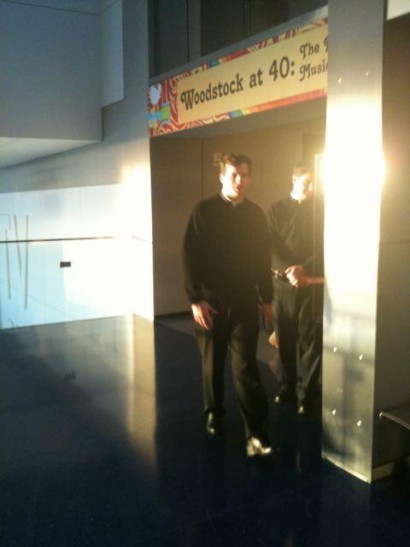 i’d been twittering my ass off from the museum (most of the former shots made the stream)
and this wonderful chick jaime (@wojo4hitz) was reading my twitter and working in the DC courthouse one block away.
she staked me out and when we left the building she came up to me. we walked for about 10 blocks and caught up on life & media.
she was rad, and an AVID follower/filmer of tegan and sara. it was my first hardcore “i found you through t&s and love you” fan and i felt special.
thanks tegan and sara. 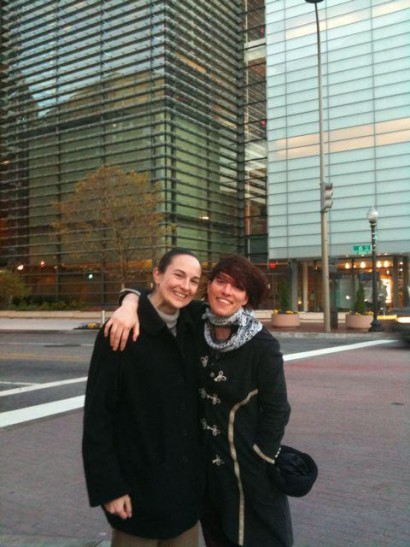 then we Did A Fancy and went to the private bar of the national press club, since my stepmother donna has an in (her father, don larrabee, used to be the president – ooh lala).
we drank beer and discovered that they had an upright piano that had once been played by harry truman while effing lauren BACALL sat on it looking fancy. 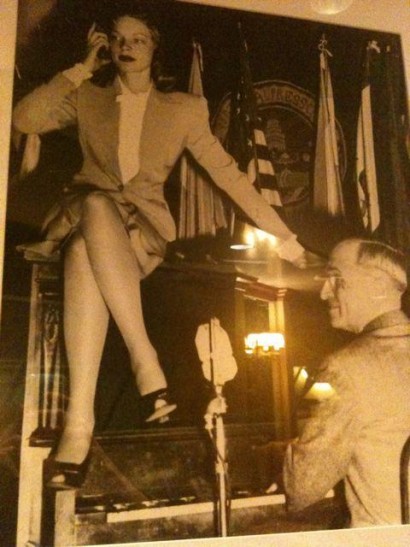 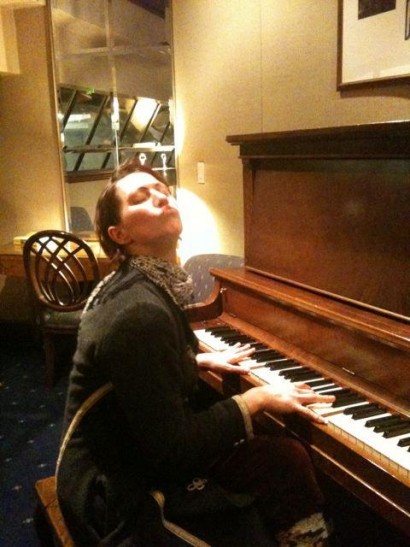 we’re sending 34,000 troops to afghanistan. ok. what does it mean? fucked if i can tell you. i can tell you that the man Gives Damn Good Speech.

i haven’t had a TV for so long that it FASCINATES me to see those people moving on the big screen.

it brought up an interesting point, having spent the whole day in the newseum.

granted: i am PMSing.

but while looking over an exhibit of the DC sniper with my sister, i brought up an interesting topic…..

i don’t read the news. well, sometimes i do. sometimes i junkie out, on it. but rarely. less and less.

i rely, like many people do, on the “if it’s important, it’ll find it’s way to me” system, and when i’m feeling LEISURELY i’ll pick up the new york times and skim it cover to cover, with special attention given to the arts section.
i remember following current events back in 2004, 2005, i’d be home from tour and read the paper every day after yoga.
near my period days, i’d cry at pretty much any article that involved faith, death, war, or humanity (hint: i could not read the paper while PMSing without crying two or three times. for real. i didn’t need to keep a calendar).

at some point i stopped. got busy. did business of band and touring life instead. checked email instead of the news.
i figured i did not need this extra information of faith, death, war, or humanity in my life.

i never went into a total vacuum. but mostly…? BBC world news in the car when i was driving at home (rare) and that was IT.
fuck it.

i mentioned this to my sister.

(my sister at this point was appalled and pointed out that it was my human obligation to know all news).

where had i BEEN? what was i DOING?
i don’t know. other things? does it matter? i’m not sure.

i’ve always been incredibly spotty in this area, to say the least. i couldn’t name you a shitload of vice-presidents and i cannot tell you how a bill becomes a fucking law.
i haven’t had a TV in my presence since i left my parents house at 18.
my grasp of history is like my knowledge of music, incredibly specialized and really useless (i can tell you a lot about german unification and the revolutionary war in the states, and i know NOTHING about pretty much anything else, and don’t think i’m kidding. but i also didn’t know exactly who kurt cobain was when he died. i miss a lot).

in addition, i think i started making excuses when i started traveling the world and considering myself a resident of Nowhere, Planet Earth.

the question posed was: what do we need to know about what and why?
how educated do you need to be, and why?

does it matter if i don’t know that that people in DC were getting gunned down by a couple of crazies form the trunk of a car?

how much of how much do you need to know?

i make the argument frequently that we’re overstuffed with information. there’s just too much, period.
we don’t need to know how many people are dying all the time everywhere. we’re not BUILT that way, dammit.
we’re psychologically equipped to deal with the deaths of our own village. MAYBE the next village over.
that’s IT.

i brought up the recent trip to china i was on, where i saw people who i could only assume, in their small village lives, had only a VERY PASSING GRASP of national affairs (much less american affairs) in their sphere and it made very little difference to their families, their work, their world.

i do, however, know and feel to the core of my being that as an american, i’m coasting and basically letting a ton of people do my job for me  by not constantly voting in my local elections and not calling my senators when something’s important. sometimes i let myself off the hook by blogging about political things and pointing lots of people in a certain direction. but only sometimes.

it brings up TONS of issues, political, personal, and non.

now i need to know:
how many of you follow the news, how much, and more importantly, WHERE?
newspaper? online? tv news? radio? pacifica? huffpo?
every day? once a week?
more importantly….why?

note: perezhilton doesn’t count. neither does TMZ or tuning into the daily show (though you get points, i suppose)…i’m talkin’  ”the actual news”, even though i know that in itself will start an argument.

do you feel guilty? 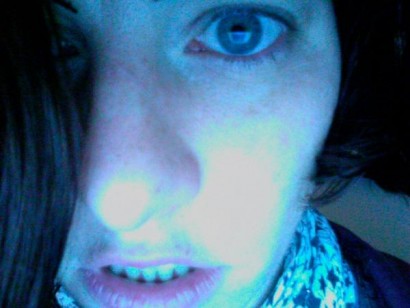 p.s. in NOT actual news news, i’m in the huffington post today…
a FANTASTIC in-depth article by holly cara-price that discusses a lot of great things: http://www.huffingtonpost.com/holly-cara-price/amanda-palmer-ino-rulesi_b_375071.html

and in other news, YOU ARE THE NEWS.