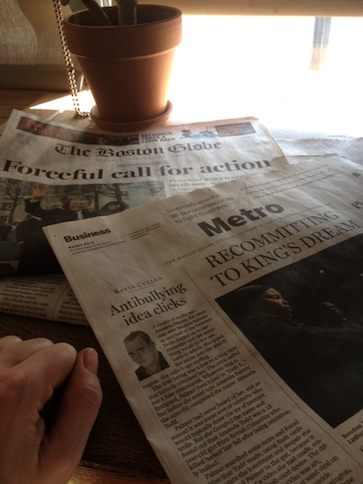 and in other news, YOU ARE THE NEWS.

just checking in quick-like…i’ve been buried in TED-talk-writing land. THANK YOU ALL SO MUCH for the incredible comments you left on the TED blog – it’s the first time in my blog-writing history that i’ve been RE-READING the comments, watching the conversation so closely…figuring out this talk is much, much harder than i thought it would be, and i’ve loving the terror and the challenge. stay with me.

this morning, we were all in the boston globe.
i don’t know if this is the first time the blog itself has gotten this kind of ink, but damn, it’s beautiful.
a great writer from the boston globe, kevin cullen, got interested in the internet-hate blog and the amazing things that were happening in the comments (some of the comments are even quoted in the article).

the boston globe is ready every day by about 300,000 people.
i love that this article is not about me – it’s about us.
THE BLOG COMMENTS ARE THE NEWS.
not to get all fuzzy-wuzzy on your asses – but do you see how much YOU MATTER?
i mean, fuck yes.
this is what this means, again: we are the media.
we lead the conversation, the media follows.
IT is US.

i wrote that blog because i wanted to get input in order to write a bigger blog, a more “distilled answer”.
but you BECAME THE ANSWER.

the answer is TALKING ABOUT THIS SHIT. there’s no other exit. we need to be talking to and helping each other.
that is the solution – not scare tactics, not making more fear. connection talking, sharing….this KILLS fear.
it makes us less alone.

here’s the whole article, please read it, enjoy it, bask in it, share it.
and you’ll be happy to know i’m seeing it being tweeted and spread all over the net today by teachers, other journalists and a lot of people interested in bullying/anti-bullying. amazing:

A couple of weeks ago, Amanda Palmer, the musician who became famous as one-half of the Dresden Dolls, logged on to her computer and did something we all do but are loath to admit: She typed her name into the search engine. She calls it ego surfing.

The first listing was a link to a blog item that bitterly criticized her. The critic called her a fake communist. Whatever that is. Intrigued, Palmer then typed in “Hate A…” but before she could type Amanda Palmer the auto-fill completed the name: Amanda Todd.

Palmer had never heard of her, and assumed it was some sort of celebrity who would typically draw the ire of Internet trolls. But she Googled the name and found out that Amanda Todd was a 15-year-old girl from British Columbia who killed herself last fall after being relentlessly bullied.

Palmer searched some more and found a video that Todd made, using flash cards to articulate the loneliness and despair she felt. It kicked Palmer in the gut, because it reminded her of a video she had made, employing the same flash-card device. The difference is that Palmer’s video was art; Todd’s was a cry for help that went viral on YouTube after she committed suicide.

When she was growing up in Lexington, Palmer was the artistic and eccentric type — a younger version of what she is today — and she got bullied.

“But when I got home, it was over,” she said. “There was no one harassing me on Facebook, or sending me hateful text messages.”

The Internet and social media are tools that bullies use so that victims have no respite, no downtime. But like a lot of artists, Palmer thinks counterintuitively.

“The beautiful paradox of the Internet is that we are looking at the symptom and the cure at the same time,” she said.

So she put it out there on her blog, www.amandapalmer.net/blog. Who’s been bullied?

“I want to hear your stories,” she wrote, “and more importantly: your coping mechanisms.”

She could not have imagined the response. Hundreds and hundreds. Many were from victims of bullying, but even more were from strangers offering a kind word to those who revealed their torture. A young woman named Shannon wrote about being harassed in high school by a boy named Austin. He made remarks about her weight, her haircut, her makeup. At lunch, he called her a cow. He would purposely bump into her and say it wouldn’t have happened if she wasn’t so fat.

Then, one day, Shannon found out that Austin had killed himself. She went home and cried for the boy she had hated. She began to believe that Austin had bullied others because he had his own problems. She regretted that she never had a real conversation with him.

“When I would get those mean messages online, I would instantly retaliate with something equally terrible and soul-crushing,” Shannon wrote. “After Austin, I didn’t do that.”

If Palmer’s blog became something of a virtual therapy session, she knew that some of the people writing needed professional help beyond an online support group. Palmer tweeted out a suicide hotline number, and a high school girl saw it by chance. The girl sent Palmer a tweet thanking her, saying she saw the number at a moment she was contemplating suicide. The girl’s tweet to Palmer triggered tweets from others with words of encouragement, phone numbers for professional help, even songs to listen to.

This has all proved Amanda Palmer’s thesis, that a cyberspace infected by mean-spirited trolls is peopled by greater numbers of those who traffic in empathy, phone numbers, and good music.

“This to me is the only way out,” Palmer said. “You can enact policies and school the teachers and make laws but nothing will fix the problem except people talking to each other and being compassionate.”

…and seriously, give yourselves a little round of applause.

you did this. my blog did not do this. what you wrote did this. 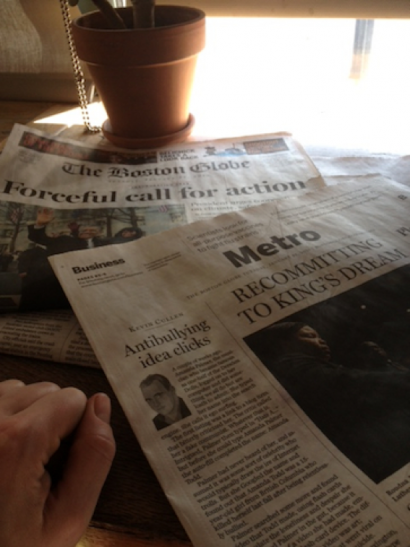 i also love that we’re in good company in the paper.
obama on the front page and martin luther king to our right.

to hear a president speak these actual words and hear the roar of the crowd….man. i am so fucking proud to be an american in moments like this.
and all these things, they’re all so so so connected. this moment in history, our commitment to listening to and taking care of each other.

do you feel that?

we know it: the journey is never complete. is always difficult. is always confusing.

we walk it, together.

and goddamn….it’s a fucking trip i wouldn’t miss for the world.

in our own little corner of the world, of the internet, we’re making a beautiful noise – and the sound is carrying. 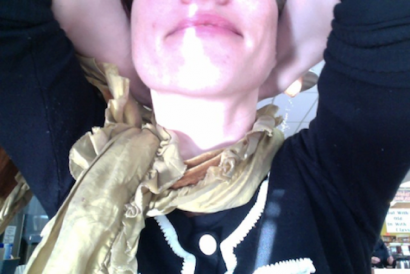 several sorts of snowflakes (…a letter from amanda todd’s mom, to us).

on internet hatred: please inquire within.