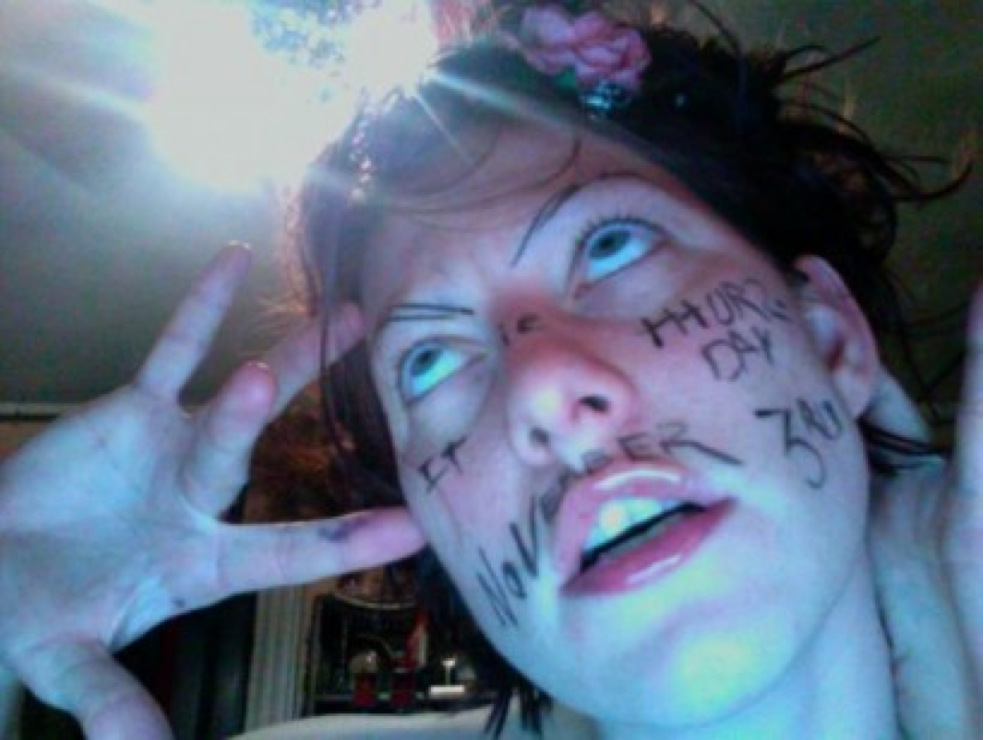 it is thursday, december 3rd. 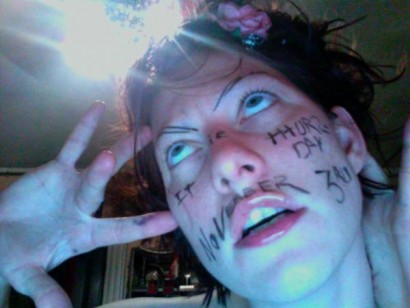 sean’s note: amanda may have a “blog-fairy” but she’s yet to get a “photoshop the sharpie’d incorrect dates off my face so that she doesn’t make public spectacles of how tired she is” fairy…yet. i have a feeling she’s going to have me look into this.

Beth’s note:  I called Amanda to tell her that it’s actually December, and she replied that she “doesn’t believe in months, she only believes in John Lennon.”

jesus what a day yo. seventy degrees in boston in december. the polar bears up there are strapping themselves into little pods and heading to better climates.
like mars, and points further west (or east, depending where your sunset is). FUCK man. i spent most of the day doing manic apartment cleaning and behind the machine,
listening to mahler and other choice tidbits.

i have been flattening my old posters! i have been throwing out old notebooks!
you can SEE parts of my floor!!!! 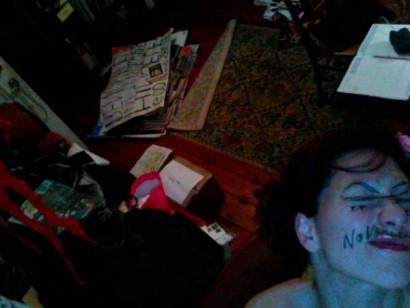 first of all, regarding THE (ACTUAL) NEWS blog…

damn, more than 400+ comments and counting.
i have a SHITton to say and respond to regarding the “news” blog. so many people seem to have the same lines of thinking and it’s gotten my brain on some paths i never thought it would tread upon.
many, many thoughts, composing slowly. so many of your comments are so wise and intelligent and sometimes i feel like your colletive ideas and poetry dwarf my actual blog. but there you have it,
i love that so many people can weigh in on one topic and you’ll get a collection of thoughts together in one place that you will never get again. it’s amazing. so more on that later. right now, i gots to run to dinner but the day could not go by without an awesome collection of the days NEWS…..

if you haven’t weighed in: do. HERE.

the AWESOME karaoke verité video i made for the new tegan and sara song “hell” is NOW ONLINE!!!!
it was posted today by both spin.com and gothamist.com and we’ve added it to the AFP youtube channel.

i filmed it the day before the burlington vermont show, while i was practicing with nervous cabaret in preparation for the tour (the one i just finished).

it was me, michael fucking pope my film and video hero, his camera, my ipod, a bunch of new yorkers, 4 hours, and one bad-ass song.

also thanks to ali and josh for letting me use their apartment (and cat) in park slope.

….i got the idea brewing when i saw some footage of tegan intro-ing the song at town hall in NYC a few months ago and talking about how she would pass all these homeless people in her new neighborhood in vancouver and feel that awful feeling you feel of frustration and hopelessness. i worked from there. some of the best things that happened never made it onto film, i wish you could have seen what i saw that day. it felt really good to run through the city at the top of my lungs, with an actual excuse that was (relatively) sane. i always feel like doing that. but i rarely have a reason. and there you go.

i sent it to tegan and sara….sara loved it, haven’t heard from tegan yet. YAY.

i’m going to do a special friday night (#LOFNOTC!!!) WEBCAST TOMORROW! PARTY ON THE INTERNET, BABY! beth is coming up! wine!!! song! STUFF!!!!
it’s always a crazy mess but from what we’ve got planned we’re going to

-show you and sell&send a bunch of pretty pretty AFP christmas cards (dead body and chrsitmas tree and personalization included)!
-give away a copy of neil’s “absolute death” collection that just came out, what i wrote the intro to
-do other weird random shit, probably dig up some stuff to auction
-and if i get my act together i’ll play you a new song on piano, maybe…take a few requests, questions, make some prank pizza calls.

anarchy, pretty much. hopefully we will entertain your asses.
i might also try to lure my housemate mali up to play a song.

we’re going to kick off at around 11pm est.

oh! and don’t fret, if you can’t make the webcast, you can order the holiday card HERE, RIGHT NOW, for the next 24 hours.  we’ll stop taking orders after the webcast finishes so i have time to personalize all your cards.  or, if you’d rather, the cards are FREE with an order of $75 to our webstore.

earlier today i stopped by symphony hall and worked out more of the setlist. fuck this show is going to be EPIC!
JUST as i was coming in the door they’d gotten the big vinyl banner ads for the show….i snapped a picture….
that security guys is checking me OUT.

the awesome photo in the photo is by ron nordin: 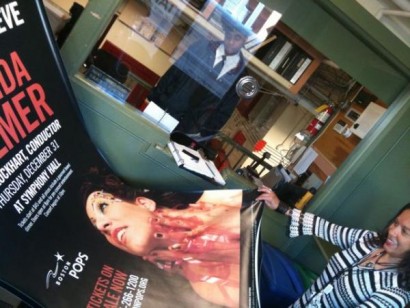 keith lockhart was in his office next door and i got to spy-watch him all alone, through the blinds, practice-conducting a choral thing he’s got coming up. sometime my life is so rad.

there will be CONFETTI CANONS!!!!! i demanded.
regarding the SET and the song choices…you can weigh in, there’s still a LITTLE bit of time…and we haven’t 100% finalized the setlist, so go HERE and throw in your two cents if you have a strong opinion about “space oddity” vs. “life on mars” and other such things. 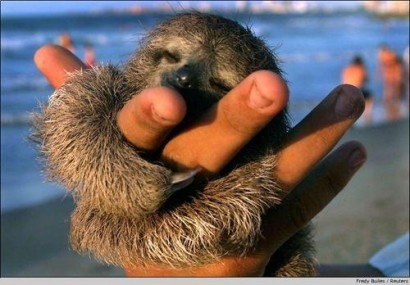