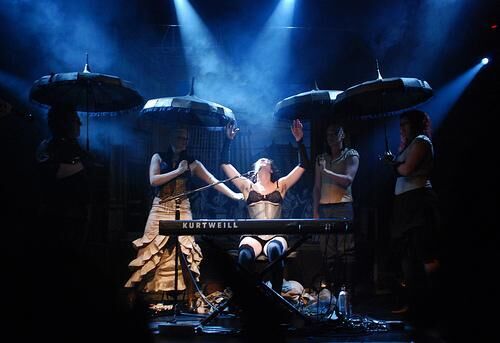 first of all…thank you to all of you who have emailed steven….he got over FOUR HUNDRED emails the day that blog and mailer went out re: food and lodging.
omg, so much food and lodging. THANK YOU guys. we really, really appreciate it. we need you. you’re helping us, a lot.

meanwhile…..
WTF.
the last week of my life has been trying: it’s been like some evil deity out there is putting me to the fester test.
i imagine this deity being like the fucking evil oz witch. the green one. 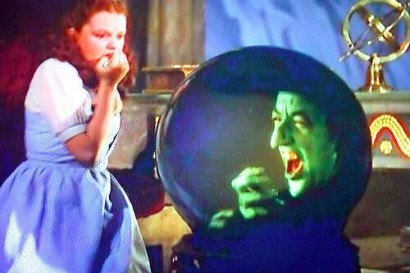 she’s looking at me at a few weeks ago, as i sit in my apartment in boston, gazing out at me from her spangly crystal ball.

“ah HA! my pretty!!!! think you’re so fucking ZEN and happy, mmmm?
going off on your little solo tour with all your little arty friends?? mm? mMMMMM?????”

she then takes out a little bag of powdered evil and starts sprinkling catastrophe on me, day by day.

a bunch of people who worked on the record come chasing after me for imaginary money that i don’t have.
brian decided to post – via youtube comment, god that hurt – that the band was breaking up, when we hadn’t agreed to that at all.
my tour manager quit, in a fit of overwhelmed exhaustion, after only 4 days of touring.
we don’t have any wireless on the bus (no, believe me, it’s hell).
then my foot got run over by a car in belfast.
and i won’t even START in on the music industry. i give up. wait, i don’t. i just give up on THEM.
it’s me and y’all against the world, honeys.

all of this in about a weeks’ time, and i am – miraculously – still in a relatively decent mood.
how is this fucking possible? am i finally enlightened? is it because i’m in love? is it because i don’t care anymore?

i think it’s possible because the shows have reminded me that what i’m doing fundamentally WORKS, and that all the rest is just noise.

to be able to get on stage with my friends and make people FEEL – this is the point.
all the rest is bullshit.
and we’re doing it every night. and we’re all taking care of each other. no drama. just work. just love. it’s amazing.
and the rest of the problems sort themselves out.
and if they don’t?
the world doesn’t end.
as beth says: nobody dies.

laura showed up for tour the other day (she was few days late because she was doing merch for the michael franti tour).
she saw me hobbling down the stairs of the bus in my pathetic cast and she looked at me mystified and said: why do you look so HAPPY?

i just am. i’m happy to be here, around all these people, in my fucked-up wonderful situation with my fucked up fucking foot.
it’s life-like. i don’t feel the burden.

i think i’m still high from the opening night in dublin: 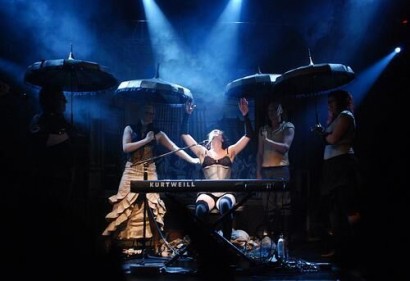 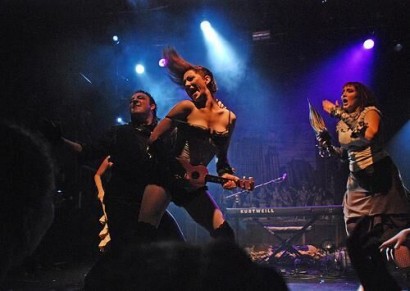 plus, small things are making me insanely gratified.
i was eating in my bunk the other day. i’ve had a hard time moving around with my crutches and someone had kindly brought me a little salad.
this salad had beans and vegetable and orzo (those little flattened-football-shaped-pasta-things that also come in rice pilaf) in it. 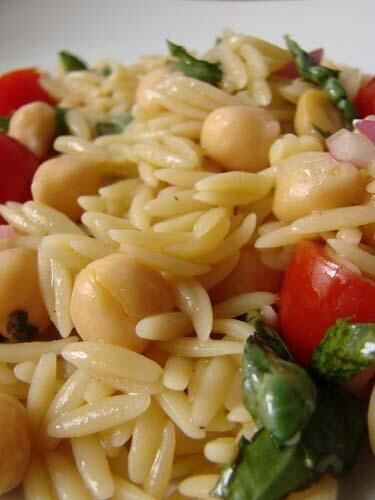 and it was delicious. and i was negotiating eating in in a tour bunk that’s only about 13 inches high (hard, when you think about it) and a little piece of orzo fell on my shirt and THAT’S WHEN I REALIZED that ONE PIECE OF ORZO HAS THE EXACT SAME DIMENSIONS AS THE STEM ON THE MAC LOGO.
this was Important.
so i took a picture of it…. 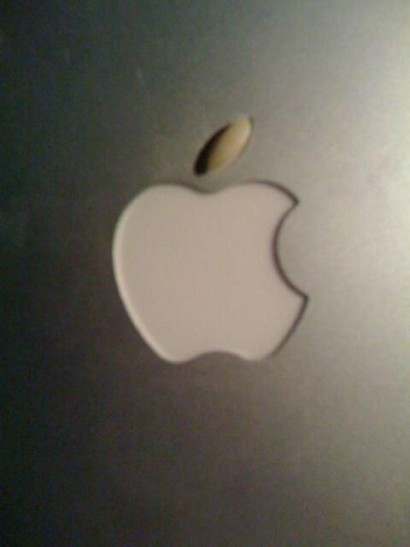 ….and that got me through the day.
i swear. it made me so fucking happy.

i also spent 3 days staying at The Most Wonderful House in Edinburgh. Many of you might remember my dentist story from when i broke my tooth beat-boxing many moons ago.
well, that miraculous dentist, chris cunningham, and his miraculous wife, mary, and their awesome kids, sam and rosie, have become like a second family to me in scotland.
jason and i slept over there while the tour parked in edinburgh and mary made us endless cups of tea and there was much music and singing and eating and i never wanted to leave.
eventually we had to. the whole family (minus mary) came to the glasgow show after we left edinburgh. for the encore, steven from the danger ensemble chopped off sam’s 6-year-long dreadlocks while i played “hallelujah”.
his dad totally lost it sobbing and trying to record the thing on the family videocamera. it was heaven.

for both scotland gigs, we had SIX horn players join me on stage for “leeds united” and in glasgow they joined me & jason & zoë for an improvised jam session on “living on a prayer” while we passed the hat around the venue to collect money for the danger ensemble. it’s feeling like family, more and more every day.

i wrote a little bit about my accident in the intro blog but i’ll go into some more detail because Why Not…..
it was the day after our first show (dublin) and tora and i were breakfast-hunting in belfast, about 3 blocks from the bus.
i stepped into the street without looking right. the cars come from the right. not from the left. from the right. i know this. i just fucked up.
contrary to the newspaper reports, i wasn’t on my iPhone (i’m getting so many angry emails from my loved ones about that). no. i was just dumb.

the car’s right front left wheel drove over my right foot and my upper body slammed against the hood of the car, then i fell backwards into tora’s arms – and i twisted around and clutched her for dear life.
i felt no pain – just shock – and i knew that something very, very bad had happened. i had seen my foot go under the wheel. i didn’t want to look.
the girl who had been driving, a sweet 20-year old irish lass named sam, jumped out of the car (with her mum, who was with her) to assess.
there was a quick ambulance vs. car discussion and we decided to pile me into the passenger seat. we drove to belfast city hospital.

my thoughts, during the drive, started to snowball into a combination of total self-deprecation and oh-no-will-i-have-to-cancel-anything.
my teeth got chattery and i got all shaky-like and cried here and there. tora kept holding my hand. i was so glad she was there. she’s wonderful.

they put me in a wheelchair at the emergency room gates.

tora took this with my iphone, it was nice and distracting to do a small photoshoot while waiting…. 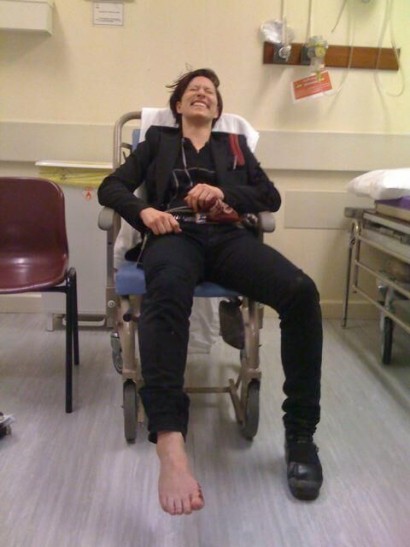 and they wheeled me into a tema of nurses, one of whom looked at my foot and remarked, in her CHARMING irish accent:
“eh. it’s just a wee bit squished.”

that did not make me feel better.
they x-rayed me. they told me i had broken one big toe and fractured three metatarsals, which are the feet-y bones that attach to the toes. 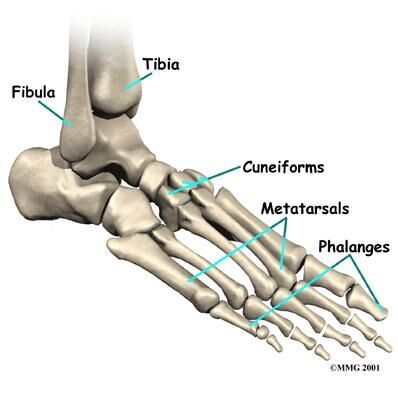 while we waited, i took this picture of tora making her best “worried” face….. 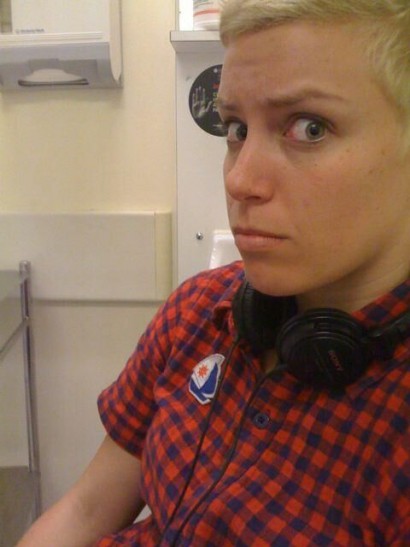 ….and here’s an ugly daffodil that was on the wall of the hospital….
(i was really, really trying to keep my mind of the pain…by any means possible)…. 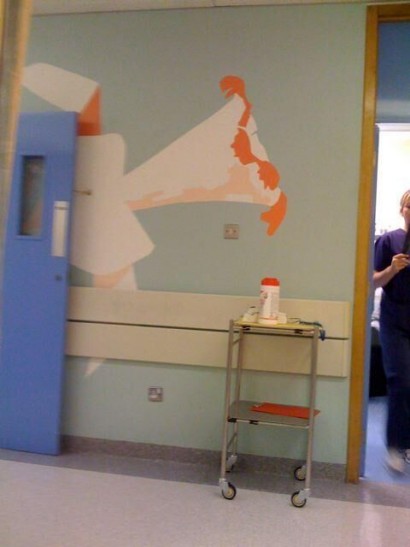 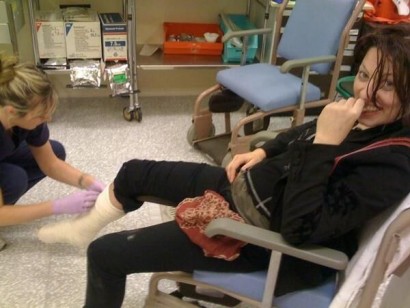 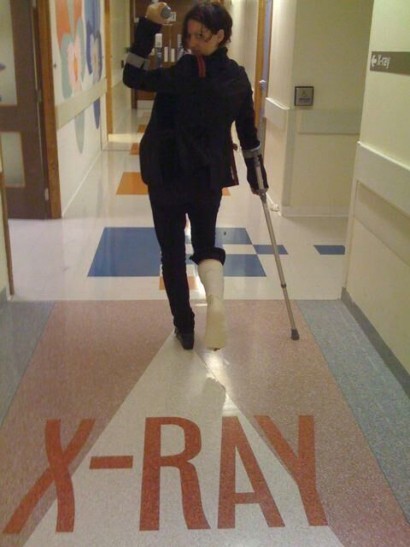 we drove the police station with our new-found friends (sam and her mum) and filled out an accident report.
and then we went straight to the green in front of city hall, where i was in a state of mild delerium but still managed to act human during an all-ages gathering that me & jason were holding there.

upon arrival, the belfast police told us that it was ILLEGAL to gather in groups of more than 12 or play any instruments.
so we tried to divide up the group into SMALLER groups of twelve people and scatter them around for a small tag-team series of a capella songs, but they WEREN’T HAVNG IT, the fuckers. so they kicked us out. we went to outside of the gate of the green, and we had a little hootenany out there.
we managed to totally fuck with the police by having the danger ensemble re-enter the park behind us, and do some TECHNICALLY LEGAL wack-ass performance art with umbrella-ellas in the park …
here’s some shaky footage: http://uk.youtube.com/watch?v=BKTsNnIWLOI&fmt=18

life on the bus with one foot has been strange, but everyone’s been so helpful it’s almost been surreal. i can’t really move anywhere without help, and i can’t carry anything.
so i am simply at the mercy of other people…feeling like i am inside of a weird bubble. i’ve often had a problem with asking for help. but here i am. asking constantly. nothing to do about that. it’s nice.

here’s some from pix from edinburgh….

cradling my crippled self….. 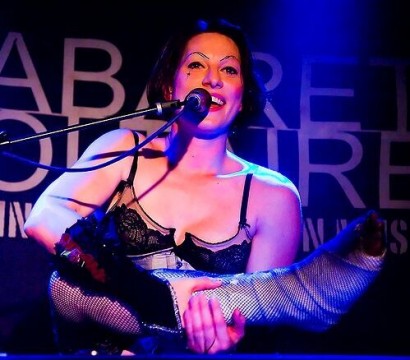 me & jason singing “living on a prayer”: 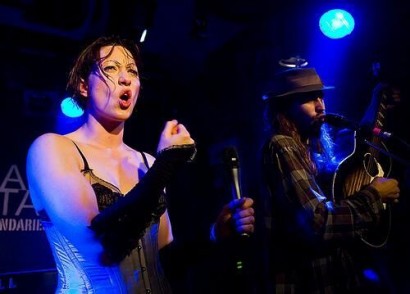 with zoë and lyndon…. 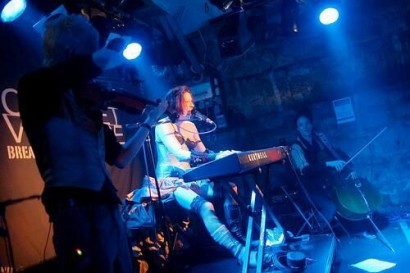 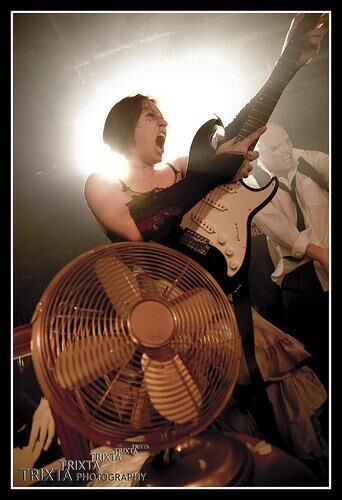 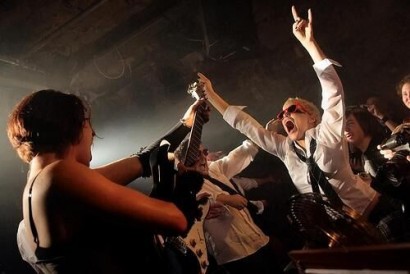 after tonight, to brighton.

this is a tree, not an ashtray.