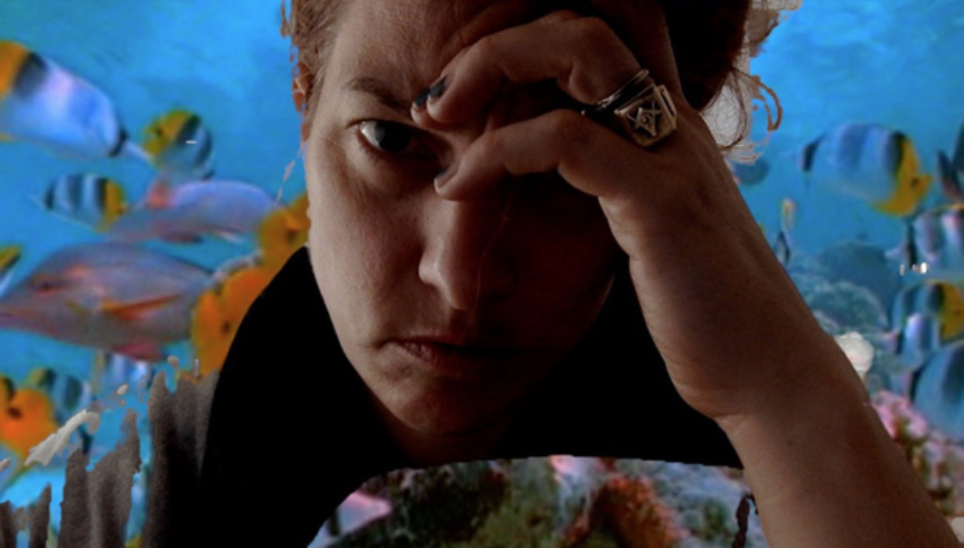 lower down in this post…UPCOMING SHOWS IN NEW YORK!! AND UPSTATE GOTH PARTY #2!!!!! scroll away…

i am a human fucking toast with jam. i am a dead fish floating. i have decided to use the fish background in photobooth to make myself feel a little better. 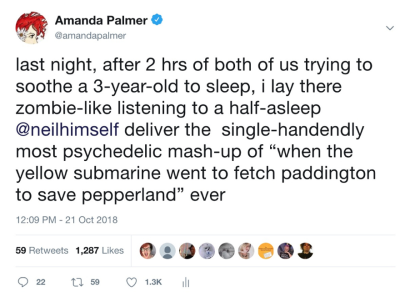 by a fish thread.

by a fish net.

did somebody say BUY A FISH NET??

SPEAKING OF THE DRESDEN DOLLS – I HOPE YOU LONDONERS ARE ALL PREPARING YOUR COSTUMES….ITS ONNNNNNNN

it’s time to switch gears…the first dresden dolls rehearsals begin about 24 hours after i land in london and that’s all the time i have to catch up, get more album approvals out the door, and catch up on my email (it’s become a joke at this point) before i strap myself into the rehearsal seat for the three shows.

some catch-up, and forgive me the bullet points and lack of flowery language; see fish note, above.

also: don’t worry about me. after these dolls shows i have a heavy chunk of time off to get my shit together. it’s been a relentless run the past month or so.

i’m empty. i wept on the plane over here reading the new york times. i’ve been avoiding the news for a week. maybe it was the altitude – but wait, we were grounded. i wept at the state of international affairs, at the news about Jamal Khashoggi. sometimes my brain just can’t take the horror.

then i read this opinion piece about why we should stop threatening to kill each other online by one of my environmental heroes, bill mckibben, and i wanted to weep even more. someday this year when i get the time i want to write a deeper piece, six years on, about what it did to me, permanently, to wake up every day to a personal-assault news feed, and what an atrocity the internet is and has become in so many ways. the more i think about it the more i become grateful for this blog, this patreon, this kind and reasonable corner of the internet. speaking of which, my reddit experiment, while listening to the album master, the other morning was fun. go look. the idea currently is to create a patron-only subreddit so the public doesn’t have access. thoughts?

the show in tucson was INCREDIBLE.

if you want a full setlist and recap, inculding tom making fun of my out-of-tune ukulele (THERE WERE REASONS) there’s a blog here by patron tom steiger: http://afpwestcoast.tumblr.com/

neil and i played a packed and beautiful show….my dad (jack) and sister (alyson) both guested, and we laughed and cried and sang our hearts out. the show was recorded in one fell swoop and i’ll try to bop you a recording…and we got a little bit of simple iphone video of the highlights care of my brother alex and his girlfriend shabnam. the song we did as a daughter-daughter-dad trio was heartbreaking, more on that later.

one of the the absolute best bits of the night was being joined on stage by alma hernandez ( find her on instragram/twitter: @almaforarizona ) – who grabbed the mic and talked about how incredibly important this upcoming election is. the battle for the senate seat in arizona is a SUPER IMPORTANT ONE, i hope to god you’re all voting, and if you want to have a little cry, watch the end of this debate between kyrsten and her opponent, martha mcsally, and just skip to the last question and closing statements. the reasonable, nice anchors ask a question about climate change – which is clearly super-important  to a state like arizona. kyrsetn gives her general stock “this is real, this is important” answer and marcha mcsally basically says: WHY ARE WE EVEN TALKING ABOUT THIS I LITERALLY REFUSE TALK ABOUT THIS.

it makes you wanna cry. i wanted to be like, lady: you won’t have a state to represent if you don’t address climate change. get with it.

so to see what i could do to help, i reached out to kyrsten sinema’s twitter feed and alma grabbed the chance – and she belw us away. she is the youngest rep-elect in the state of arizona – she’s 25!- and she told us the story of looking at the state of politics, quitting her job, and running for office. and winning.

she’s also the only jewish-latina politician in the hood. and she is the kind of shero that is busting above ground all over this country – it’s people like her who are gonna save us, folks.

here we are backstage with alma’s sister consuelo, who’s also running for school district. these women. this is what’s happening in america now. i am so goddamn proud of them. 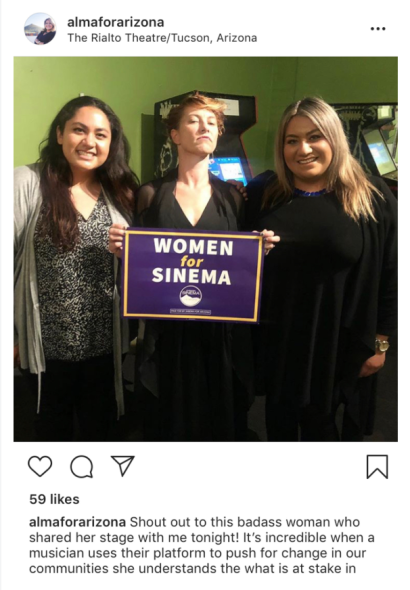 here’s me and my dad singing a cover of bob dylan’s THE TIMES THEY ARE A CHANGIN (i shit you not, yep, we went there, and it was brilliant) right after alma took the mic: 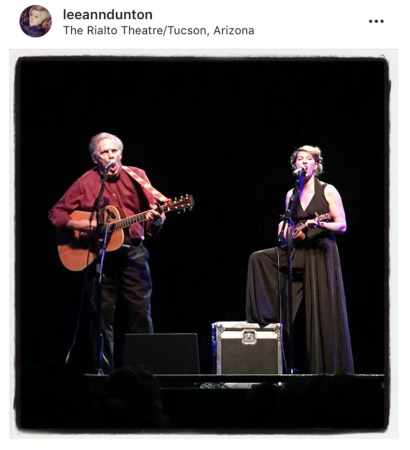 i haven’t found a treasure trove of photos – if you have any, send em on over to photos@amandapalmer.net. 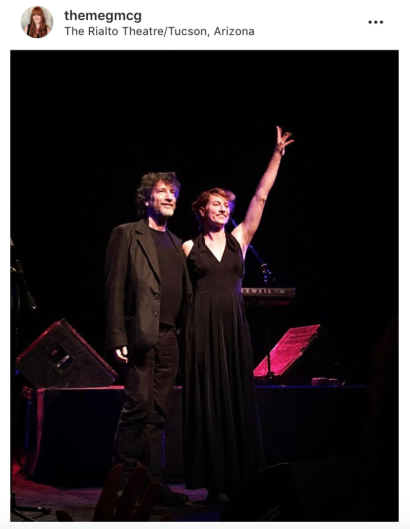 i’m gonna sound like a broken record and it may get annoying for those of you outside the states, but this election season is so so so so important.

IF YOU HAVEN’T MADE PLANS TO VOTE OR VOTE EARLY< DO IT.

it’s not too late to register in some states. if you’re confused about how or where to vote, DON’T BE. IT’S EASY. go here to find out more. you can plug in your zip code and it’ll all be a piece of cake. but YOU HAVE TO DO IT. and please put the pressure on your friends, your social media, everything you can possibly do. here info: https://www.rockthevote.org/ 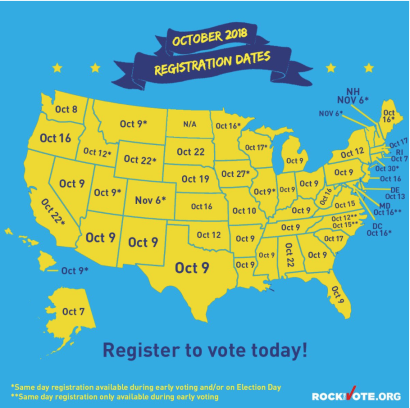 THE LAST MINUTE TUCSON PATRON AFTERPARTY WAS AMAZING!!! AND LOUD! AND CRAZYYYYYY. if anyone has photos, ffs, tweet them to me or tag me on instagram, i’d love to see some. it was…insane. i DID manage to find all the underage kids!! i’ll try to do some better organized versions of these parties when i hit the road for real in 2019 – that was a shitshow. but a fun shitshow. and massive thanks again to renee harper for grabbing the steering wheel and getting us all over there. the venue was SO NICE they even set up a signing table – but i didn’t want to do a boring “everybody get in line” signing, that defeated the purpose of cramming us all together. when there’s a line, nobody hangs out and it’s all about waiting for me.

so i ignored the table and just ran around and tried to cram hugging and mingling with people into just a half an hour and it was total delicious chaos – i hope everybody got to at least connect with one another. biggest regret: NO GROUP PHOTO. but we managed to take down that loud techno for at least 6 minutes, didn’t we?

please pray that it makes a return for the dresden dolls. dry climate, screaming at patron parties…it happens.

i wanted to thank patrons michelle, lisa, yvonne and cecy for gifting me art, fountain pens, more art, and bath bombs respectively. i love you guys and how generous you are with me….. 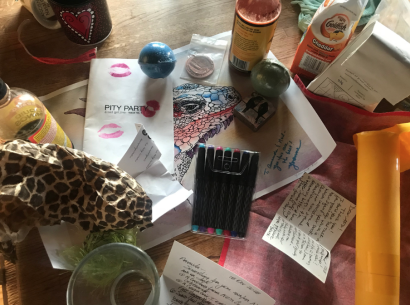 first of all: you MAY wanna save VOTING DAY: november 6th. i may pull a crazy and try to do a gig on VOTING NIGHT to just celebrate and encourage people to vote. stay tuned. may not happen, but.

you know who you are, upstate dancing goths. we had such a fucking blast last time we are doing it again. GOTH PARTY IN THE WOODS!!!!!

DJ MON AMIE is our DJ again and i’ve scored a great NYC band called WEEKNIGHT to be our live music act. the tickets will fly again so lease secure quickly! 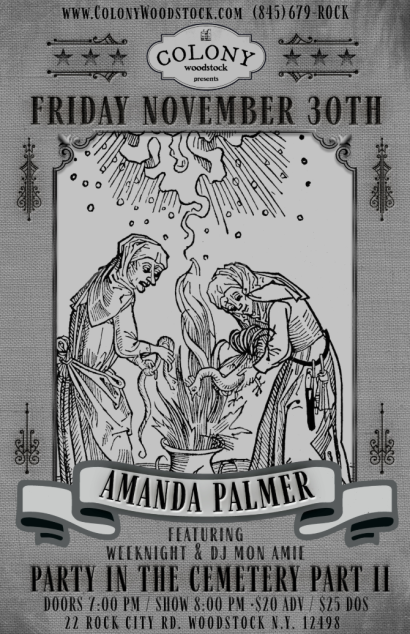 also, seriously stay tuned for the information about doing goth yoga in woodstock the next day (saturday, dec 1st). i’m not kidding – we have it planned. hangover tea, bauhaus songs, corpse pose, done.

this is like the 4th time cyndi has invited me to do this benefit and i am FINALLY in town to do it. regina spektor (one of my faves) will be there too, and natalie merchant, who’s an old hero and new friend of mine from upstate…it’s gonna be a really beautiful night. 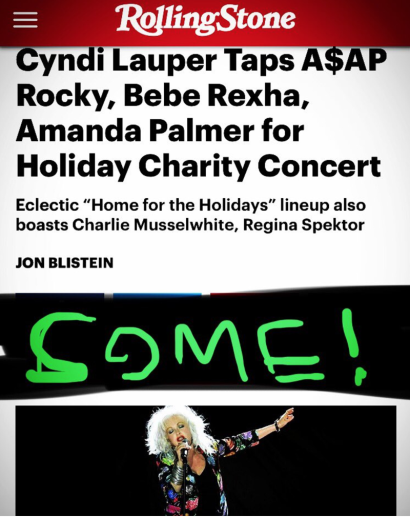 i think that’s all, my loves.

see you in london and beyondo

nobody knew i was a goth?

THE DRESDEN DOLLS have FOUR SHOWS THIS FALL.