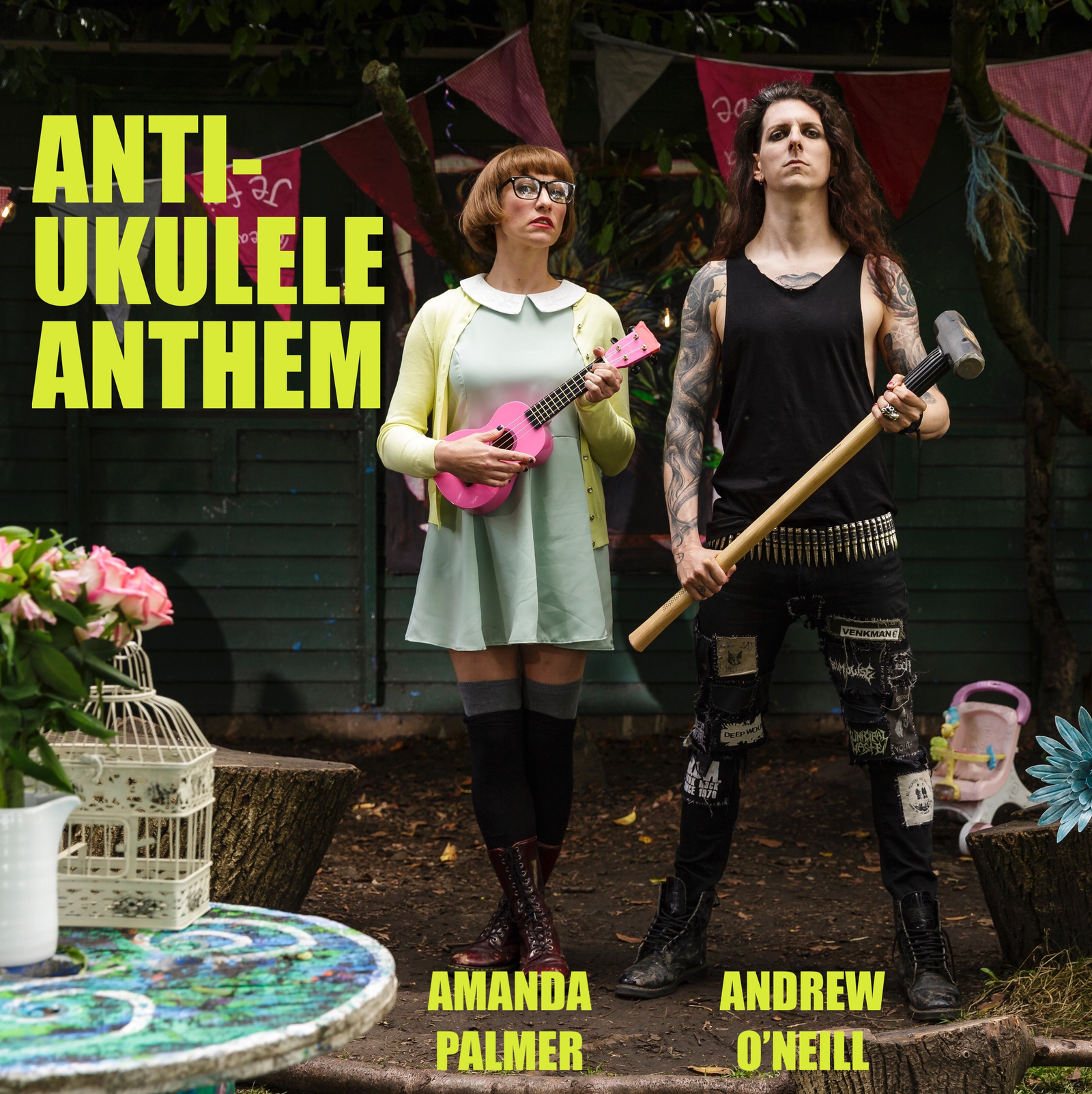 especially if you’re in america, i figured this is perfect timing for this Thing. it’s getting cold and shitty and everyone’s getting depressed and the midterm fever is over and everybody is just slogging through the slog of life and trying to survive and what better moment to hit you with

the lyrics and music were written by andrew o’neill, but it was, er, inspired by the ukulele anthem and also by all the uses of Our Holy Ukulele in terrible terrible corporate mind-sucking commercial culture. the recording was done over the summer: half in london (where andrew was) and i added my ukulele and vocal here in woodstock at applehead studios.  then andrew scripted the video, and we filmed it in the meadows in edinburgh this past august during fringe.

without further ado, here’s a link to watch the video (which is being hosted over on andrew o’neill’s youtube page):

no animals were actually harmed in the making of the video.

whether or not you agree with our, um, political stance, we hope you will enjoy the artfulness of the video, especially the animation. i also am very proud of my “hipster” look. i worked very hard to make me as annoying as possible. feedback welcome.

FOR THE PUBLIC & $1 patrons, if you want a download….here’s a link to stream and download the song on andrew’s bandcamp. it’s one pound (how twee):
https://andrewoneillcomedy.bandcamp.com/track/anti-ukukele-anthem-w-amanda-palmer

$3+ download patrons, stay tuned, you’ll be getting your free downloads as usual, watch for an email in just a second.

song was written and performed by andrew o’neill and amanda palmer.
song produced and mixed by James Megee at Wise Buddah Studios, London

Convincing you that they’re not cunts using twee ukulele songs

It doesn’t matter what they sell, it could be a ticket straight to hell

As long as the advert’s twee as fuck, with a hipster girl in a vintage frock

Or an animation of something cute, we’ll overlook the obvious truth:

You perpetuate the ongoing wholesale destruction of

Millions of innocent lives every day

You hold the poor to ransom

Yours is a war against basic human dignity

But that’s okay if the advert’s got 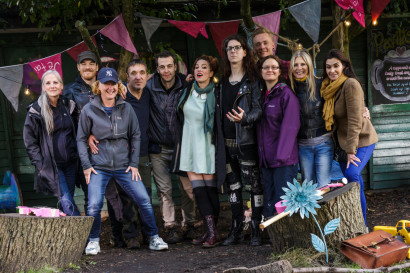 here are some words from the video team:

I wrote this song about a year ago after being repeatedly disgusted by corporate adverts using ukulele to lend a sort of twee homeliness to their globalist environment-destroying, animal-slaughtering businesses. When introducing it I tell the crowd there are only two people who play the ukulele who don’t make me want to kill them: Amanda Palmer and Howard Read. Happily I then got them both involved in making this! Amanda on vocals, uke and ditzy hipster acting, Howard animated our squirrel!

This was the email subject that popped into my inbox along with the question, “are you available and up for it?”

The sender was Andrew O’Neill and his request outlined, very briefly, his intention to film a music video with Amanda Palmer.

How random.  I love random. So, I emailed back, ‘indeed I am up for it!  Give me a buzz to discuss’.  Not sure it would go any further.

But it did and whilst traveling to London in a crew van, Andrew O’Neill called me.  Now, you know you’re on to something special when you come off a phone call with someone you’ve never met before – and you realise you’ve just had the loveliest, most funny and charming of conversations – with a total stranger.

That was it, the start of a really special production that happened in Edinburgh amongst the hectic chaos of the Festival this summer.

It brought together an amazing bunch of creative people in a short space of time to film the music video for Andrew’s Anti-Ukulele song.

It’s catchy.  It sounds so sweet and bouncy.  But the lyrics nail the point so well. I really wanted to make sure the visuals did the song justice and supported the message.

We set about finding a location.  The place we found was perfect.  It was the last one on my list the day I went out scouting.  A little cafe on The Meadows, it had a play area at the back just banging with character.  Not only that, the cafe owner happened to be a big fan of Amanda Palmer – and the icing on the cake – terrific vegetarian and vegan food and smashing coffee.

Visually it hit the vibe for Andrew and the DOP, Dave Tarvit.

The scene was set.  But would the weather play fair?  Leading up to the shoot, it was awful.  Pouring rain, dismal low light, murky – what we Scots’ call ‘pea soup’.  Not what we needed.  We had a back up plan with an alternative location but all our production fingers were crossed that we could go with our first choice.

The day came.  The weather goddesses were on our side.  The rain stopped.  The light was gorgeous. The shoot went forward as planned.  The crew was fantastic.  The ukuleles were tuned to perfection by one the loveliest of souls, Michael.  And Amanda and Andrew were spectacular.

What a day. What a bunch.

So be open to random, because sometimes that’s from where life’s most fabulous and interesting experiences blossom.

Andrew asked me to animate the critter in the Anti-Ukulele song partly because he likes my animation and partly because I’m also a comic, and one of the only people he approves of that plays the ukulele. The other is Amanda. While I animated this I played a cabaret gig which was only for performers who play the Uke. It wasn’t for an evil multi-national, so I think I got away with it.

The design of the squirrel (his name is Horsebox Granola) started off much fluffier, and as a rabbit. He was too fluffy and cute. When I emailed the drawing to Andrew he simply replied “God no.” He got sworn at for that. Draft two was a fox, but only because I’m rubbish at drawing squirrels. 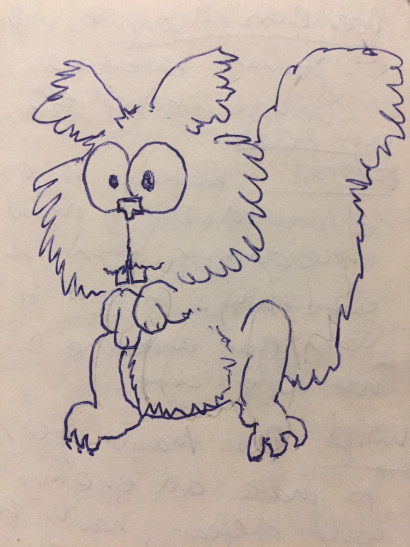 Horsebox Granola was built as a motion capture puppet. When he blinks it’s me blinking. 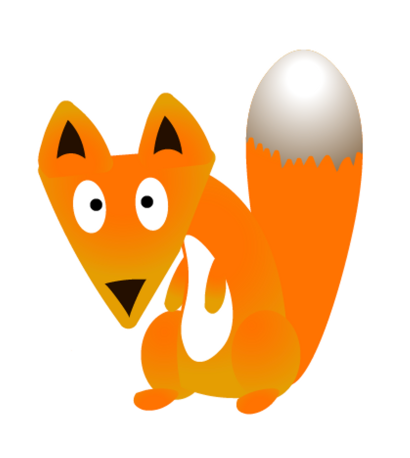 Working with Andrew and Amanda was just as supercool as you’d think. They were total pros on a shoot that we turned around in only 48 hours from location recce to wrap, thanks also to a fantastic crew.

The energy of the Edinburgh festival was obviously infectious but thank goodness the Scottish summer weather was kind.

Cutting the film was a blast. As anyone who’s seen her knows, Amanda is a natural actor. The camera caught expressions I hadn’t noticed shooting but made me chuckle in the edit.

Hats off to Andrew. He directed it brilliantly and smashed the ukuleles in one take!

Wardrobe and makeup did a great job of turning Amanda into the Anti-Amanda. I hardly recognised her when she pitched up on location.

watch the video first before scrolling through the behind the scenes photos below, because: spoilers.

all photos below taken on set by photographer peter bajor. 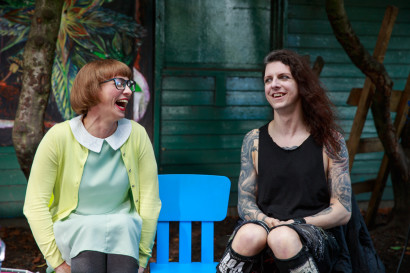 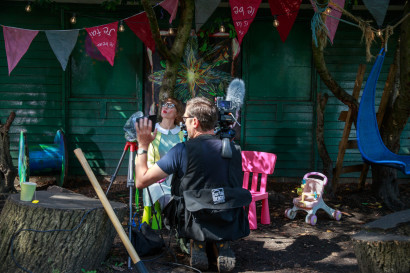 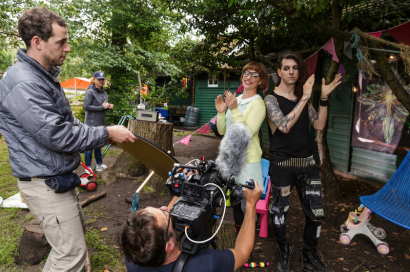 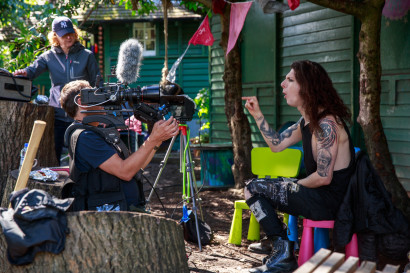 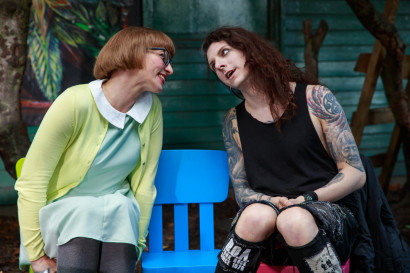 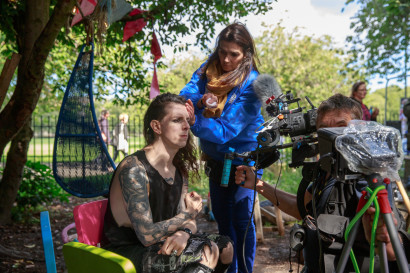 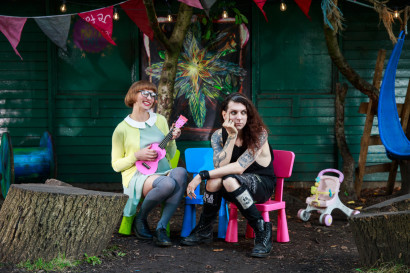 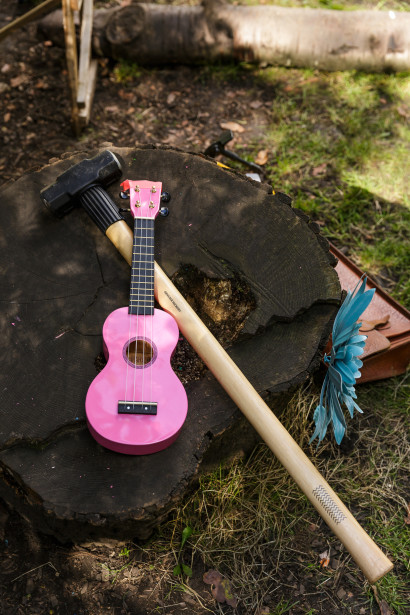 AND LASTLY…..THANK YOU FOR BEING MY PATRONS – AT ALL LEVELS – AND MAKING THIS KIND OF BIZARRO COLLABORATION POSSIBLE.

art doesn’t happen without money. it just doesn’t. this video and recording cost a lot of dough, time, energy, and without these patreon resources, we simply would not have made it. and look at that crew photo. all those people – and many others beside…the sound engineers, the animators, etc – ALL GOT TO DO THIS CRAZY PROJECT and GET PAID because of your contribution to this patreon.

don’t forget it, folks. this sort of stuff doesn’t really “make a profit” on youtube, and the budgets could come from no other place. they come from YOU. you you you.

thank you for giving us your monies, so we can be this weird and random.

p.s. and, of course, the never ending as always signature, below. if you’ve seen me post this and just kind of view it as wallpaper, give it a good read now as a refresher. the most important thing is line #5, if you ever have any urgent questions (like if you need a refund on patreon) or if you need help accessing a download or whatever, that’s the best place to reach me and the team.