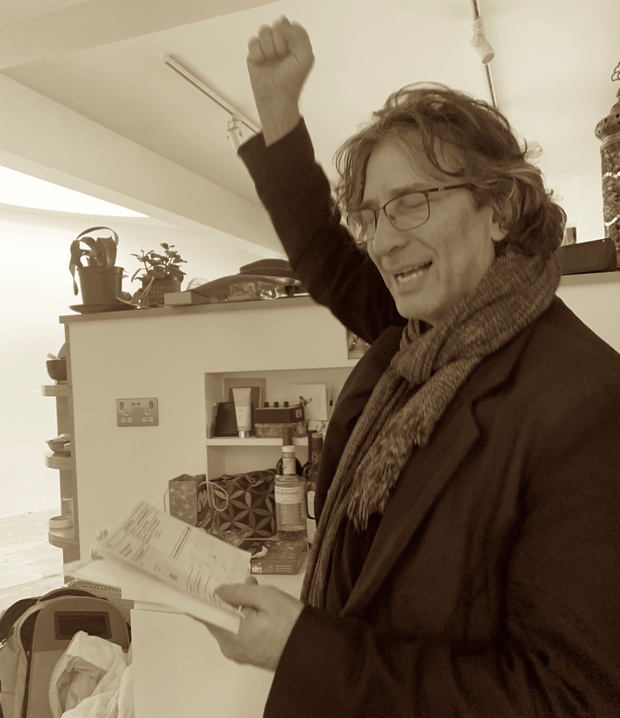 TL;DR!!!: everybody in the UK should vote tomorrow, the world is strangely circular, and i made a political polka song by accident with brian eno on sunday, which you can listen to here: https://youtu.be/tKNMzjE7L7E

neil came back from a long writing retreat trip today and i took this snapshot of him opening the mail that was waiting for him.

tomorrow is VOTING DAY in the UK and the politics here are are as messy, divided, frustrating and as – dare i say – bleak as they are in the US of A.

since neil has had an american greencard since the 90s, he mostly hasn’t been able to vote in his adopted country or his homeland. you can’t vote in the US if you’re not a citizen (and he’s not a citizen, and he’s never wanted to be one) … but his ability to vote in the UK was also eventually taken away (because after living in the states for fifteen years, because he wasn’t a resident of the UK and they take away your right to vote, which seems bananas to me, but there we go).

but this year, because he’s been back in the UK for long enough (and paying UK taxes again), something switched the flick and he’s able to vote here tomorrow.  the polling station is, poetically, at the local synagogue near our london joint, and neil is so excited to go vote tomorrow…

i understand this feeling. every time i stand at the polls in america, or cast a postal vote because i’m touring overseas, i feel a kind of connectedness to the universe – to my little community and to the whole world – that is hard to explain but incredibly powerful. it means we’re Doing the Thing Together. it means i have a voice, even if that voice is a tiny fraction of a whole, one of millions.

meanwhile….i was invited over to brian eno’s house for lunch on sunday.

BRIAN ENO IS MY HERO. his album “taking tiger mountain” was one of my most played cassettes of 1991. (go listen to it, it stands up).

now i know that brian eno is also, in addition to being a great polymath writer producer artist weirdo, a really nice guy. he’s just really….nice. and he cares a lot about the world.

there are so many brian enos: the glam guy from roxy music, the producer of the joshua tree, the producer of fucking eight million other amazing things, the composer of “music for airports”, the creator of the oblique strategies cards, the subject of a 33 1/3 book written by my old cloud club housemate geeta (who’s on patreon)….and most recently, one of the musicians/creators who is deeply invested in figuring out how musicians can use their powers for good to combat climate change. i met brian for the first time a few weeks ago at a little meeting he held in london for musicians who were interesting in helping him with that sort of work.

then, boom, this sunday he invited me voer for lunch, and i brought jason webley who was just in town for a godfather/fun visit, and jherek bischoff, who’s in town to make music for neil’s ocean at the end of the lane play, and brian was like:

“i need to record this song today. it’s gotta get out before the vote on thursday. want to do it with me?”

and i was like: you are a man after my own fucking heart.

and we were all like RANDOM SONG TIME? HELL YES.

and we cleared the lunch dishes and went into his little studio and learned, arranged, rehearsed and recorded the song in less than 3 hours.

$3 patrons….i’m going to send you the mp3 as a download. watch for it

it’s on neil’s channel because….we thought that would be funny. because, y’know…he’s british and all that. 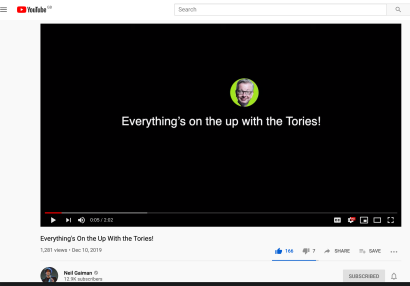 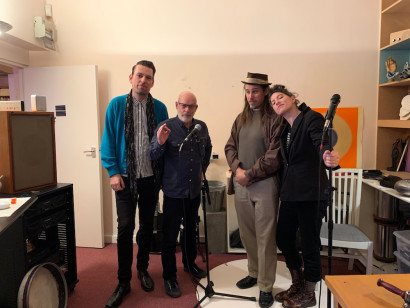 here i am, playing the kazoo. i nailed it! 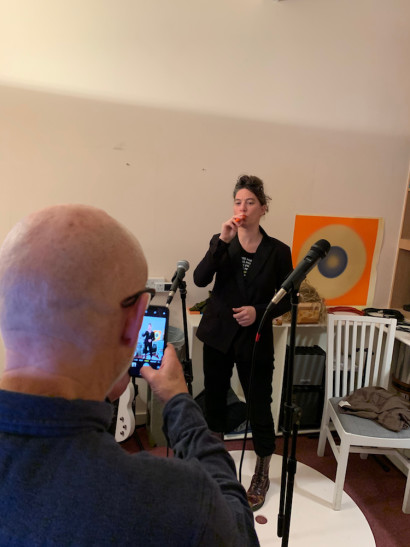 Everything’s on the UP with the Tories
With unemployed across all categories
There’s Johnson, Gove, Patel, it’s a government from Hell!
And a few more years of Brexit purgatory

Everything’s on the up with the Righties
Who worship at the feet of Trump Almighty
There’s people in the street without a bloody crust to eat
But everything’s on the up for the Tories
If you’re Eton, Winchester or Harrow
The road to the future, though narrow
leads, like a well aimed arrow,
right to the bottom of the barrel

We’re scraping the bottom of the barrel!!
Everything’s on the UP with the Tories
their red-tops farting out more made-up stories,
they’re proudly on the wrong side of history

now everybody in the UK, i know you can hear me.

don’t take your voice for granted. 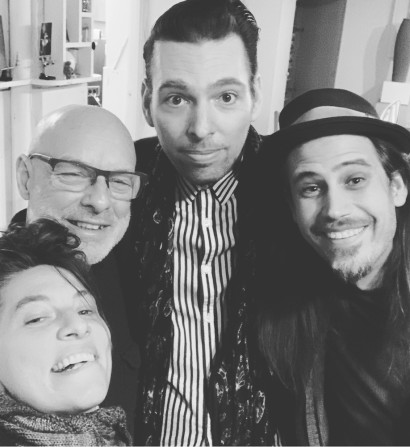 p.s. don’t forget i am STREAMING BOTH LONDON SHOWS this weekend! 6:30 london time for patrons only. all info is here.

p.p.s. don’t forget JHEREK IS ON PATREON! he’s up to 400 people, his work is going so beautifully and i’m so proud of him. join here: https://www.patreon.com/jherekbischoff/posts

a song about abortion called “voicemail for jill”. {official thing}