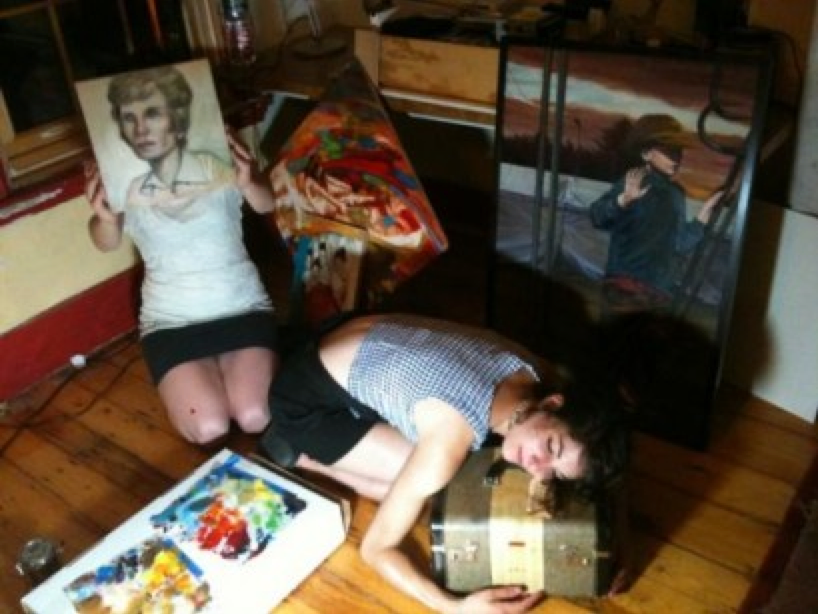 July 18, 2010
today was the day i needed to paint the 7 ukuleles for the uber-fancy packages that are going on sale tuesday. (wanna know when? mailer. here. go.)
i was going to do it during day-time hours with painterly light flooding into my apartment, but casey (who’s been staying at the house) told me that meghan was coming over and they were going to have an oil-painting party next door in one of the empty apartments of the cloud club. so instead i caught up on email all day, drove down to plymouth for dinner with my folks (THANK YOU all the people who twittered me suggestions – we ended up at 14 union street, and it was fabulous & perfect) and came home at around 10pm to start the Mojito Painting Party.
casey bought the mojito-makings. we muddled mint like mad. and we were ready to go.
casey & meghan had already been painting for a couple of hours when i showed up, and i made them pose with their respective projects….
(that’s meghan hiding on the left behind her grandmother, and casey is nesting on the right in front of an amazing little boy she made): 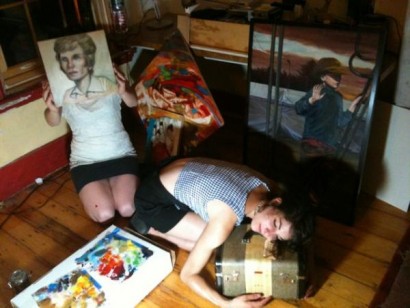 as you can see, they’re both unbeilevably talented fucking painters…holy shit, eh?(casey’s site is http://www.cassandralong.net btw)
we painted quietly for a while, but after an hour or so noah and steve came up and brought BEER, which meant it was then not quiet.
then i managed to rope casey & meghan into priming ukuleles for me & painting on base-colors and things, which was probably for the best according to casey because she’d had too many mojitos to want to touch her own paintings.
noah & steve made us laugh and noah took some photos with his old old fashioned camera and grabbed some video.
each ukulele took a little under an hour and i’m REALLY fucking happy with them. i’ll take more photos tomorrow in the light.
this was one inspired by “fake plastic trees”…. 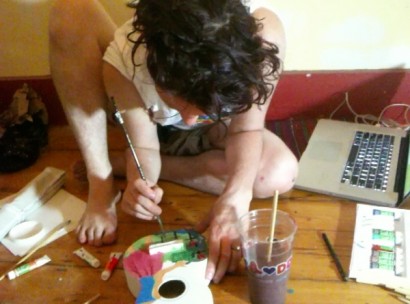 i wasn’t sure what i was going to do, and i wound up working mostly from images inspired by the lyrics from the radiohead songs that are on the record….
for instance,
DON’T LEAVE ME. 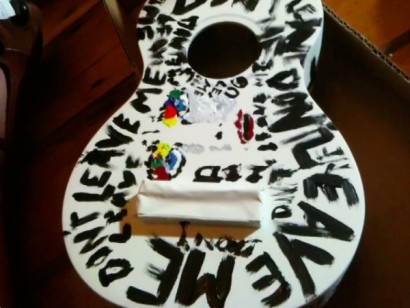 i also painted thom yorke begin eaten by flames, lazy eye and all.
that was fun. and etched a spine into the side of one ukulele.
they’re all different and i’m very proud. 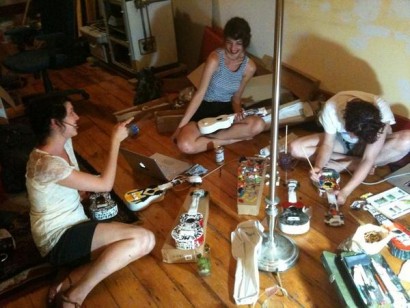 casey decided to apply acrylic paint to her face: 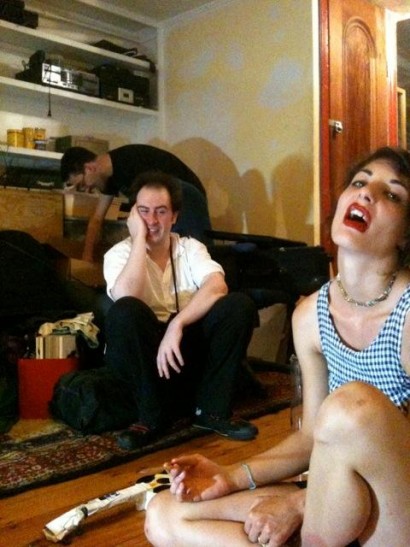 noah was amused.
she never removed it, and it was hard to take her seriously for the rest of the night.
steve was looking for tools.
i wore my double rainbow shirt of course, and we used the towel that casey is smelling to wipe up a few spilled mojitos, and casey had bought this really suspicious coconut rum, which meant the towel smelled like lip balm, which we thought made it a really delicious towel: 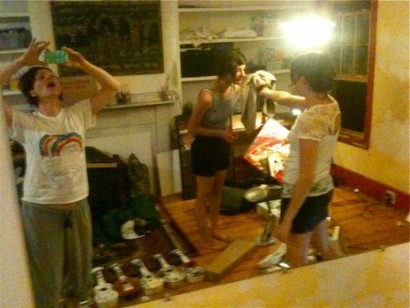 we were almost finished by 3 am…. 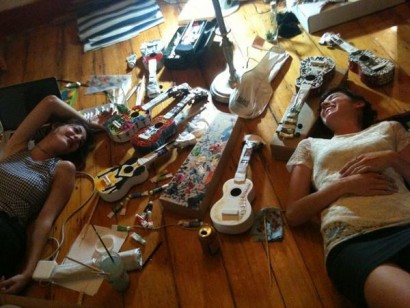 i’ll post some pictures in the mailer, which will be going out sometime in the next 48 hours with ordering info. we’ll also have some really nice fancy ones taken for the storefront and so we can remember what they all looked like when they go off to their new homes (to live with you)…
seriously, this is last call, fuckers….sign up HERE.
meanwhile….
here’s a video clip of the painting fun that noah took with my phone.
casey is priming a uke to be black (it wound up being inspired by “high and dry”) and meghan is adding more flames to the thom yorke masterpiece:
more tomorrow.
today was an A+ day. MOAR ART
love,
AFP
p.s. speaking of incredible painting, this little jobby came into the website today….holy shit. by lucy coombs from the UK.
it’s titled “AFP Music Box”: 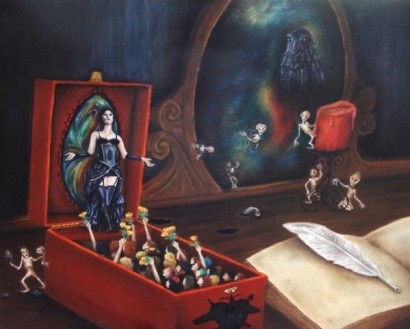 life will break you