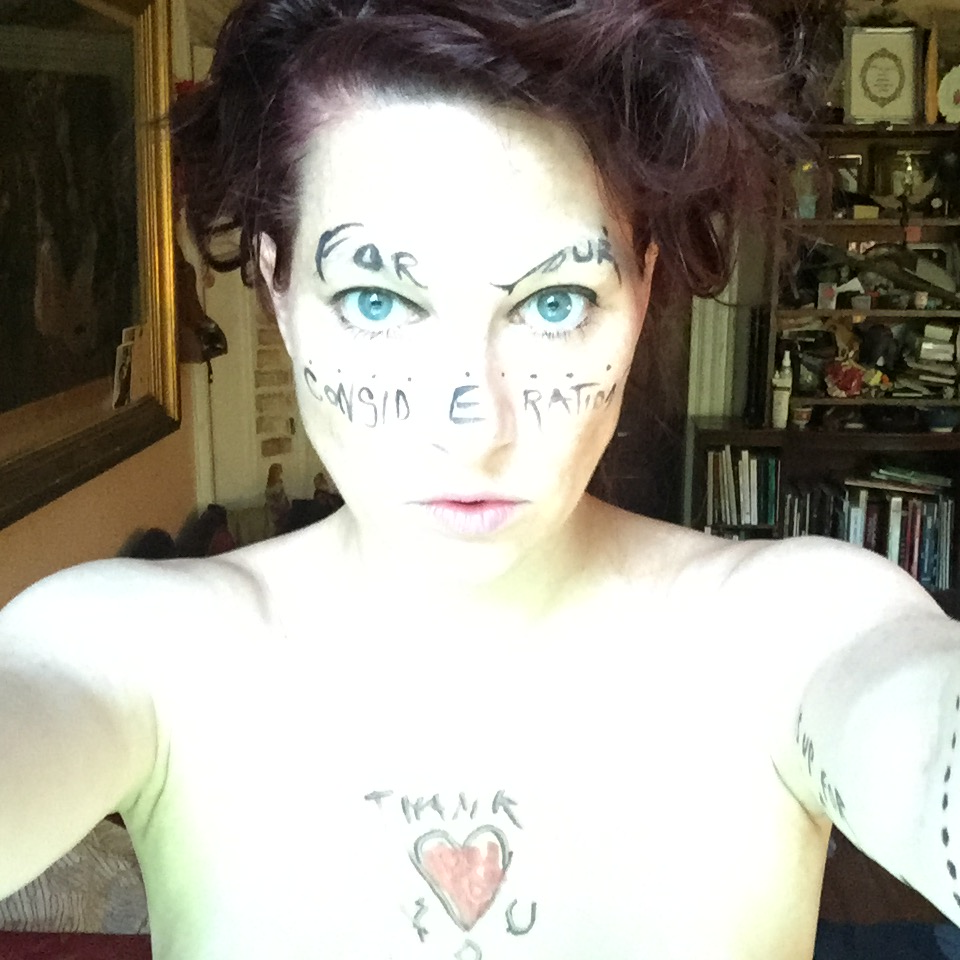 I have another message in the works to you with other thoughts but this is taking precedence. I’m in a car (don’t worry, not driving) on route from boston to upstate New York.

i literally just plastered it all over social media, so you may have seen on Twitter/Facebook … I also just sent a mailing-list email with the same info, something I was slightly loath to do because I sent an email about the paperback release out about a week ago and I try to keep the email to a non-annoying minimum…but it seemed important.

soooo I found out a few days ago that I’m “up for consideration” for a Grammy nomination this year for the Art of Asking audiobook.

this doesnt mean im NOMINATED ! it means that somebody put the audiobook into the running and it might make the final top five final nominations. so basically…I’m long-listed. and then if I get “the” capital motherfucking THE nomination then that means I head off to the Grammys with a sick swan dress and naked baby strapped to my head and all that.

the thing, as you probably know, is that the nomination is pretty much all that counts. if it gets nominated, I’ll be a grammy-nominated artist forever, which I can put up on my “oh yeah?!” shelf along with my bestselling book when the fraud police and the nasty “yes but you have no talent and nobody loves you” mainstream critics come knocking and stuff.

so…the way the Grammys work (I had no idea, none, until I found all of this out in the last few days) is this: there’s a massive voting pool (the national academy of recording arts and sciences: https://en.wikipedia.org/wiki/Nat..) of literally THOUSANDS of members. pretty much any pro person in the music business from performers to engineers can join. these people are all floating out there in the universe (you may be one!!) and my job, now that I’m finding out (at the very fucking last minute, because vote ballots have to be in mid-November) is to make as big a noise as possible so that those people simply KNOW that I’m in the running, so when they vote they can wander over to the spoken word category and find me and vote.

meanwhile, the fact that I’m in the spoken word category is weird, right? it turns out audiobooks are the things that have dominated that category and the grammy is usually won by a bill-Clinton-level-celebrity who has put out and narrated their own memoir. the grammy almost always goes to a work of non-fiction.

the fact that my book is about music (and HAS MUSIC IN IT! – there’s a ton of relevant songs included) is a real advantage, even though I’m not Bill Clinton famous (or Lena Dunham famous or Amy Poehler famous, both of whom are probably going to be nominated). on the other hand the old-skool music industry folks has never known what to make of me and might see my name and run screaming as if I’m going to set their awards ceremony auditorium on fire and then pee on it.

ANYWAY – that’s the haps.
I made this video this morning (links below) … my first sharpie undertaking since giving birth. it felt quite liberating. I didn’t sharpie the baby.

if you want to HELP the best thing you can do is get to social media land and retweet and facebook.

especially if you have friends and colleagues in the industry, share!!! it will help.

to my american comrades….PLEASE REGISTER!!!!