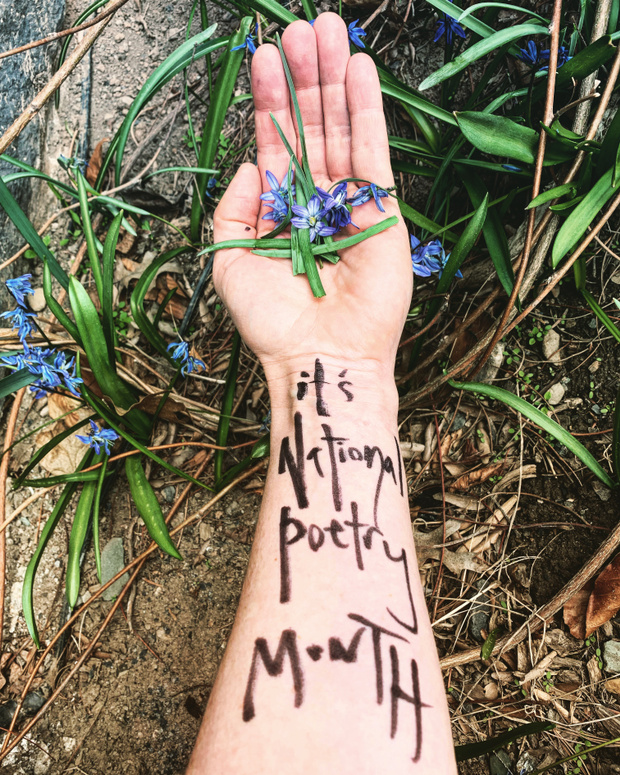 funk as puck poems, electric fetuses in minneapolis, and more.

TL;DR….tons of things about POEMS and the SHOWS and I AM DOING AN IN-STORE IN MINNEAPOLIS ON SATURDAY FOR RECORD STORE DAY @ ELECTRIC FETUS!!!!! keep readin.

greetings from woodstock, where i’m gathering my wits and getting ready to drive to laguardia airport tonight, then fly to chicago in the morning for El Grando Chicago Show. that’s tomorrow, then on saturday i hit st. paul.

a note about upcoming content & and an upcoming event, which i’m juggling in the hazy background…

poems are punk as fuck. i’ll share a poem, a new favorite that i just found in a book of poems by wislawa szymborska, down below after i sign off. to leave you with thoughts.

in fact, why not just post a poem here, everybody?

it’ll be nice to read some poems on my way to chicago tomorrow.

i’d rather read your poems than the new york times, which is what i usually do.

poems are less depressing than the news.

in the comments section

a moment of poetic silence

as i mentioned in a post a little while ago, i almost definitely be posting / thinging the boston-bombing-related poem that i wrote for the masspoetry benefit last month.

it’s a slightly scary thing to do, and therefore a wonderful thing to do. i think i know how to do it. sometimes i get these things wrong. you’re with me now.

also, right after the BOSTON & NEW YORK SHOWS, i’ll be in the midst of shooting the “drowning in the sound” video here at our house with a huge team, but i’ll be busting down to NYC just for a few hours to attend maria popova’s “universe in verse” event in brooklyn on april 23rd, at 7 pm. it’s SOLD OUT, but will stream! so hold for info. 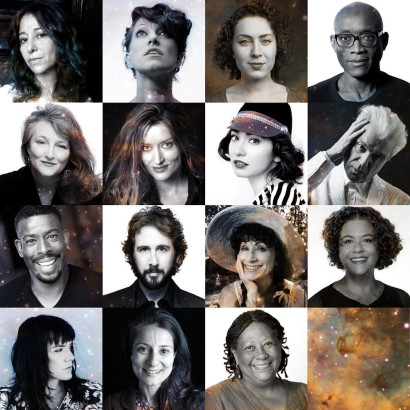 the guests just keep getting better and better…this year it’ll be me, neil, david byrne, regina spektor, bill t jones, krista tippett from “on being”, and many more….here’s more info:

MAYBE I WILL WRITE A NEW GODDAMN POEM JUST FOR THIS?

in the I AM ABOUT TO HIT THE ROAD AGAIN DEPT….

here’s a great shot of the chicago marquis from @geekettelindsay via twitter. 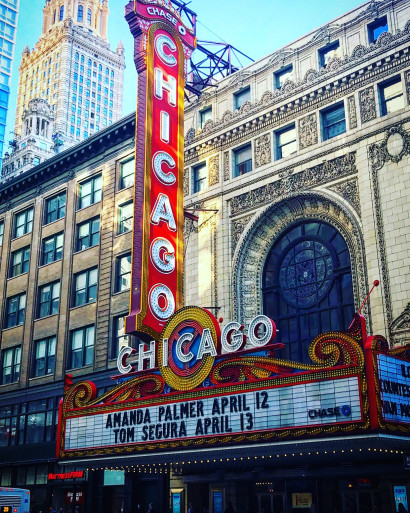 apparently the comedian tom segura is on the night after me. if you like him, you could just camp in your chair…i invited him to the show on twitter just now. 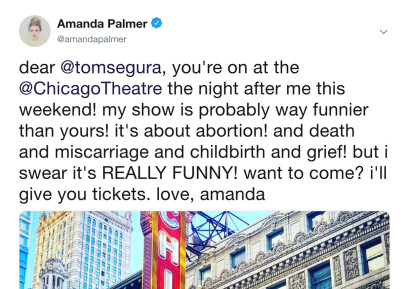 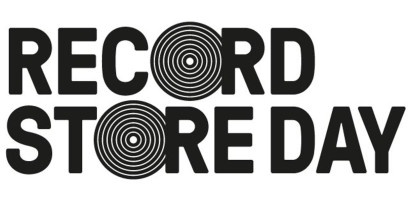 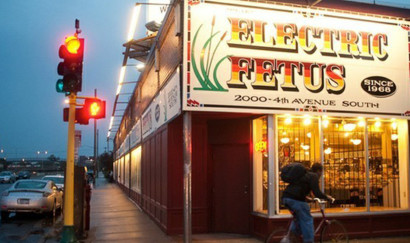 i have JUST ENOUGH TIME to swing by electric fetus and sign a ton of records and do a quick group photo before i jet to the show!!!

if you can come, come!!! i likely won’t be signing after the show in st. paul, and this will be fast fast fast – like, flying down the line fast – but come make mayhem with me!! i’ll bring my ukulele and hop up on a box and scream some truth!!!

NOTE:  this is for the Minneapolis location (not Duluth)!!!!

…..AND LET PEOPLE KNOW HERE or on the fb group if you’re coming so y’all patrons can find each other!!!!

here’s a FB event link so you can RSVP, hayley just bopped it together (THANK YOU HAY):

IF YOU’RE COMING TO THE CHICAGO 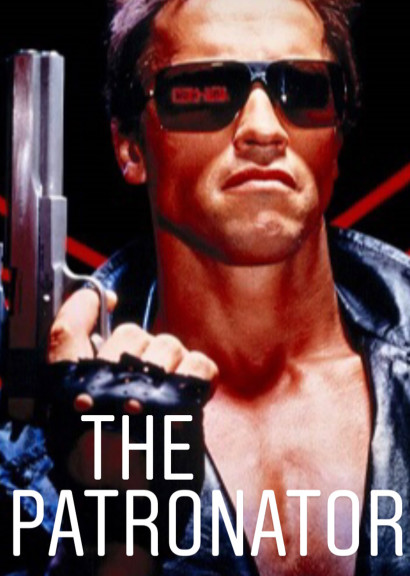 ……don’t forget that MICHAEL will be the PATRONATOR in the lobby, and we have our pretty alfredo richner patron pins to sell you for a mere $5, which is about what they cost to make they’re BEOOOOTIFUL and it’s been so wonderful seeing people wearing them with pride.

if you’re coming to a show and want one of these pins, brush up on this post, it has all the details:
https://www.patreon.com/posts/25921823

here’s a pic of meg, who just posted this to the patron FB page….lookin killer 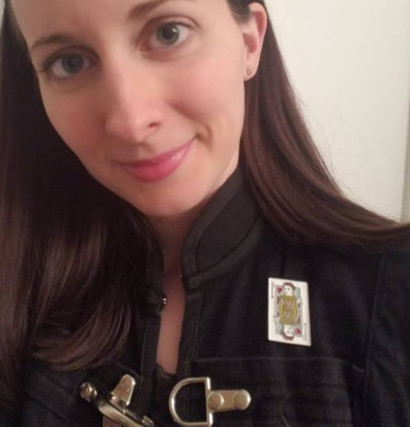 here’s a pic of michael and heidi (the merch queen i stole from ani difranco, she’s KILLING IT) from the DC show! 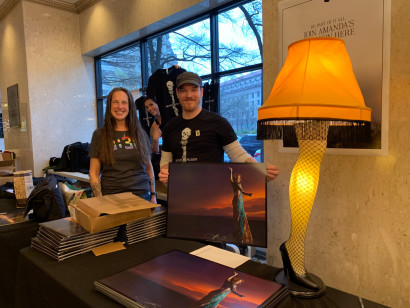 and here’s a wonderful leg lamp that beth brought to the show at the patronator-station. notice our QR CODE! WE ARE FUTURE!!! 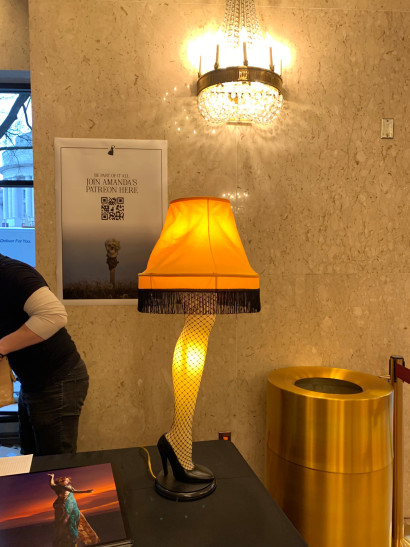 we had a leg lamp in philadelphia too, brought to us by sam

this is vin, who came to the DC show with an industrial sized box of tissues. 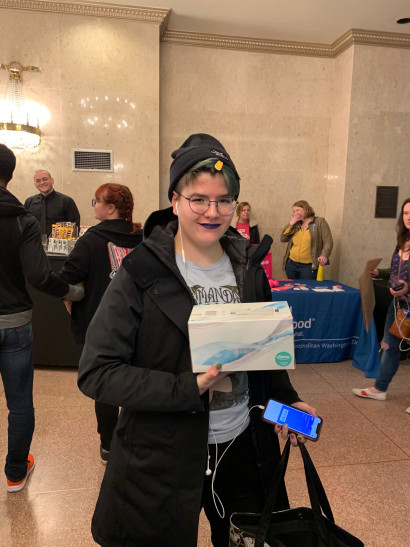 VIN COULD HAVE BOUGHT A HANKY AND SAVED SO MANY TREES. just kidding vin we love you. 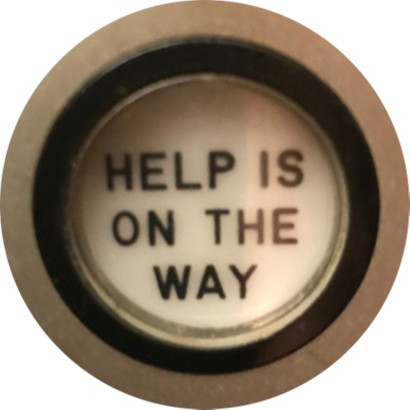 IF You’re a patron….and you probably are if you’re reading this… i’d love you to feel AUTHENTICATED TO HELP!!! go say hi to michael! go talk to peeps who are curious/confused about the patreon..! i may even try some sort of experiment in chicago to buddy up people who need help understanding it with people who are part of it.

i need to do a huge thank you soon to all the people who HAVE BROUGHT LAMPS and other props for the stage…!!!!!

DETROIT:
thank you amanda for bringing the leg lamp and to mary for the side table.

TORONTO:
thank you jenn for the leg lamp!!!

MONTREAL:
thank you tieu-thuy for the side table!!

DC:
thank you jessica for the side table and the gifts left inside of it, thank you beth for bringing the leg lamp.

and to everyone else who has reached out for the other shows, thank you!!!

if you wanna help out, we still need an area rug for chicago!!!!

and some other things for the upcoming north american shows. drop us a line here if you have a disco ball, area rug, a side table or a leg lamp to loan us for one of the upcoming shows (as always, full tour dates are at http://amandapalmer.net/shows) :

a quick plug for friends….. 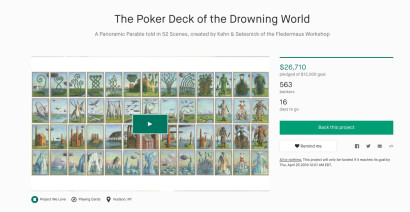 kahn & selesnick, the geniuses behind the photos in the There Will Be No Intermission artbook, have a PLAYING CARD DECK called “the poker deck of the drowning world” that is absolutely gorgeous. great gift idea…..go score one before it’s over. they’ve more than hit their goal of 12k with over 500 decks sold, but the offer is only out for another THIRTEEN days. so…

it’s highly probable that i’ll have last-minute guest list tickets to giveaway both tomorrow in chicago and saturday in st. paul. stay tuned … and if anyone has a good idea for a photo spot in chicago near the theater, hit me.

SEE YOU IN THE MIDWEST MOFOS

They jumped from the burning floors—
one, two, a few more,
higher, lower.

The photograph halted them in life,
and now keeps them
above the earth toward the earth.

Each is still complete,
with a particular face
and blood well hidden.

There’s enough time
for hair to come loose,
for keys and coins
to fall from pockets.

They’re still within the air’s reach,
within the compass of places
that have just now opened.

I can do only two things for them—
describe this flight
and not add a last line.

depressed but on fire.