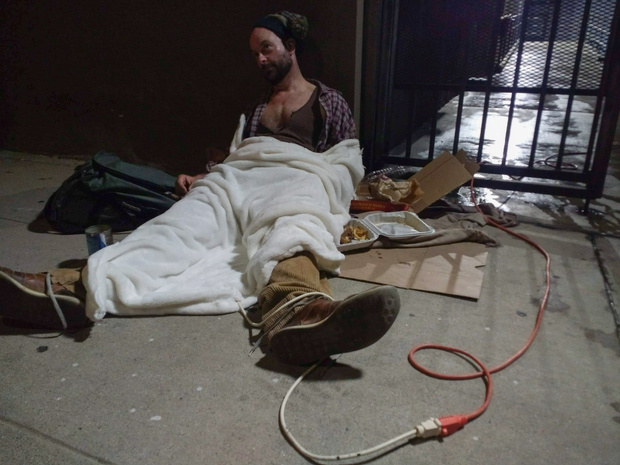 **NYC, HEADS UP. I AM DOING A YOU-VOTED-HOORAY PARTY @ CITY WINERY ON NOV 6th with JHEREK!!! TICKET LINK WITH PRESALE CODE WILL BEE COMING AT YOU IN A FEW HOURS. TINY PLACE. TICKETS WILL FLY.**

this was written from a cold cafe in islington, london, where i just dropped ash off at his nursery school and where they were playing the entirety of “OK computer” by radiohead and i was simultaneously crying and happy inside and tweeting with a bunch of fans from brazil, commiserating about the state of world politics. it’s really feeling so dark, so dark right now. all of this in the midst of playing these MASSIVE dresden dolls shows in london and everything just feels like a huge life-art sandwich of reality. i’m about to take stage (in the next few hours, and i know many of you will be there) at the Troxy and i’ll be speaking loudly about what’s going on. holy shit. (and watch for the Althing post tomorrow…sorry for so much end-of-the-month posting but you know how things pile up).

halloween has never been scarier. if you haven’t been reading the news….brazil just elected (by popular vote) the most extreme right wing fascist they’ve seen in office since becoming a democratic country. this is a guy who says that he’d rather his son be dead than gay.

for a minute there, i lost myself….

jason and i were just joking over text that it feels like the world is ending.

but that our video will CHANGE ALL OF THAT.

and now, greetings from where i am actually posting this Thing in real time…FROM BACKSTAGE at the troxy about to hop into dresden dolls soundcheck with brian. michael and hayley are here, too.

IT IS VERY COLD BACK HERE. 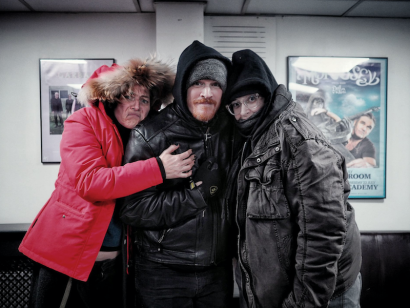 THIS IS VERY POETIC AND YOU ARE ABOUT TO SEE WHY.

it’s probably not true. this is, like, my least political video of the year.

OR IS IT? ONLY YOU CAN DECIDE.

i hope you already got a chance to listen to the track itself…everyone i’ve played it for seems to think it’s as warm and cozy and dark as i do.

in these dark times, i like to think that nothing’s a coincidence.

this song was about being cold, then it was maybe about suicide, and now the video has made it about….something else entirely.

and just in time for halloween.

AS A REMINDER, you can get “electric blanket” with another song i wrote with jason called “house of eternal return” on a LIMITED EDITION 10″ vinyl record. it has gorgeous front and back artwork by bayla arietta. only 1,111 of them are made, once they’re gone, they are gone.
the front vinyl cover has the electric blanket painting artwork (left), and the back vinyl cover has the house of eternal return painting artwork (right):

if you’re in USA, or worldwide, you can order it from jason’s merch shop, HERE:
http://www.jasonwebley.com/electricblanket.html

if you’re in EUROPE or UK, you can order it from my UK merch shop, HERE:
https://ukshop.amandapalmer.net/collections/vinyl/products/electric-blanket-house-of-eternal-return-10-vinyl-afp-jason-webley

a little about the video….but, SPOILER ALERT. so please go WATCH THE VIDEO BEFORE YOU READ ABOUT HOW WE MADE IT. 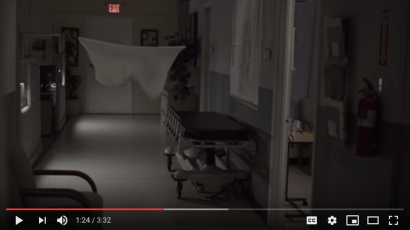 if you missed the post about the recording of the song (which i released as an official Audio Thing a few days ago), you know that it’s an oldie, jason and i co-wrote it about ten years ago.

once we recorded it this past winter at ani difranco’s joint in new orleans, we started talking about what to do for a video.

it’s such a weird, simple song…it seemed like anything was possible.

we started chatting about what would happen if the actual blanket was the *star* of the video….for better or worse.

and then one thing led to another.

we called our old collaborator hoku uchiyama, the genius animator behind “have you seen my sister evelyn”. (https://www.youtube.com/watch?v=skUK-OlU4H0) 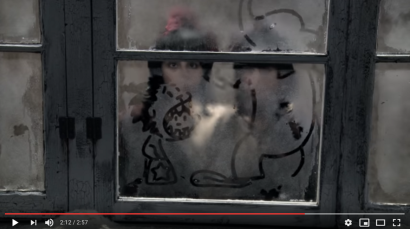 hoku was at the vanguard of animation techniques when he created this: nobody had ever done anything quite like it, and it’s won AWARDS. i don’t pay as much attention to my youtube views and counts and such lately, there’s just too much to keep track of, but i just went over to the clip to have a look as was totally floored to see that it’s one of our most popular videos – it’s had over 1.2 million views and there’s some pretty hilarious conspiracy theory evelyn evelyn comments.

anyway, we rang up hoku, told him our weird blanket-as-protangonist idea and he was game…and thus it began.

jason was able to be on the set of the shoot but i wasn’t, i was busy mounting the shows in edinburgh while they were busy shooting in LA. but i know a bunch of member from this here community pitched in to work on it…and you’ll see a little glimpse of jason’s face cameo-ing in the trolly scene.

here are a ton of behind-the-scenes shots of the making of the video, which, as you can see, was a huge labor of creative and blanket-puppetry love. these photos were taken by jason, mia, hoku and ken. 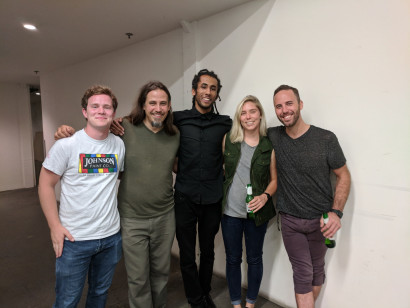 from left to right: thomas, jason, hoku, mia, and ken 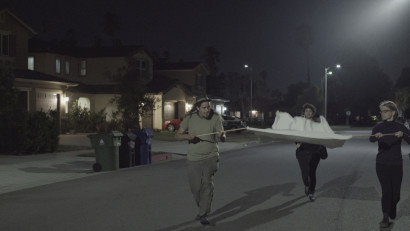 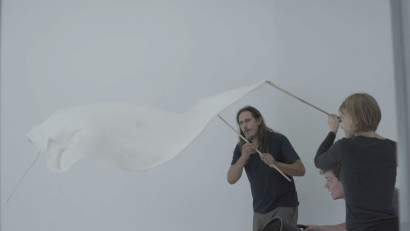 most of the shots are composites in the actual locations, a few were done in a studio. 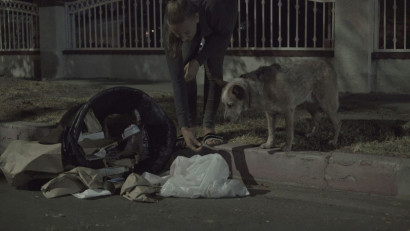 elena and max the dog 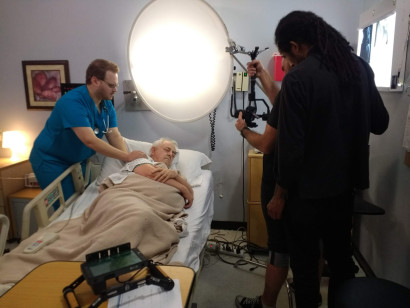 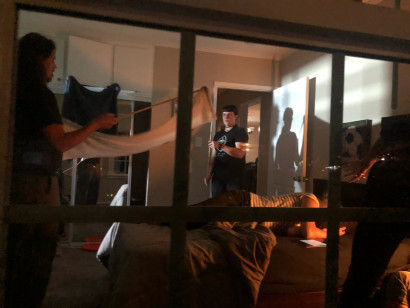 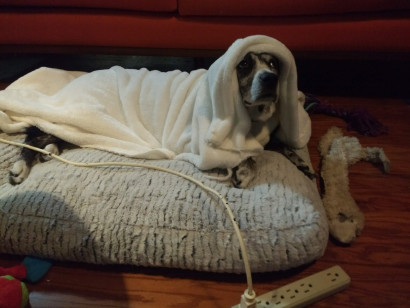 laika, the other dog 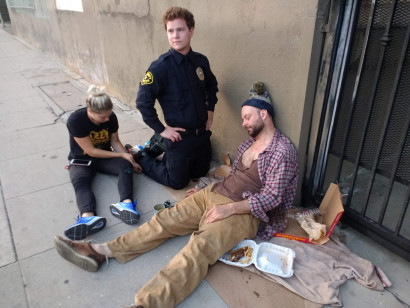 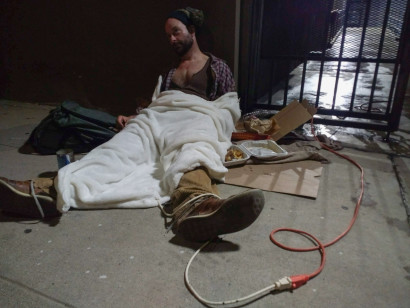 and here are some words from jason….

Ever since Hoku did the amazing “Have You Seen My Sister Evelyn” video back in 2010, I’ve been hoping to work with him again. When Amanda suggested we make a video for “Electric Blanket” I thought it would be a perfect match. I was lucky to be able to fly down to LA to be part of the shoot, helping out with puppeteering and various odds and ends. Hoku and his team were amazing.   Amanda was on another continent, but we managed to work in little cameos for both of us. The shooting took place over the course of a week, going from sundown to sunrise most nights. Since then Hoku has been slaving to get all the compositing finished. A lot of work went into these three and a half minutes of footage.

I don’t know what to say about the video itself without giving anything away. It’s a bit silly, a bit sweet, a bit twisted, and absolutely beautifully rendered. I hope no one takes it too seriously.

In this legitimately scary moment when so many people are being threatened and the world feels like it’s boiling over, releasing a video like this feels a bit like an awkward non-sequitur. I just hope it doesn’t seem insensitive. And that maybe for some, it even provides a bit of warmth.

Amanda and Jason came to me with two strikingly different ideas for a video.  Amanda’s idea featured a cute comforting blanket, while Jason’s idea was considerably more sinister.

My thought was to create something that lived in between – much like the song’s music and words create a beautiful mix of dark, light and silly.

One thing I love about Jason and Amanda’s music is how easy the inspiration comes when I listen.  With their songs I see images and have ideas REGARDLESS of if there’s a music video assignment.  So every now and again, when they ask me to make something, it’s wonderful, because I get to put the inspiration they give me to good use.

Most of our cast and a lot of our crew were people from Amanda’s patreon community who reached out via email.

Which meant people bravely meeting us for the first time, often in the middle of the night, in one of over a dozen locations across Los Angeles.

For me, it made for a pretty magical experience.  We’d have a quick creative collaboration with someone in Eagle Rock.  And then we’d high tail it to South Pasadena at 11:30pm to meet and collaborate with someone else.

It was a lot of trust on everyone’s part, and it worked out great.  This feels like a valuable thing and I think it grows out of Amanda’s philosophy on art and community.  It made for an experience that I am grateful to have been a part of.

to everyone who helped out on this project: THANK YOU SO MUCH.

i just showed the video to neil and he loved it. and he agrees….the blanket is a mystery. murderer? harbinger of evil?

OR BENEVOLENT ANGEL OF DEATH? 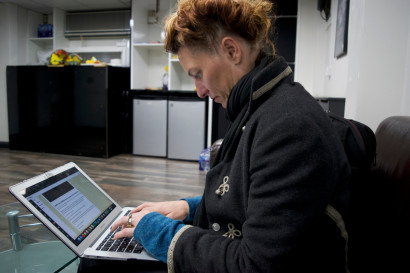