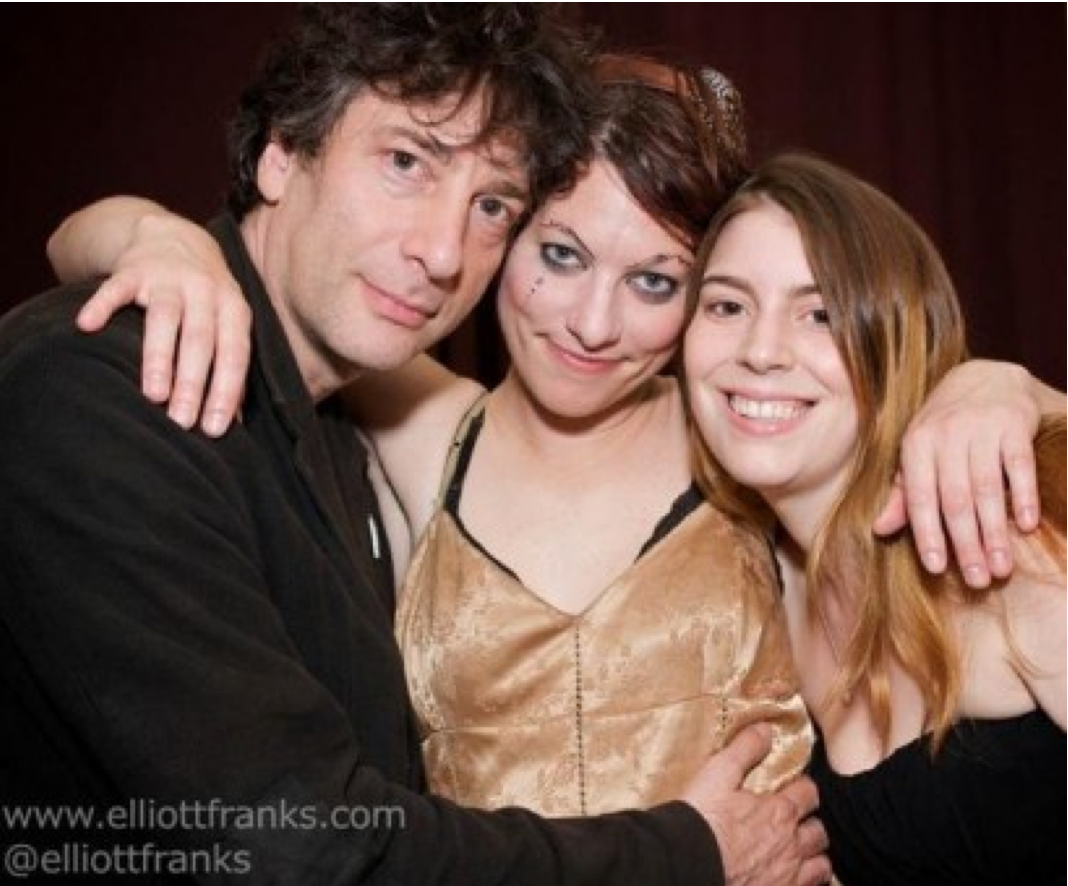 from the Edge of the Middle of Nowhere

if you don’t know about the tour, click HERE. i’m touring through vermont, maine, massachusetts, new york, pennsylvania, virginia, north carolina, and tennessee from november 11th-22nd with nervous cabaret. the shows are going to be KILLER.

REMINDER (i forgot to put this in the email blast):
if you HAVE A SPARE TICKET, NEED TO BUY A TICKET TO A SOLD-OUT SHOW or WANT TO RIDE-SHARE….go to theshadowbox.net!!!!

strange times. i’ve been holed up in the Middle of Nowhere, floating and fighting the flu.

neil was here, but then he left, and jason webley came to stay.

zoe keating was supposed to be here, but she wound up back in the states.

instead of doing what we thought Good Musicians should do, which is ignore the Internet and make jolly music day and night, we’ve been plugging away at clearing out our inboxes.

sometimes making salads and indian food and going for walks to the Edge of the Middle of Nowhere. it’s cold out there.

we’ve also been spending time perfecting our backgammon skills (we recently played a game where each player simply had to take a 5 and a 2 for every roll, it got boring fast) and having long long long loooooooooooooong and frustrating phone conferences with the Evelyn Sisters (we’re still trying to produce their debut record).

they’re currently holed up at home in walla walla and refuse to actually commit to a release date for their record. they are fucking impossible to work with.

but it’s also hard to argue with or yell at two conjoined twin sisters who have had such a tough life. i always end up feeling like an asshole when i try to convince them to get their shit together. i usually back off and end up profusely apologizing about everything i say because every time they get upset they just threaten to not release the record AT ALL, which would devastate us.

sometimes they just hang up on us and don’t answer the phone for days.

jason is harder on them.

maybe it’s a girl thing, but i just can’t be angry at them.

the conference calls are also impossible to follow because the two of them share one cell phone that they keep snatching from one another and it’s useless trying tell them apart. both of them have really strong (and conflicting) ideas about the release of the record but they’re BOTH constantly changing their minds about EVERYTHING from the mixing to the mastering to the album artwork to the touring routing…oi vey. we’re thinking about just getting them their own fucking manager because we can’t deal with it. we wanted to help but it’s gotten to the point where we’re ready to give up. it’s hard. they’re SO talented but they’re SO weird. imagine wesley willis plus daniel johnston meets buckethead plus the olson twins without the budget. we’ll get there.

i’m, meanwhile, wondering what the fuck to do with my life. if you have any ideas, let me know.

i think i might do something bizarre with webcasting when i get home. i like the idea of having some kind of webcast marathon where i take requests for 12 hours straight. i don’t have that many songs, but we could do some interesting antics for filler. i could have an opening act every hour or so. why not? why not, indeed. all in favor, say aie. figuring out a TIME will be hard…the states and europe and australia are always at odds with each other, but we’ll make it work.

but quite seriosuly, if anyone has any suggestions, put them here in comments. i’ve not been keeping up with the world of OTHER people’s webcasts.

i’m thinking of turning my apartment into a webcast lounge with a virtual tip wineglass you can donate to in real time.

all i know is that when i see a katy perry vlog i feel sad inside and when i watched 15 minutes of a tila tequila webcast i wanted to throttle her. there must be a brighter future. help me.

….we also sold a ton of the signed DVD and bunch of signed tour posters for a grand auction total of about $10,000.

and there we have it. i’m making a living. i’m still in debt, but the light at the end of the tunnel is glistening.

thank you to everyone who tuned in…it was fun as hell.

speaking of clan gaiman…here’s one of my favorite bits of the london union chapel show…..

neil had been playing me “derek and clive” (go listen to the original HERE…….i also recommend pretty much everything else….go down the youtube rabbithole)

and we decided to not cover it in a church a lovely as union chapel would be sacrilege. he’s got a lovely voice, my fellow.

here’s me playing oli’s flaming bicycle piano outside the church…. 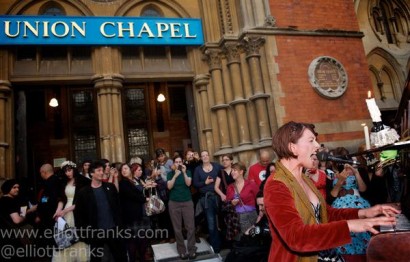 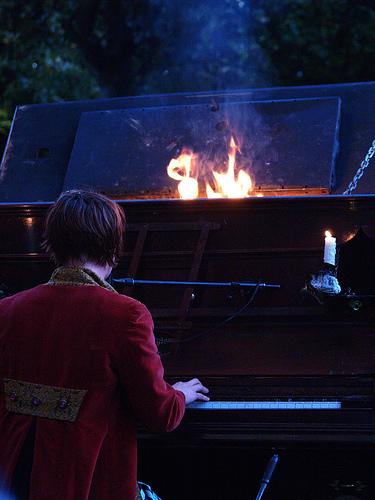 i finally got a positive review in the NME, who’s generally had it out for me and the dolls for years. that made me glad. check it out HERE.

here is beth auctioning off the painting by Daniel van Ness that was created over the course of the two nights…. 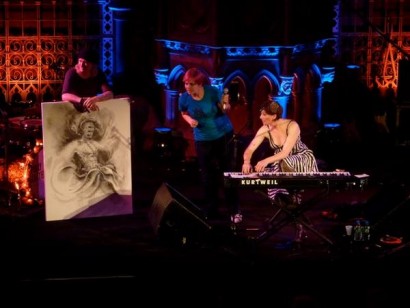 it went for 450 pounds to Alex, who stepped in when the actual winning bidder admitted that he was just kidding and had no money. you can see more of Daniel’s work HERE. thanks to yasha from the strychnin gallery for finding him and sending him our way…..

beth administering the “ask amanda” portion of the concert…. 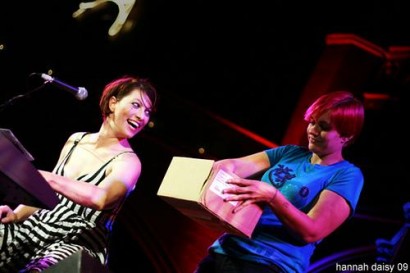 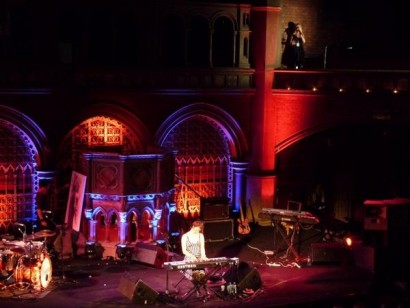 amanda squished betwixt clan gaiman (that be holly the hottie on the right, lucky mr. Scott and Sean)….. 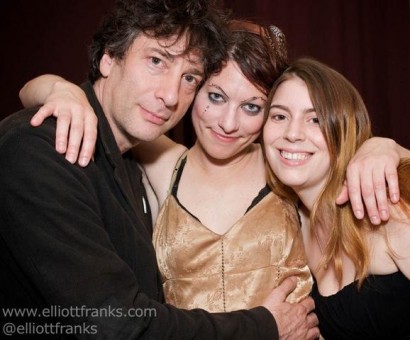 and then to blow off steam, i did the last-minute gig in camden at the world’s end.

about 500 people crammed in and as usual…i had no plan. i ended up borrowig lots of people’s clothes, drinking lots of cider and champagne, and taking a lot of song requests.

pictures should speak for themselves….

holly trying to fit me into some chick’s dress…. 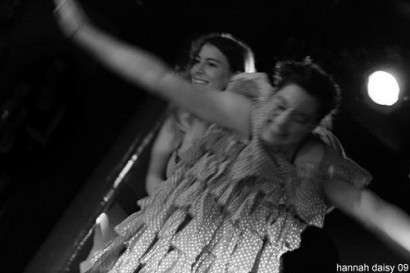 and some dude’s t-shirt…. 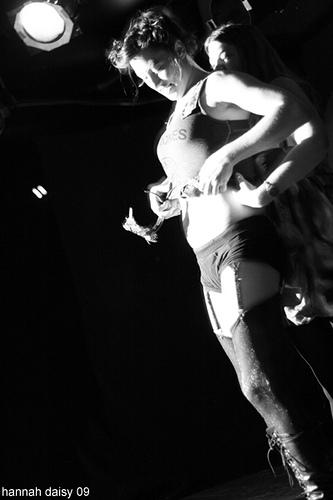 this hat worked well (thanks robyn): 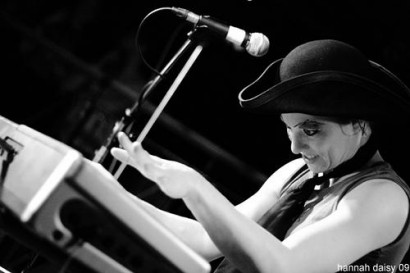 mr. man reads from the who killed amanda palmer book….. 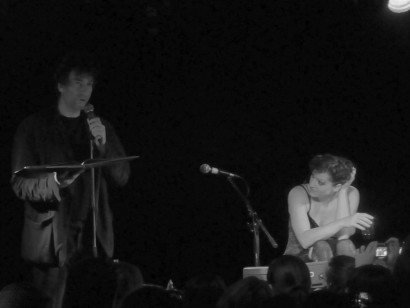 ….and it was a wonderful night.

3 sold out shows in london.

shall report on the state of the union.

p.s. for those of you in boston…i’m sorry again about the show being canceled. i will try to do something weird and twittery while i’m home. watch for it.

if you didn’t get the memo, make sure you email HOBboston@amandapalmer.net with your ticket receipt so we can give you first crack at the boston new years show & a special party.