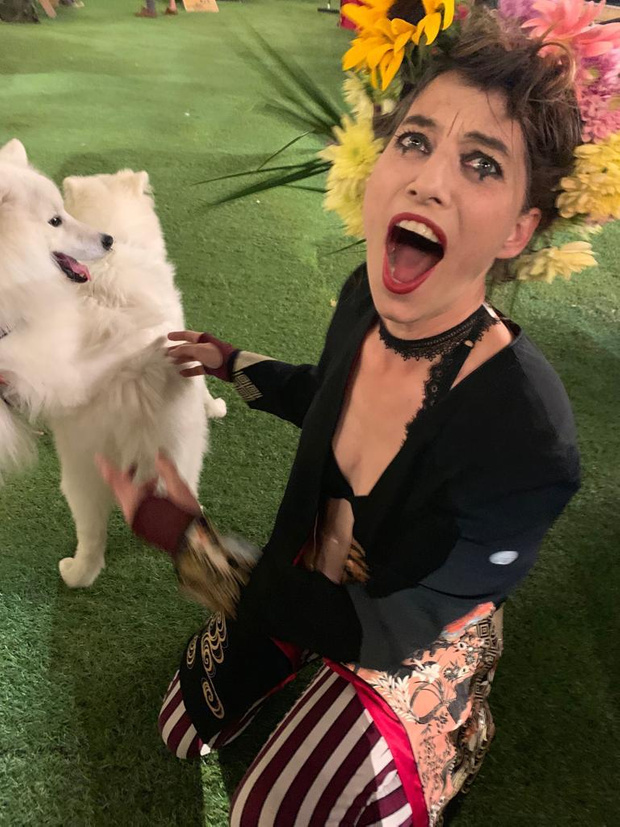 edinburgh ninja gig – the sights, the surprises, the FLOOFY DOGS.

greetings from a plane that is hovering above the atlantic. i’m posting this from my flight between edinburgh and NYC, a flight which was 6.5 hours late departing, so i got to know the departure terminal of the edinburgh airport intimately. there’s a sushi train! i spent most of my time at the cafe nero, draining espressos and answering emails. the life of a rock star is glamorous.

i’ve MISSED DOING THIS. GODDAMIT I LOVE ME A GOOD NINJA GIG. it makes me feel alive and real.

no tickets. no moneys. no warning. just do a THING.

this one was extraordinarily awesome. if you were there: THANK YOU. goddam. what a night. what a space. what fire!!!!! and floofy dogs!!!!!

as promised…here’s a gallery of photos….. 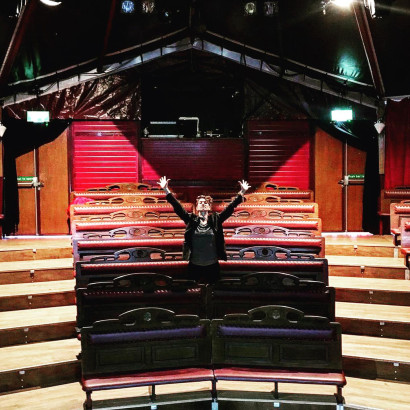 it started out in a secret-feeling-little circus tent, called the piccolo, and i played for patrons only from about 8:30pm til about 9:30pm, while the main public gathered outside, listening to the Whoop Within.

i’d never done a ninja like that before: with a patron-only component, and i gotta say..it kinda worked!!! it only came about because the assembly folks, who run the square, offered up their tent for a ninja gig itself and i was like: er…it only fits 200 people, and i think 500 or more might show up. BUT IT IS SO AWESOME AND I WANT IT.

voila: use it for the patrons. and i’ll be damned: it fit literally exactly 200 people and about 200 patrons exactly showed up to fill almost every last little seat.

i’d originally been hoping to do the ninja gig on tuesday in a HUGE empty hall called the leith theater, and the gal who helps run it, katie, was all about it…but there were permit issues. but LOOK WHAT WE ALMOST HAD: 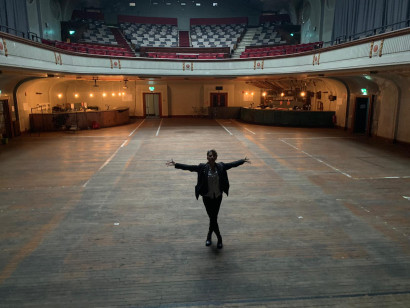 so close!! perhaps next time

it was nice to just….be with everybody. we were talky and chatty in a way that never would have happened outside later in the chaos. it felt like a nice intimate friend-foreplay before the giant crowd orgasm. or something.

and i brought along two newfound friends….alice fraser, an australian comedian who plays a mean banjo, and jenny lindsay, a spoken word artist i picked up on friday night at a variety gig that chris-the-now-famous-dentist took me to at the leith theater. 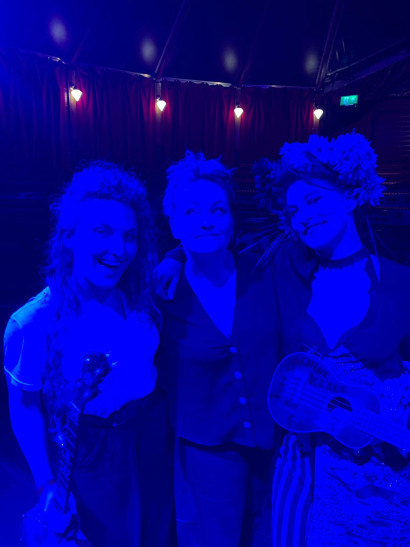 (by the way: thank you to everyone who’s asking on social media how mary is doing after the fall-and-no-fucking-ambulance-episode… she’s good! i called her yesterday. she’s getting one of those wheely-things for her leg and she’s in fine spirits despite the ripped tendons. neil and i are going to the wedding of their daughter, rosie, in just about 6 weeks in scotland….we are all just hoping she’s on her feet by then so she doesn’t have to be a limp-y around-y wedding mum)

feckin’ KT TUNSTALL showed up and played loud raucous guitar songs and we all freaked out. she and i played “i won’t back down” by tom petty even though we didn’t have time to rehearse it and i don’t think i’ve heard that song since the fuckin nineties. i sang fearlessly and off-keyly!!!

here be some of the best shots we pulled from the net. huge thanks to hayley for stepping in on this one and pulling these while i was TEDing…. 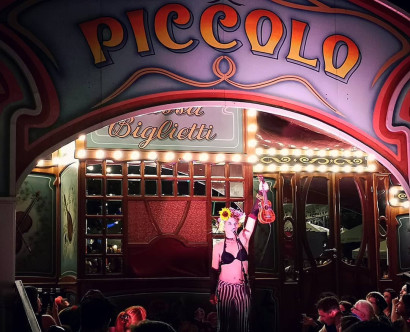 photo by @valentinab616 on instagram…
on the right is KT tunstall….on the left is jenny. 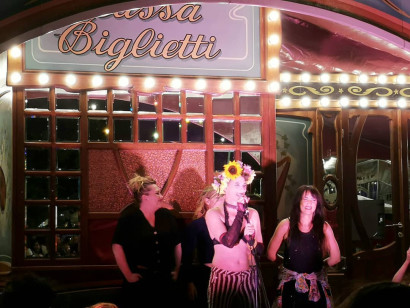 this is me reading the “empathy is nothing” poem off my phone in the wee patron-only tent….  because i’m an idiot and didn’t have my own poem printed out.

i don’t usually read poetry at ninja gigs but it was quiet enough and jenny inspired me…. 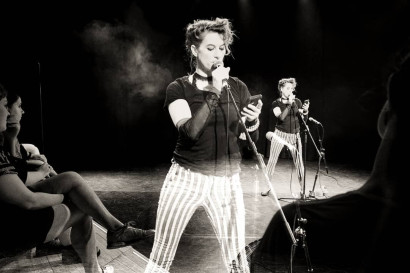 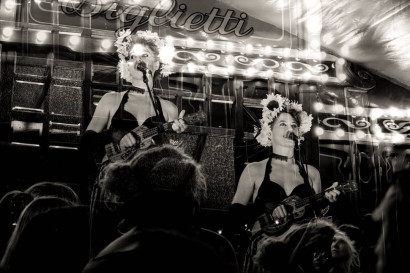 obviously, someone awesome gave me a flower crown, which i wore all night. who were you??

the 5 photos below are by gabrielle motola…. 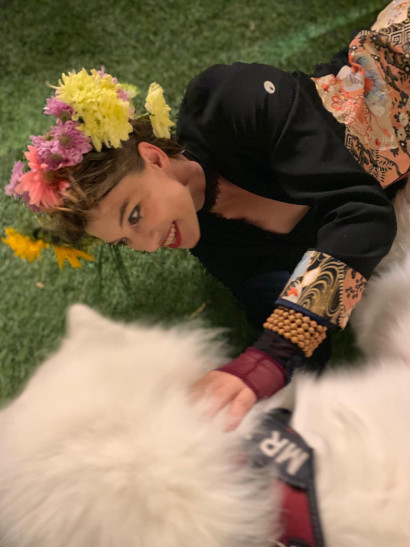 we had a few heated words about the new prime minister. 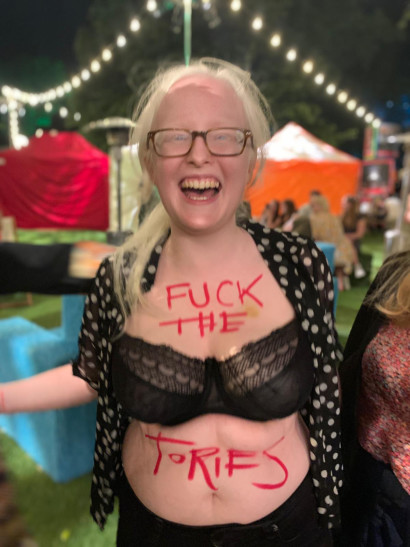 i swear this was not my idea.

i interrupt this post to show you this image if you have not seen it yet. 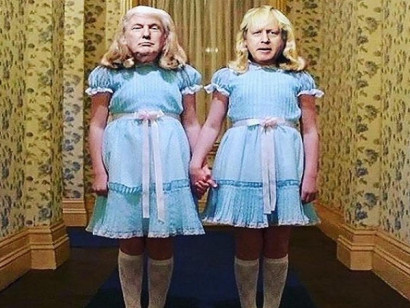 it is trump and boris johnson as the shining twins and it is perfect.

okay back we go. 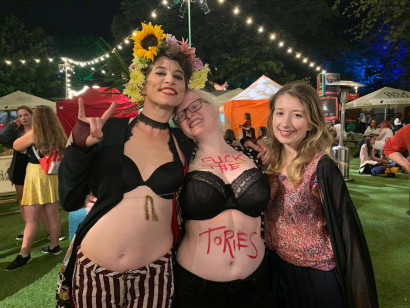 these dogs…they saved us from thinking too much about boris johnson or donald trump.

they were so soft. 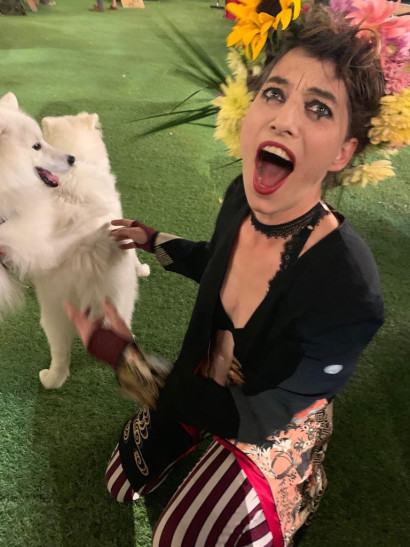 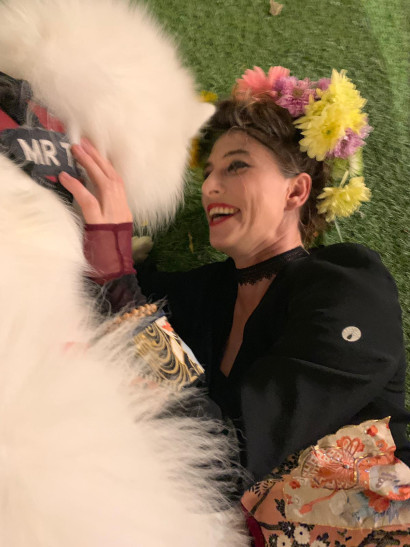 LOOK AT THESE FLOOFS!!!! 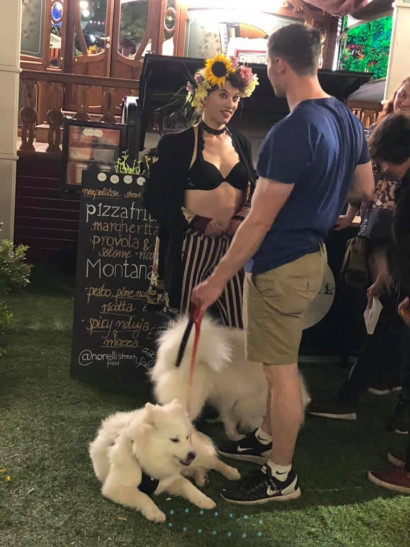 THEY FLOOFED THE WHOLE GIG!!! 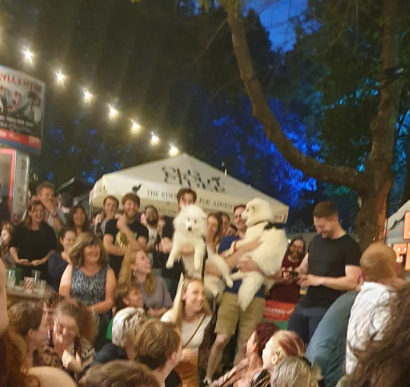 here is ALL FOUR OF US POWER LADIES: from left to right….jenny, me, alice, KT. 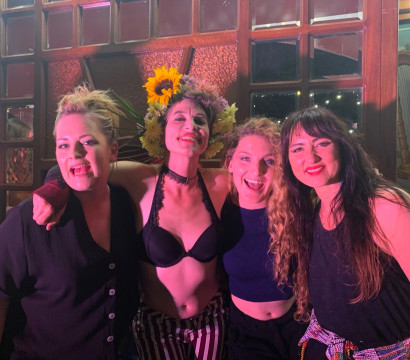 (photo by some passing person)

KT is playing a shit ton of festivals…you can find her tour dates here:

jenny has a new book of poetry called the script and it is FEMINIST AS FUCK and YOU WOULD LIKE IT. you can check that out, plus her other work, here: https://www.jennylindsay.com/work

AND…alice fraser is on patreon!!!

and this is her show at the fringe, coming up july 31st to august 26th. 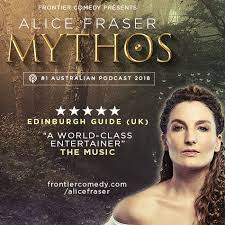 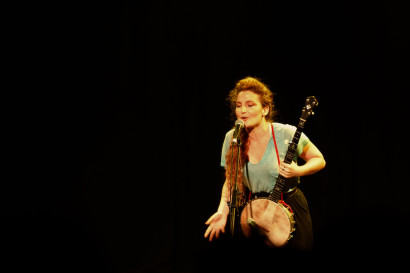 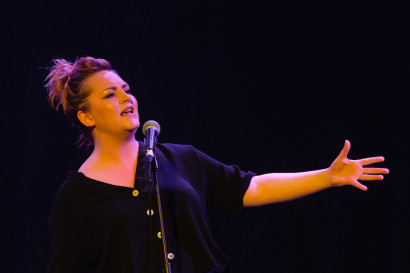 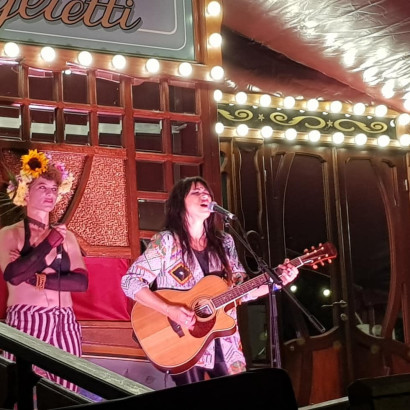 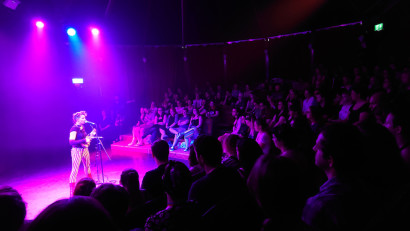 THE PUBLIC SHOW OUTSIDE THE WEE TENT…. 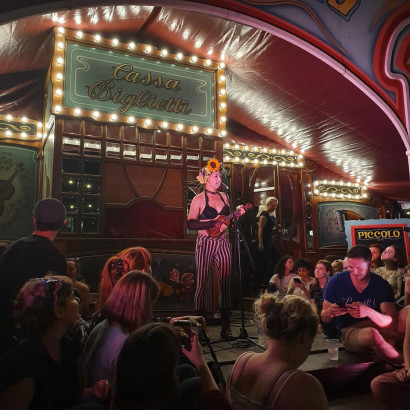 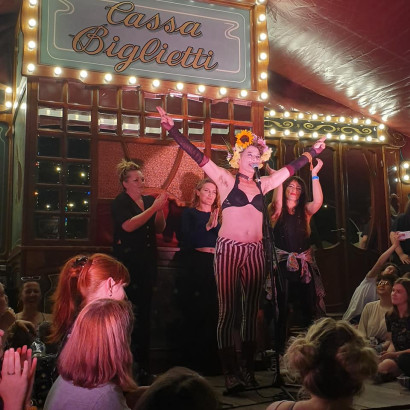 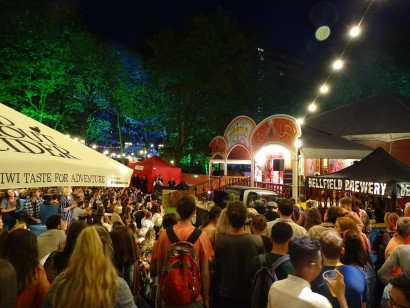 and my fave….this is KT crushing it with the audience outside the tent: 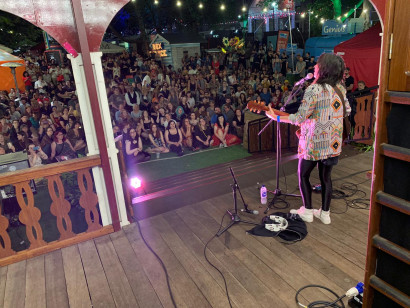 you see how gorgeous…. 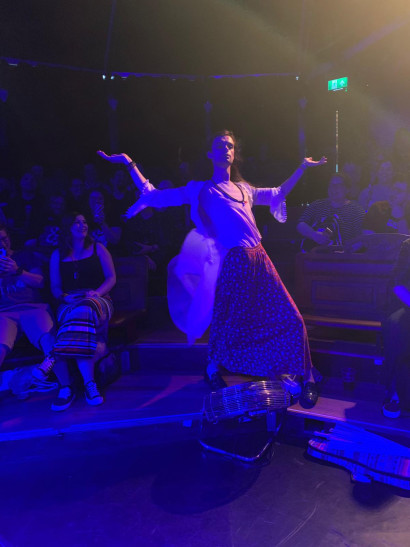 his is cal, one of my favorite new people, doing a marilyn impression with the fans inside the wee tent.

i signed for about an hour and then had a beer with one of my irish TED friends, simone, and then went home and fucking collapsed.

i was feeling a bit low.

i needed a ninja.

it was, on the whole, exactly what i needed to fix my soul.

i love me a good ninja.

the best part, i have to say, was honestly the PEOPLE WHO RAN THE VENUE.

it always does something good to my soul to see a bunch f people running around BECAUSE THEY WANT TO MAKE MAGIC. i kept telling everybody at the venue: NO! i don’t need a mic! no! i don’t need lights! no! this is a ninja gig! and they were like: WE WANNA DO THIS THIS IS LITERALLY OUR IDEA OF FUN WE HAVE TO DO SO MANY THINGS THAT WE DON’T WANT TO AND THIS IS FUN AND LET US DO IT.

that is the ninja spirit, and the people of the assembly were just so fucking joyful and happy that we gathered there and did insanity. one of the crew guys loaned his guitar to KT because she didn’t have one, and he got it signed at the end of the night, and it made his life.

if you’re around edinburgh, here’s the whole program for the assembly stuff:

support them. they rock.

AND ALL…..thank you to all of you for coming out, i love you dearly.

and SPREAD THE WORD: GLASGOW is on NOV 2 at CITY HALLS and is almost sold out!!!! TELL PEOPLE!!! and the rest of the UK dates are straggling along londo is all sold out three times over, but poor cork and the rest of the irish dates could use some jujjing.

I FECKIN LOVE YA

from abortion to contortion – the 12 most memorable experiences i’ve had @ edinburgh fringe.

what it was like in edinburgh, and the current life outline.