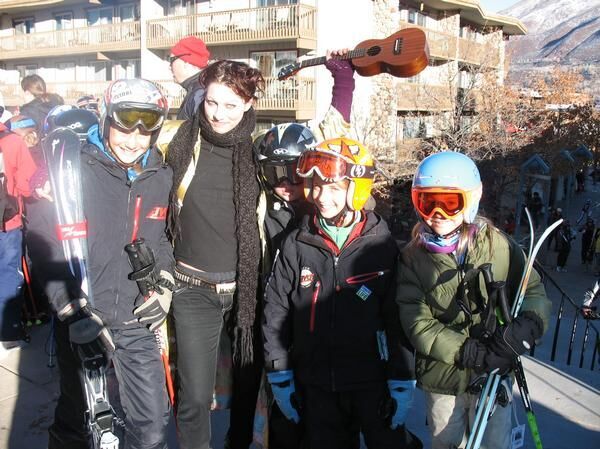 we’re in aspen colorado.
everybody here is skiing.
it’s weird.
we’re playing next to an ice-skating rink.
i did a little piece of local promotion this morning on local TV in front of the chairlifts.

But by day, I’ve been breeding, working at a fabulous independant PR firm outside of Boulder where I also volunteer part-time at the country club, when I’m not busy raising my
three WONDERFUL boys, Hunter, Bradley and Jake and my youngest one, our “little princess” on the far right, Caitlin! Here’s the whole gang about to hit the slopes in Aspen!! I don’t remember where my husband Steve is in this pic, he must have been locked up in a public bathroom nearby smoking crack and getting a blow job from a cheap resort hooker!! 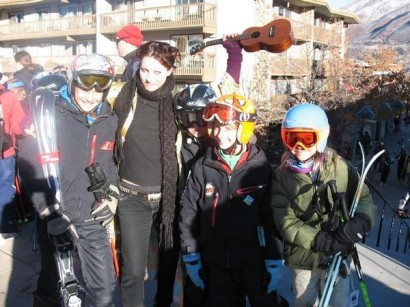 watch at your leisure. i’m getting excited about the possibilities of where i can webcast from.
chairlifts. caves. little deserted islands. i’ll surely be doing more. send in suggestions. i’m open.
i’ll read you bedtimes stories. i’ll demonstrate yoga poses. i’ll show you my apartment and how i make an omelette.
i’ll take you in the bath.

”I told a friend yesterday [jamming out with my clam out to Leeds United, nonetheless!] that I would kill a man to live your life [you move me]. I would do anything to make money doing what I love, what I am best at, if only just enough to get around to the next city, next show. The thought of every little stressor on tour gives me an uncontrollable orgasm.
I want to sleep in a parking lot in the name of art.”

get in the van with your band and i give you six months before you start thinking that people with normal lives have it pretty good.
the grass is always greener. i wouldn’t, however, trade this for anything.
…………………………

photographic dept of win:
me sporting the infamous squid hat, taken in toronto while i played ukelele on the bar: 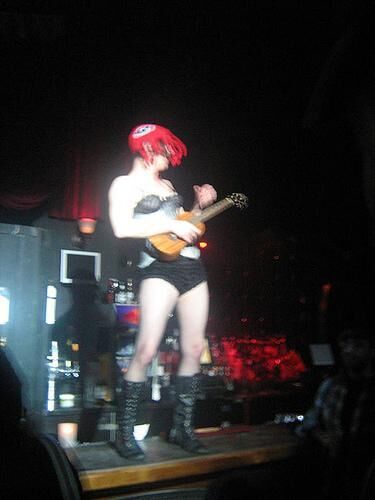 steven said it well this morning.
it’s been a long tour. it’s getting harder to feel.

i’m feeling more than i want, and nothing at all.

people at this cafe leave their portable coffee mugs hanging from hooks on the ceiling.
i will put them in background of photo.

i’ve been biting my fingers too much. they hurt. that means something’s not right.

being at neil’s was just like heaven. we all felt like bugs in rugs.
neil and i signed apology cards for everyone who ordered the $100 pre-order package, and then sent them to kyle, who is signing them too.
so heads up, your book is coming late. sorry…..but worth it. i promise. the front of the card is a gorgeous print from the book. we tried. 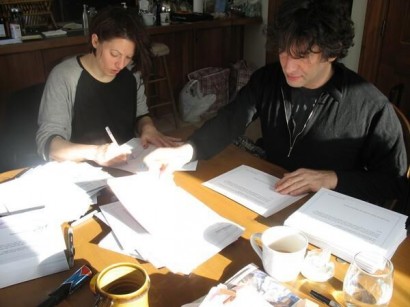 neil and me and zoe and tora and kat went to a trout farm and watched them kill the fish. it hurt. i might go vegan again.
then we ate them. neil wrapped them in newspaper to cook them. and he sort of fucked them up. and got upset. seeing neil gaiman upset about
ruining his fish wrapped in newspaper was the most adorable thing i think i’ve ever seen. we all went for walks. we cooked. we played with the cats
and the dog. life, for a moment, felt more lifelike. neil was the perfect host. he’s one of the most generous people i know.

i keep wondering how i got so lucky to have meet all these wonderful people in my life and then i remember the answer.
jason webley.

we played in denver last night.
me and stevem and tora went to a GLBT drop-in center for teenagers called Rainbow Alley after soundcheck to hang out with the kids.
the good folks of the matthew shepard foundation had set it up.
amazing, weird, heartening, heartbreaking.
and then we managed to sneak 27 of then into the show. a lot of them had never been to a live concert before.

denver is also not many miles from columbine high school.

i told my story about “strength through music” and lyndon, as usual, read off the names of some of the dead.

one of the dead’s best friends happened to be in the audience. she came and talked to me and steven after the show.

there were long hugs, quiet.

a girl with big, thick, shiny red lines of scars on her arms came and asked me to draw something on her cuts so she could tattoo it as a reminder not to cut.
i copied steven’s heart tattoo onto her arm, it was just the right shape. steven finished it. we hugged her too.

i didn’t eat much yesterday.

the altitude was high, it does things to you.

right before the show i looked in the mirror at one point and decided to cry for a second.
i did. it was fine.

i went straight to bed. but before i went to bed i saw steven in the hallway of the bus.
we looked at each other and we held each other and we knew and i stopped and was there.
it was a Good Day
i’m tired. heavy tired.

salt lake tomorrow. then off. then the northwest, which will be wonderful.
we’re almost done with the states. fuck….aie.

one day later –
just got offstage in salt lake.
omg. FUCK the people here know how to scream. i <3 SLC.

aspen, on the other hand, was just BIZARRE.
aspen is a SKI RESORT with a population of a few dozen people. and with a night club in it.
we sold, i believe, 35 tickets.
so we turned the night into a piano karaoke party. lyndon and i played “the rose” over and over again and forced members of the audience
to sing while steven prompted them with the lyrics, sometimes through charades (you should have seen “some say love it is a razor”…..awesome).
chip got footage. will post.

some girl kept requesting “sing” so i sang it. and forgot all the words. so i just handed her the mic and she sang it. and she didn’t know the words either.
it was an incredibly wonderful fuckshow.

tomorrow off in walla walla washington.

keep telling people about the rest of the dates if you know anybody there.
lots of word of mouth has pumped our ticket sales and that has been awesome.
it’s us. tickets & times and everything as always up at amandapalmer.net…..

slight blast from the past/dept. of radiohead:

lee, my wonderful landlord, took this great clip of me playing fake plastic trees on ukulele at bullmoose records (love) in portland, maine on record release week.
i kind of love how simple it is.

a message from steven:

The Danger Ensemble are seeking a sublet or a vacant living space for to 2 or 3 to live in through from Xmas through January in BOSTON.. Not too expensive, centralish, ideally equipped with wifi and heat (coz it’s FUCKING cold in Boston!) Also, looking for a rehearsal or development space (ideally with some lighting and interesting archetectural features) or a local company to partner with for new theatre work being developed – suggestions, recommendations and offer for both of the above can be emailed to steven [AT] amandapalmer [DOT] net…  thank you thank you merry xmas and love.
…………………………………… 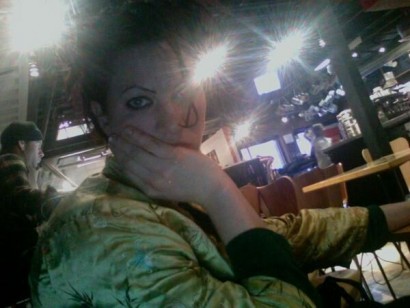