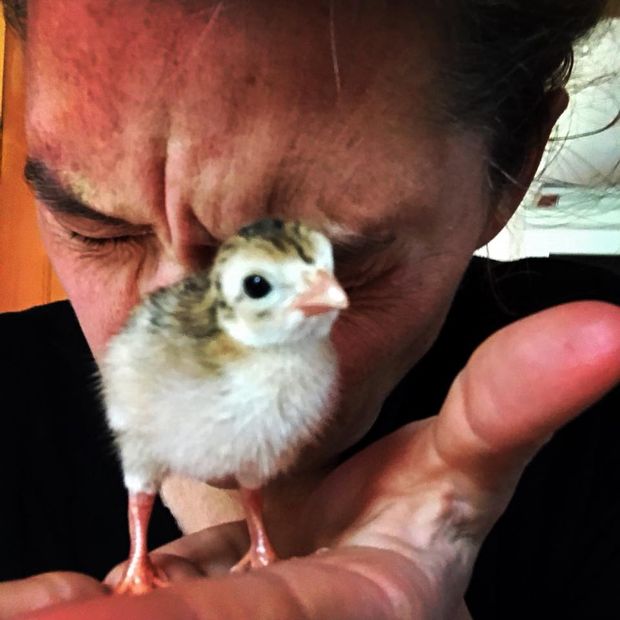 once again, it happened: some soul who was undoubtedly unloved, unseen and full of pain, anger and fear took up arms against the general human race and had enough ammo to take down a village.

meanwhile…i’m having my own dark-gray night of the soul, and the current of current events lands in an already melancholy pond.

i woke up this morning in a foul mood.

neil brought good and bad news back from london.

i was in a wonderful place, having spent (i shit you not, and i have corroboration) five straight days cleaning out the house we currently occupy in upstate new york. the mystery house of mystery….the place neil gaiman hides and where we co-habitate in secret. the place we’ve been living transitionally for about two years now. the unopened boxes have been symbolically unopened for a long time.

nothing in them was critical. but there they….rotted. waiting for a non-forthcoming plan.

so i finally started unpacking. and neil and i finally made plans for the winter. things were looking tidier, the bleak started to clear. then he came home with news that his filming (for Good Omens) is going brilliantly, but also that our finally-laid winter plans got smashed to bits by unexpected work schedules and foreign locations. we’re also in a continuing childcare crisis (does anyone know a native french-speaking nanny who is awesome may be free? we’re hunting.)

goodbye, plans. you were delicious for the week i knew you.

our neighbor caroline bought a batch of baby guinea fowl the other day. they started dying, one by one. they supposedly send you extras because there’s always some that die off. how awful is that?

she’s at her own wits end and her personal sorrows were getting amplified by the dying chicks. what can you do? you put them in a box, you follow the directions, you put them under a light, you water and feed them. but still, they were dying.

we’ve gone to visit them every day in their small box, hoping that they’d hang on and survive. ash wouldn’t go upstairs to see them last time. neil thinks he was too frightened by the dog; i think he’s too attuned to their tenuous hold on life and knows better than to visit the land of the liminally living.

i woke up today to the text: “have you seen the news?”, which is never a good text to get. another shooting, another batch of humans plucked too early out of life’s stream.

i sat there crying on the porch, and then all i wanted to do was go to caroline’s house to visit the survivors.

all i could think of to do was share some video of the survivors, so i did a periscope (twitter live-stream). one of my twitter followers had an aunt who died in the shooting.

some survive. some die.

i didn’t include a pan down in the broadcast of the one that had just passed away, lying limp at the bottom of the box. i couldn’t bring myself to share anything but the living ones.

and then the usual insanity. the platitudes. the empty “we send our prayers, the families are in our thoughts…”

the cries of the surviving birds. their small tweets and cheeps and yearning for the light, and for life.

do they even comprehend that their brothers and sisters have died at an alarming rate? that one of them is lying right there in the box? i think they’re too young to understand.

the songs i want to write. maybe some will die off. maybe i should write extras.

the song i put out last month, and the song i put out last week…i’m so proud of the work i’m doing, so proud of getting back to the task or writing and taking soul-food from you and from the atmosphere and from the news that’s becoming ever more frightening and overwhelming and soul-crushing, and turning it into something i can put onto tape. but i also can’t escape that old feeling the system isn’t built to contain this way of doing things.

the facebook post announcing “small hands, small heart” got less engagement than almost every random thing i posted on facebook over the course of the week, and i threw my fucking hands up.

i refuse to become clickbait. chickbait. i refuse to try relentlessly to attach viral fodder to the headlines of my art and make people press a button.

i know that my work matters. and unlike so many other artists struggling out there, i’m luckier than so many of them, having built a system like this patreon that puts a roof over my head (and my staff’s head) and pays our costs and rent while i write.

but i always wanted to believe in a systemless system. i always wanted to believe that publicity and reach were secondary to writing. i know i’m wrong, but it’s such a bitter pill to have to swallow when you’ve spent 34 hours working on a song and you watch it get less engagement because it isn’t a feminist rant, a provocative remark about taylor swift or a picture of a baby.

not that those things aren’t important. but i feel like a fucking failure when those things weigh more, by facebook standards, by a factor of ten, than the actual art that i struggle to put into the world.

someone told me today that tom petty died.

then i googled and found out that the reports were wrong. i saw someone tweet: “If the Tom Petty situation confirms anything for us, it’s that journalism has been taken off of life support and is officially dead.”

gravely ill, but not dead.

i love tom petty. i grew up listening to his music. one by one, musicians are dying. being born, too. someday i’ll die. i’ll leave a body of work behind me. i’ll try to have done something. i’m doing it now.

i think i may change my approach, for a while at least.

i may start making music just for you guys, and go back to the old paradigm, which i hate to admit is a Thing, of waving a flag around every once in a while to let the fickle public know that it’s the One Moment Where We Expect You To Pay Attention. it’ll make me feel a little sick, but i’ll do it.

i do know this:

these last two songs taught me something.

i am going to set aside time every month to do this: to write and record. to make music about what is going on, come hell or high water. i’ll come to you. maybe it’ll turn into a record, or something, but i’m starting to think that forcing my work onto the public isn’t even the point anymore.

want some music? i’ve got some. i’ll make some. i’ll hide in this cave and never come out, maybe. the cave will grow and get warmer. people will bring wood for the fire, wine, and food. it’ll be ok.

i won’t totally hide. there will be other projects, all the Things, the videos, the bizzaro art-projects that i hope you’ve come to expect and be delighted by. but as far as songwriting goes: i am going to force myself into a chair and make myself write, like clockwork. and the songs, like “drowning…” and “small hands…” may be demos, but they’ll be immediate, and you will know them by the sound of their urgency. then…whatever. i’ll arrange them with a band. the dresden dolls, or a new band, or some combination. but this writer underneath will be unshakeable, and she’ll have an army of patrons behind her, encouraging her to write and create no matter which way the winds of change and chance and facebook and the goddamn music industry blow.

i hope you can all get on board with that.

meanwhile, i have literally no idea where i’m going to be living this winter. i’ll get back to you.

after the first batch of chicks died, i got a text from josephine, caroline’s daughter. she’s 14. she asked if she could borrow my keyboard. of course she could.

she wrote a song inspired by the dying chicks called “i’m in love with a dead man.”

i listened to it. it’s really good.

long live all the survivors.

look for the helpers.

i love you all so, so much.

thank you for giving me the wings to cry.

xx
a
p.s. i want you to read this poem, if you have another second.

A Few Words on the Soul – by Wislawa Szymborska

We have a soul at times.
No one’s got it non-stop,
for keeps.

Day after day,
year after year
may pass without it.

Sometimes
it will settle for awhile
only in childhood’s fears and raptures.
Sometimes only in astonishment
that we are old.

It rarely lends a hand
in uphill tasks,
like moving furniture,
or lifting luggage,
or going miles in shoes that pinch.

It usually steps out
whenever meat needs chopping
or forms have to be filled.

For every thousand conversations
it participates in one,
if even that,
since it prefers silence.

Just when our body goes from ache to pain,
it slips off-duty.

It’s picky:
it doesn’t like seeing us in crowds,
our hustling for a dubious advantage
and creaky machinations make it sick.

Joy and sorrow
aren’t two different feelings for it.
It attends us
only when the two are joined.

We can count on it
when we’re sure of nothing
and curious about everything.

Among the material objects
it favors clocks with pendulums
and mirrors, which keep on working
even when no one is looking.

It won’t say where it comes from
or when it’s taking off again,
though it’s clearly expecting such questions.

We need it
but apparently
it needs us
for some reason too.

another song? why the hell not. let us make it. now.