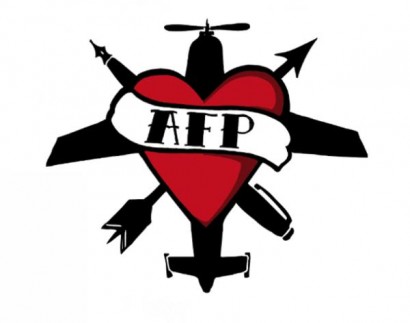 if you love me and want to give me something…..

please, send someone my music. or link them to the new evelyn evelyn record.
or if you’d rather, a link to your favorite amanda/dresden dolls YouTube link.

if you haven’t downloaded the new free-or-donate song, download that bitch for my birthday and consider it your present to me. and then email the link – http://amandapalmer.bandcamp.com/album/do-you-swear – to someone you think might like it. tell them your birthday to me is your email to them.

if all this seems like too much trouble, just do one surprising thing to someone today. that’ll do just fine. smile at a stranger.

…….
(and now, some random assembled blogging weirdness from the past few days)
…….

i’m driving to berlin from hamburg and blogging from my phone. the whole evelyn evelyn crew is having dinner tonight at my cousins and are being met by neil, my sister, melissa and elyas from nervous cabaret, my old punk friend jan who’s a cook at white trash, mat devine from kill hannah, and sue denim from robots in disguise who’s got a berlin dj gig. parrrrrrrrty.

last night we played in hamburg.
we twittered last minute for a place to stay for jason, sxip and eric and a german girl named frederike volunteered. as it turned put, she didn’t know my music, or the dolls, or evelyn evelyn. she just follows me on twitter. it’s official: i have twitter fans. i know because my crew sleeps on their floors. wow.

holly gaiman and i, on the other hand, booked a cheap hotel last-minute because i had to have a blank space for a video and photoshoot for u magazine this morning.

we entertained the people of hamburg and ate a LOT of cake and beer and cupcakes. holly killed at the merch table again. when we got to our hotel by 2 am it was locked and we went of on an adventure to find an in TNT would let us sleep in their stable. we got to sleep at 3 am, and the camera crew came at 11 am and shot me in bed. 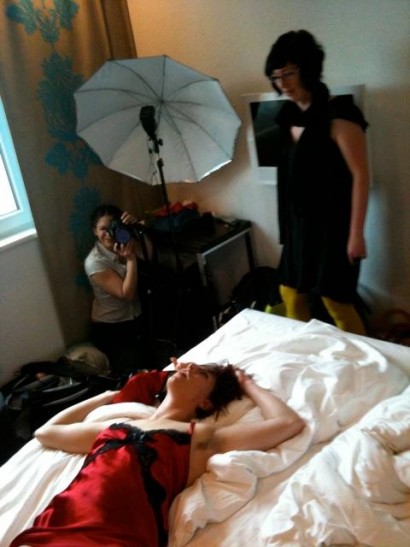 i sang “fake plastic trees” for them and cried. i’m really really tired.

in london, i lost my passport, and did not realise this until holly and i were trying to board the train to paris. we grabbed a cab and spent the day at the american embassy with 12 babies and their ex-pat parents. i learned that when you are an ex-pat in england and you need a baby passport, you have to sit all day in the embassy with the other cranky ex-pat parents and the rock stars whose passports have vanished. the embassy cranked out an emergency passport for me me and we made the last possible don’t-miss-the-show train by about 5 minutes, no exaggeration. it was fucked.

we slayed paris, stayed with another family woth four kids, and then drove to amsterdam, where jason webley successfully and proudly navigated the narrow streets of the city center and then, one half block from the venue, crashed into a police car. we were already 2 hours late for soundcheck and they hauled him to the station, which was thankfully across the street. they let him go with NO paperwork saying “it was an accident! we would be sure if something like this happened in america police would be understanding!”

we didn’t burst their bubble.

we just picked up some awesome punk hitchhikers outside hamburg. one from italy, one from argentina, one from portugal. they’re headed to the chaotic day of punk anarchy that happens in berlin every may 1st. our show should be off the hook.

here they are (skip in front right, our tour manager, on phone – of course – eric, back right): 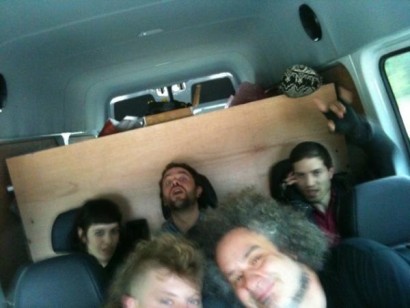 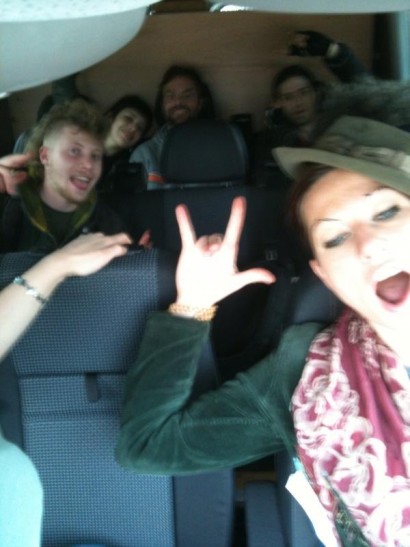 i have a backed-up blog of all the london madness, will try to get it all up soon.

the twins have been doing very well and getting over their stage fright gradually.

they’ve done several big photohoots. here’s a picture of them doing a shoot for bizarre magazine in london: 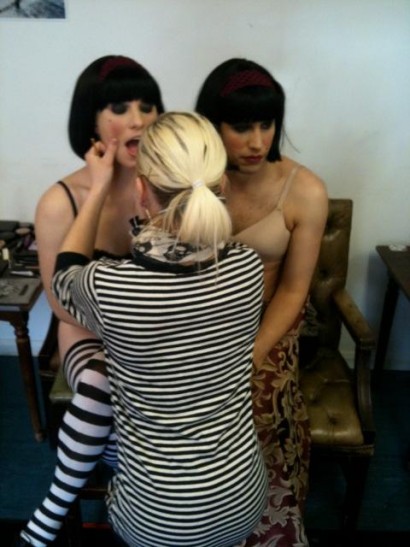 and a video for the fly: 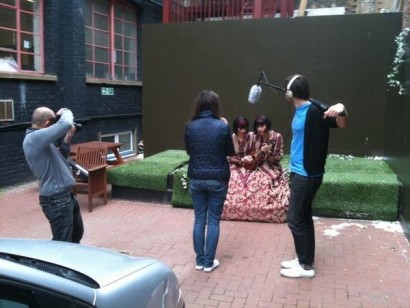 other surprises of the day:
neil – on his drive to inverness to fly to berlin to meet us tonight – hit a stag on the road. he sounded quite frazzled on the phone.

my life has moved forward in so many ways and in some ways, it’s gone sideways and backwards, but i know that right now i’m about to sit around a table with so many people i love… 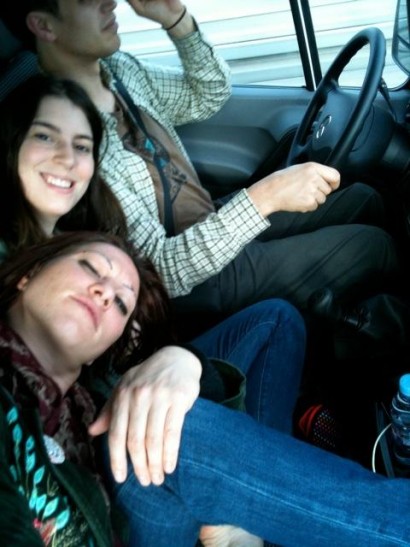 i made my life this way.

i wouldn’t want any other life, shitty long van drives, terrible aching body and all. 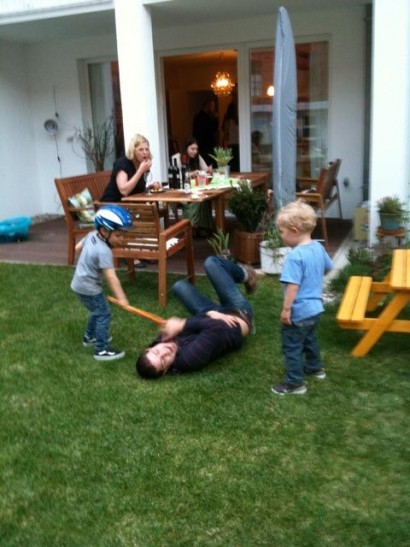 we’re about to hit a crazy berlin party called Death By Pop with sue denim and That Chick From Elastica DJing.
life.
lifelife.