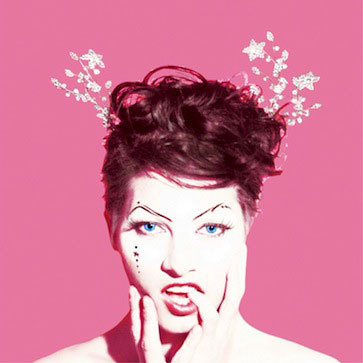 i have barely sat still since landing in berlin….my life has been a crazy rockstar-art-videogame.
seriously – this shit has been OFF THE HOOK 24/7.
my band is all rocking it HARDCORE and lots of members of Team AFP are over here making It Happen.
superkate has been pulling double-duty as assistant and organizing the art shows, and eric has been dealing with random logistics.
our tour manager, jaron, has been making sure the band are all AWAKE in time to do shit stupidly early in the morning. ok…he does some other shit too, but i firmly believe his highest purpose is to wake us all up. i have volunteered in advance to be the waker-upper once we get on the fall tour bus, ever since i discovered that the “demo” song on my KeyTar is “Last Christmas” by WHAM!….can’t wait for fall, can’t wait for fall. i’m picturing a morning ritual when i show up at somebody’s tour bus bunk who must be awakened. then i whisper quietly in their ear. “jherrrek…jherrek….” and then BAM:

OK, news, as fast as my little fingers can type and cut and paste it.
neil just came and joined me in london and i’m sitting in a bed in london with one hour to go ‘til i need to leave for the gallery soundcheck.

first of all – yesterday on twitter i revealed the the ALBUM COVER for “THEATRE IS EVIL.”

i warn you, it’s EVIL. evil in the biblical sense. since it’s PINK.

i love this photo, and the minute i saw it over a year ago, it screamed album cover. so…i made it the album cover. 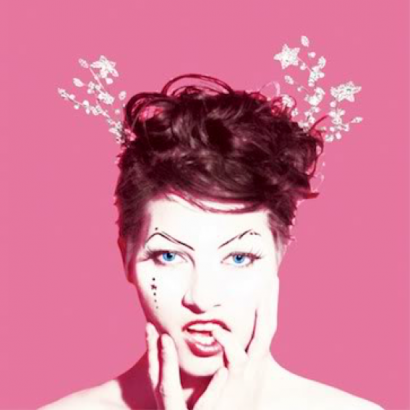 the photo is by Desi, who snapped it backstage at the “map of tasmania” video shoot we did in new york.
there’s something about it. it’s creepy, it’s classic, it’s weird, it’s “pretty,” and it’s sort of…..evil.

i also think it’ll make a fabulous poster and t-shirt, done up with all different background colors for those of you who DETEST PINK
(and believe me, twitter has informed me that you are a veritable ARMY).

in VIDEO news….holy fuck we’re flying.
jim batt just sent us the cut of the video we made in melbourne for “want it back” and it’s INFUCKINGCREDIBLE.

and the very same day we got it in our inbox, we spent 15 HOURS (almost straight) shooting a video for “the killing type” with british music video legend Tim Pope.
the man is a genius and when the video comes out, you’ll see why. i say not more for the moment, but you’re going to lose your shit when you see what we created.

and miraculously…..we had the money to go over budget when a last-minute emergency came up.

there’s TOO MUCH TO TELL, and TOO MANY PICTURES.
this is the problem with trying to blog from tour. since i’m so fucking busy DOING and MAKING things 24/7, re-transmitting gets hard.
luckily i have sean and kate to help sort and pull photos…but it’s a classic problem.
i need a full-time blog assistant…a second self who just sits behind the machine. it’s the last thing i want to do at the end of a long day of performing, and once i sit down with enough energy to relate it back to you, the news seems OLD and OVERBEARING since so much is happening. it’s why i love twitter, my constant low-stress transmission stream machine.

and on a dorky note, i’ve been mis-using my tumblr account for years as a normal blog platform, and might change that so i can tumblr along for real with the rest of humanity.
that would make life easier as i could transmit happenings in real-time (a la twitter) instead of letting shit pile up and up and then sending these blogs with 24 pictures over
to sean (which is literally how we post our blogs and backer updates nowadays).

SO….i started my trip in berlin with a trip to the bookstore.
so i could find individual gifts for all the kickstarter VIPs that were coming to the party the next night….
luckily my friend lesley dean lived above an english-language bookshop and we HIT IT HARDCORE…. 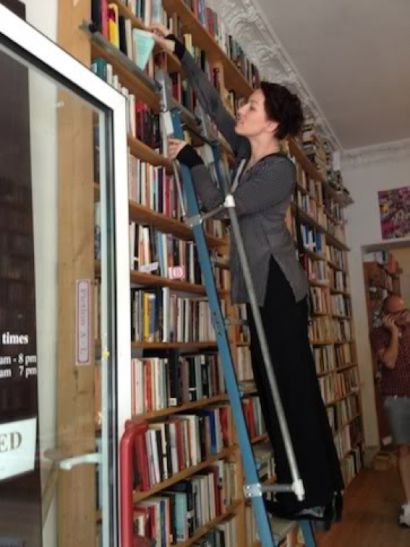 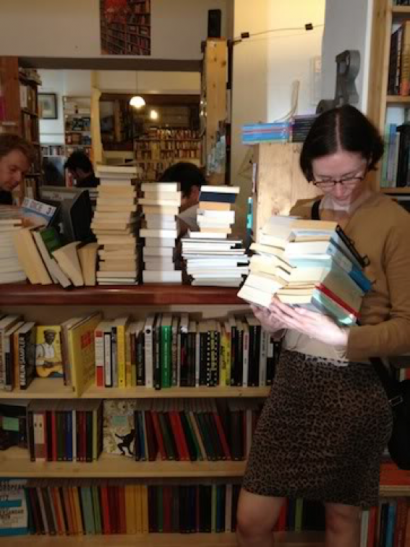 90% of the books were ones i’d read and loved, though in the art department i just picked SHIT THAT LOOKED COOL: 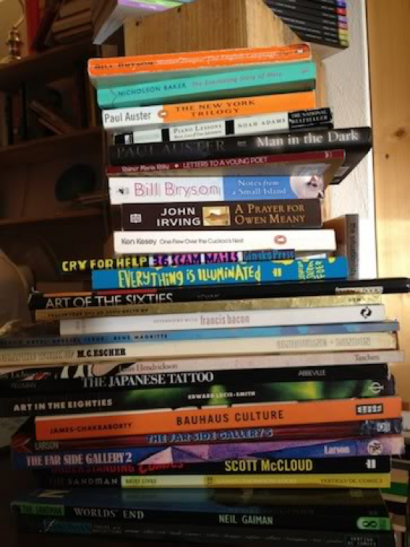 they had a total of 12 neil gaiman books in different sections. i bought them out.

i opened up one of the books in my ever-growing pile (we bought 100) and i LOVED THIS….read it: 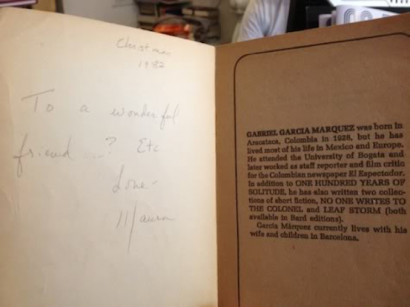 i like the idea that i’m taking my kickstarter money and pumping it directly back into the local economy….via BOOKS.

the platoon gallery were the PERFECT HOSTS.
we were the FIRST PEOPLE to use their new location…they had just moved into this raw space from across the neighborhood. 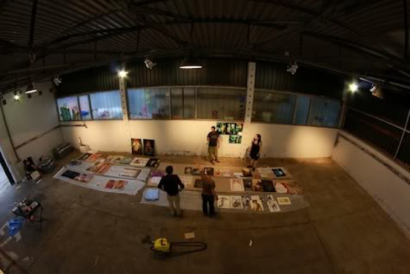 the crew (eric, superkate, and jaron) flew in from the states and busted their asses to get the art up in time (if you look at that first pic, you can spot eric and kate working with the crew to get things readied and hung). in just a few hours, they took a giant cold space and gave it LIFE. 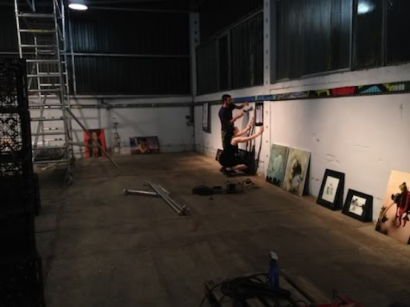 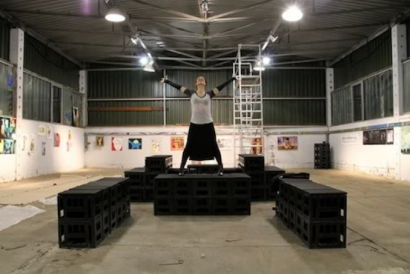 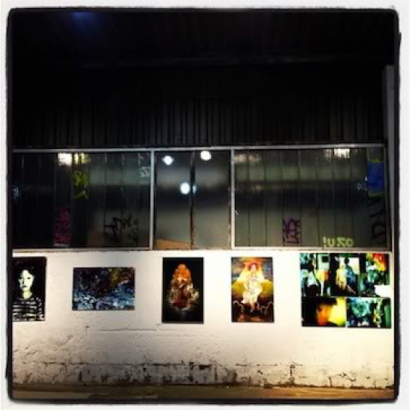 from the left….a peek of neil and kyle’s BED SONG photo series, two paintings by meghan howland, a bit of hans rickheit…. 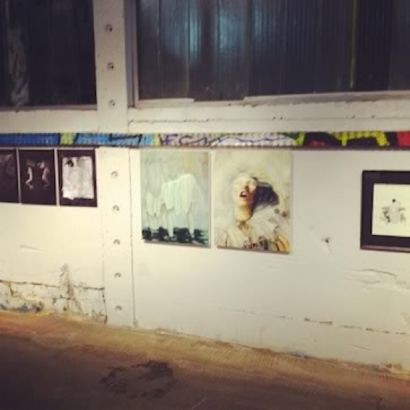 shown here: portraits by nicole duennebier, judith clute (whose bed i’m literally sitting in as i write this), and cassandra long: 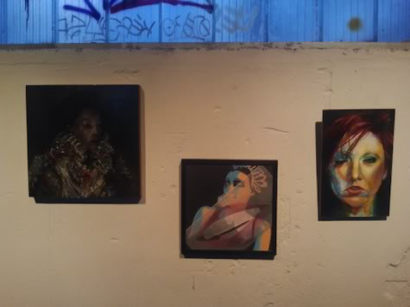 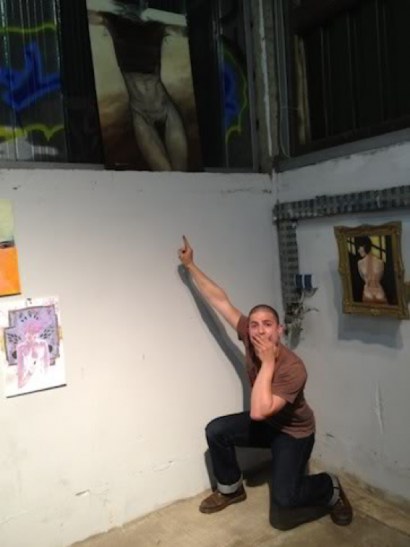 the space, before opening (al set up for the string quartet): 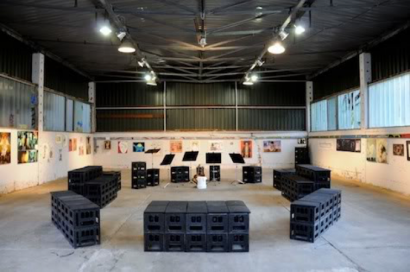 people hanging outside the gallery….. 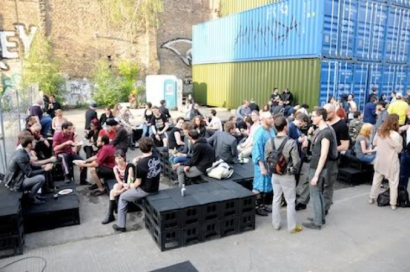 note the giant platoon-created-“AMANDA”-graffiti above everybody’s heads….
they call them “flying containers” because they can hook them up to a crane and tetris them all around to create different show/performance spaces.
AMAZING.

COINCIDENCE DEPARTMENT:
the night before the gallery show i was wandering outside the gallery and ran into a friend of mine from the san francisco based EXTRA ACTION MARCHING BAND.
the dolls played with them back on new year’s eve in ‘06. they’re a RAD group of weirdos…my kind of people. and this is what i love about touring sometimes….you turn around and
holy fuck! friends next door! we ran over to catch their show, which was being held in a place i’ve been to often (it’s a berlin ex-pat hangout) called White Trash.
they were TEARING IT UP…. 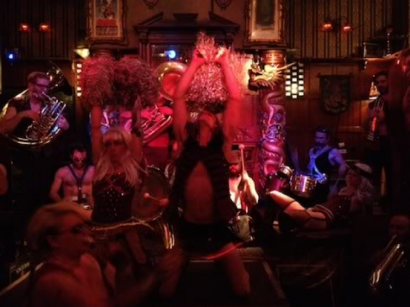 ….and so we invited them to come and BUSK outside the galley opening the next day. they came…. 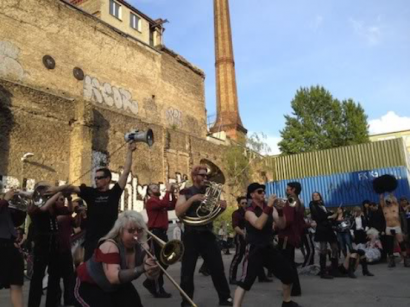 …..and we passed the hat.
they made enough money to make it worth working on their off day….and they whipped everybody up into a pleasant frenzy before the night officially started….. 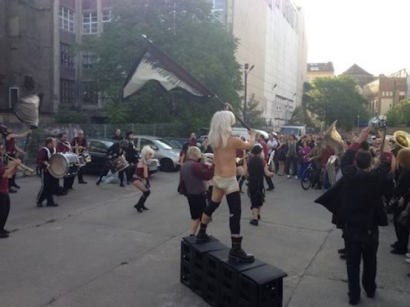 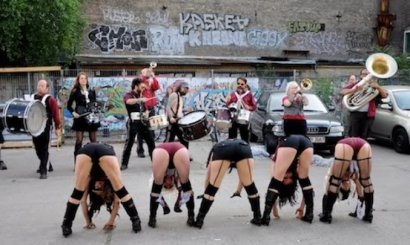 the doors OPENED….
and here’s princess hans, entertaining the crowd once they got inside: 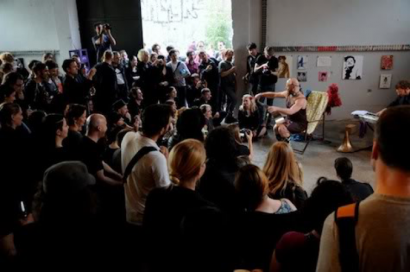 here’s Christoph – who helps keep this place running and working – explaining the gallery’s history and upcoming events to the assembled crowd…. 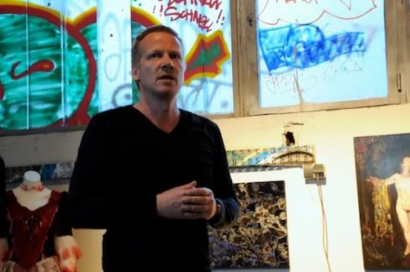 and then, WE PLAYED: 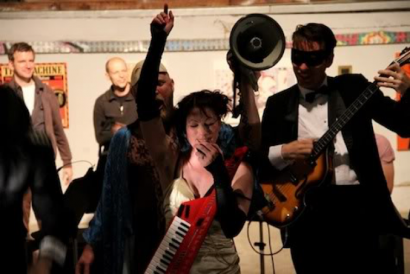 the best thing about these little kickstarter-only shows was playing ON THE FLOOR, TOTALLY ACOUSTIC – no speakers, no microphones….just everybody in a circle and us making music.
it worked. 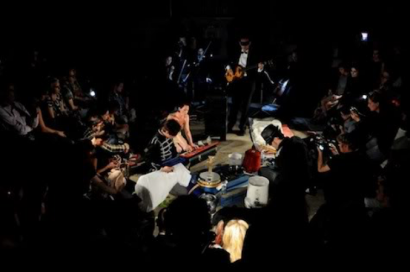 and then….LOTS OF OTHER THINGS HAPPENED.
BUT IF I TOLD YOU I WOULD HAVE TO KILL YOU.

it was a little nerve-wracking, to be honest.
people paid REAL MONEY to gain access to this show (the ticket totaled well over $100 if you subtract all the merchandise & rock show ticket out from the $300 package).
i felt like we had to go overboard to make people feel like they were getting something priceless.

i think we managed to do it. a few people told me it was the best night of their lives. i can’t explain how good it feels to hear that.
my team truly came together, last minute drama and all. i owe them more gratitude than i can possible say.

anyway…..
i’ll blog all the specialness when the whole art tour is over.
the night was fucking magical. i’ll leave it at that….and we’re about to do it all again tonight in london.

the ROCK SHOW in berlin was a big, beautiful chaotic mess. 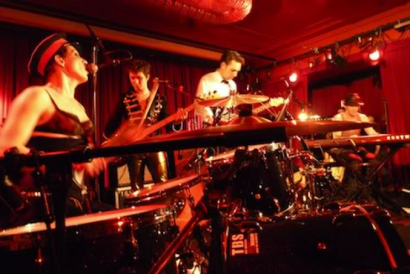 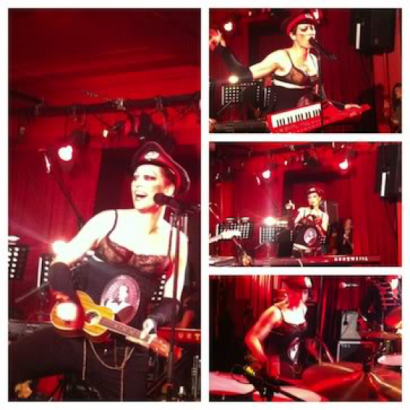 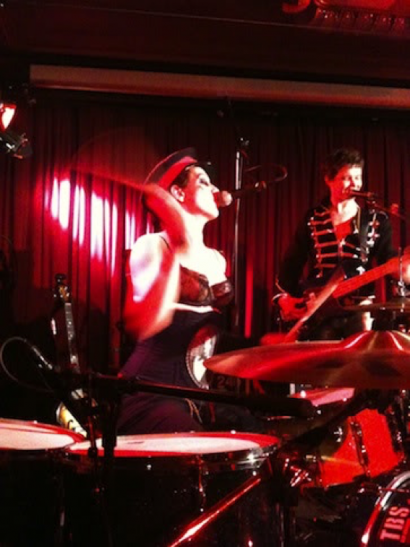 the event space, which is a big theater complex called the volksbühne – literally “the people’s stage” – somehow they had double-booked the night, and we were told that we could only play up to 99 decibels. in plain terms: this meant not really using the drums. we had a showdown. i threatened to pull the show.

the entire band and crew had “war room” meetings all through soundcheck and we created a plan B in case we got shut down. we sent michael in a car to go pick up our acoustic instruments from the night before. we left all our bags in the dressing room packed and ready to go and if for some reason they pulled the plug, we were 100% prepared for a mass exodus, acoustic rock picnic in the park outside.

we started our set relatively quiet and managed to not get kicked out. which was, in a childish way, sort of disappointing. no picnic. that’s the 12 year old in me talking. the grown up was extremely relieved that we didn’t have to go ninja. and the show was transcendent. we DID get the entire crowd shaking their fists at the venue to our left, chanting

if you’ve never heard a group of hundreds of germans chanting that and shaking their fists at “the people’s theatre” next door, you haven’t lived.

and it’s a pity THAT didn’t make it on the record. what a perfect opening it would have been….. 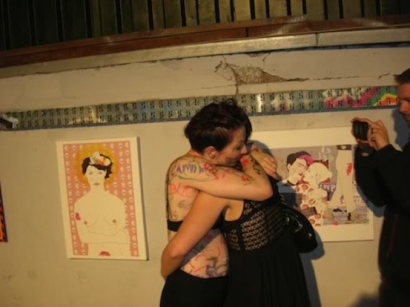 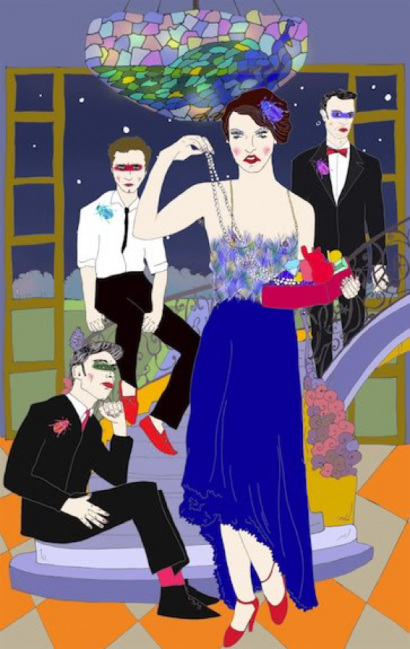 the snowball snowballs and colors bleed into the future……