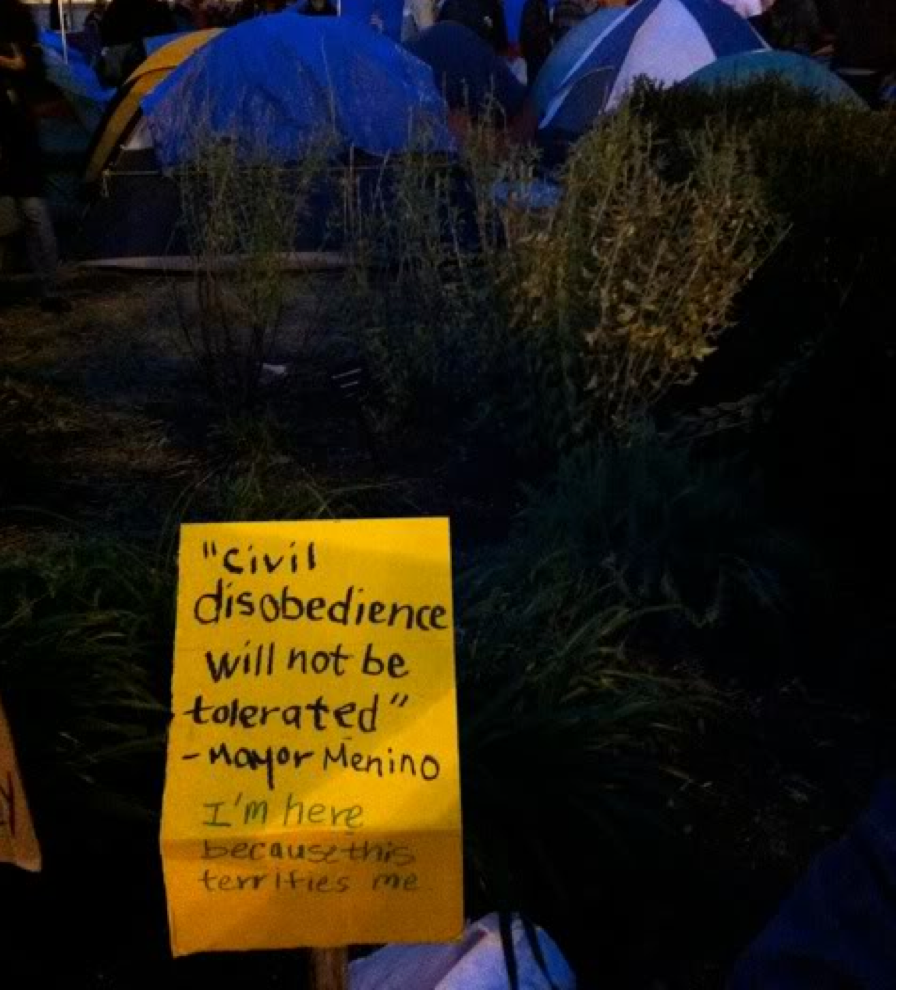 an open letter to mayor menino, from amanda fucking palmer.

last night i went to a rally that lasted several hours in roxbury (a neighborhood of boston proper) called “occupy the hood”, just a few blocks from where i live.
roxbury is what local boston folks would refer to as The Ghetto. almost all black. shitloads of gangs, crime, and drugs.
this rally was a unique offshoot (and the first of its kind) of the #occupyboston movement; it was organized by a bunch of local folks who wanted to use the energy from #occupy to mobilize action around their local discontent.

here are some pictures i took…. 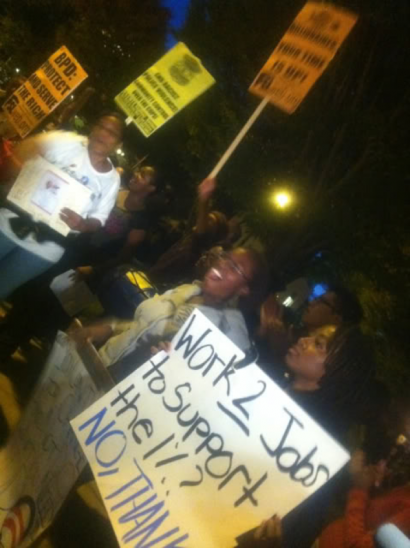 here’s the reverend william dickerson, speaking to the crowd.
there was lots of talk of martin luther king, and what’s already been fought for…. 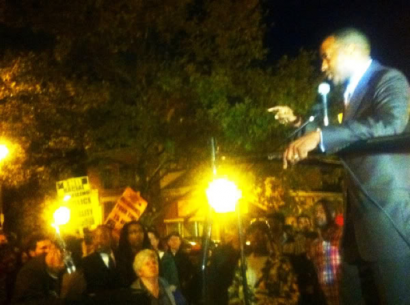 later, pastor Paris Cherry said: ““We are living the dream MLK was talking about, people from the suburbs and inner cities marching together for the betterment of the people.”

here’s a group of girls, all black, aged 7 around to 13, all speaking up about what a bummer it is to not feel safe from violence while walking to school (or to the corner store): 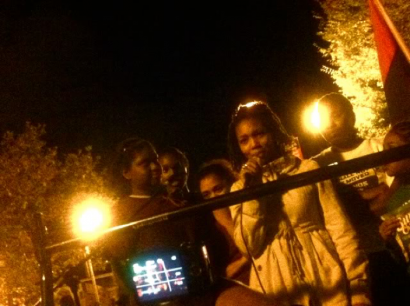 a couple of kids from the hood held aloft some huge, bad-ass paintings they’d made…and there was a great rallying cry about youth-creativity (and supporting it): 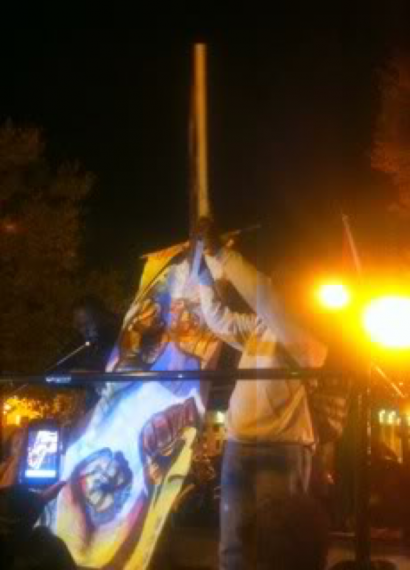 you readers from the UK and australia may find this shocking, but there are folks (usually young ones) shot in my neighborhood on a monthly, sometimes weekly, basis.
it’s normal news. i hear gunshots at night, and don’t think twice about it.

boston, for all it’s liberalism, is an INCREDIBLY segregated city. i live on a street that acts as an almost shockingly literal black/white divide: pretty much everybody to the north of my street is rich and white, and pretty much everybody to the south is poor…and black or hispanic. it’s no exaggeration. it’s like oil and water…and the saddest part, is that you rarely, if EVER, see the two groups intermingling.
people stick to their sides of the hood, almost exclusively.

last night, watching all the white students (and general members of the white community) trekking down to dudley square, listening to, meeting, and bonding with the black members of roxbury…was incredible. it felt like the building block of true progress – because the general point of #occupy is becoming clearer and clearer: NO change in the system, of ANY SORT, will be made unless the actual day-to-day citizens of america get off their asses, talk, bond, and organize with each other for a better system. WE have to get up, talk, isolate the issues, dialogue, attack, fix. laziness – and expecting other people to make the decisions for us – is what’s gotten us into this jam in the first place. it’s the only way. and it’s happening. slowly, but surely…and with a lot of jaded eye-rolling, but it’s happening. one by one, people are stepping out of their comfort zones and speaking up.
tonight, noam chomsky spoke to a crowd of over 1,000 people at the main site at dewey square: 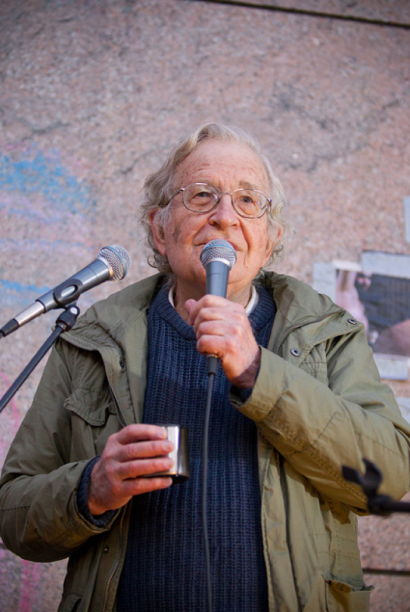 it was hard to hear him, because the amps weren’t powerful enough to radiate to the number of people who came…
(here’s my picture from where we were standing….noam is in the little white blur…) 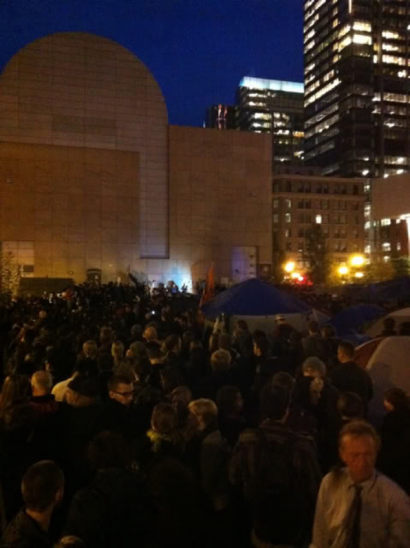 …but the organizers quickly put together a telephone conference number so people in the crowd could PHONE in and listen. it was still hard to hear, but it was hilarious to be in a crowd of people who all had their phones to their heads.

noam warned that this must be “long struggle,” and people with power don’t yield power easily….

and winter is coming.

and the artists are coming.

we ran into my old friend markus nechay, who was there, painting with his friend scott.
markus’ was painting live portraits of people at #occupy, filling in entire pyramid with the faces of the 99%…. 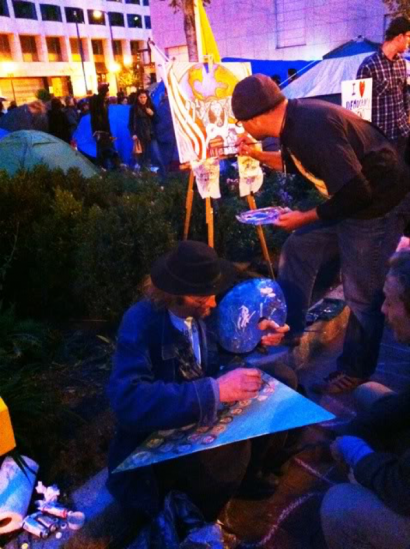 and then, a few feet away, i stumbled across this sign: 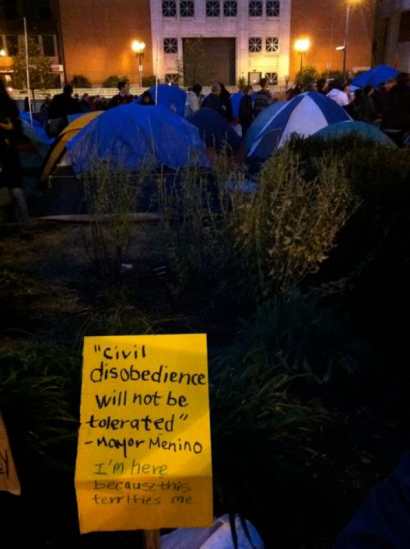 i found it hard to believe that a mayor of massachusetts would say something so flagrantly un-American, so i got home an googled.
sure enough, mayor menino said it loud and clear in an interview with new england cable news (you can see the interview in its entirety HERE: http://www.necn.com/10/11/11/Mayor-Menino-on-Occupy-Boston-arrests/landing.html?blockID=575486&feedID=8498

who ARE we? this disturbs me, a lot. here’s my letter to the mayor:

I was distressed to hear your words during your recent interview with New Englad Cable News.

Here is a quote from our own Massachusetts local hero, Henry David Thoreau, whose essay “On the Duty of Civil Disobedience” was REQUIRED READING WHERE I WENT TO MASSACHUSETTS PUBLIC HIGH SCHOOL:

“Disobedience is the true foundation of liberty.”

Mr. Mayor….please don’t FIGHT YOUR CONSTITUENTS. LISTEN TO THEM.

Don’t forget what happened in Boston about, oh, 200 years ago. Don’t forget we’d be living in a very different city had it not been for some brazen acts of “civil disobedience.”

In our state, we have a civic holiday on April 19th to celebrate Patriots’ Day, and we picnic and prance and set off fireworks rejoicing the fact that a bunch of Minutemen (who were basically scared, average citizens) in Lexington and Concord boldly engaged in life-or-death acts of civil disobedience that led to the independence of this country, and you have the nerve to say that you won’t “tolerate” peaceful civil disobedience in the city of Boston?

i doubt he’ll send me a cheesecake or a souvenir of the state house.

but it felt good to write it.

i’m also going to email it to him.

….and if you feel like directly supporting occupy boston, there’s a KICKSTARTER to create a newspaper called the “occupy boston globe” to distribute information amongst those in the city with little or no access to internet. at this moment they’ve crowd-funded a little over $7,000 of a $8,000 goal and have six days left to raise the rest. a little bit will go a long way, go support: http://www.kickstarter.com/projects/obg/the-occupy-boston-globe?ref=live

if you’re in boston, and want to donate MATERIALS, the occupy guys need fire extinguishers and other materials as the crowds grow. please follow their twitter – @Occupy_Boston – and go to their website to donate: occupyboston.org

an open letter to washington about SOPA (from amanda palmer, trent reznor, the lonely island & others)