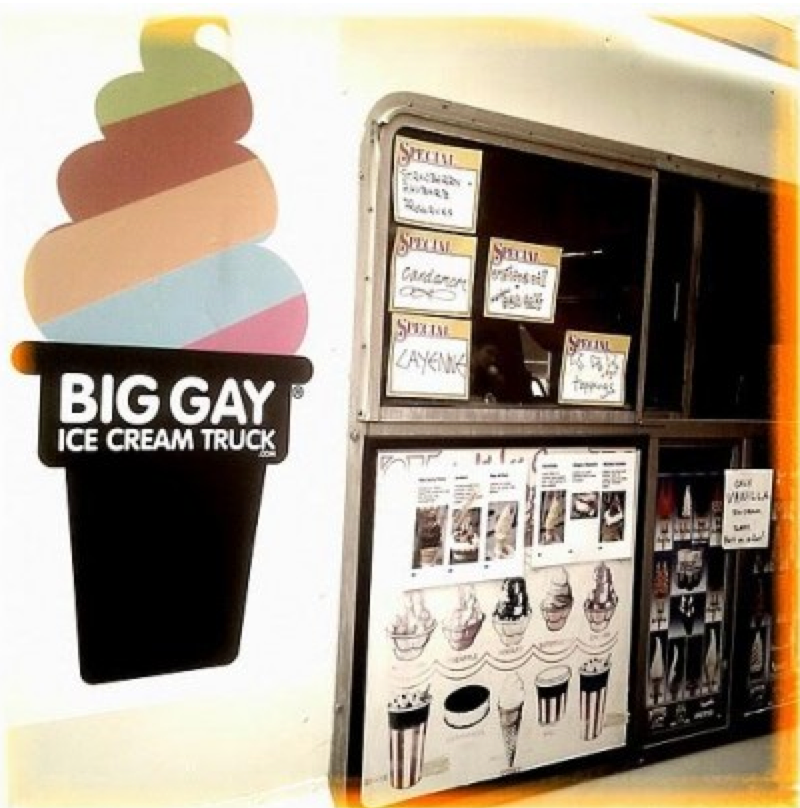 arrived home in boston last night via train from new york, where i spent four days in the wonderful hot and rain. today, we start the rehearsals for cabaret.

the record has continued to do really fucking well. i’m so proud…of my team, of you for helping me and donating and spreading the word, of the world for being happy about it. fuck yes, double rainbow all the way.

we’ve had lots and lots and lots of requests for a vinyl re-print, since a lot of people wanted it (and didn’t get before it sold out), so we’re trying to figure out exactly what we want to do next to make sure the people who ordered the limited red vinyl don’t feel in gypped, in any way.

in press news, the blogs and tech music sites last week all caught wind of the fact that it WORKS to put a record out like this.

there is so much we can do now that i know this works. don’t go away. stay here. it’s time to make some new musics.

don’t know how, what, or when, but whatever it is, it’ll be awesome.

(and of course, if you’ve been living under an AFP-proof rock, you should go HERE and see what the hell i’m talking about)

here is a very lucky thing about being with neil gaiman for four days when he has decided to be obsessed with his new VIGNETTE app for his android phone: he takes pictures of EVERYTHING.

so handy for the blog. all the photos below are by himself unless noted.

we showed up in new york thursday just in time to hit WNYC, which was the main purpose of being down there….i did a long-form interview with kurt anderson (who i’d already met, totally coincidentally, at neil’s “stories” event a while back)….we talked all about life, the record, radiohead, ukuleles, neil, the works. it was one of those God Why Can’t All Radio and Press Be Like This moments…interesting, wonderful, beautiful, deep conversations about real shit. i like that. i hate bullshitting on 3 minutes of airtime and just plugging product.

i will definitely give you a heads up when the thing airs…probably in a few weeks. 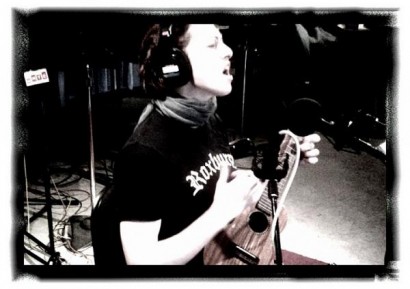 the BIG GAY ICE CREAM TRUCK is EXACTLY what it sounds like.

it all started back when i played with the boston pops and the BASSOONIST started tweeting at me.

i was like: this is awesome. the boston pops bassoonist is tweeting at me? amazing. but why is his handle “BIG GAY ICE CREAM”?

my curiosity was laid to rest when i found out what his day job was (when not bassoonisting for the most well-known popular classical orchestra in the world). 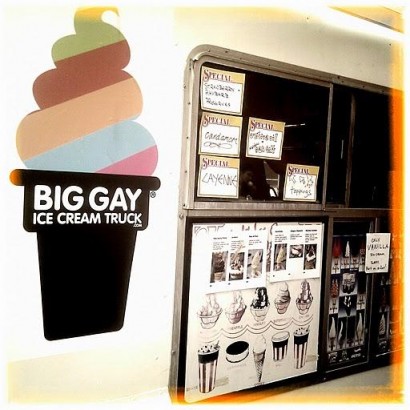 beth became twitter-friends with him and a trip to the truck became a necessity. here’s beth and her girlfriend kayla, eating a flavor that doug created especially for neil called AMERICAN GLOBS (which doug talks about on his blog, which is HERE): 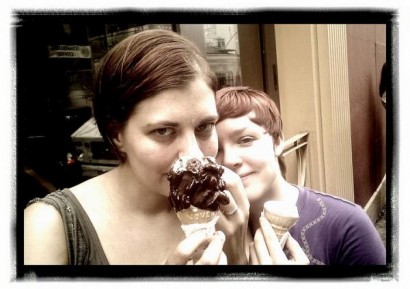 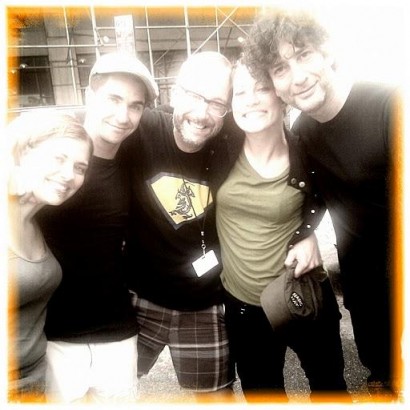 (photo on neil’s phone by kayla)

i had a fantastic long-ass meeting with my publisicts. they don’t usually get much attention, since they’re busy getting me attention, but my downgirl sarah and downboy aleix at girlie action are a huge part of my life, especially now that i’m flying so independent & label-free. they’ve been doing a miraculous job. if you see me in a magazine in the states, chances are, they made the phone call and pitched the article.

a meeting with a publicist sounds boring but with these guys it ain’t…i got to sit down and tell them about all the wonderful going on and strategize about how to tell the world what when. call me a dork, but i acatually love that part of the job.

if you’re wondering where your donations went, i can tell you: many of them paid to take neil gaiman on a date.

we realized we’d never gone on a real date.

we ate sushi and i wore a pretty dress: 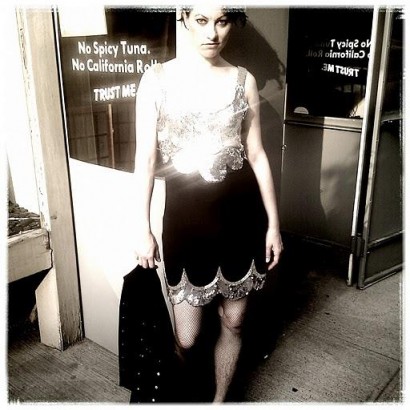 i bought us tickets for a musical. we went to see FELA. (it was really good, too tired to give a full review. fela kuti. nigeria. wiggling bottoms. brutal politics. amazing amazing acting. killer sets and lights.)

then we had a brunch (well, first we slept) with the wonderful and fucking hilarious-perfect john cameron mitchell.

john is making his opera face: 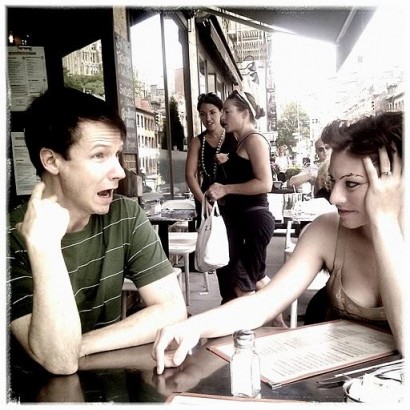 in exchange for the date i took him on, neil humored me while i looked at used clothing.

he is nice, did not complain, and while he did not try on all the women’s clothing with glee like some male friends i have, he did photograph with gusto: 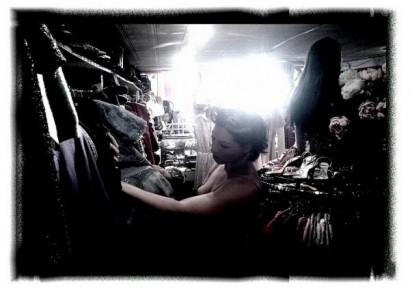 then we went to sxip shirey’s record release party at the city winery.

the venue was wonderful and the food was great and sxip KILLED it with a string of fantastic special guests. 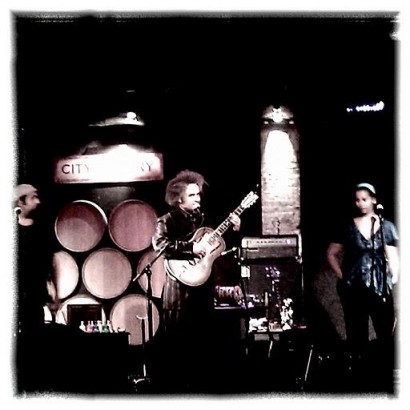 i know i may have mentioned this on a blog during the evelyn evelyn tour, but GET SXIP’S CD (it’s on bandcamp, too!) 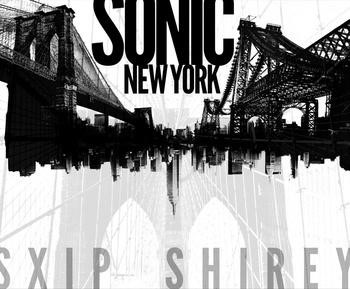 to (hopefully) encourage those of you who’re on the fence: neil, sxip, and myself signed a copy couple copies of it which we’re gonna be giving away.

there are a few ways to try and win one:
* order the album on bandcamp or CD baby, and FWD your receipt to WeLoveSXIP@gmail.com
or
* click HERE to tell your friends on twitter about it (or write your own tweet, which is actually even cooler, as long as you include the tag #WeLoveSXIP)
or
* tell your friends elsewhere (facebook, myspace, your blog, etc) and e-mail WeLoveSXIP@gmail.com with links to your hard work.

and here’s a picture of me and oneiromantics, who brought a ukulele all the way to the gig because i twittered it.
noble and true, you guys are…. 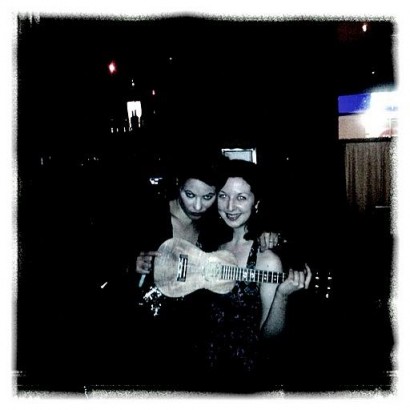 then it thundered and poured huge bucket raindrops all over us on the walk home, and everyone fled the rain, and we stayed in it and we got soaked and i yelled and the city yelled back and kept raining on us, and man i fucking love it there. you can’t see it in this picture, but the rain was just starting to decimate us here: 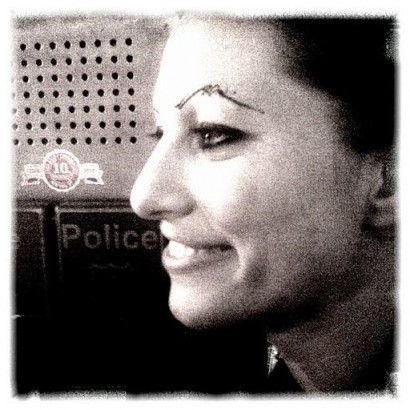 and on the train home to boston i fell in love with a 75 year old man named jeffrey who sat next to me and told me all about his life and love and jujitsu and irish folk music and his dead son.

and when i woke up from my nap he held my hand.

so now i am home, and i am still very happy.

happy the record’s out, happy you guys are here, happy i’m starting work today on a project i’ve fantasized about for fucking years.

whatever is next, i am sew ready.

expect a blog in the next week or so ALL about cabaret….i’ve just heard tell that the shows are ALREADY SELLING out and they haven’t gone on sale to the general public yet, only the subscribers (jesus).

p.s. UkuleleHead: here’s something i just dug up. it’s me & jason playing “fake plastic trees” on ukulele and accordion on the side of a river in moscow.

the site’s ALL in russian, so sorry you can’t read it. if any of you want to translate, hit me in the comments.

note: those wrinkled old russian ladies in the heavy make-up AGREED to be in the video. we weren’t just fucking with them. they were amazing.