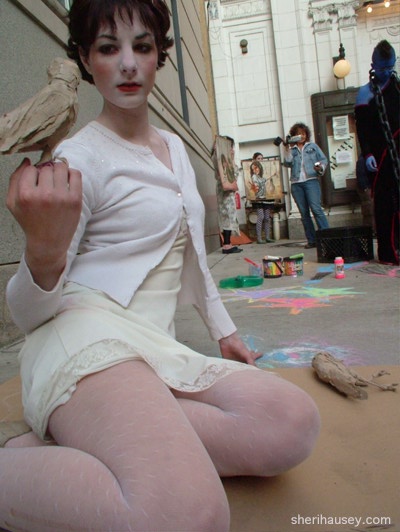 THE RETURN OF THE DRESDEN DOLLS BRIGADE…

so, here we are, exhuming the past and focusing on a bold and bright future for the next iteration of The Glorious Dresden Dolls, and it occured to me: we’re doing two HUGE shows in outdoor venues (and one crazy show in an indoor venue that is a massive old re-purposed theater) and i was like…BRIGADE.

for those of you who missed the height of dresden dolls mayhem in 2003-2007 – the brigade was the name we gave to the rag-tag collection of our friends and fans who came to the shows and provided EXTRA ART AND ENTERTAINMENT. it was…a little of everything. if we had a friend who was a painter, they’d set up an easel in the lobby and just…paint. some people did living statues outside the gigs as people stood in line, or played their stringed instruments or accordions. some people bodypainted other people (we always had to promise the venue that we’d, um, use plastic on the ground). some people would do chalk paintings on the ground. some people with no performing skills would just hand out flowers with little notes to people in line for the show. some of our theater-weirdo friends set up tables with typewriters and sat there silently typing out poems for strangers passing by. some burlesque performers would hop on boxes and just do crazy things. in a word, it was heaven.

i just tried to look up “dresden dolls brigade” on youtube and there’s almost NOTHING…but that honestly makes sense. it was never something you could capture on video. it was the feeling

when we started to tour in bigger and bigger venues, it got REALLY HARD TO ORGANIZE EVERYBODY, and we mostly just let people self-organize….but that was a nightmare with the venues and getting permission to do more complicated things, so we roped in our friend jen gapay, who was a pro party-thrower from NYC, to run around the shows with a clipboard and make sure that the people doing brigade-stuff were able to come in early and set up. often professional street-performers would join us and make a handful of cash, since our fans are always super-supportive.

SO…COME ONE, COME ALL…jen’s email is below and if you’re feeling like pitching an idea for any of these shows, go for it. if you pitch a great idea for the boston and/or coney island shows, we can probably hook you up with a ticket, since the shows aren’t sold out yet. if you already have tickets, great, come and help. there’s a very small allotment of guest list tickets for the brigade and when they’re gone they’re gone!

only email jen if you’ve got a very strong and clear idea of what to do. she’s there to manage traffic, not to help you figure out what to offer (she’s crazy busy). we are still working out with the venues EXACTLY where people can perform and what we can get away with…and some things may need to happen outside the venue (ie on the coney boardwalk itself?) and it’s all a moving target.

so  when emailing jen, INCLUDE PHOTOS AND LINKS, and when it comes to general guidelines….well, here are some examples:

“hi! i’m steve and i’m a sword-swallower/living statue who usually busks in times square. can i show up and stand on a box and stick a hat out and do my thing?”

“hi jen! i’m klaus and i make beautiful paper and silk flowers and would love to festoon the bathrooms of the venue, may i?” (jen will probably have to figure out fire code)

“hi jen! my name is sophie and i’m a painter. can i set up an easel and do portraits of people? is it ok if i ask for tips?” (probably yes, and yes).

“hi jen! i’m nancy. i’m part of a theater-troupe and we’d love to create a giant tableau of body-painted people that re-enacts a painting by manet. there’s 5 of us and it takes about an hour to get ready and we’d love to start when the doors open and be finished around the time the opener goes on. can we do that?”

“hi jen! i’m bob and i just want to sit on a folding chair sobbing in a fetal ball covered with blue roses safety-pinned to my black black clothes and have people deflower me while i sob. i’ll also give each person a home-made fortune cookie with a donald trump quote in it. can i do that?”

“hi jen! i’m stephan and a professional baller dancer. can i come?” (jen will probably write back asking: “what are you planning on doing?”)

“hi jen! my name is sophie and i’m a painter. can i do something?” (jen will probably ignore your email).

“hi jen! i’m part of a burlesque troupe and we’d like to do a number to a nick cave song on stage, it’s about 6 minutes long” (jen will probably write back and tell you that the stage itself is off limits, due to instruments being set up there.)

“hi jen! i just want a free ticket to the gig. what should i do?” (jen will not write back).

….and important to point out: the brigade was always volunteer. it was always thus, and will always be so, as that’s the spirit of the thing. (that being said, if you blow our minds with an idea and need to drive from toronto to do it, we’ve been known to volunteer right back and help pay for your gas..and the fanbase is always super-accomodating with ride-shares and couch-shares….go hit the facebook group if you want to find some direct help.

i hate that i have to say this, but….if you wanna get involved, for fun and pleasure, we’d love to have you.  if you’re wondering if this is us asking people to do shit for free that would otherwise be paid work, no. this is for joy, and happens when people make it happen, and it was always thus. if you don’t understand that…eh, whatever. don’t worry.

AUGUST 24th: Kingston, NY (this show is SUPER SOLD OUT. only brigade here if you’ve already got a ticket and can prove it, cause this shit it NUTS).

more info on the shows: http://amandapalmer.net/shows/

AND….ask questions here or on twitter and i’ll try to answer!!!

CHICAGO NINJA ACTION! ….and FULL DRESDEN DOLLS WEBCAST IS UP!