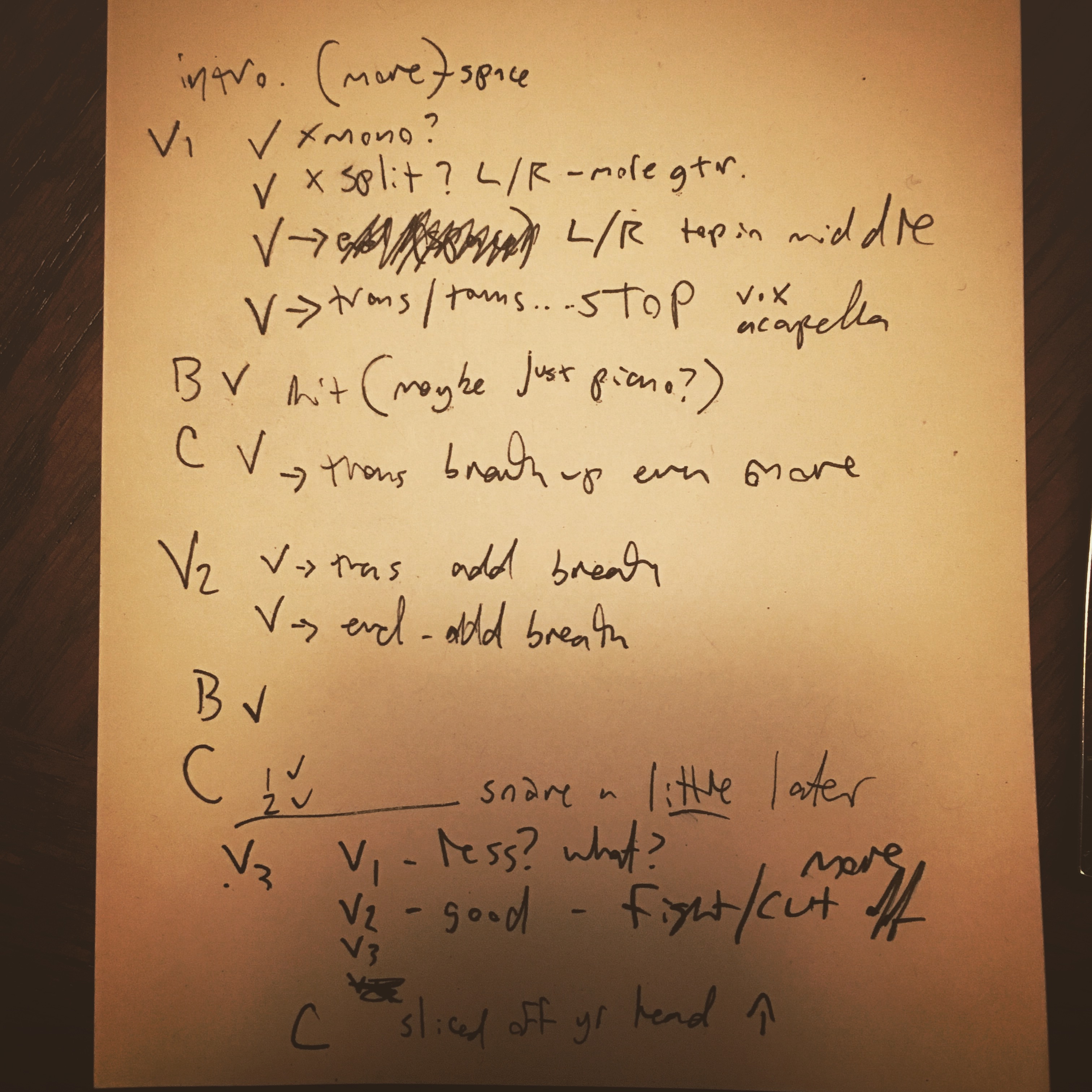 I was just about to press send on this when Neil’s daughter holly called with the news that david bowie died. I’m so rattled by it that I think it needs a post of its own that I can spend some time on. a hero of mine, and a huge hero/influence of neil’s. it’s going to be a hugging night. neil and I were literally on a david-bowie-video-marathon five or six nights ago…re-watching stuff, neil showing me new stuff. maybe we knew.

I just got off the phone about an hour ago with jherek bischoff, who’s put on his mixing hat after doing triple-hat already as bassist, string arranger, and string conductor….

…the mix is sounding incredible. i was explaining the recording process of the song to my dad over the phone tonight – he asked, and speaks my language even more for having been in the studio with me over the summer  – and I told him about how this process is different from what I’m used to. that got me thinking…

it is a very different thing to state that i’m making a song and then just Make It and Thing It. I suppose in a way it isn’t that much different from an artist announcing they’re “in the studio making a record”…but it sort of is. when you do that (and I’ve done that, a handful of times now) you have a degree of cutability, editability…if one song isn’t working you can tend and shape and mold it…if one song REALLY isn’t working, you can cut it.

this song was made with a one-day-only band…me on piano, Jherek on bass, ryan Lerman,  a friend of ben folds’, on guitar and ben on drums. the band would exist for one day for recording purposes only and probably never be in the same room again at the same time. so whatever happened…happened. I emailed everybody a plodding piano demo, with a few notes, but basically all the learning of the song took place that Monday, after we spent from 10am-noon getting sounds in the studio so we could track straight to tape (well, virtual tape). by noon we started learning. we became an instant band. we cut half the first chorus. we changed some chords. I took input from all three guys. I leaned on ben a lot, since I trust his song structure doctoring advice.

at around 3 pm we started playing through the song over and over, and by 5 pm we started doing takes. by 7 pm, we were done. we had about 9 takes of the song. Jherek and I stayed until 10 pm, listening to the takes and putting together the best of he best. that was our day one. I left feeing really satisfied having WORKED, especially having worked while breastfeeding a baby every ninety minutes or so…but I wasn’t positive the song was going to actually sound good. I tried not to care.

it wasn’t until day two at jarons house, after tracking the strings (which, to be fair, sounded incredible) and after tracking the first pass at a vocal, that I started to think it might work. and, again, to clarify: “work” means sound anything like the picture I had in my head. it’s hard to explain to anyone how a song sounds in your head when you write it. this is why you try to work with people who speak your tongue,  your aesthetic, and know what you mean by words like, you know, “slice-y”.

I believe I told Jherek tonight that one transition needed to sound “slice-ier”. what the fuck does that even mean? Jherek knows. Jherek will make it sound sliceier.

back to jaron’s for a moment, to try to explain something,..when I put down the first vocal take, I thought: ok. maybe this song not so bad. maybe good. ok.

then I started layering the vocals, an idea that id gotten overnight while letting the bands tracking resonate and ping-pong around in my head. there’s something to be said for not allowing yourself to think about something for too long. first idea, best idea. and it’s never good to let a first idea sit around too long…it hardens, or rots.

Jaron, the engineer, sat behind his desk in the other room of his house while I gave him directions about layering the vocals and I went in and did take after take, piling. by then Jherek was gone, the strings had gone home, jarons studio assistant was gone, and it was just me and him…and ash and his magically-found babysitter Michelle in the other room.

after I’d layered about 4 vocals, I knew the song was going to work. how did I know that? I dunno.

and i found myself wondering what I’d do with the song, or the recording, rather, if it’d been BAD. I don’t know, to tell you the truth. I wouldn’t put it out. I’d probably treat it like a very expensive demo and experiment, and recorded it again, later, once I’d gotten a better handle on what it needed to be. but I put my faith in the randomness of my one-day band, and I put my faith in the fact that Jherek is a great bassist and ben is a great drummer and bens friend would be a great guitarist and hat they’d all be fast learners and have on-the-fly perfect ideas…and they did. Jump and the net will sound awesome.

the more I work in the studio the more fascinated I become by the process itself – the intuition and lack of second-guessing that comes with having been in a studio lots and lots of times.

I asked neil about this that night when I came home from the studio, because I assumed he’d have some analog in writing.

“you know that thing where you’ve been in a creative situation enough times to know that you should just do an idea when you get it because you aren’t going to get a chance later, and you’ll always be looking at your finished product thinking DAMMIT?”

“you know…when you’re in the middle of a process making changes and you realize that you’ve become enough of an expert in the process to know that you need to do the thing NOW because there isn’t a next round of changes and even though you think some magic person or idea fairy is going to hop down and do it for you YOU ACTUALLY have to stop and do the thing right then and there?”

and he was like: “no. I have no idea what you’re talking about.”

then the next day he was showing me an early draft of some inside this-is-how-awesome-neil-Gaiman-and-how-awesome-this-book-is document from his publisher, and I saw a clonky sentence and I was like: “THIS ! this is the thing! like, if you don’t change this sentence RIGHT now you might be staring at the final edit of the book jacket going ‘but this is a ridiculous sentence why did no-one ever change it’ but then if you thought about it YOU saw it once upon a time and you could have been the person that changed it. you know?”.

a tangent. brought to you by the fact that the baby has been asleep for like an HOUR.

ask for a machete & ye shall receive a machete