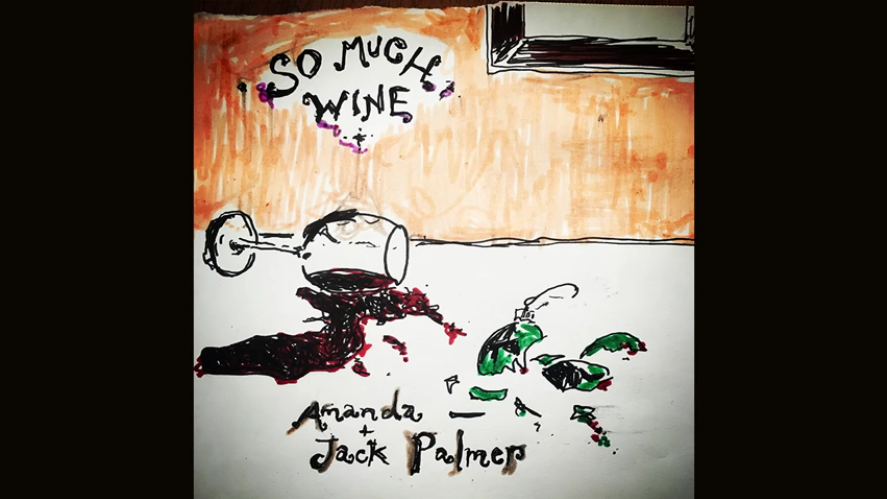 i love you all so much.

a present, from my family to yours….

here’s an attached WAV, for all patrons, and on youtube for zee public.

and here’s the link on bandcamp:

it’s a new recording by me and my dad (i’m on piano, he’s on vocals and guitar and we’re both singing), of a song called “so much wine”, a song which takes place on christmas day. we recorded it over the summer, when i was eight months pregnant.

the artwork is a little drawing i did yesterday, on a torn out journal page with markers stolen (well, borrowed) from a five year old.

it’s one of the saddest christmas songs ever, would you expect any less?

i first heard it being played by jeff tweedy on an acoustic guitar and i fell in love. it’s by the handsome family, and i wrote to the band to ask if they’d mind if i added a last verse. they were enthused…so verses one and two are by them, and verse three is by me.

christmas/holidays/this time of year is a bright, beautiful thing that also illuminates the past, the dark and the underside of the rug, the deep and cluttered closet of life.

this song is about what it’s obviously about, but it’s also about everything.

i know you, and i know that if you’re human, you’re struggling.

may we all be saved from the bottom of the glass.

which, of course, we never will.

at least we have each other.

that sounds like a cliché, but lately, that’s been feeling very true here on the patreon.

you guys help me from feeling alone, if i don’t say that enough. and i hope you know wherever you are, whatever you’re doing, whoever you’re with…

….you’re not alone, either.

we’re a family. a weird family.

but a real one.

p.s. (edit!: EVERYONE can download the song as a WAV. convert to mp3 if you wanna! it’s unmastered but should be at a really decent level for listening. i had originally thought this was getting sent in the email, but i think the file was too massive.)

p.p.s. super thanks to rob stein, the incredible pedal steel player who worked in the studio with us to make this song so beautiful, and to joe for doing a bang-up engineering job. and i guess it goes without saying, my dad, for lending his beautiful singing voice. it took a lot of courage for him to come into the studio with me and i think HE KILLED IT.

p.p.p.s. i’m thingin’ this thing, as agreed upon by the main consensus, BUT i’m going to wait til january as requested by a couple of folks on tight december budgets. i would love you guys to know that your generosity this time round not only pays for the engineers and musicians for this recording…but around this time of year your dollars have found their ways, as bonuses, into the pockets of superkate, eric, alex (who deserves extra-super thanks for heading up this whole 12-day-project and spending two weeks digging through Ye Olde Harddrives!) and bill, my awesome staff who cranked behind the scenes all year to make everything like this happen. they do so much for me and for this community, and are often behind the curtains, working unseen and unthanked. so here’s an official THANKS TO THE TEAM. i love them, and i love all y’all. happy festivus, my friends. here’s to an amazing new year FILLED WITH ALL THE THINGS!!!!!!!!!!!!!!!!!!!!!!!