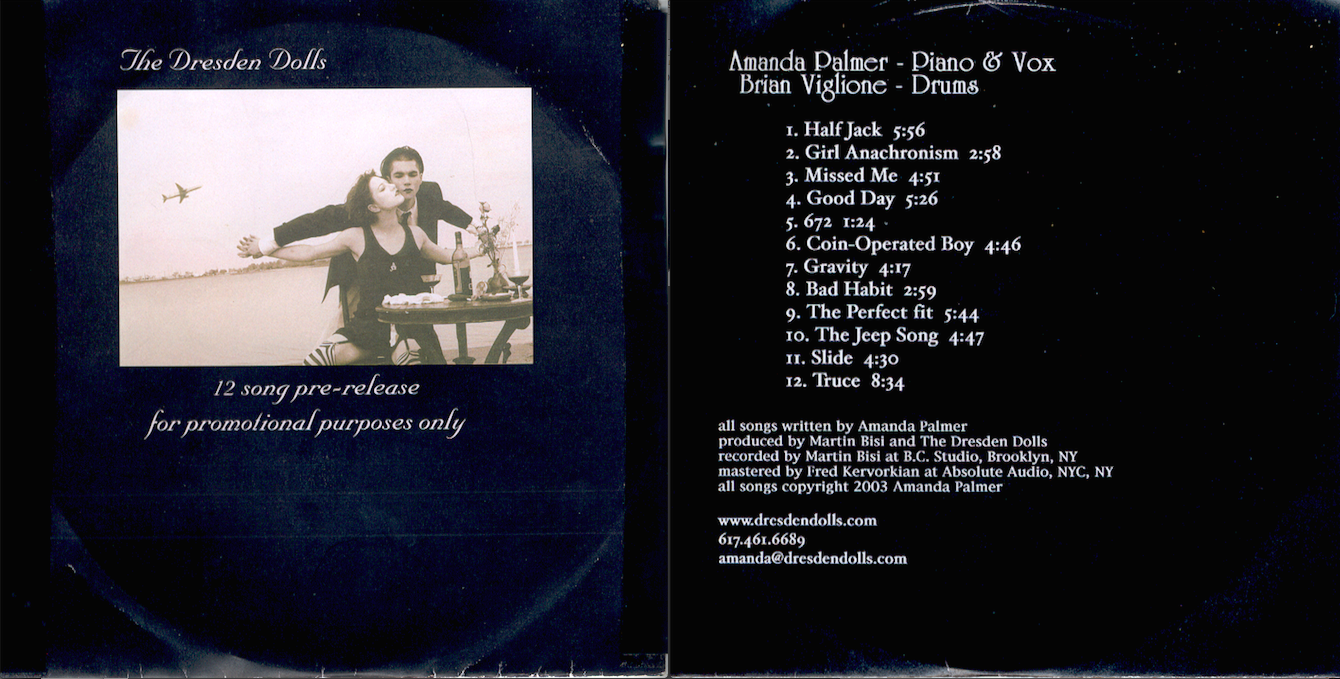 (public post! *patrons getting this as email, you also have a PDF attachment!)

greetings from the coast of california, where the surfers are out wearing festive gear. for real. sand snowmen. iced coffee with spice. but seriously, can we talk about the fact that it’s SEVENTY DEGREES in new york and boston right now? what in hells name is that about? it’s 65 here. that’s backwards. hey new england. we have festivus surfers. so there.

this is one that bill (another part of team AFP) found while sorting through his old shiznit…and i’d completely forgotten about this one.

it’s the original burned CD-proof of the first dresden dolls album (yes, the ONE, with coin-opertaed boy, missed me, etc).

as you can see, if you know the album, the song order is really different. this CD was being burned and the artwork color-xeroxed and sent to labels (we weren’t signed to roadrunner yet) in the few weeks (/days?) between making the record and finally taking it to the mastering studio and the printing press ourselves.

i think we made a wise choice ultimately, putting “half jack” further into the record instead of leading with it. but who knows. things coulda been different.

note #2: same with the email. but that was my email foreverrrrr.

note #3: note the track time of truce. 834, the lucky number of the legendary pink dots. there was, therefore, a long space of silence at the end.

coming up with this image and alternate song-order inspired me to have alex (whose been safely flown back to the UK and is now working from home instead of in the AFP offices) scan and share a few relevent pages from “the dresden dolls companion”, the book of sketches, art, stories and lyrics that i put out in the year after the album came out.

you can still find copies of the book itself on ebay and amazon but it’s been out of print for a while, and i thought it’d be nice to PDF you guys some ephemeral knowledge….maybe at some point we’ll scan and upload the entire book as a downloadable PDF for pay-what-you-want….the stories and the images in it are wonderful.  i thought you’d like that.

and happy festivus, wherever you are and whatever you’re doing and whoever you’re with.

attached to email for all patron levels: dollscompaniongift.PDF