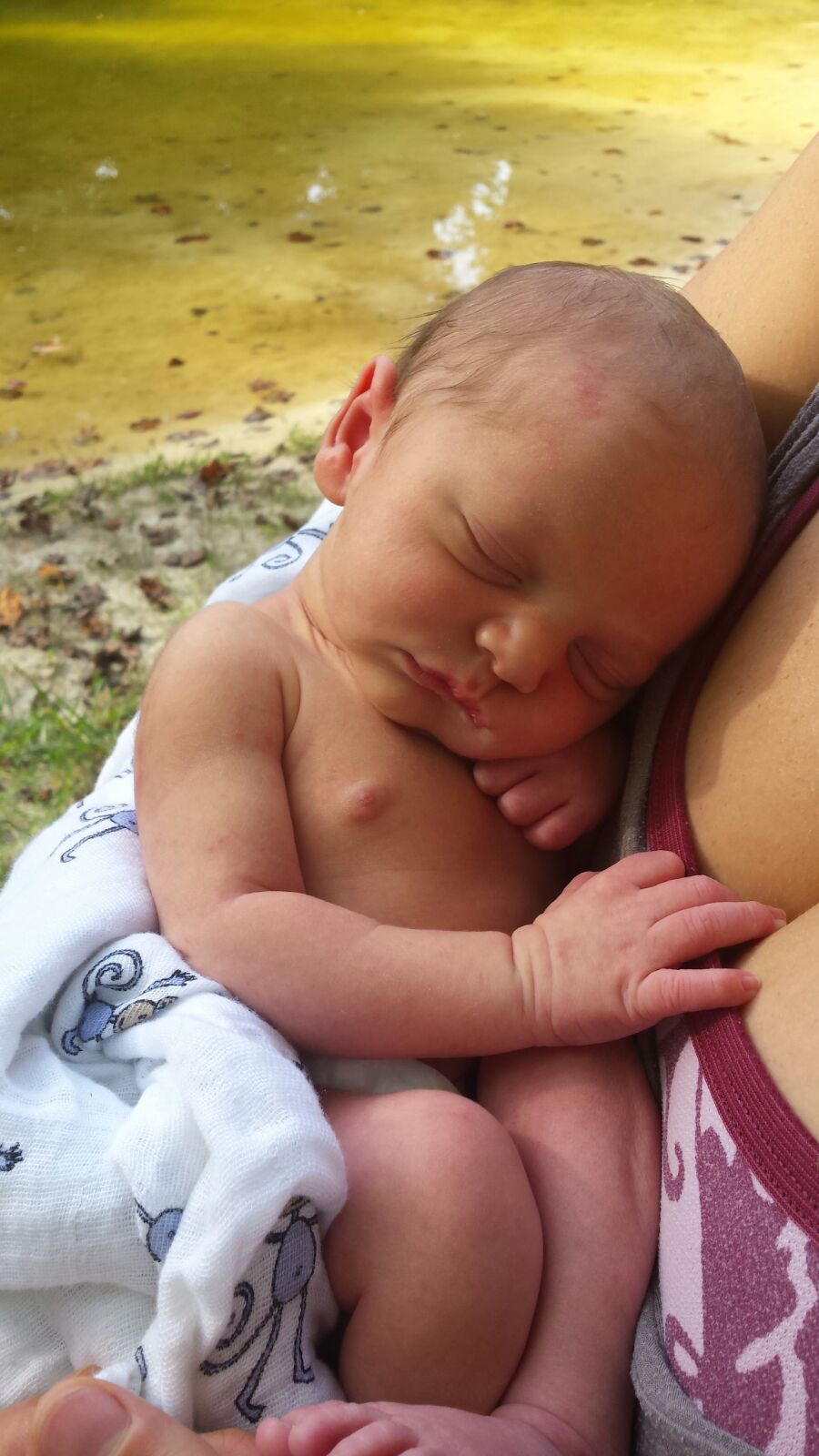 i’m not sure i can ever attack the job of putting the experience into words, but i know one thing for sure: if i could do it, i surely couldn’t do it now. i did take some brief written notes on my epic 24-hour home birth, because they say you forget fast, which makes sense given evolution…the ol’ “oh it wasn’t so bad” mind-trick must come in handy for multiple pregnancies. and…yes….my brain and energy have been about as obliterated as they warned me. i admit freely, my choice to breed has resulted in the inevitable: no time for pretty much anything except a rotating circus of breastfeeding, diapers, washing the diapers, breastfeeding, occasionally feeding myself, peeing, and not thinking about anything but Him.

that being said…it just is what it is, and last night i walked all nine pounds of him down to the water, and we sat in the sand, both naked, and looked at the stars, and listened to the crushing waves, in the dark, so dark that i could only just make out his tiny face; his body so small that i can hold him, practically, in one hand.

i will never forget these surreal moments of my life. i know how fleeting.

i feel like i’m caught in someone else’s beautiful dream, that’s how little sense it all makes.

i love him so much.

how could it be any other way?

in strange news, he seems to have anthony senoir’s hair, neil’s mouth, and my eyes. this picture of him is when he’s about 5 days old, his first trip to the swimming hole in tennessee about a mile from where he was born. he’s in the arms of whitney, one of my best friends and doula, who was indispensable during my labor and the days surrounding it. her boobs, usually a source of unmitigated joy to us all, were a source of immense frustration to him (WHY DO NOT THESE MAGNIFICENT BOOBS WORK??). don’t worry, whit. we know your magnificent boobs are magnificent.

four nights ago, while i was feeding him in the midle of the night, some lyrics to a song i started over a year ago came to mind. i forced myself to get up and record them. without a baby, i might’ve been lazy. but now i feel like i have some sort of point to prove. so maybe….who knows. certainly, my creative brain hasn’t gone down the drain with the diaper water. thank christ.

forgive me, as i know you will, my gradual return.

a few important housekeeping things, before i fall back down the baby-hole.

1. i’m going to write a much longer blog about this, but i’ve been spending the last three weeks deeply pondering the questions of babies, privacy, reflection and social media. there’s so much to think about and so much to say, but for now i’m enjoying the fact that the young man is not getting a ton of internet airtime, nor am i sharing much of this chapter of my insane inner life with the social media channels. it’ll come later. i’m too busy living it right now to be reflecting on it. i’ve gone through phases like this while on tour or in relationships. sometimes the passion of life is happening at too great a volume to be simultaneously regurgitated. it simply feels right this way, right now. so if you were out there on twitter and facebook, wondering….thats why.

2. THING-wise….i may try to release a song/video i’ve been keeping in my back pocket this month. not positive we’ll make it happen, but well try. it’s a cover, and it’s beautiful.

3. ok. how fucking awesome is bernie sanders. i’ve been supporting him for several months and i thought he killed it in the debate last night. i am serioulsy considering doing some kind of breastfeeing/piano telethon to support him if he gets the nomination. i am feeling the bern so hard. just saying. even with this baby on my tit, i am going to do everything i can to support his campaign everywhere we travel this winter. just a heads up. i know you may not all love him, and if it’s going to drive you CRAZY i’ll keep my political enthusiams to a minimum here…but oh my god, do we need someone like him in office, especially given the looming climate crisis. i will not delve into a corny speech about how i want my son to have a habitable planet to live on. i want EVERY FUCKING BODY to have a habitable planet to live on. anyway.

4. THE PAPERBACK of “the art of asking” is coming out on october 20th – right around the corner!!! if you go to the site, there’s a new landing page: http://amandapalmer.net …WHAT DO WE THINK? gimme feedback.

i am PRAYING that the book gets back into the new york times charts, and the only way it will happen is if you buy the paperback THE WEEK IT COMES OUT…so expect me to come a-pokin’ you in a week.

5. !!QUESTION!!: i have ONE SINGLE GIG this fall, and it’s on october 24th at the boston book festival (to celebrate the release of the paperback: http://www.bostonbookfest.org/att..). it’s SOLD OUT, but i hope some of you already snagged tickets. it will be a 70 minute show with neil interviewing me about whatever he feels like, and then maria popova interviewing the two of us about life, then questions and a little ukulele). neil’s never officially interviewed me before, so beware. also, we may have a certain baby with us.

we looked into the cost of streaming it prohibitively expensive since there’s not reliable internet at the venue (a church on boylston street).

we could however, ditch that idea and just film and upload the show within a week or so.

the question is…do you guys want to patreon-thing it so we can afford decent production? hands up. i’m easy. given it’s the only time neil and i will be on-stage post-baby for a while, it feels like it’d be nice to film it, but only if the consensus weighs in with a yes. so weigh in.

6. $10+ backers…you probably figured out that my cancelling the last webcast had to do with GOING INTO LABOR. as tempting as it was to webcast my birth…yeah. we didn’t do that. watch for a post just for you guys, i’d like to reschedule for next week.

7. i am so grateful to all of you. for everything. thank you for bearing with me and catching me while i go through this. it’s as thrilling and scary and strange and weird and beautiful as many of you warned me. you were right.

i now have to go buy diapers. i am not kidding. i do. we’re totally out.

VANCOUVER – I’m gonna do it.

to aid and inspire you during the post-holiday crash…