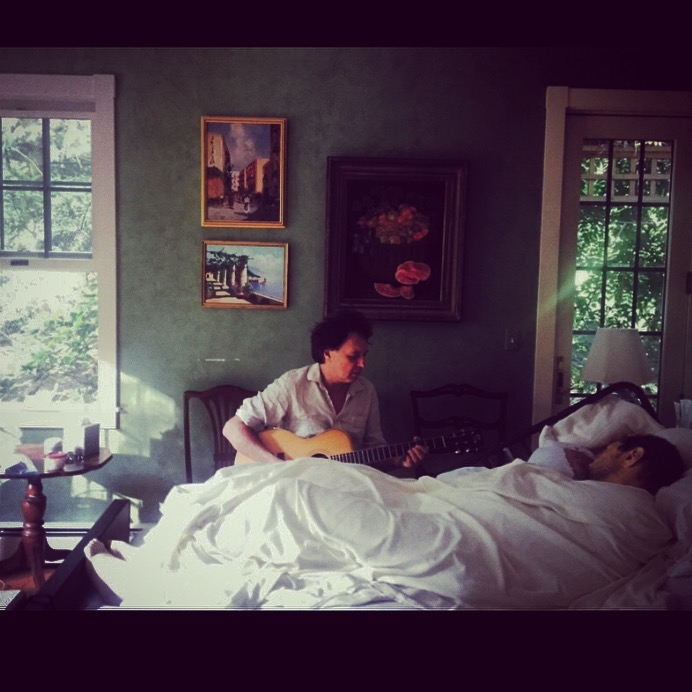 the day after the longest day of the year.

he never took his watch off.

yesterday was hard. we took him home from the hospital on sunday and set up a hospital bed in the living room, and there we’ve been ever since. neil and i camped out at my folks’ dear old house next door, and there was little to do but wait; he was fading.

yesterday afternoon he stopped communicating and slipped into a state of heavy, labored breathing as his small group of friend and family did what humans do in times like that…..eat, mostly. i’ve never seen so many people discuss food and cooking so intensely. it seems, at times of death and dying, we can connect with our loved ones by talking about the basics: how we feed ourselves, what to put in the salad dressing.

his sense of humor stuck until the end. when the night nurse came on sunday night, she asked him if he knew where he was. “my living room”, he mumbled.

“and can you tell me what your name is?”

the whole room cracked up. the poor night nurse probably thought we were all insane. but that’s him. wise guy.

the day went by slowly yesterday….we took turns sitting at his side, making him comfortable, massaging his head and feet, telling him that we were all here, that it was okay to leave. his breathing was hard to listen to, increasingly pained and underwater. we know, as mammals, when death is at the doorstep. knock knock. who’s there.

it was four years ago that they said he had six months to live.

that’s what i keep telling myself. not that he was taken early, but that we got three and a half years of extra goodbye. he was in pain for so much of it, but we got to let go slowly. to hold and to hug and to overdose on friendship and love during a threaded-together set of last hoorahs between hospital stays.

i got to take care of him, the way he always took care of me. he never never demanded. it all just went without saying.

at some point in the evening i got paranoid and couldn’t feel the baby kicking, and, in my morbid way, told neil that i was worried that the baby had probably died because wouldn’t that be just fantastic timing. neil goolgled and found a trick for getting the baby to kick: drink something incredible sweet and cold. so while i lolled on the couch next to my dying friend, neil broughr me an iced mango drink, and i held my belly, waiting. and finally, a flutter. just barely, but there.

i read my twitter feed, my patreon comments, the facebook page. so many stories of love and loss and cancer and such a beautiful sea of humanity sharing the mortal moments. i felt so comforted by all of it, especially the stories from parents who told me they’d welcomed a baby into the world just as a mother, or a father, or an aunt was leaving. the swinging door of life and death. near misses. close calls. someone wrote a story about getting married at their mothers’ hospital deathbed, just in time. these are the things we do.

dinner was thrown together at around eight or nine o’clock, nicolas got the wise idea to gather everybody in a circle.

we sat in chairs and couches around his hospital bed in a sort of makeshift prayer circle, and we just held the space and cried and told him how much we all loved him. i told him i wished that he could meet this kid that’s inside me. i told him that he wasn’t ever going to leave my mind or heart, and that i’d keep him there and pass it all along…everything he ever taught me about love, everything he taught me about compassion, everything he taught me…i’d do my best to give it and teach it to this new little life growing inside of me.

he’d requested the ukulele at the hospital, before he stopped being able to articulate….but i hadn’t played it yet, and neil whispered a song idea, so i went out to the car and grabbed it.

it was just dusk, and a woman in jogging gear walked past. the street i grew up on is tiny and abandoned, there’s almost never a passerby. i looked at her, with her earbuds in and her water-bottle waistband, and thought how alien it all seemed, to be out here on the lawn, with the huge group of crying people and a dying man just on the other side of the wall. the jogging woman would never know.

uke in hand, i rejoined the circle played a quiet, sloppy “i will follow you into the dark” which i mostly couldn’t sing because i was crying. everybody joined me in repeating the last line. and then….we followed him into the dark.

or as close as we could get.

after dinner, we all stayed near his bed, and his breathing changed.

we embraced him from all sides, and minutes passed, and he took his last breath, and was gone.

i had my forehead on his chest, with neil’s hands around the baby, holding me from behind.

then we just sat there. for a while, we just felt his gone-ness.

we started talking slowly, and cracking jokes, which is he would have wanted, and i sat on the couch squished between neil and ron, with nivi sitting on the other side.

i held neil close and told him i loved him.

i put my hands on my belly. a little storm erupted.

…and you’ve never seen a flurry of human hands all go so quickly to one place – like gravity itself was pulling them in. ron’s hand, nivi’s hand, neil’s hand, all looking for a sign of life.

kick. kick. not ready to come out and meet us, but getting there.

“if he needed a new place to go”, i said to nivi, “we couldn’t have made it much easier. it was a super short walk.”

nivi’s really practical, and nodded. “totally. transfer.” she said, pointing from anthony’s body to the baby.

laura decided to leave him be for the night, in peace. we hugged, and cried, and ate ice cream, and one by one, crept off to our beds. i felt the strangest kind of weight and lightness at the same time. i felt spooked by everything, every flickering shadow, every sound in the house. i sat in the toilet and stared at the wall, thinking how strange it was that he was gone. really gone. never to come back. i didn’t even want to brush my teeth alone. i stuck to neil like a barnacle.

as i turned the light out, i mostly couldn’t stop thinking of laura, walking up the stairs to the too-big bed, past his closet, where his shirts are hanging and his shoes are on the floor.

his shirts and shoes. i fell asleep in a daze.

at 6:30, the birds chirped me awake, and the first thing that came into my head was to grab neil and ask him not to leave me.

i found a good stick in the yard. i’ll use it, when the time comes. if you haven’t read the book…that won’t make any sense.

i crept into the living room and anthony was still there, looking peaceful and so, so motionless in the hazy dawn light. it had rained. i kept expecting to see his chest rise, his feet to shift, his head to raise and wink at me and say “just kidding…!”

i pulled up a meditation cushion and sat there for a while, breathing it all in and out, thinking about how the buddhist monks will sit with their departed friends for days, days, days after they die, contemplating their own mortality…when nicolas came tiptoe-ing into the room with his guitar. he played two songs of his own that he knew anthony loved, and my face overflowed again. nicolas lost his wife, about ten years ago, to the same disease that took my older brother karl, when i was 20. lou gehrig’s disease, ALS. he’d been through all this. she was a dancer. christine.

then i offered up a prayer, out loud.

“may all the wonderfulness and compassion that is in anthony enter this child in my womb. and may all the things that made him an impossible bastard stay behind…you know…if possible.”

we sat there and meditated for a while, then stretched our backs. the sun blazed through the windows. it was like we had stolen our own private little wake.

“when christine died,” he said, “we left her body out for two days, so everybody could come by and be with her.”

“i’m so glad we got out of the hospital,” i said. “there’s no time to say goodbye like this, there’s no space for it.”

we’d been talking about that the night before…how screwed up the new systems are, how we’re all so far from death and life and birth all the time because we no longer live in tribes and villages and close quarters. it used to be that there was always someone around dying, and someone around being born, and it rolled out right in front of your eyes, this great cycle of life, instead of being hidden in locked, poorly-lit buildings with visiting hours.

we sat a little longer, looking at our departed friend.

i felt a flutter and reached for nicholas’ hand and closed my eyes.

he smiled and put his hand on my belly

out with the old year, into the new…

the fastest longest slowest blog in the west