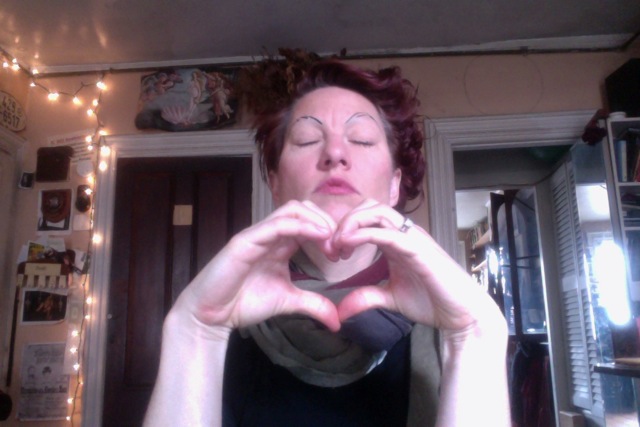 i promised you an extra story in the last blog (which was a chaotic joy explosion, thanks to all of you who shared it).

this story from TED was too…i dunno, off-topic, and just too beautiful on it’s own to plop into the storm of all that ninja-ing.

on the closing day of TED, gabby giffords and her husband, mark kelly, took the stage for an interview.

here, from the TED blog:
“In January 2011, US Rep. Gabrielle Giffords was shot in the head in an attack on her entourage at a constituent meeting near Tucson. Six people died and thirteen others were injured. She survived, and her recovery has been a remarkable story. At TED2014 she took the stage with her husband, astronaut Mark Kelly, for a Q&A with the head of the Paley Center for Media, Pat Mitchell. Giffords suffered from aphasia as part of her injury, and speaking is still difficult, so her answers were short, and much of the speaking was done by Kelly.”

the wikipedia entry on that event is actually incredibly thorough, if you’re not familiar with it.

the beginning of the interview…it was so, so moving. i cannot tell you. 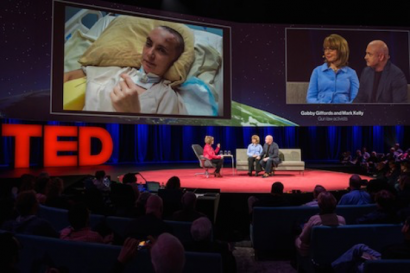 after gabby was shot, mark left his high-level astronaut job to care for her.

her aphasia means she can think totally straight, but words are slow and hard coming out, and don’t always come out perfectly. mark helps speaks for, and with her, like her thoughts to the word are a collaboration between the two of them.

gabby has since demanded he take his astronaut job back, and mark told the story of how he was in the outer reaches of the atmosphere at the same moment she was getting a new brain surgery. they talked (or did i just infer it?) about how difficult it was for gabby to go from being a high-powered woman to relying – in some complicated ways – on her husband. (no…that doesn’t hit close to home at ALL. and i thought OUR relationship was complicated. HOLY FUCK.)

this is the sort of marriage where i’m just gobsmacked at the depth of challenge, and love, and intensity, and also wonder what the mundane, minute, little day-to-day struggle is really like…behind the “inspiring” face of a public couple where everybody oohs and ahhhs…where life just bears down on you and you re-sort your priorities…because you must.

i was sitting there with neil, holding his hand.
if something like this doesn’t cut you down to size, what could?

pat mitchell would ask: so how are you feeling? and mark would always give gabby the chance to answer first, if she could find the words. sometimes she would just let him deal with conveying what he knew she would probably say. but mostly gaby would answer, and her answers were short, economical condensed phrases or words, to summarize the whole thought happening up there.

so how are you feeling?

the slide came up of gabby’s service dog, and she said:

and mark picked up for her and explained their beautiful relationship, and the love they had for this dog.

pat asked about their first date and the answer was hilarious: they met in a prison.

gabby had to go there for her political duties and so mark-the-astronaut tagged along.
(that’s probably when she knew he was a keeper. hey! we’re both super busy but i have to hit death row tomorrow! i’m DOWN LIKE JAMES BROWN, baby.)

…or the incredible point where pat would ask what gabby was up to and she said:

because…
the fucking woman is learning THE FRENCH HORN. AND SPANISH.

this was the one that destroyed me:

pat asked WHAT, after all the drama and the shooting and the hospitals and on on on, WHAT was the biggest thing gabby had learned/discovered…?

then she looked over at mark, squeezed his hand, nodded, and then she said:

i wept into neil’s chest.

i saw anthony a couple days ago. he drove in for a quick-hit visit.
he’s over a year in remission now.

i told him this story.

“it was like” i said “…it was like she summed up all of what’s important in humanity in just two words. well, four words, but you know. she didn’t say any more. she didn’t need to. in fact, more might have ruined it.”

and he thought about that.

“yes”, he said. “pelé-the-soccer-player. when he retired, he stood there in front of a massive stadium of people. and he was so beloved…” and anthony went on to list the accomplishments and beautiful graciousness and talents and humility of pelé-the-soccer-player, how he could do flips and kick a ball into a goal, and how everybody loved him so much, how he was the paragon of athletes.

“…and the crowd,” said anthony “…gave him an interminable standing ovation. it lasted forever. and then he stood up to the microphone and said:

and the crowd went apeshit…

…and the crowd went apeshit…

…and the crowd went apeshit.”

“hm.” i said. “if that’s a true story, then maybe pelé wins because he got it whats important in all of humanity down to one word. but maybe actually no. maybe he loses because he said it three times.”

“i dunno,” said anthony “i think the emphasis wasn’t a bad idea.” 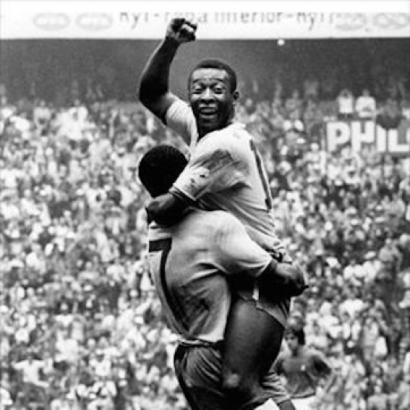 btw, before i go, if you’re in the boston area, anthony & a bunch of writers are doing a show/reading TOMORROW (saturday march 29th) in maynard, MA. you can grab tickets HERE. if you can go, go, you’ll be glad you did.

p.s. i’m hunkered down, back in the states, working on The Book, The Book, and nothing but The Book for the next few weeks. follow the twitter feed, i’m currently everyone there as world-wide-human thesaurus. i’ll be in boston around the middle of the month doing something in relation to the first-year anniversary/memorial of the boston marathon bombings.
will blog and tweet. stay gold, my friends. 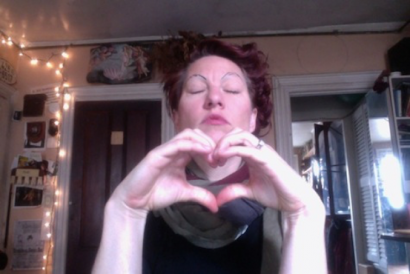 a beautiful tribute to anthony, from jamy.