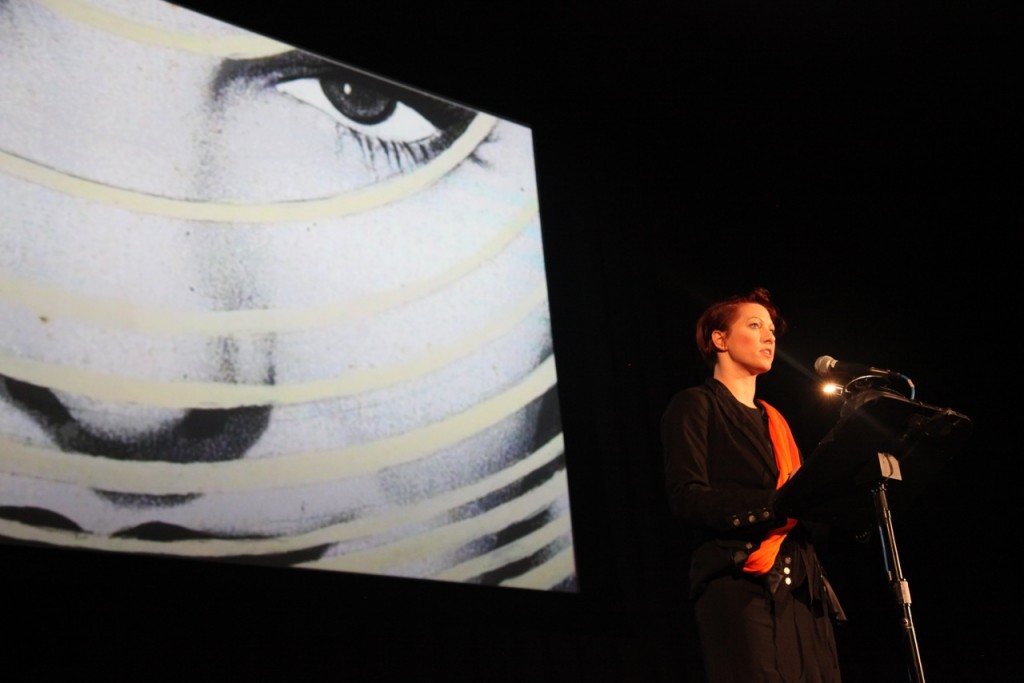 i wanted to share this clip with you and encourage you to delve further and watch the entire performance.
i’d watch it in a quiet space, it’s pretty dark. and powerful.

the background story:
about two months ago, i was invited to travel to the united nations – which is a giant-ass building in new york city overlooking the east river.
it was about 18 degrees that day. (let’s not get crazy about the importance and history of the united nations, but suffice it to say i felt sufficiently humbled thinking about the amount of decisions that have been made in those halls. mostly decisions made – let’s just call it – by men.) 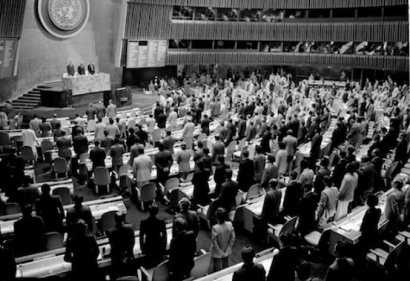 one: the division of the united nations called UN women came into existence, as did the concept of a
UNITED NATIONS DAY TO END VIOLENCE AGAINST WOMEN,
which was why i was invited there on november 25th.

two: the united nations has hired the equivalent of an Artistic Director, whose job it is to bring the performing arts into the UN building. i think that’s incredible in itself: they’ve been showing films and creating performances IN THE HALLS of the UN, which are attended by the ambassadors, their families, and the huge community of people who work in that crazy building – whose stated purpose is promote international cooperation and (hopefully) ensure that we don’t wind up in world war III anytime soon. hooray for art.

where politics and art intersect, incredible insights can and do happen. i think art can teach things that speeches and graphs cannot, and so i think it is awesome that the UN created this opportunity.

for the end-violence-against-women day, the UN brought in a celebrated italian playwright named serena dandini to present a set of monologues she’d written called “ferite a morte” (translating to “wounded to death”)… 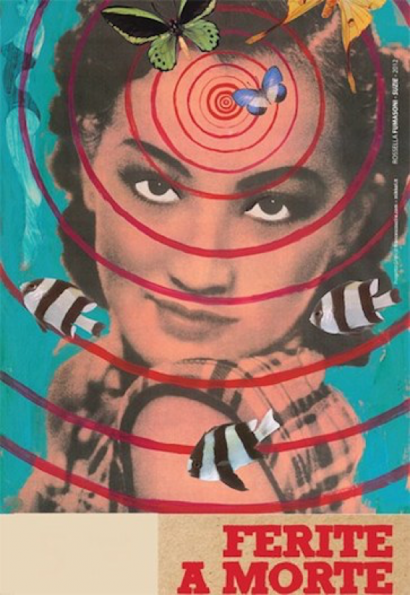 …it’s a sort of spoon-river-anthology style set of intimate confessions, reflections and recounts from women speaking from beyond the grave…all of whom had died at the hands of violence (sometimes domestic, sometimes random, always unnecessary). it’s not a walk in the park, this piece. it’s dark as fuck.

serena invited 16 women to read the monologues to the assembled crowd, which included a lot of the ambassadors to the UN. the house was packed.
i didn’t know which to be more impressed by: the UN ambassadors in the audience or the powerhouse women i was reading alongside.
here they are (with twitter name, if applicable)

the first thing i did was take a picture in the main UN hall, because, ukulele in the united nations. 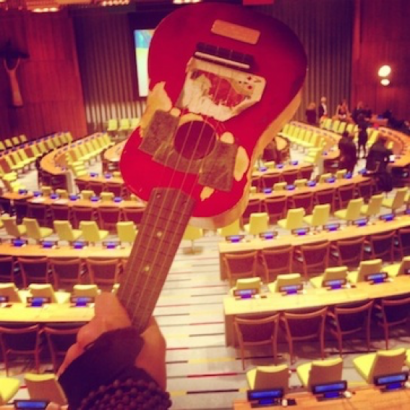 there was a press conference in which serena, sebastiano cardi (the italian ambassador to the UN), and lakshmi puri (the deputy executive director of UN women) talked to the press corps about the day, and about the statistics of violence against women (sobering). 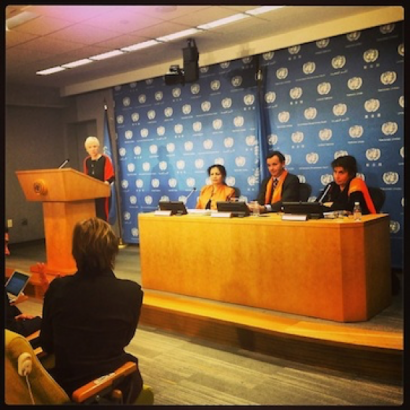 …for instance, some of what was shared:
• 1 in 3 women worldwide experiences some form of physical violence inflicted against her in her lifetime.
• women aged 15-44 are more at risk from rape and domestic violence than from cancer, motor accidents, war, and malaria. (according to World Bank data)
• it is estimated that 1 in 5 women will become a victim of rape or attempted rape in her lifetime. (worldwide)
• young women are particularly vulnerable to coerced sex, and are increasingly being infected with HIV/AIDS. over HALF of new HIV infections worldwide are occurring among young people between the ages of 15 and 24, and more than 60% of HIV-positive youth in this age bracket are female.
• in many societies, women suspected of engaging in premarital sex (including rape victims and women accused of adultery) have been murdered by their relatives; the violation of a woman’s chastity is viewed as an affront to the family’s honour. The United Nations Population Fund (UNFPA) estimates the annual worldwide number of these “honour killing” victims may be as high as 5,000 women.
(there are many, many more facts and numbers and heartbreaking figures. you can read more and see additional sources, here.)

then all the women got together, and we rehearsed the monologues backstage for a few hours, but not before we went around in a circle and introduced ourselves. my god, the power in that room…. 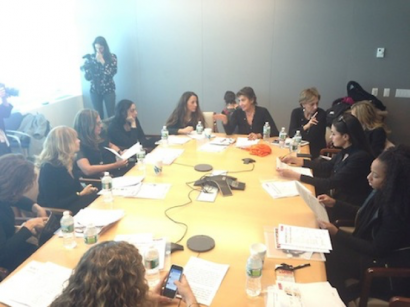 ….i sat next to monique coleman (far right), who became known for “high school musical”…which i’d never seen but i have enough cultural IQ to know it was a big deal. she and i talked a lot about performing, sexism in the industry, learning from shit, and life in general. the woman was incredible. 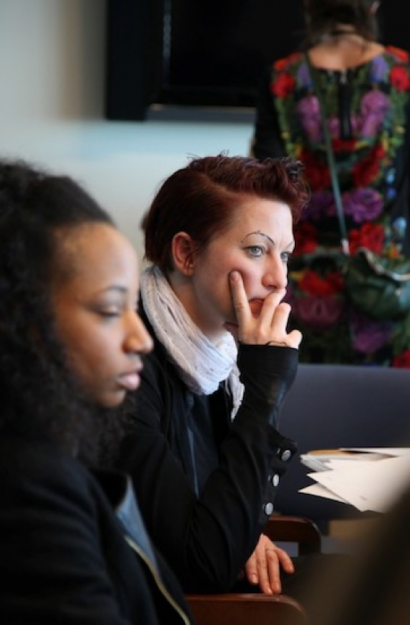 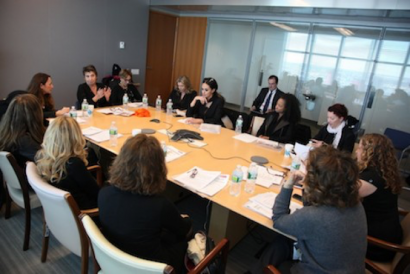 nadja said, another actress, came over and joined the conversation. there was a lot of interesting talk about sexism and agism in the film/TV/theater world.

serene is at the head of the table, and to her right is rosy canale. she introduced herself to the group towards the end, and told us all the story about how the italian mafia had beaten her, almost to death, because she refused to turn a blind eye to their drug-selling in her nightclub. they kicked and pistol-whipped her. they left her for dead, thinking they’d finished the job, but she made it out, a bloody mess. 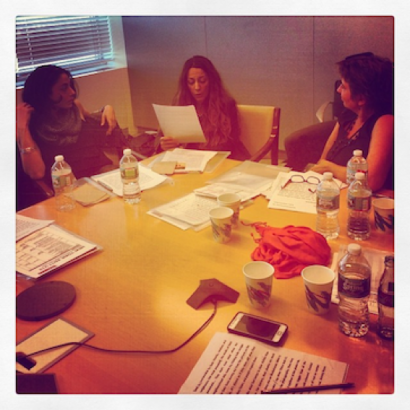 here‘s a piece from the guardian about it.
she’s currently living in america because if she returns to italy, she’ll probably be killed for speaking out.

as she told her story, monique leaned over and showed me her arm, which was covered with goosebumps.

she finished by looking at all of us and saying “i have new teeth. and new legs. and a new soul.”

i grabbed monique’s hand under the table. i don’t think there was a dry eye in that room.

we went to the united nations bathroom and turned it into a dressing room. there was a fantastic discussion about make-up and fashion and The Cage of It. the irony that speaking such giant truths involved prettifying. what’s the way out? who knows. we’ll work on it. 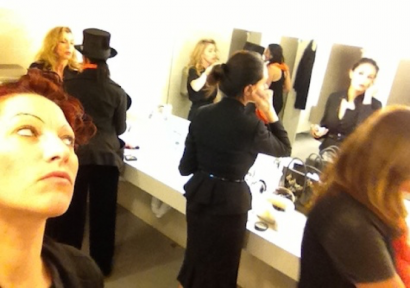 she in the top hat is nona hendryx (yes, related to that other hendrix musician), and she was one of my favorites.
nona is an out lesbian (has been since day one) and was one third of LaBelle (they were famously known for the song “lady marmalade”).
here we is together. i want to be her when i’m 69. 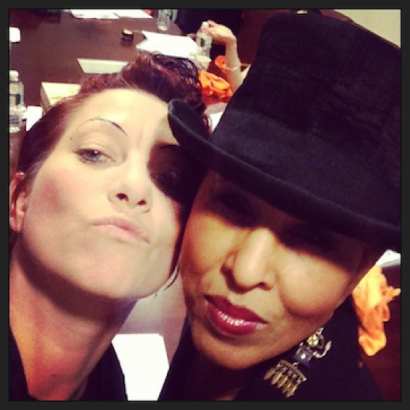 the full performance of “wounded to death”, with all 16 women reading, was streamed live from the UN…
the mood was somber, and as you can see from the list of speakers, it was a mix of performers and non-performers.
here we all were after the final reading (photo by Neige De Benedetti): 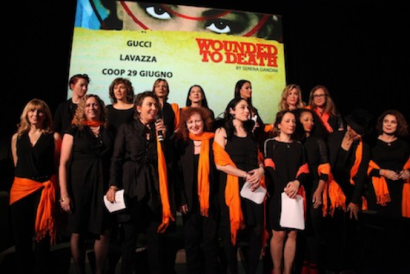 my reading was the only one that wasn’t from the perspective of a single woman – it was a little more esoteric than the others.
i was proud that serene trusted me to read it.
i tried not to perform.
i tried just to speak. 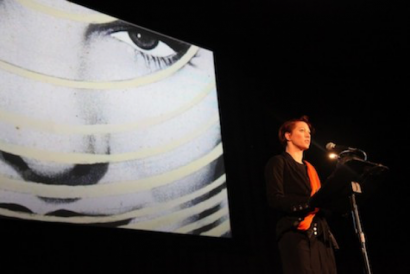 it was a surreal experience, empowering, huge…
…and at the same time, i felt so incredibly small in the face of what we were trying to talk about, to fix. it felt like balancing at the tip of en evil iceberg.

and the entire performance, living on the UN website, is HERE, and lasts about an hour and 40 minutes.

the text from my piece is below.

THE WASTELAND
“My window was small and had bars. From my cell I could see a sliver of sky, a sky from the South or the North of the world, it makes no difference. If you end up in the wrong prison, nobody can help you because it’s your word against a policeman’s, and your word counts for as much as a crumpled piece of paper.

Try to guess: was I locked up in India, America, or South Africa? Maybe I was a Bosnian girl under the falling bombs, or a woman living alone in Rwanda during the war, or in some dangerous square in Egypt. Or perhaps I was an African-American girl in Cleveland, and he was a good cop from Ohio. Or else I could have been a student in Genoa at Bolzaneto, or a Nigerian refugee locked up in an immigrant detention centre. It makes no difference. No one would have taken my word over his, anyway.

Men you beat up to death; women you rape ﬁrst and then you let them die. It’s the way things have been since the dawn of time and these stories no longer make the news. Cases are difficult to bring to trial, witnesses don’t show up to testify. Going against the established order is not worth the trouble. There will always be a defense lawyer claiming it was consensual, then something went awry, and it ended badly. Though it didn’t seem that way for the man involved, of course. Men in uniforms get away with things all over the world, you can be sure of that. They are men of the law, here to serve and protect. You wouldn’t want to insult the nation and question their authority with your accusations. Gang rapes, war rapes, abuses inside army barracks, behind closed doors. It’s nothing personal. You’re part of the spoils of war, a victim of military order, a sheep that strayed from the flock, and then just someone’s whim for the night. The law of the jungle is protected by the establishment: only the strong survive. They get immunity, while you amount to nothing. You have no say. You’re just a number in a statistics chart no one cares about.

Now there are so many of us that we need a heaven of our own, where no man can threaten us with his badge or gun ever again. The battle is over.

Now, at last, I am transparent like the air. I can sleep in my bed of clouds, feeling light, intangible, freed from that woman’s body everyone wanted to own – it was too beautiful to be real, and too easy to devour.”

p.s. more soon. bryony kimmings and i (and a handful of others) are still working on our new-wave (no-wave?) feminist manifesto from our night at The Other Club. now it seems like we’ve got to get this shit just right, or else. look, if you had one shot, or one opportunity…to seize everything you ever wanted…one moment…would you capture it? or just let it slip?
yo.
word.
adjective.
adverb.
where my gerunds at?

a video by neil, music by me. content…maybe not what you expected.