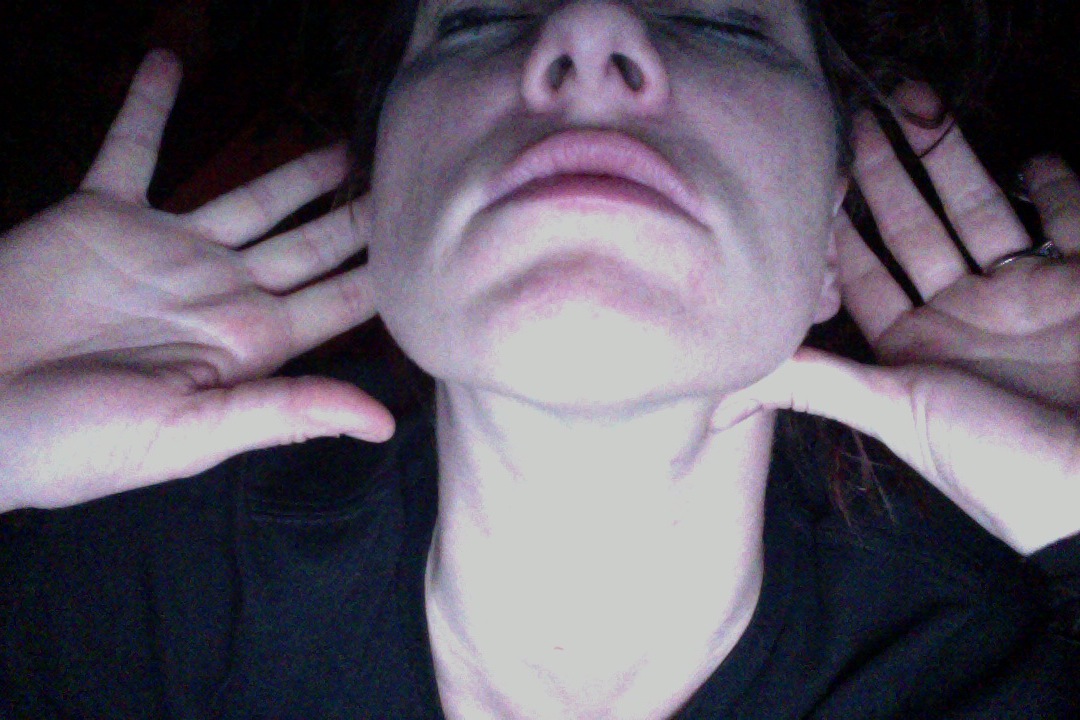 first some quick news, then the dumping of my soul.

it came together fast as a slippery lady fish….i’m going to be appearing at a benefit to SAVE THE MERMAID PARADE of coney island.
may 25, bowery ballroom, NYC.
hurricane sandy was an absolute bitch and has threatened to shut the parade down. i have so many burlesque/performer friends who have taken part in this community tradition for so long, i felt called.
there’s going to be A LOT of special guests and i have the feeling this night will be an unparalleled THROWDOWN. come DRESSED in appropriate mermaid or merman (or just plain fucking nautical?) attire.
i’ll try to learn a special song or two

if you’re not in NYC, you can go straight to the kickstarter: 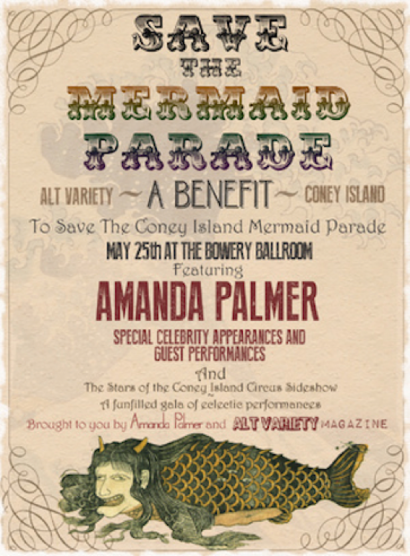 how could you not want these people to exist?

i spent the last few days in philly and new york doing weird shit and falling totally behind.

neil released a book of his University of the Arts commencement speech, it’s called “MAKE GOOD ART”
and i have to say, i was skeptical. how do you make a 25 minute speech into a book that’s not just…a speech?
you hire chip kidd, master designer, and he makes it all better.

the results are this amazing little book that’s deliberately designed like a designer’s worst fucking nightmare.
red on turquoise, pages offset wrong, the terrible works. it’s brilliant, and you can buy it at on AMAZON or POWELL’S or all sorts of other places… (watch the original speech HERE/listen to the NPR piece onnit HERE): 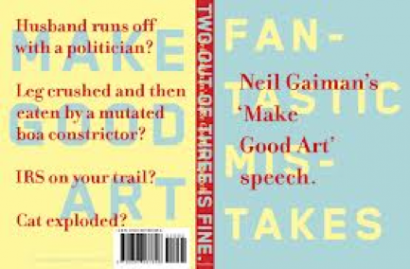 the night before he launched the book in philly, i did the philly house party, which was amazing – as usual.
here’s a pic kyle snapped (and my take on it as well): 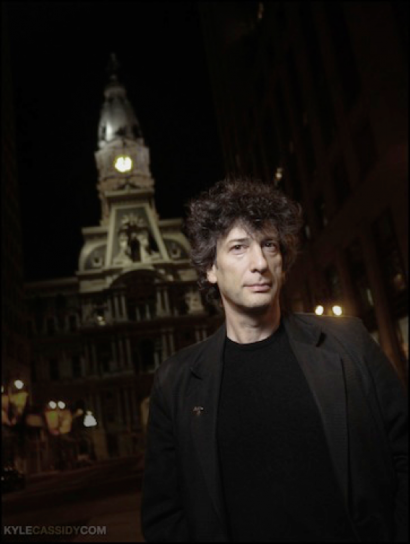 ANYWAY…thank you to everyone who came to the house party, and to barb for letting us all use her house. magic.

i’m sensing a pattern with these house parties.
every one of them is balm for the soul.

this one had an interesting interloper….

jon ronson, a writer/novelist by trade, is writing an article about me for the guardian UK.
he’s the author of “the men who stare at goats”, “the psychopath test” and “lost at sea” (a collection he’s just put out).
but i was encountering him in his role as my guardian interviewer.

he said he didn’t just want an interview, he wanted to follow me around and see me be with people.

i asked him if he wanted to come to the party with me.

“you can’t be weird,” i said. “you can’t really come as an outsider. you have to actually come to the party and drink with us and possibly sing songs.”

but he said he was game.

by the end of the night, jon was reading his short stories off his phone to the living room, which was an assemblage of some of the warmest, wonderfullest people i’ve been with lately. 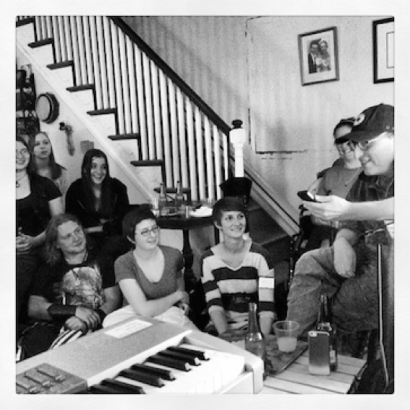 he fit right in.

here’s a picture of me with jon, and of me with every single person at the philly house party.

all photos by coriander under the mentorship of kyle cassidy (click ‘em to enlarge). 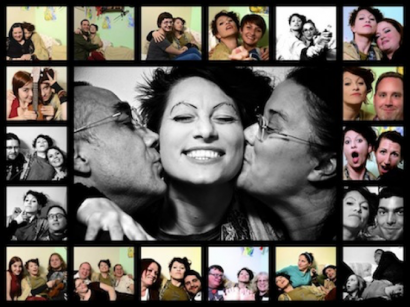 they’d just met. it was perfect. 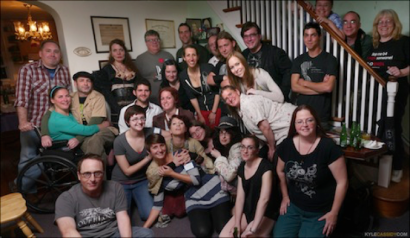 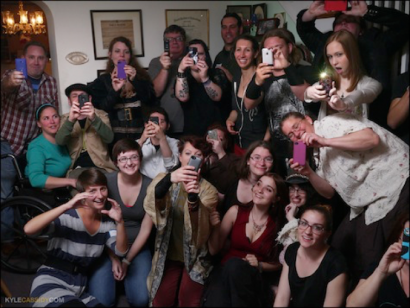 then i came back to boston, just in time to get to a cocktail party at the boston globe.
i wasn’t exactly sure why i was there, but i’d been invited and the boston globe is my hometown paper, so i thought, go…
maybe something interesting will happen.

i’d brought neil, and we stood there awkwardly holding our paper napkins and cheese and strawberries (which were excellent, by the way), and wondering what the hell we were doing there, when someone went up to a podium and started up a powerpoint highlighting and honoring the top 100 companies of boston. i hadn’t heard of any of them. i leaned over to neil and tried to apologize for dragging him to a giant lobby filled with people in suits, even though we’d gotten to talk to some nice people from the globe itself (including mark pothier…who is the deputy business editor of the globe and used to be in MINISTRY! MINISTRY!!!!).

so one by one, business people walked up to the mic and talked about boston unity, and how weird and hard shit has been around here lately, and how we all need to stay strong and help each other…

then there was a “and now the moment you’ve all been waiting for” speech and the top company of the year was announced.

it was smith & wesson, the gun manufacturer.

there was an intake of breath, a short pause, and then a smattering of polite applause. 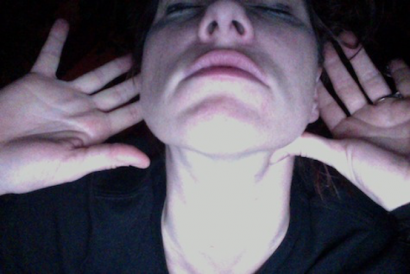 p.s. i’m on TED RADIO HOUR today. if you’re an NPR-head want to listen to the podcast, head HERE (for iTunes) or HERE (for a direct link via NPR).

OH and p.s.s. there are still some tickets left for the brattle theater movies that neil and i are showing each other this weekend in cambridge.
let’s escape all the guns, bombs and drama AT THE CINEMA!!! tickets & info HERE.