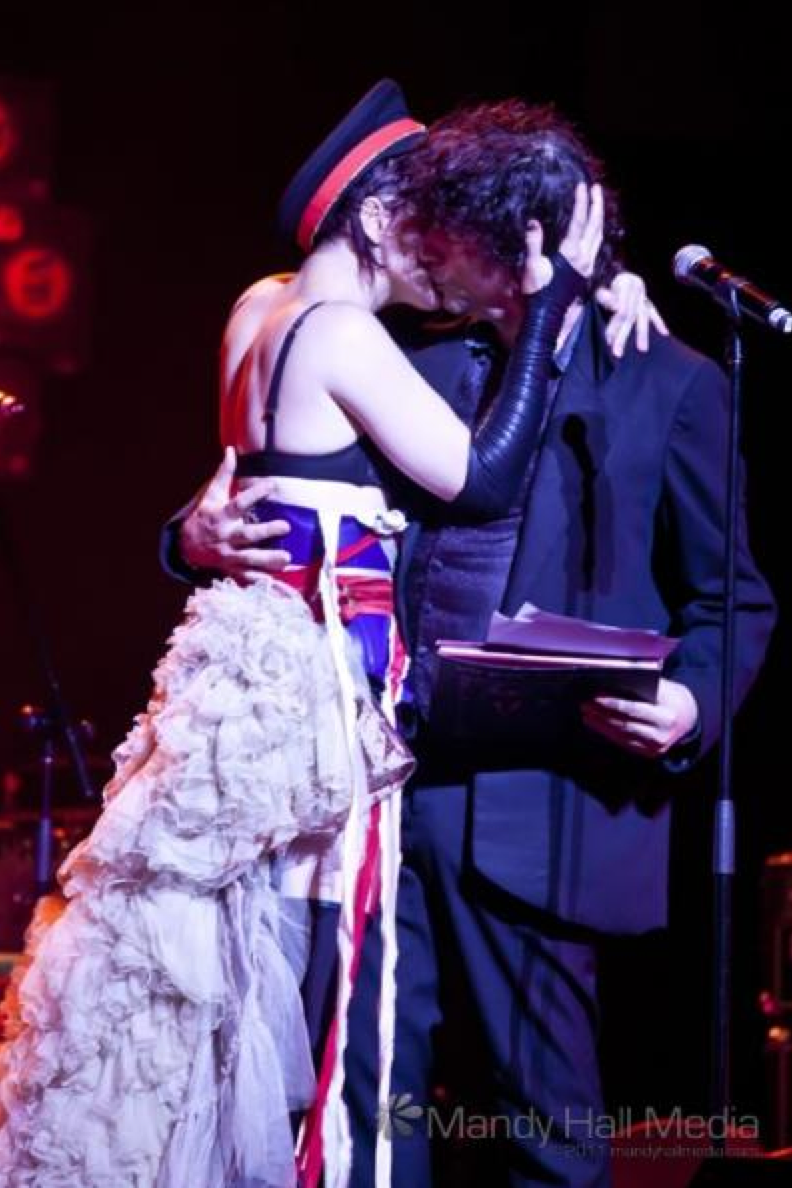 doors at 6:30, show soon after, ages 18+ (sorry to those wishing for it to be “all ages”)
RSVP/tell your friends HERE on facebook, and please tweet it to holy hell. the more, the merrier.

and YES. as promised, there will be a NINJA GIG for the people of sydney at CARRIAGEWORKS this SATURDAY, the 29th.
it’s ALL AGES.
it’s also FREE.
it’s at 7:30.
bring friends, food, flowers and love but do not bring any fucking VB or any more vegemite sandwiches…because really, what the fuck am i going to do with a vegemite sandwich? 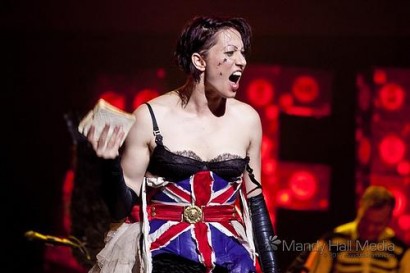 photo by mandy hall (all other blog-photos by her as well, unless otherwise noted)

the jane austen argument will likely be there, as will the amazing kim boekbinder.

the venue are letting us squat there, so it’s not as free and loose as a ninja gig on a beach, but it should be pretty fucking rad.

sydney. thank you.
to all the people who came to the opera house show….
it was completely surreal.

truth:
i had a really hard night. i met a ton of you in the signing line after the show, and i’m glad you stuck around.
i hugged many of you, and i think i needed it more than you did.

it was a tough show for me. everybody seemed to love it. that made it even harder.

how do i explain this?
i feel like i’ve made a new personal art form out of manic improvisation.

i played the fucking sydney opera house for about 2,000 people.
and went on stage with almost no plan, and what plan i had, i managed to totally trash by accidentally skipping 6 songs ahead in the setlist, baffling the back-up band, and doing the entire show out of order, losing songs left and right…all after hitting stage 15 minutes late due to the entire show schedule sliding off course. this is a keeling ship i’m used to riding on.

the upshoot? i almost never regret things. but god, i regretted that i didn’t get to close my show with “australia” last night, since i lopped it off the set list by accident. also left on the cutting room floor of the sydney opera house fiasco was a beautiful version of “the flowers” that i was going to cover with the jane austen argument, and much more significantly “formidable marinade” with the full band of Mikelangelo and The Black Sea Gentlemen, one of the things we actually DID know we could play. all in all: a completely random fiasco, a classic AFP wonderfully entertaining fuckshow.

who else figures shit out on the fly in a venue like that. does ANYBODY?

i would have traded those two dresden dolls songs and that tom waits cover in a second if i’d had my head about.

upside down during “missed me”: 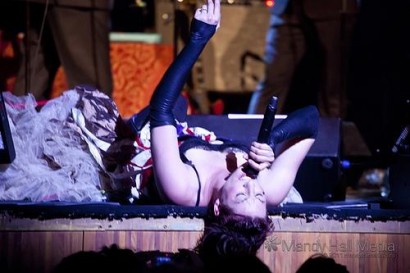 on the upside, we barbecued with fake dry ice on the opera house stage, and we made a huge fancy venue feel like a sloppy nightclub of drunkards, as you can see in this pic from during “MAP OF TASMANIA”: 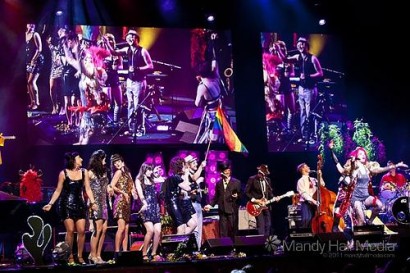 we’ve got the rapping kim boekbinder, holly austin (a beatboxer from sydney), jane austen argument, and, well, everybody…

this, everyone seemed to feel, was an accomplishment in and of itself.

we played some beautiful music.
we had a bogans versus artfags theme that ran through the entire night. eric brought a boombox onstage (thanks ian!) so we could tune into the triple j hottest 100 #1 song, AND he made surpirse vegemite sandwiches.

the opening bands were sublime. 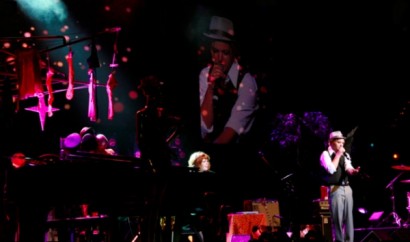 mikelangelo and the black sea gentlemen mopped up the blood in balkan style.
here’s me & mikelangelo, from later in the show: 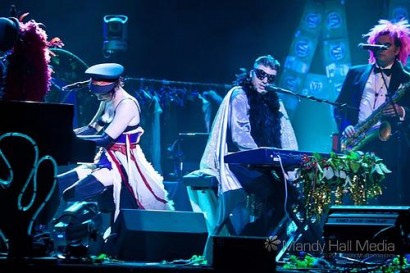 i feel so honored to be around such talented fucking people.

OH, and we had GOGO DANCERS…
me & go girl gadget go go during “oasis”: 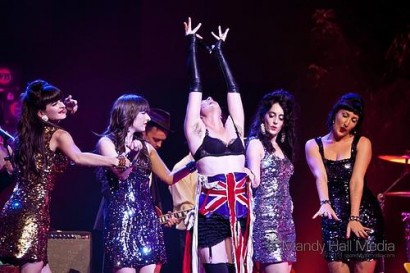 i mean…the show was actually pretty fucking incredible when i think about it.

neil wrote a brand new poem about Megafauna, which he finished at 3 pm the day of the show. it was incredible.
he read from Who Killed Amanda Palmer, and read me a love poem.
the man is, as he proudly repeated to me in the signing line after a fan christened him, amazeballs.

after the show, i felt this really creeping awfulness.
i’d hit the stage unprepared. this i knew. i hated myself for pulling off the show.

marianne faithful said it best, in the song that sums up nights this this, “sliding though life on charm”:

is it such a sin i never ever tried too hard?

it’s true. people are sometimes so impressed by my ability to get on a stage that size whilst sticking to NO PLAN WHATSOEVER that it seems that my balancing act has become an art form in itself. i don’t know, sometimes, whether to be incredibly proud of this or to bury my head in shame. night before last, still hungover from the kind of PMS that plagues me particularly badly when i’m on the road and also hungover from the realization that being a wife and a rock star at the same time is not a skill i’ve not yet mastered, i sort of collapsed. i’ve never felt that strange after a gig.

i think i set a new level of amazement at myself for deciding what song to play literally 2 hours before the gig, and practicing then 15 minutes before hitting stage.

whatever.
it worked.
at least it appeared to have worked.

i made myself feel better by writing a guilty confession to nick cave. it helped a little.

also, neil helped.
he held me late at night and i cataloged for him all the things i’m currently afraid of.
i love him more and more every day. 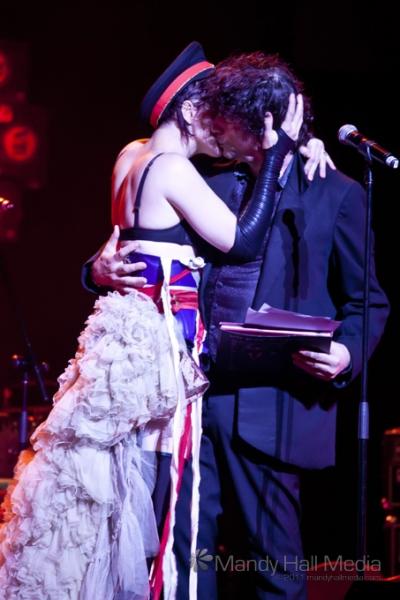 this all has been a running consideration since i stopped touring with the dresden dolls and started touring solo.
i was so absolutely punchdrunk with freedom for the first year of solo touring that i went completely off the wall with a sense of HOLY SHIT I OWN THIS STAGE AND CAN DO WHAT I WANT.
but the people i brought with me, like the actors in the danger ensemble (they had to have a setlist, for their costume changes, and i had to stick with it) and having a few extra musicians with me (like zoë and lyndon) helped to pin things into place. i wonder how much i want to be pinned. my whole life and schedule suffer this weird consideration: it’s the balance of non-scheduled, scheduled and overscheduled, non-planned, planned and over-planned. making a space for the madness but not letting the madness overtake the space.

sometimes i just think i’m sick of getting away with it.

and then sometimes i think that i’m too hard on myself: that the mess is the art, that i’m perfecting my own art of imperfection.
maybe this: if i can improvise my way through a gig at the fucking sydney opera house, i feel like it’s time to set my sights on what the fuck else i can do.

i needed to rant that. 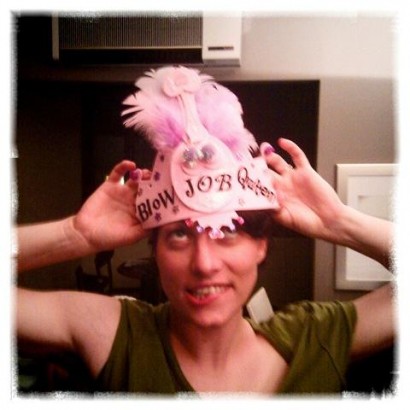 if you can’t read what it says due to the superhip app processing, it says BLOW JOB QUEEN. double reference points, i suppose, for liz phair AND amanda palmer lyrics.

p.s. a few more random pictures from the evening:

my name made out of VB boxes. amazing…. 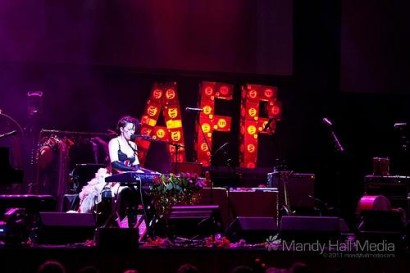 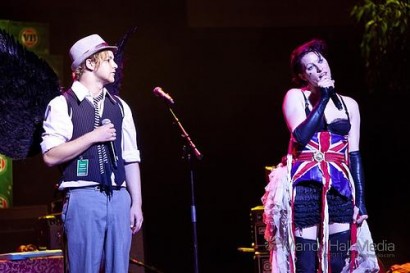 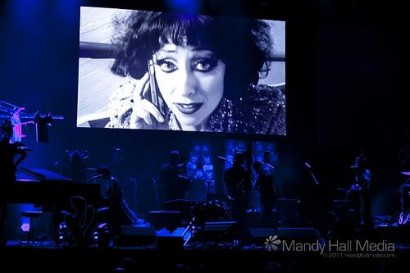 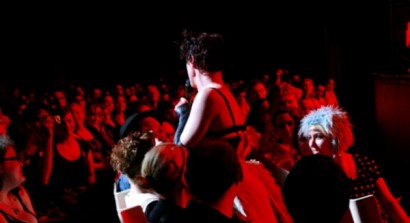