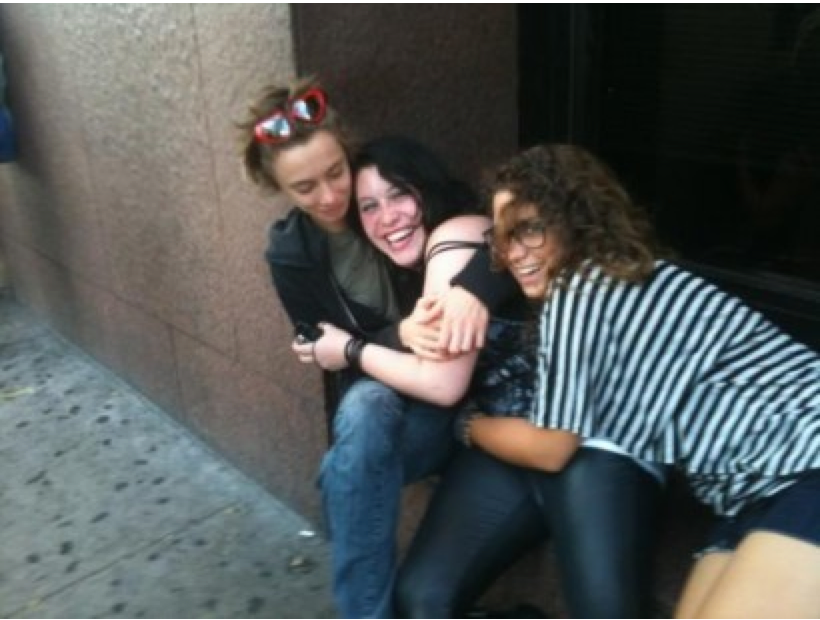 i’ve been going a million miles an hour – more faster even than that actually.

days have been spent offline in the dark cave of rehearsal and the show is coming together like GANGBUSTERS. i’m twittering pictures every day from rehearsal but haven’t had the brain or energy to condense them all into a decent blog. i keep meaning to find the time and it keeps not happening. i have been attacking my inbox bit by bit early mornings and late-nights and getting NOWHERE – the pile grows, i sink underneath it.

this was all my choice, so i can’t complain too loudly. i chose to do this musical, i chose to do a staff turn-around this month, i chose to book a dozen additional late-night shows on top of my already hectic show schedule, i chose to release a record in australia next year and do a tour to go along with it (yes, i did. but i’m not telling you about that yet – howEVER, if you’re in OZ/NZ and you have ideas for weird venues, click HERE and help me out).

i chose to do all these things. i’m a fucking nutjob.

all this being said, i was quite looking forward to my friday night. i was planning on going into full #LOFNOTC (loser on friday night at the computer) mode and attack a pile of management/schedule/booking/project emails and was quite chipper when i skipped out of the full first rehearsal of ACT I at 5 pm. i was like: oooh, 5 pm. i will run home and email for 6 straight hours! i might even get my inbox down to 400!

this is an exciting friday night to me.

but at 5:05 pm i got a text from brian viglione, the drummer for the dresden dolls. he was in town (surprise!) to see willie nelson play.
i resisted willie but met brian for food at the trident cafe and we horsed around until about 6:30.

at 6:30 i walked home. on my way home, i passed the berklee school of music (which is about 6 blocks from my house). brian and i have always considered berklee an evil force: a soul-sucking music school where they steal your passion and try to churn you into a party-line toting industry whore. maybe mostly we’re jealous. i dunno. brian went there to the 5-week summer program and HATED it. his family saved up tons of money to send him and brian went in raging and ready to play and remembers being told by some professor that he better “pack it in if he thought he was going to be a ‘rock star’ and have a REAL plan about his music career” or some such shit. EAT IT, SUCKER. anyway, his experience wasn’t all that positive. so i joined his hatred for fun.

the mood in front of the berklee building on mass ave was decidedly chipper and there were lots of kids hanging out on what’s called “the beach” where everybody goes outside to hang and smoke.

i don’t know what exactly compelled me to stop and ask these three random kids if i could take their pictures, but it was probably the fact that they were all HUGGING and looked like THIS:

i mean come on: 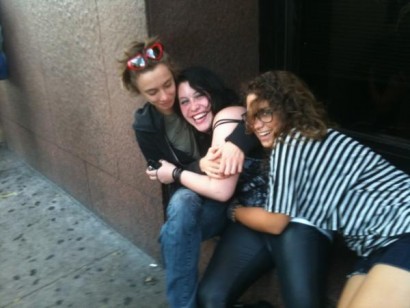 it turns out it was their last DAY of the 5-week program…the same one that brian abhorred.
everyone was apparently outside the school having a parting-day love-fest

(they didn’t know who i was, which was probably for the best.)

i took a photo.
they all handed me their cameras and asked for shots. i obliged.

a pretty girl with a lip-piercing came up to me (not pictured) and told me she was a fan.
i chatted with her. her friend came up, i chatted with her. they were all leaving summer school and hyped up.
then i walked away. wait, no, first i gave them all “cabaret” promo stickers, even though they were leaving town.

half a block later the beautiful creature you see pictured on the upper left ran after me and said “wait! wait! you play cabaret music??
i love cabaret music!!!” i said: yes. have you heard of the dresden dolls?

he said: oh my god don’t tell me

he threw his arms around me and made a kind of soul-squee sound and ran back to his friends and dragged them over.

his name was tristan, from saratoga springs in upstate new york.
in the middle (pictured above) is nicola, from mexico city. she sings. on the right is alejandra, from monterrey, mexico. guitar.
they had all become besties over the 5-week berklee program and were all about to leave each other, all of them flying home sunday.

then tristan said: if i get a practice room downstairs, can i play you my music?

i said: what do you play?

i said: (thinking about my 7 hour email marathon to come) fuck yes. play something for me.

so the four of us went into the berklee building, where tristan was informed by the chick at the desk that all the practice rooms had just been locked for the day.

so the four of us walked to my house.
i twittered on the way.

i showed the kids around the house (they loved it, how can you not, it has a treehouse and a geodesic dome on top).
my good friend cormac bride was in the kitchen, since i’ve been lending him my piano day-times while i’m at rehearsals to record his new record.

i said to cormac as i came in the door: i found some 17-year olds. this one plays piano. he’s going to play for us.

cormac said: PERFECT. i was just about to log all this shit i recorded and i DONT WANT TO.

and then tristan sat down 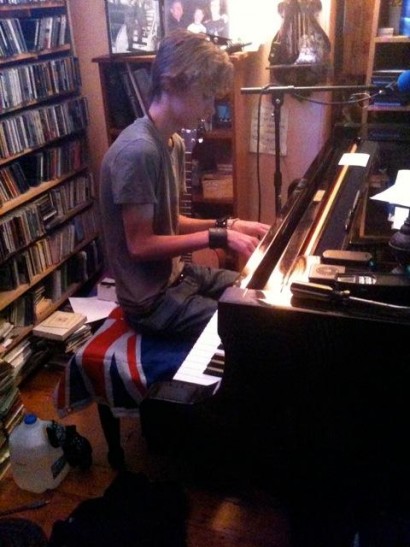 ….AND BLEW MY FUCKING MIND.

it was at that point i decided to webcast.
my regular account wasn’t working, so i fiddled around and opened up a new account while tristan waited. (BTW: the reallll party on the internet is back to normal now. you can subscribe/watch stuff HERE. there are some new clips up there as of last night which some of you will die over. that’s another blog, though)

SO, tristan and i wound up webcasting for over an hour while i twittered people over.

more than 2,000 watched and commented.

since everyone was asking, this is tristan’s
myspace
and
facebook

will i pull an ellen degeneres and start a record label to release his stuff?
wait, don’t i already HAVE a record label? holy shit, i do. 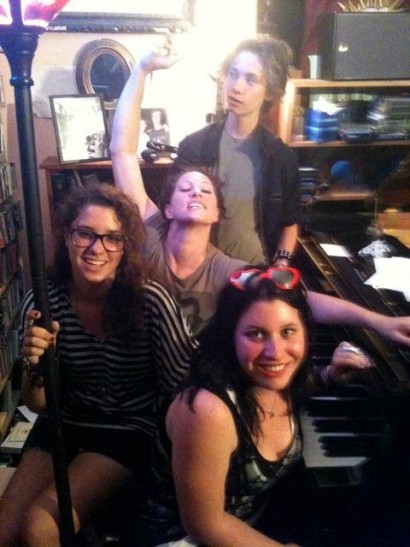 then i called the night a fucking wash, went on a late-night jog with casey instead of working, gave us both seaweed mudmasks, cut up and ate a pineapple, set the alarm for 5:30 am,
a
nd started over.

i love my life more than anything in the whole fucking world.
i talked so much about how much i loved my life last night that casey threatened to punch me 4 times while we jogged.

next up: the REST of the weekend, and a “cabaret” update. i promise.

i’m taking TRISTAN INTO THE STUDIO!!! help us pay for it, mofos.