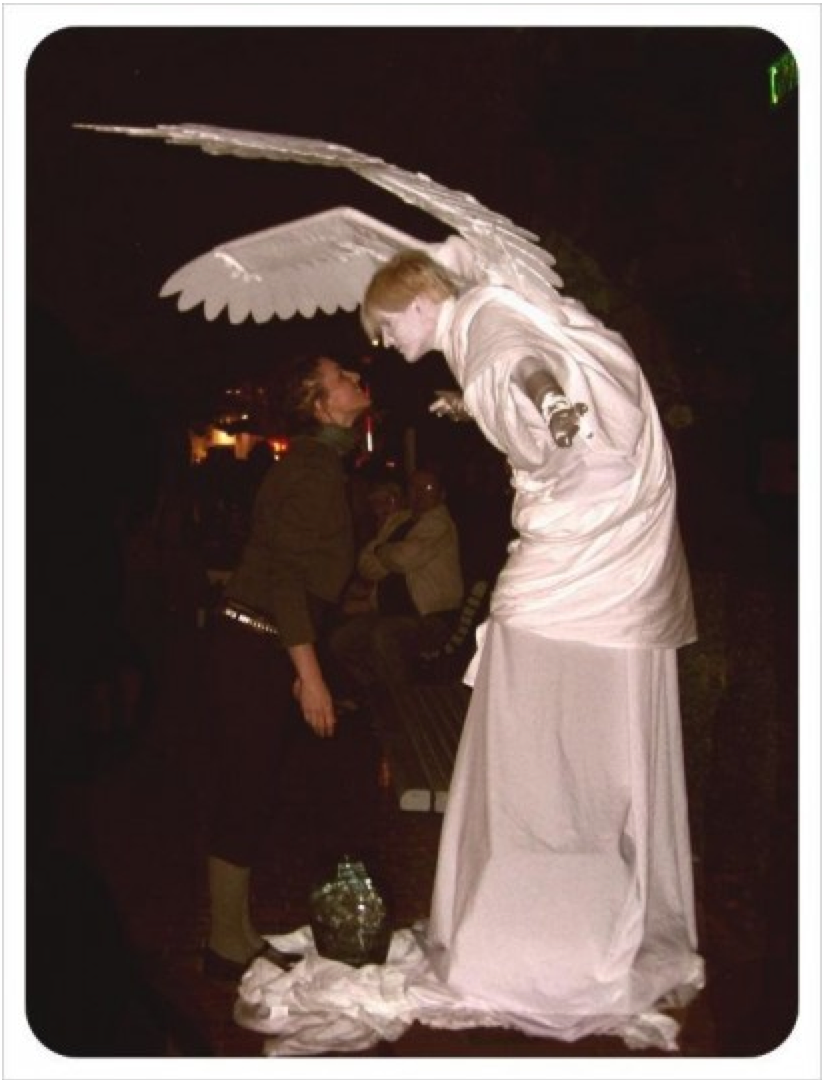 so, tristan was friday night….yes, that was the night i was supposed to catch up on work/calls/email/scheduling for the fall and winter, and all the blah-de-blah that is the monster of my helpless little inbox.

gotta say – reading all the blog comments is truly inspiring…as we go, i’m realizing with every passing day that i’m re-shaping the way i think about art and performance and connection through the experiences that you’re telling me you’re having. webcasting wouldn’t really work or feel magic if there wasn’t someone on the other side of the can-and-string, shouting back – and to read that people were brought to tears by tristan’s playing and that people watching felt like they were witnessing something special and immediate – that feeling of WE ARE HERE NOW. it’s what feeds me, drives me, fills me as an artist. even more, i think it’s what I FANTASIZE about when i flip the switch and turned the camera on the kid, having no idea what would happen. i always pray for that magic – for something to have an effect on something.

so thank you all so much for all your beautiful feedback – it’s food for the whole process and i love reading it.
and in more tristan news, we’ve been emailing and talking about getting him into a studio and working on a decent recording of his piano songs.
it shouldn’t be too hard. maybe we’ll use kickstarter (who are SWELL folks by the way. i’ve been chatting with them) and print up a few records – we’d only need a few hundred people at a few bucks a pop to pay for it. and i think that would work.

so back to reality – reality was to be thwarted for a few more days.

the rehearsal schedule has been brutal: 8 hours a day, 6 days a week. sunday is the only day off.
so this past sunday was going to be the ULTIMATE catch-up-on-work day – pffft friday night. this was going to be the marathon of all email destruction, the motherlode of productivity, the yoga-doing, salad making, sitting-at-desk-in-four-hour-heats MEISTERWERK of amanda palmer office organization, including a DAY-LONG meeting with sean francis (@indeciSEAN), my internet downboy who’s helping me run the whole business of AFP.

this did not happen.

i got a text from john cameron mitchell to go down to provincetown in cape cod and sing with him in a bar.

he said: but we could sing a neutral milk hotel song together.

i said: you’re destroying me.

he said: come. we will do hedwig songs and eat foods.

i said: you’ve defeated me.

[i think i’ve talked about john before in the blog but if you don’t know him, it’s time. he’s a strong ally on team rock love.
he created “hedwig and the angry inch”, a musical (turned film) that started as a teeny little pieced-together show in new york and grew and grew into a beautiful beast and i highly recommend ditching your plans tonight & running out and getting the DVD if you haven’t seen it. i see it as sort of the “rocky horror” of a new generation – and the themes are close to my heart….identity crisis, berlin, glam rock, and cross-dressing…i’m sold].

i called sean, who’s also a huge hedwig/john fan, and said: listen. i know we were supposed to have a day of MARATHON productivity, but john cameron mitchell asked if i’d sing in a bar. we have to go to provincetown and probably have our meeting in the gayest internet cafe in the world.

so onto the ferry we went after my saturday rehearsal, JUST in time to get to dinner with john and to run over “two-headed boy” (john and i share extreme love for neutral milk hotel) and a songs from hedwig (“midnight radio”)

i sang it over and over on the ferry, which you can do, because the ferry is LOUD and people can’t hear you singing to yourself.

sean got a picture: 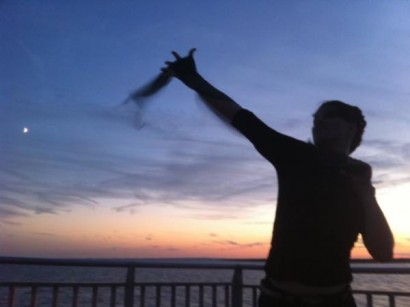 and i got a picture of sean: 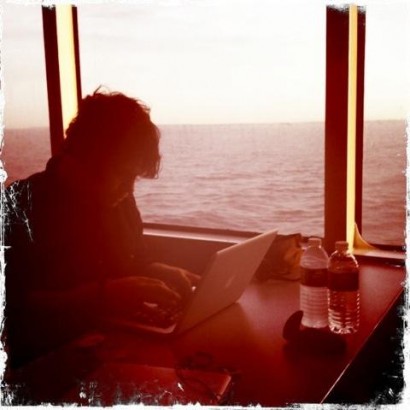 this is what sean is often doing. but this time, he’s in a big boat.

and we landed in p-town, home of the gayest city-wide party ever known to man (in massachusetts at least) and had two magical nights of pure awesome.
i didn’t announce the show (at ALL, not even via twitter – until about 5 hours before the second show saturday night…and i was right, a few hardcore people DROVE from new york to catch it, holy shit).
but i did tip off the whole cast of “cabaret” and a few of them (to be specific: steven mitchell wright, aly trasher aka sally bowles & her b-friend, christopher thomas and our dramaturg jessica green) piled into a car and bravely drove the 3-4 hour stretch to make it in time for the first show.

at one point, i hopped on piano and tried my hand at “mein herr” – which i’d NEVER tried but for fuck’s sake the songs only two chords – and aly trasher aka @aTrasher aka miss sally bowles herself got a taste of performing in an ACTUAL seedy basement club in front of a bunch of decadent beautiful people and life, and art became a mirror of trashy gloom wonder cafe chair miraculous. watchferyerselves HERE on youtube.

SO. back to the reason this is all happening.
john.

john was mesmerizing. he read a few poems and then launched into a long story he’d written about a trip to a gay film festival in russian that was in turns gut-bustingly funny (the story was called “forced” – a nod to the nomenclature of the complimentary condoms that came in his russian hotel room. that’s what they were called; “forced” brand condoms. lovely, in so many ways) and soul-piercing, soul-baring….he had us doubled over in laughter one minute and the next we were silent, with him in the experience of pained and masochistic intimacy and smashbroken infatuation with strangers. it was perfect, holy, and steven and i looked over at each other from across a table covered in gins and tonics and our eyes caught each other and said
YES
THIS 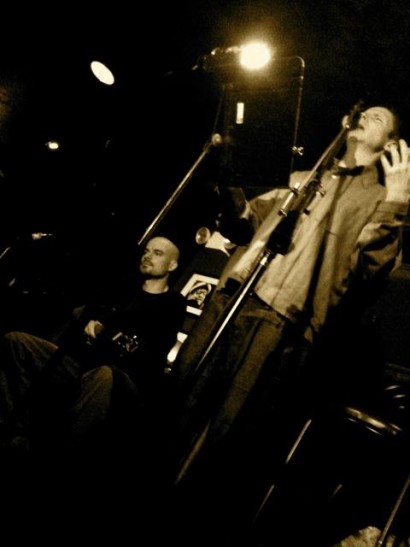 the next day i ran on the beach barefoot and swam in the ocean and true to my prediction, sean & i spent the better part of 5 hours in a gay internet cafe.

i won’t go on and on about provincetown – but let me just say: i hadn’t been there since i was 15 and i had NO IDEA what kind of party had been happening a mere 100 miles from my city of boston.
holy SHIT the town’s on FIRE.
it.
is.
FLAMING.

there was basically a gay-as-FUCK party in the street from dawn til way late and the vibe was somewhere between the edinburgh fringe and bourbon street in new
orleans.

i was in heaven.
we ran into blake, my ex, the angel statue…. 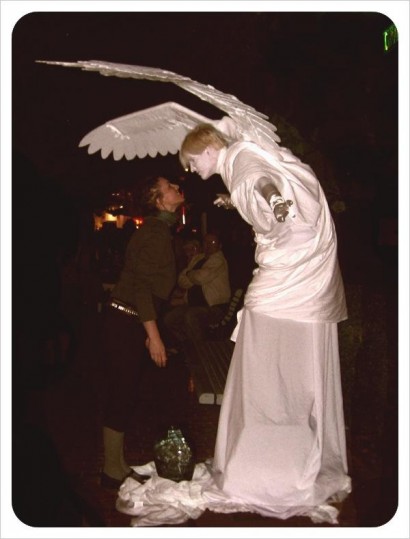 and then it was sunday night, time for show #2 with john. same bar.
sean and i decided to try to webcast the show from the new iPhone (i’ll link below), and it WORKED.

i saw from her twitter that she was in p-town to test out her new stand-up show and so i texted her and asked john if we could invite her over to guest.
she sang a hilarious song about sperm banks with garrison starr on guitar and backup vocals…it’s called “gimme your seed” and is from margaret’s new album (“cho dependent” – out NEXT WEEK – which you can pre-order HERE).

and then, most incredibly, julian koster, who i knew mostly from neutral milk hotel but who’s also an incredible solo performer, showed up.

stop. breathe.
you cannot know what it felt like to sing “two-headed boy” with john cameron mitchell while a member of neutral milk hotel stood watching in the audience….but it was topped by experience of having julian come up onstage and play SINGING SAW with us when we sang “midnight radio” and everybody in the crowd sang along. i died.

julian also played a song on banjo that made everybody see god a little. 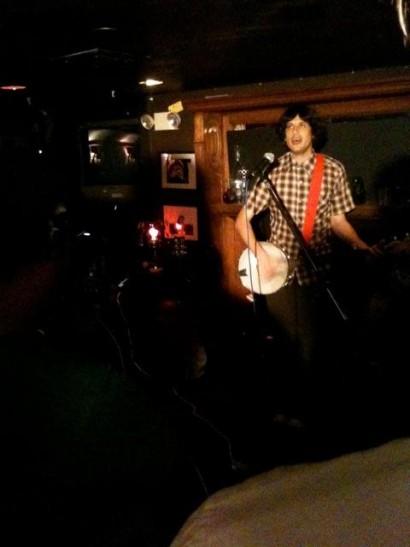 after the show we went to a piano bar in a living room on a hill and crowded around a piano played by billy – i grabbed the mic, tore my shirt off and sang “mein herr” in my bra to a room full of old gay men and felt more at home than i have in years. good GOD it was invigorating:

then john requested david bowie and sang “ziggy stardust” while we played drums on the table and with our wineglasses. and then we ALL went to the fudge ship at 2 in the morning and got turtles, toffee, and ice cream. julian is holding his singing saw bow. this was about 15 minutes before we got down the street and he realized he’d left his banjo in the fudge store and had to borrow someone’s bicycle to ride back and find it. i never saw him again. 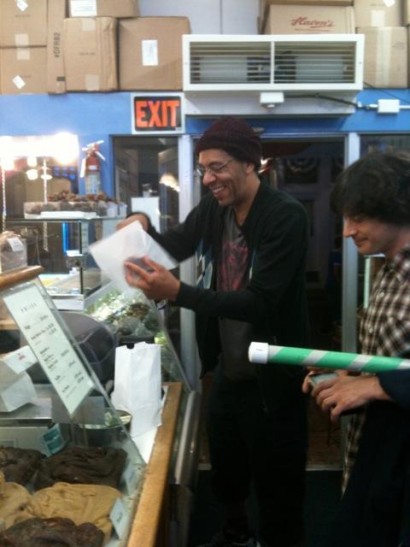 it was the perfect weekend

you can see the whole hour from the bar (called the grotta) on my real-deal ustream channel HERE. and go and subscribe, too: http://www.ustream.tv/channel/party-on-the-internet

watch the whole thing. it will make you cry.
it saved a little jerky-like, but we’re digging through our various phones and laptops to see what else maybe got magically captured. (follow @AFPwire and we’ll post links there as we dig out and upload)

oh! one interesting note before i go: i spent much of dinner sunday night talking to john and julian about twitter and social networking, which was REALLY interesting because they’re both completely offline artists, and we talked lot about the pros and cons of things like twitter, time, mind-space, energy, art and internet. the discussion rages on.

i still owe you a new “cabaret” blog.

p.s. if you’re in/near BOSTON & interested in being an EXTRA/AMBIENT PERFORMER/ARTIST/SCHEISTER at cabaret, the audition deadline is TOMORROW!!!
go HERE for more info.

p.p.s. this whole magical story is also a long way of saying: if you’ve emailed me in the last few weeks and haven’t heard back, i’m sorry.

a grand hello from the inside of my head. (WARNING: DO NOT ROCK.)