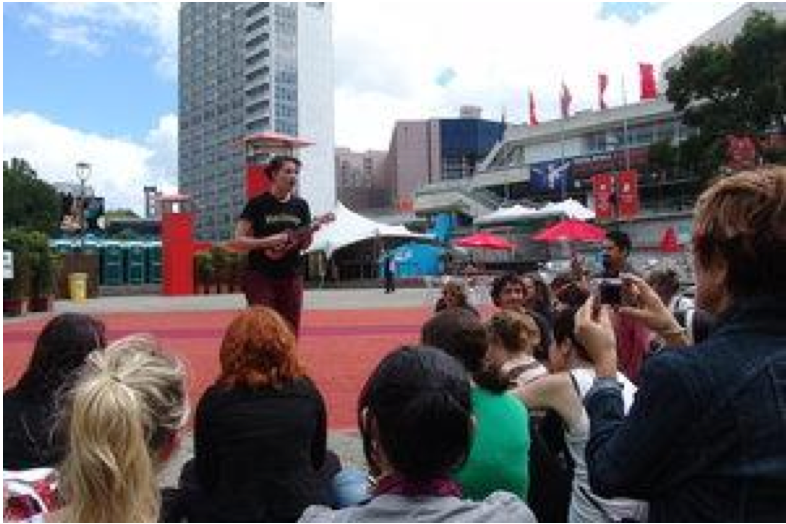 i have a feeling in my body which, i think, could technically be described as exhaustion. i do not feel human.

adding the tasmania show at the end of the australian tour was fun but very, very, very stupid, as it meant that i had about a 24-hour turnaround after flying 27 hours before i had to act like a professional human being again and get back on the rock star hamster wheel.

i’m in texas, at south by southwest (sxsw), which is a huge music conference for musicians, music business types, and the occasional fan straggling along. i’m playing a bunch of parties, speaking on a panel (today, at 3), and basically running around for the next 48 hours pretending to be human. which, as i pointed out, i am not.

the australian tour was fucking amazing. i wish i was feeling more human, i would put it into words.
everybody was so beautiful, and being cut off from everywhere was, in a way, liberating. it was just the music, and us, and me, and when i hit the wall of exhaustion about a week ago i started falling into people’s arms after shows and i think i needed them to hug me more than they needed me to hug them so, like regina said, it worked out nice for the boths of them.

there are some gorgeous fucking pictures from the tour, we’ll dig and post.

mostly, though, i’ve been twittering for survival.

i get to this point in life or tour where i can’t even pick up a magazine and focus on it because my brain is so tired. i am at that point.
twittering works for a person who is feeling like a scattered assortment of 56 very small brain cells propped up on a pair of legs.
i have about enough intelligence lately to speak in 140-character thoughts. so twitter it has been.
i spent an entire day twittering from various airports one day when we had a ridiculously stupid 3-leg flight to hobart, tasmania.

i twittered ticket giveaways every day until i maxxed out the guestlist.

i twittered some random flashmob-come-say-hi gatherings in australia and was overwhelmed to see that it WORKED.
i would pick out random places on a map nearby and twitter the night before.

i was at a point in auckland when i was just at the end of my rope, barely holding it together and i twittered the night before the show for people to meet me in front of the spiegeltent at 3 the next day.
(i also did this because the shows were not booked as all ages and i was getting heaps of sad emails, so i figured i would give people a chance to at least come and say hi and see me attempt to play the ukulele and get shit signed).
anyway: 10 pm twitter, and by 3 pm the next day, i walked over from my hotel with my ukulele case and was fucking shocked to see a group of over a hundred people.
a little teenage girl who spotted me first ran over and dive-bombed me. i let her. and then a bunch of people ran over and sat down and i just burst into tears. i couldn’t believe how simple it was.
all i had to do was ask, and all these people came, and it was so simple. someone actually got a really beautiful photo of that moment: 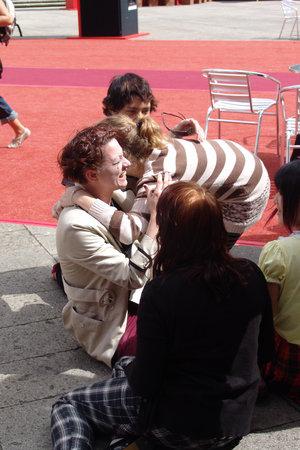 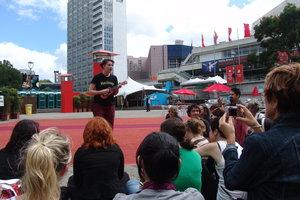 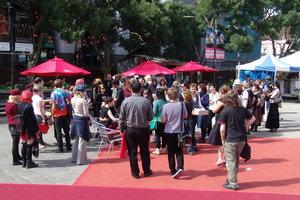 i also, off my head backstage in the dressing rooms and sadly trying to ignore the void that was left by the departure of my dealry beloved danger ensemble, i starting writing impromptu songs on the ukulele.

i had written a song called “australia” that i debuted in sydney at the opera house (it was good. it’s a good song.) and then someone from new zealand complaiend that THEY didn’t get their own song. so i wrote one for them. this song took about 25 minutes to write. i was very proud.

and then i wrote one for tasmania, because i felt bad for them.
and because dianna, the wonderful girl who i was staying with and didn’t blink when i puked in her bathroom because my body was doing a tasmanian version of GIVING UP life, if fact she brought tea and apsirin, told me that numb-skulled bogans will lean out their car windows and yell at girls to “SHOW ME YOUR MAP OF TASMANIA”!!!!

i wrote this song in under 15 minutes. i was very proud.

soft and sweet and shape like a triangle!
some girls want no shape and they shave it all
i think sad it hurts with the stubble
walk in named look like an eight year old!
i say grow that shit like a jungle
give ‘em something strong to hold onto
let it fly in the open wind
if it get too bushy you can trim

…..i really do want MIA to find this song and put phat beats to it.

now i go try to be a human.

p.s. for those who care, yes i got my period. right at the same time i started throwing up in tasmania. it was awesome.

this is…the most beautiful thing. (kambriel is gonna help me take a lil piece of you on tour)