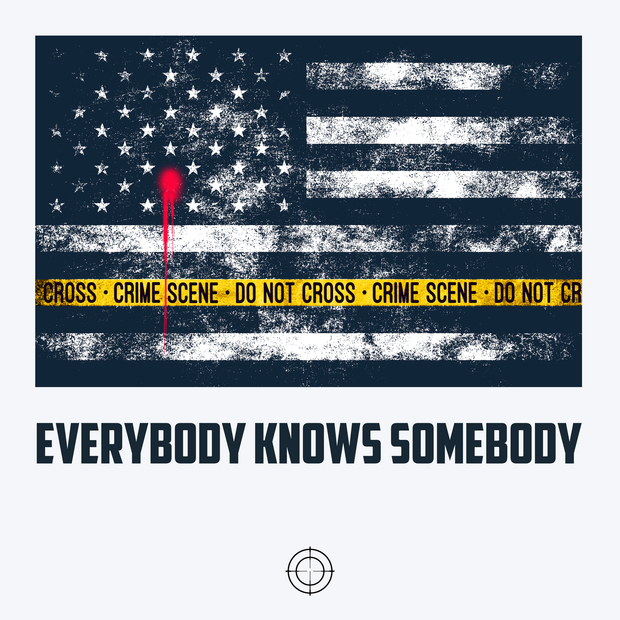 EVERYBODY KNOWS SOMEBODY: a sing-along with art by manuel oliver {official thing}

i wrote a new song.

it’s a sing-along about mass shootings. 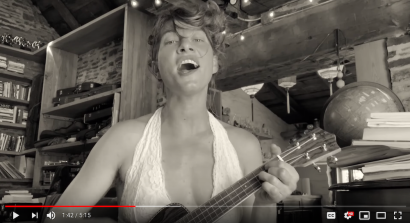 well…..timing here in patreon-land is always a bit bizarre….but, hey, that’s why i do things like this.

remember my old “how patreon is changing everything” video, where i thrill about the ability to use funding to make immediate art about the world all around me? 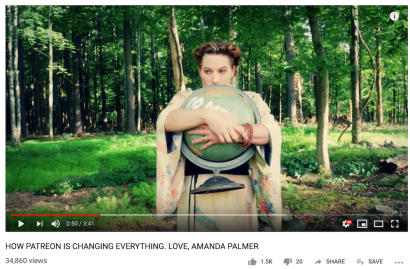 i never do things right. which is why i’m me and not a pop star.

the “drowning in the sound” video came out only a week ago, and by all “marketing” and “social media strategy” standards, i should totally back off from releasing any new & shiny content for a few weeks at least, to let it flourish and breathe.

but i just wrote a new song, it’s relevant to the world, and i wanna put it out.

and because i have this patreon, i get to do what i want. so i am throwing caution to the wind and just putting it out, because i think NOW!, FAST!, ART! that responds to life, now, is important.

it is important because art and artists should be able to move at the speed of life.

last week i wrote a new ukulele song. i haven’t written one in years.

after the news about el paso and dayton happening back-to-back, i was just like…

there’s a mass shooting MORE THAN ONCE A DAY in my country.

at the rate we’re going…won’t almost every town, every person, eventually, be affected? won’t the pain go fully viral?

i got an idea for a song.

it’s called “EVERYBODY KNOWS SOMEBODY”.

i played it live on the patreon webchat two days ago (and i almost changed the title to “the gun song” by popular demand…but it just doesn’t sit quite right. i mean….it is A Gun Song, The Gun Song, but that’s not the title. just like “a mother’s confession” has become “the baby didn’t die” song. i’m fine with that.

a few days ago, on twitter, i sent out a call to artists, so i could whip up some album cover art for this single: 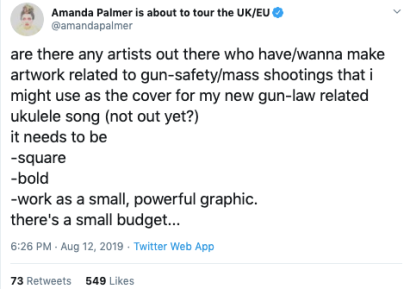 a few people wrote to me suggesting manuel oliver, including david hogg, a survivor of the parkland shooting and anti-gun activist…. 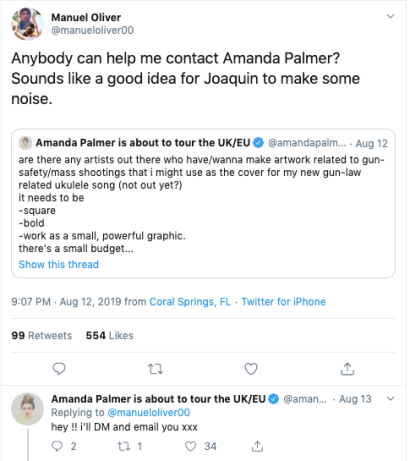 manuel oliver not only a great activist/artist….he’s also the dad of joaquin oliver, who was murdered in the marjorie stoneman douglas high school shootings in parkland, florida.

if you were here on my patreon after the parkland shootings….you may remember that i re-recorded and re-released my school-shooting song “strength through music”, and put it out with all the prcoeeds going to march for our lives.

in that remix, i read every victim’s name from parkland aloud.

i didn’t know how to pronounce joaquin’s name right. i didn’t want to get it wrong. i asked around. 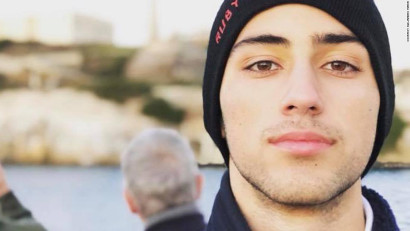 my heart was pretty much in my throat when i got my first text from manuel and he asked to take on the job.

we went back and forth over a few texts and emails…talking about music, this art and project, about joaquin and how he was a rebel and loved the ramones.

this is the artwork manuel made for us: 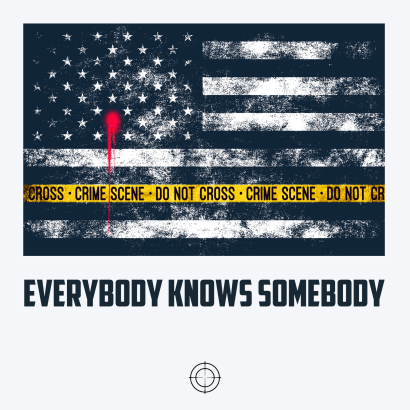 manuel wanted to also share these words with you:

Gun Violence is beyond schools, beyond Parkland, beyond our sadness and reactions.

It’s about waiting for that unexpected moment when you become the next victim.

Every mural, sculpture or song inspired by any victim of gun violence, represents a unique and beautiful way to read, feel and listen to their voices.

you can see his artwork being used HERE where the public can download the song on bandcamp. ($3+ patrons, your downloads will be in your inboxes in a second). 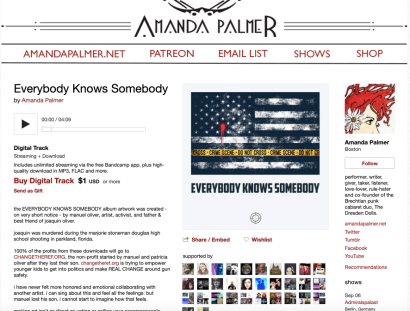 100% of the profits from the bandcamp downloads will go to CHANGETHEREF.ORG, a non-profit started by manuel and patricia oliver started after joaquin was murdered during the parkland shooting.

changetheref.org is under the umbrella of March For Our Lives, and is trying to empower younger kids to get into politics and make REAL CHANGE around gun safety.

here is a picture of the whole family – joaquin, patricia and manuel – that manuel sent me. 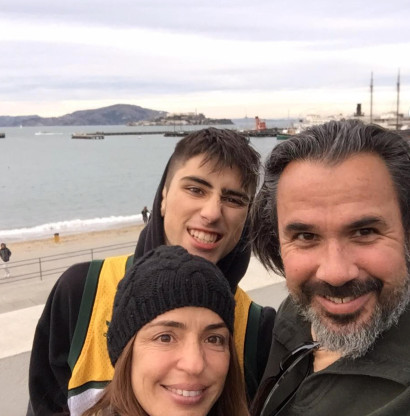 i have never felt more honored and emotional collaborating with another artist, even if it was fast and brief.

i can sing about this topic and feel all the feelings: but…manuel lost his son. i cannot start to imagine how that feels.

making art isn’t always as direct as voting or calling your congresspeople.

yet art can get directly into the emotional heart of the matter.

this song was written in response to the insanity going on in our country. gun violence and the deaths of ordinary people all over america is becoming NORMAL.

let’s call it what it is: a public health crisis. too many senseless deaths. too much pointless tragedy that could be avoided with better, safer, smarter gun laws.

too many people are dying.

too many children are dying.

when there are cheerful, multicolored bulletproof backpacks and being sold to children…

it’s too dark, it’s too wrong.

we cannot let this become normal.

art at the speed of life.

this isn’t new, this way of making art. look across the whole folk canon of history and you will see musicians picking up instruments and responding to the news cycle.

four dead in ohio by crosby stills nash & young. (in response to the kent state shootings)

sunday bloody sunday by U2. (i mean, it took a few years to come out, but c’mon it’s a great fucking song…in response to the1972 bloody sunday incident in derry where british troops shot and killed unarmed civil rights protesters)

mississipi goddam by nina simone (her response to the racist murder Medgar Evers in Mississippi)
all of these songs had NOW-power, people-power, political power.

but the songs’ reach into the hearts of the people was limited to the shows they played, the radio waves that allowed those songs to broadcast, and the physical record took ages to get printed. there was still a corporate, profit-driven bottleneck if you wanted to reach The People.

then came the internet. you could make fast art, and upload anything to the airwaves, but you would never be paid for your work if you wanted to go directly to the people and work fast.

i want to remind you:

in no other world of music-industry-approvals and major labels are you able to do this kind of thing this FAST – make a political song, record it fast, put it out fast, get paid fast so you can live another day to write more songs. usually there are long meetings, there are strategies, there are plans! things take weeks, months, years. or you can put it on the net…and never make a sustainable living.

over here on patreon, i am able to write a song like this, record it on my phone as a video the next day, get about 20 volunteers from the upstate new york patreon community into a recording studio with me a couple days later, and a day after that:

VIOLA. my song can come out. and make money. and that money goes to pay my team for working so hard, and means that we can divert all of the digital profits of the song to an important charity.

there is a revolution happening here on a few fronts. and i believe that we need to hear from the artists out there who are usually in the unheard minority: people who aren’t usually handed the mic by the media-people-in-power because they are too threatening/too female/too black/too political/too divisive/too young/too old/too “un-marketable”, and on and on….

the capitalist-driven art-factory-system that drives most of our culture does not WORK FOR THE PEOPLE. it works FOR PROFIT. it does not want to reward artists who speak directly to the people without profit as the ultimate end-game.

just you watch. these artists will find their own platforms and be funded by the people.

the revolution will not be televised.

the revolution will be fucking crowd-supported.

for the studio recording, which i did YESTERDAY (!!!!)….i drove over to applehead studios right here in woodstock. the engineer, christopher bittner, was a total pro and ran around setting up last-minute microphones…. 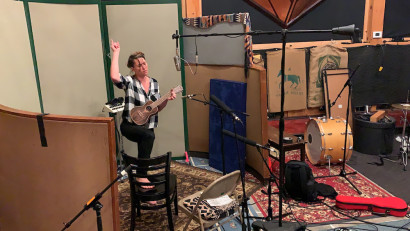 and, obviously, i needed a crowd to sing the PART.

i couldn’t just overdub myself. that would have been….wrong

so i put out a call to the patreon for crowd-singers.

here they are….(a few people had to jet, so not all are pictured) 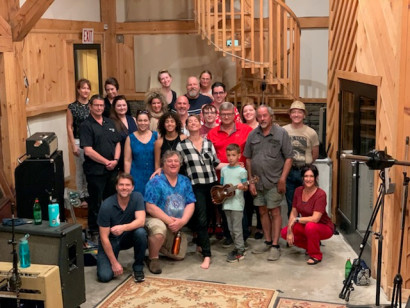 thank you frrom the bottom of my heart to everyone who came so far to do this.

the studio/mix and mastering engineer for the bandcamp recording was christopher bittner.

here are the lyrics.

thank you for supporting my work, my life, my staff, my everything.

p.s. a special thank you for this one goes out to nick, braxton and brittney, who busted ass FAST to get this one out. and an extra special thanks to michael mccomiskey, who not only donated HIS SON to the chorus, but sat by my side for the past 24 hours to make this fly.

and also…we had a special guest savior. i was just giving up hope that we could insert manuel’s artwork into the end of the video in time to get this out today, when michael pope HAPPENED TO STOP BY. you know your friends are your friends when they drop everything, let you make them coffee, and sit and slave over a quick video edit while you look anxiously on. pope: you’re one of my best friends, for so many reasons. thank you. 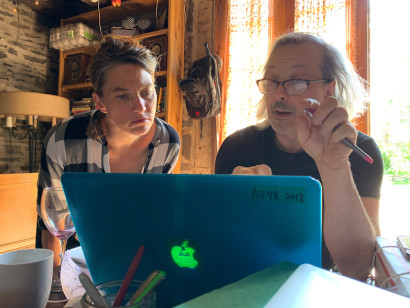 and here’s michael (mccomiskey,. my assistant) and michael (pope), savior video editor….slaving away at my incredibly messy desk… 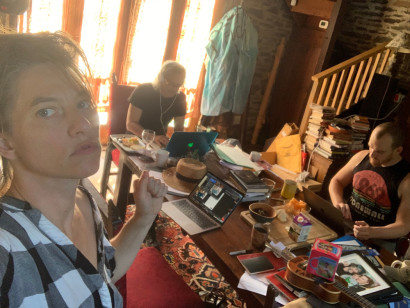 all tickets & info at http://amandapalmer.net/shows/