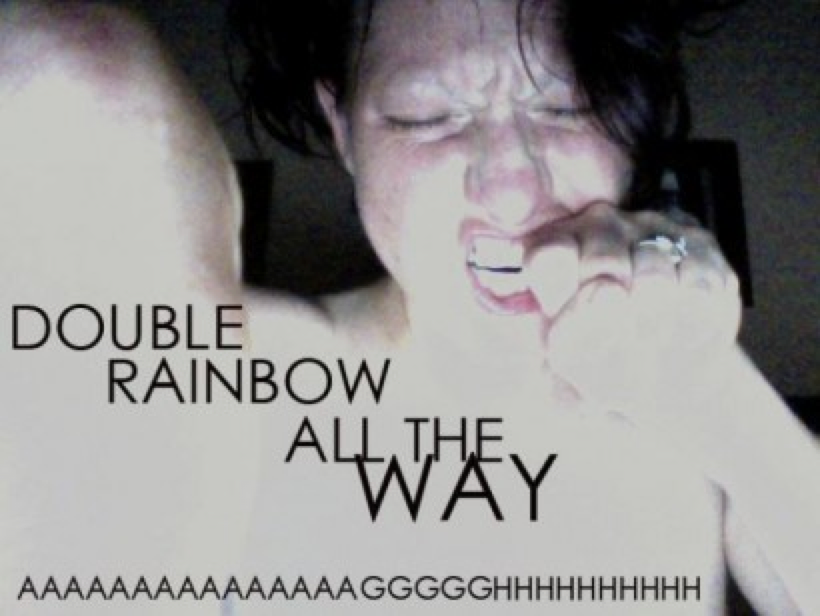 July 07, 2010
yeeeeeeeeeeeo
first of all, thank you so much for all the awesome feedback on the gagablog.
you all impress me so much – not just with your wit and intelligence and knowledge of postmodern blah blah critique rah rah ah, but with your willingness to share your stories with one another.
i’ve taken to responding within the blog comments now instead of cutting and pasting and saving for later blogs because….it’s faster and i actually DO IT, whereas the responses that i cut and paste tend to sit on my desktop in the drafts folders for… years. unsent.
i’m sweating my ass off and really enjoying it.
i am the lizard king.
i can do anytheeeeeeeeeeeeeng
ask anybody who knows me, especially the poor bastards who have to share long van and bus rides – i’m happiest at about 90 degrees with high humidity.
there’s a heat wave in boston (i think it hit 100 today) and i’m in HEAVEN.
everyone around me is moaning and groaning and i’m like: stay this way forever please thanks.
i’ve been trying to clean up my sty of an apartment and attack my overstuffed inbox with very moderate success on both fronts.
i’ve also been watching endless TED lectures and going to yoga religiously every fucking day.
i’ve also been keeping a meditation journal after my daily sit and i find it helps, especially noticing how my sleep patterns effect my ability to still myself.
less sleep, bad head.
and today, i watched the fucking DOUBLE RAINBOW ALL THE WAY youtube clip three times.
once when neil sent it, once when i had to go downstairs and show it to steven, and once again for good measure.
OH MY GOD i’t’s so awesome.
it also makes me miss drugs.
though i can’t say for sure whether mushrooms or acid were the culprit of this incredible few minuets of film (who knows, it’s totally possible the dude is just NATURALLY EMOTIONAL), it sure sounds a shitload like what me & my friends used to sound like when we were peaking and a double rainbow (or, possibly, just a cloud, or barring that, a human hand) came into our field of vision.
then
i made the rainbow man some fan art. 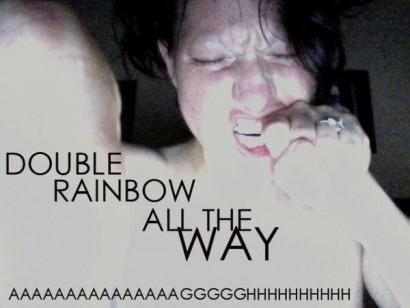 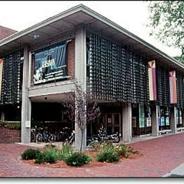 use THIS link on the box if you’re coming and want to meet up with fellow comrades, share rides, get local advice, etc etc

first come first served, but the place is huge and i’m doing this on wicked short notice so i think everyone’ll get in fine and if it’s packed people can grab floor space.
i’ll play ukulele, rap about life, take questions, and generally hang out until about 5:15 when they have to completely kick us out because they have a musical to put on that night.
i might even convince them to let me play the upright piano they have in the hall.
i’ll sign after, so bring things.
also bring love.
we’ll open the theater up at about 3:50 to let folks in.
spread word!!! text friends!!!! email this news to your boston comrades!!!
if you’re from far away, may i suggest eating at either café pamplona or café algiers (aka “the algeirs coffee house” to some) before or after. both are walkable (algiers is RIGHT down the street, like a block, pamplona’s a little further).
for drinks, hit charlie’s kitchen (their jukebox SLAYYYYYS, and they have chimay).
see you at the show…
love,
AFP
p.s. new mailer going out within the next day or so with some important stuffs you’ll wanna know. if you ain’t on it, fix yourself up HERE. and if you are, stay tuned. OH, actually, if you ARE already, do us a HUGE favor and make sure you have entered info in for us to know where you live (like, city/state)…just go to the e-mail signup and input the address you’re subscribed as, and it’ll bring you to a page where you can input more about yourself. that way when i come blazing through your town i can hopefully give you a direct heads up and not just a mass-mailing via the worldwide list.
Back to Blog
« Previous Post
Next Post »