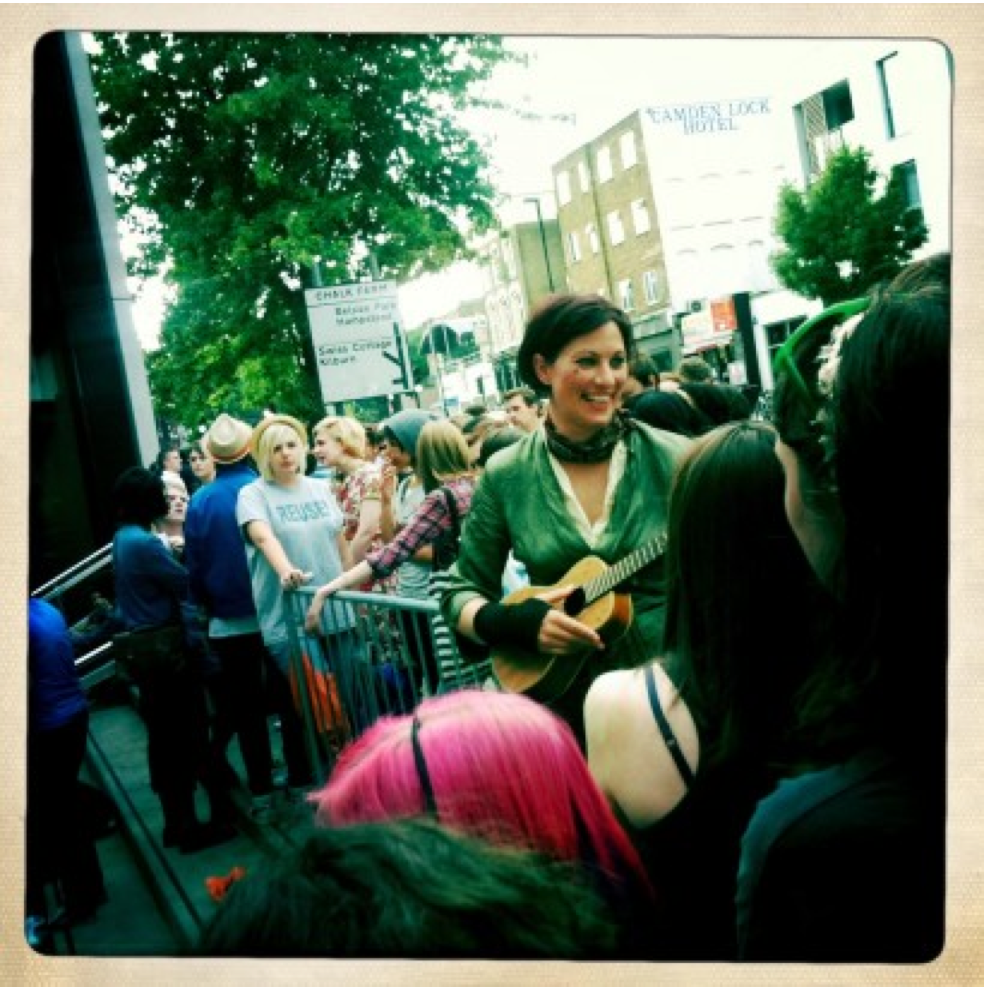 chocolate is worth its weight in gold

i’m writing this blog from inside a barn in upstate new york…..i’m up here doing something totally foreign, which is good for me.

the creative team for the musical this fall (cabaret, cabaret, cabaret) got a fancy grant from some folks up here who decided it would be a good idea to give their dollars and spaces to theater people.

they run the place for the whole month of june and have given the grant to something like 30 theater groups and 900 artists who all share rehearsal, writing and general hang-out development space for their projects. there are a handful of playwrights working on new material, some folks working on new plays, and a bunch of college students interning to soak up the buzz. so far, i’ve had a dozen or so incredible conversations and we’ve made few breakthroughs with the script. it’s so incredibly useful to collide with the whole team [the team is me, lance (the music director), steven mitchell wright (the movement master/choreographer), of course steven bogart (genius director), and jessica green (the dramaturg)], instead of just starting rehearsals without spending time to truly mull over the script of the show. we’ve been going deep into both the text and the score, and bouncing our ideas off each other in this little town deep in the woods. we’re using the local movie theater for play-space.

we’re high up in the mountains and the air is thick as molasses and it gets cold at night and tomorrow we do yoga at daybreak. and yes, they were serious about the wine sponsorship. they have TWO HUNDRED CASES OF WINE…. why am i blogging while everyone is out on the lawn playing “never have i ever”? i do not know.

i’m feeling behind but not as behind as usual, and i’m really happy that i’m actually making art all day.

i still have no idea what i’m doing with my life.

this is fine, as usual, and becomes finer.

i spent wednesday and thursday in london.

i couldn’t tell you before but i can tell you now.
neil gaiman, international fancy man of extreme fanciness, won the carnegie medal, which is the biggest thing you can win for being an author of children’s books in the UK.
huge. we went to the ceremony together with a lot of other people in neil’s life and family. it was wonderful and i was so so so fucking proud of him.

here’s neil with his medal: 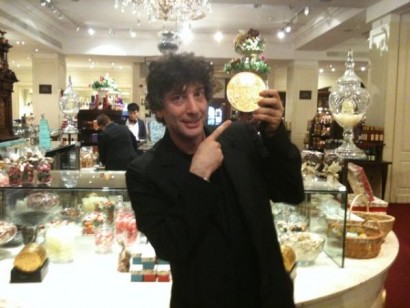 just kidding. that is a piece of chocolate, not the carnegie medal.

while in london. i also did a few things i was proud of.

fact: twitter has changed my life and the way i think when i travel.

because i couldn’t stand the thought of being in london (even for 46 hours) and NOT DOING SOMETHING, i decided to do a ninja gig on a few hours notice in front of tegan and sara’s show at the roundhouse in camdentown. i couldn’t resist. i should point at that i only knew tegan and sara were playing in london because someone twittered to ask me if i was going.

i announced that i’d do it about 3 hours before the fact. there was a long line for their show, and i set up right in front of the grand entrance (the people at the roundhouse grumbled but finally let me do my thing and even supplied an extra barrier to keep the crowd controlled) and it was a great convergence of weirdless. i managed to convince a handful of people to actually stay and buy tickets to see t&s. i was happy about that.

about 100+ people showed up on about 3 hours notice. 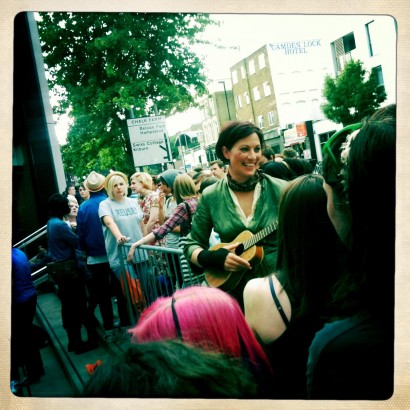 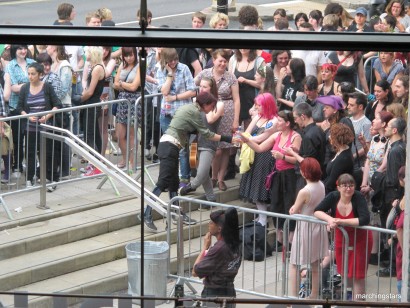 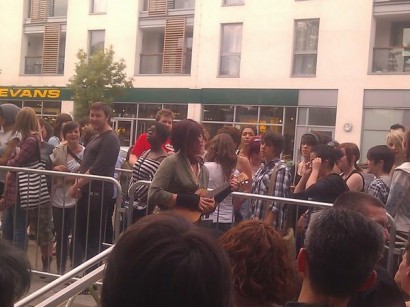 …and tegan’s girlfriend linsdey came out, took video footage of the ninja madness, and went backstage to show t&s in almost realtime. they loved it. i brought neil to meet them, and we watched their show. neil left early because he’d been signing all day and his brain was about to shut down completely. i stayed, and i left the VIP area because the sound was shite up there (sorry the roundhouse, but it’s true), squaggled through the thick of the crowd  and watched the girls play from the middle of the floor. it was surreal, standing there among the fans, remembering that brian and i had shot our second live DVD in that very space 4 years ago (or however long ago it was). i feel like this is a good thing to do, and i don’t do it enough. it made me feel so much more familiar with their music and their scene, to hear a bunch of londoners screaming their favorite songs at the tops of their lungs (and now i know what their hits are, since i’ve only been acquainted with their music through listening in the privacy of my own mind).
i love them and i love their music, i do i do.

and yes i twittered pictures from the show with commentary.

my favorite pictures from the gig… 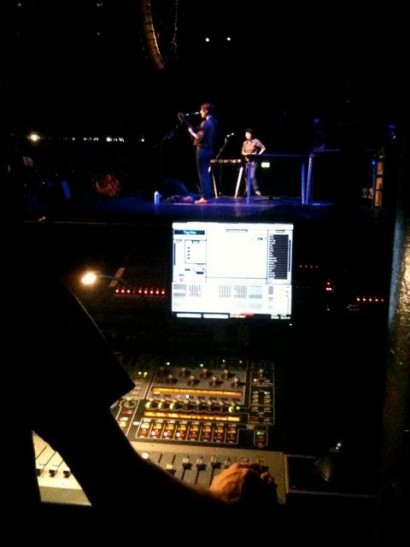 i love monitor hands.
ready for anything…. 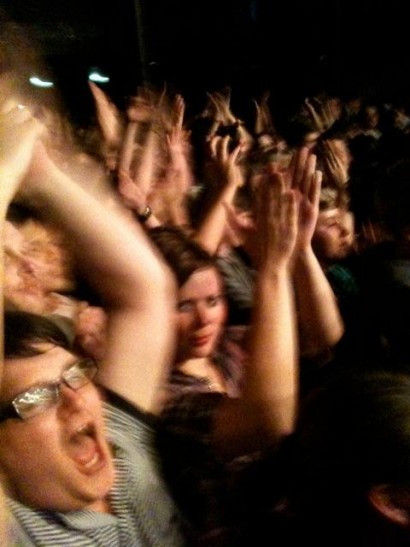 robin stevenson made this amazing AFP jack-in-thebox and gifted it to neil outside the ninja gig….. 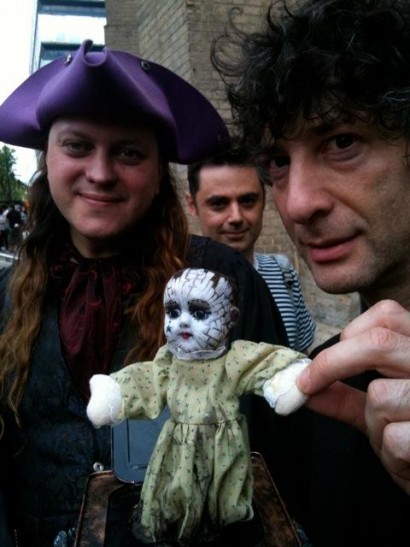 here is another thing i did.

for winning his huge prize, neil was given a huge bouquet of flowers that showed up at our hotel from DC comics.
then he left for the airport and i was there all alone, not leaving for another 3 hours.

so i twittered to the people of london that i had a surprise for them, and gave a meeting spot (seven dials, in soho) for 30 minutes later.
here’s who showed up to take the flowers: 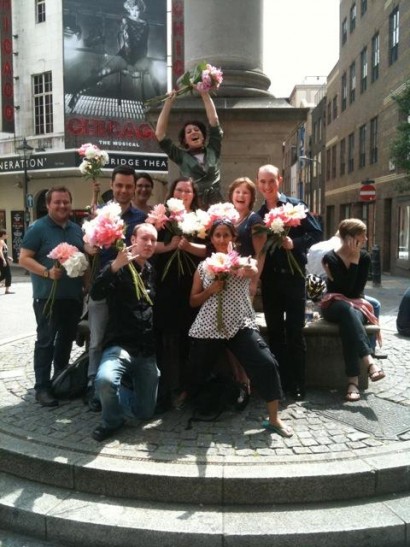 and it was quite awesome.

and we love the woman on the right, who has no idea who i am/what the fuck we’re doing.

yes, bob, we are a niche society.

one of the funnest things of the day was watching people twitter in pictures of where their flowers wound up.

the STEEL TRAIN COVER SONG i did 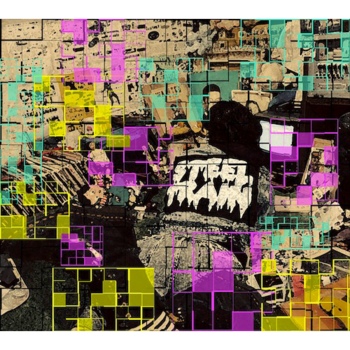 the boys of steel train asked me to do a cover for their new project (and album of covers songs OF songs from their new album…it’s called “terrible thrills volume 1”, very fucking clever)…and i did. all ladies, too. velly sexy.
you can find it right now alongside covers by tegan and sara, holly miranda, scarlett johansson, and more ladies. it’s great to see yet another band off their fucking label and doing things their own way.
lots of you watched me wanking in the studio at partyontheinternet.com for a whole day in chicago to make the song.
i chose the track “behavior”…it features a little girl and a larger boy (@matdevineslife from kill hannah) and a lot of reverb and piano. gotta say, i like it.

ALSO:
* for those of you who want my cover, it comes along with all the others as a bonus digital-release when you buy the album….that be HERE.
* for those of you who’re sticklers for quality, hang tight, i’ve gotten permission to put it up for sale at music.amandapalmer.net in about a week, where you’ll be able to get it in FLAC, 320 & v0 MP3, and all sorts of other geeky ways. i’ll blog more about it when it’s ready, and show you some pictures from the studio and such.

my friends in bitter ruin, the very duo/band from brighton who saved my ass during the ASHCLOUD fiasco, are COMING TO AMERICA in september/october and are looking for tour spots near the east coast of the states.
if you can help them out with a place to play, EMAIL THEM: band@bitterruin.com

ain’t gotten a taste of their music, yet? click their logo above to visit bitterruin.com

SAVE THE FUCKING DATE

halloween 2010.
if you live in the eastern part of america, or fucking anywhere for that matter, save the fucking date.

p.s. nekkid in london. i’m digging my hipstamatic app to no end: 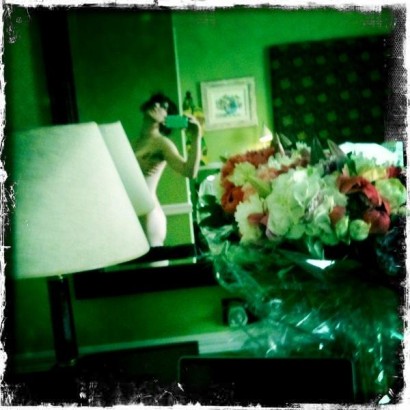 a months worth less

my open letter to the daily mail