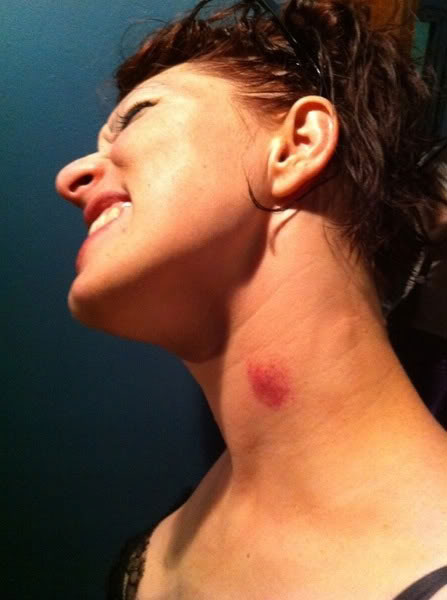 anatomy of a hickey

the continental australian tour has come to a close….brisbane, melbourne, sydney, adelaide, and perth have ALL BEEN KILLED DEAD BY THE DRESDEN DOLLS.
the band is in the best shape we’ve ever been in. every city has been reduced to rubble by the drum power of brian viglione. 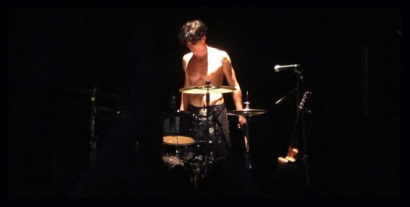 right now we’re holed up in perth, enjoying the 90-degree heat and dipping our toes in the beautiful shark-infested waters.

last night we went to see PJ harvey at the perth concert hall and the grand dame was in fine, if not slightly subdued, form. we’re about to head out to a PERTH NINJA GIG, taking place on the fremantle esplanade. by the time this blog posts…we’ll be done with it. so if you missed it, it’s because you’re not following the twitter goddammit. we’re planning on playing ukulele, guitar, and soccer.

there’s some AMAZING HISTORIC shit gonna go down when we get to tasmania. i can’t tell you exactly what, but i can tell you this:
if you were on the fence about flying from melbourne/coming to/getting a ticket (they’re only $25) for the MONA festival in hobart, tasmania: DO NOT HESITATE.
the dolls play thursday and there’s some hijinks planned for friday night that are off. the. fucking. charts.
then stay saturday to see PJ Harvey and TuneYards. and your life shall be complete. go HERE and click “download the program” to see the whole MONA schedule…
ALSO: they are doing a giveaway for tickets/to meet us, on facebook. RSVP and get info HERE (it’s REALLY easy to enter)…

tasmania and new zealand: we’re coming for you next. we have SHIT TONS OF PLANS to be EVERYWHERE in tasmania so follow the twitter for a blow by blow (also follow @AFPwire & @DresdenDolls, while you’re at it).

and in the planned-out NINJA GIG department….i know, i know, i’m getting too organized:

we’re getting set for auckland and christchurch….
AUCKLAND: 2 pm, day of show (jan 27th), we’re hoping to hit up the AUCKLAND LIBRARY. details in the twitter feed to come.
CHRISTCHURCH: the afternoon before the show (the 24th….show’s the 25th) we’re scouting a few joints. stay tuned and keep the afternoon free!
WELLINGTON: stay tuned. not sure if we’re going to ninja your asses but we MIGHT.
tickets for the actual gigs are NOT sold out, we’re playing GIANT-ASS venues. help spread the link and get tickets if you’ve been putting it off: HERE.

and now, i’ll give you a blow-by-blow of my recent hickey.

i’ve been venturing out into the audience/balcony lately during the encore, usually trying to take some unsuspecting folk by storm.
i often sit on people’s laps, grab people’s faces, kiss random strangers, and more or less molest the audience at my discretion.
here’s a photo of me in the audience in sydney, by nick b. photography: 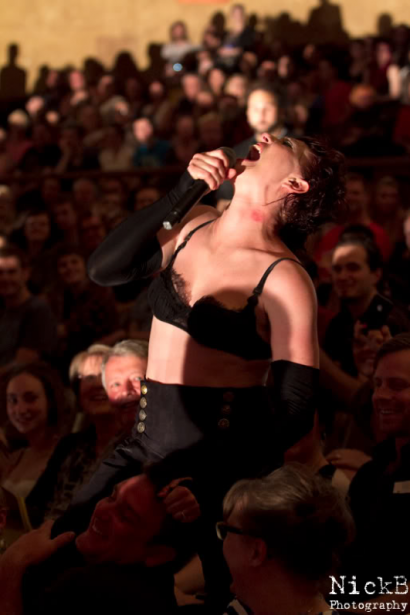 that night, lo, the tables were turned. a very drunk chick tailed me, attached to my neck like a succubus, and literally would not let go.
you know that feeling you get when you know you’re going to have a very dark hickey the next day? i had that feeling.
happily (?) the entire night was WEBCAST in fucking fantstic quality. so if you feel like watching the succubus, or the whole show for that matter, YOU CAN, HERE.
it totally reminded me of one of my favorite shel silverstein poems, “the yipiyuk”: 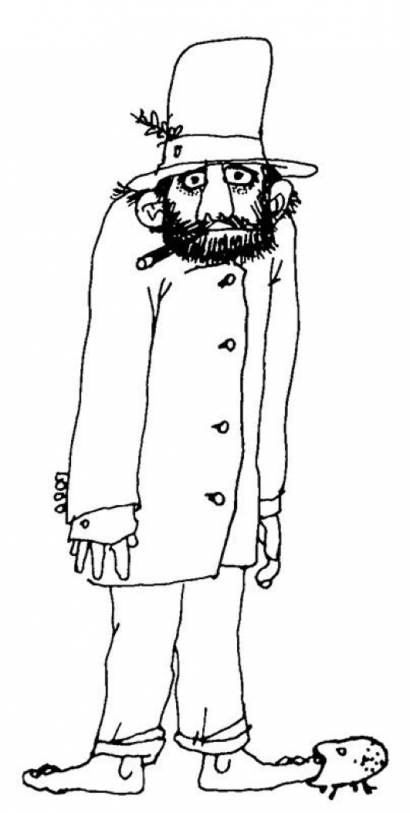 eventually, she did let go.
jaron, my immaculate sound guy and sometimes security-savior (@jaronsound on twitter) managed to pry her off my neck, and claims he had to use pressure points to her sides to get her to detach.

here is the hickey, post-show, in its fresh red state: 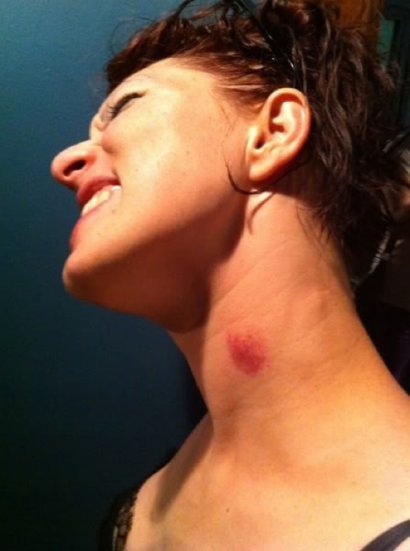 i have to admit, i was kind of proud of it. like the way i’m happy to be sore after a yoga class, or hungover after an unparalleled night of partying, or faced with a callous on my finger after a long day of ukulele-playing.

i considered this hickey a very bizarre badge of honor.

after people saw the footage of the succubus vs. amanda, a lot of people tweeted at me, expressing shock that i was so non-chalant.
if you look at the footage, you’ll notice that my actual tactic is not to MAKE HER STOP, but to MOVE HER FURTHER DOWN MY BODY to give me a more stomach-centric hickey which would have served three purposes: 1) stomach hickeys feel better 2) they are also less visible come morning and 3) she was BLOCKING me, goddammit. i thought it would be wonderful to give the audience a wonderful hickey-show but for fuck’s sake not if you can’t see my face ME ME ME ME ME ME and so forth. i found myself, for the second time in a week, unconsciously channeling meow meow and saying “you’re blocking, darling, you’re BLOCKING.”

as jaron said, the smell of alcohol was fierce. girlfriend was PLASTERED.

that’s always disappointing. when someone attacks you like that and doesn’t really want to collaborate because they’re so far gone, it just stops being fun.

i’m always very lax about security. it’s something i’ve learned to really love and appreciate about the dresden dolls/AFP crowd in general: i trust everybody to an almost masochistic degree.
but i love doing that. i love crowdsurfing, literally and figuratively, into the arms of people i don’t know. i love the the feeling of being held aloft and looked after by a collective of people who are connected in that moment only through you and your choice to take the fucking plunge. sometimes, late at night, i crowdsurf on twitter. it gives me the same feeling.

here is the hickey the next morning, fading to a nice purple: 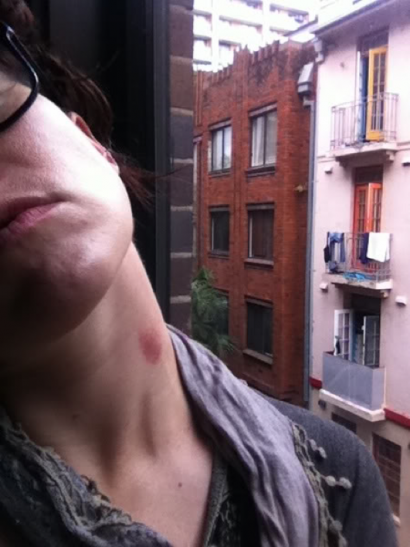 it’s been over a week now, and the hickey is now gone: 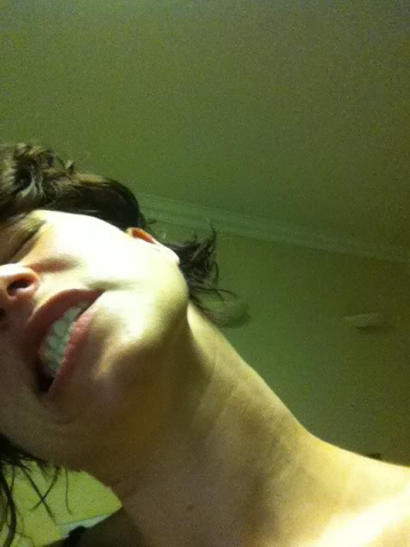 this is not an invitation to randomly attack my neck like a blood-thirsty yipiyuk without asking.
if you do, i might zen-karate-chop you.
but ask first, and i’ll probably say yes just to reward your bravery.

and here’s a couple of amazing tour shots….this tour has been fucking epic.

from our ninja gig for occupy melbourne (via pulloutmyinsides on instagram…YOU CAN SEE THE HICKEY, EVEN FROM 15 FEET AWAY): 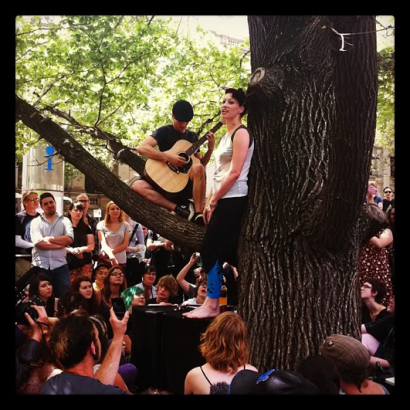 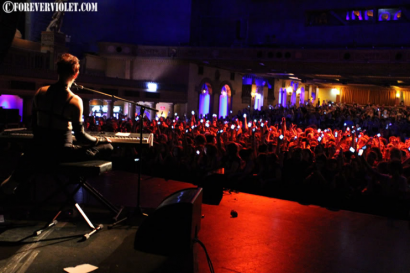 beautiful beautiful shot of the band taking stage at the enmore: 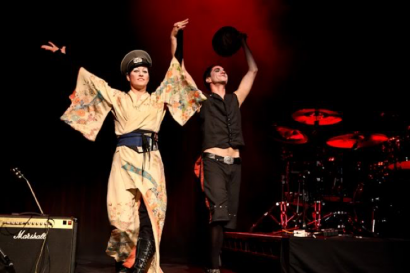 ….and thank you to everyone who’s come so far.

we love you so much.

UTRECHT: due to my arrest in amsterdam…