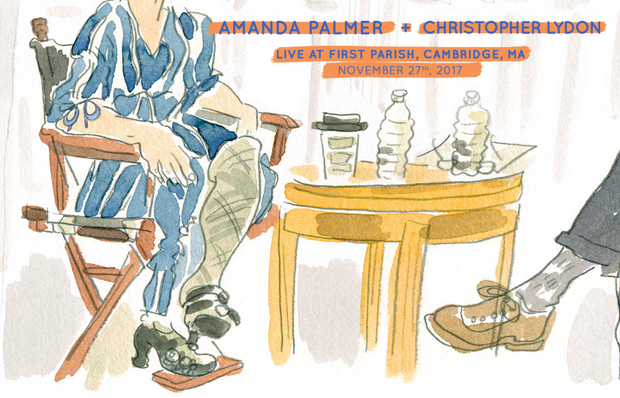 i’m in new orleans, recovering from a long, weird, hard holiday season (more on that soon, i’m still in space) and getting ready for our company move to south africa.

while i’m here i’ve made myself typically over-busy i’ve got one surprise video to make on saturday (you are going to love it, and i may need some local help/actors so STAY TUNED), i’ve just squeezed in two super-fast recording sessions (one involving ani difranco, about which i am thrilled, and one that i just thought up yesterday in response to some world news)…and i’ve one show to do (with jason and a few surprise guests, at tipitina’s, on sunday the 21st).

i am, as they say, keeping myself busy. i’m not even sure what’s happening anymore, frankly. but i do know this: this patreon is saving my life. i’m not sure where it’s about to take me but i know that it is somewhere better.

i also know i want to write more long-form things…i have too many interconnected thoughts, reflections and stories in my head and they need to get out. i’m trying to figure out how to make that work with the patreon, and i’m going to be asking you for guidance and permission (well, you know, amanda-palmer-style permission, where mostly i ask if you’re going to follow me into the stratosphere of new art rules). stay tuned for that, too.

to the point of This Thing.

This Thing is a really beautiful Thing, and a Thing that i’m hoping to do more of. if you’ve been on the patreon for a while, you’ll remember that i tried my hand at doing a podcast/interview with the australian singer-songwriter missy higgins when i was in melbourne about a year ago. it went OK, but i wasn’t thrilled with the results…it wasn’t particularly well-produced (some of the audio was annoying) and the conversation tended to wander a little. the live music that missy and i played was beautiful, but the recording didn’t quite capture it, and i found myself a little dismayed. it was still totally Thingable, but i vowed to get my game up for future interview-podcasts, and i think the quality of this one kicks that one’s ass.

as for my partner in crime, christopher lydon – for those of you who aren’t familiar with him – is a long-standing radio interviewer (mostly found on National Public Radio in the states) and he’s an old hero of mine.

when the dresden dolls were still tiny and local to boston, and i was still regularly performing as a statue in harvard square, i wrote a sort of joke-y love song for him, and that song “christopher lydon“, wound up on the dresden dolls very first album, “a is for accident“ (which is free/pay-what-you-want on bandcamp).

i wrote him a fan letter back then (i’d forgotten about that, and he KEPT it and reads it in the course of this interview) and we developed a sweet kind of friendship over the past 15 years.

he was my #1 pick for an interview to continue this series…which i hope will keep evolving. i hope not just to be interviewed, but to interview, and to find really awesome, unexpected, strange, honest, deeply authentic people to converse with me as the Things Go On….so please, if you have any ideas, let me know. working on a realer podcast is on the top of my list of things to do lately…and i’m especially excited to use the podcast itself to inspire my own songwriting, and to wrap these things together in one delicious Thing-Package.

$3 patrons: your download will be in your inbox in a moment.

i’d also love to read your comments, thoughts, feedback about the content (and if you want, the quality) of the podcast. talk to me. i’m reading.

it was recorded live at the First Parish Church in cambridge, MA, on november 27th, mere steps from where i used to stand as the eight foot bride my street performance character. there’s a few live piano & ukulele songs (“in my mind”, “christopher lydon” and “the ride”).

these are lovely live-art drawings done my open source’s resident artist, susan coyne…you can see more of her art at coyneworks.com 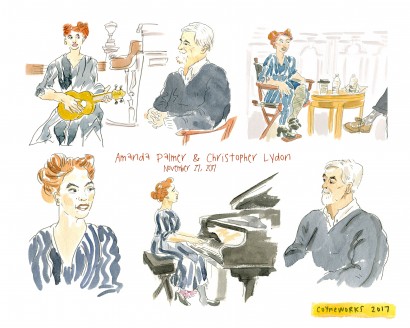 one apology: the piano is ever-so-slightly out of tune.

we’d originally hired a kurzweill keyboard for the gig, but when i got to the church and saw they had a beautiful grand piano off to the side, i wanted. so even though it was slightly out of tune, i opted to play it instead of the keyboard, because…it was better.

one last plug, if you enjoy this (and i imagine you will), and you want to support christopher’s OWN patreon – the open source patreon – please do.

if you’re into podcast-listening, they are making really, really thoughtful and important deep-dive podcasts and christopher is one of the best interviewers, discussers and thinkers about there. they are relying more and more on indie funding and i know even a few dozen new patrons would rock their world and make a difference. their team is just fantastic and it was really wonderful working with them…they deserve the patronage big time.

go support them if you can: