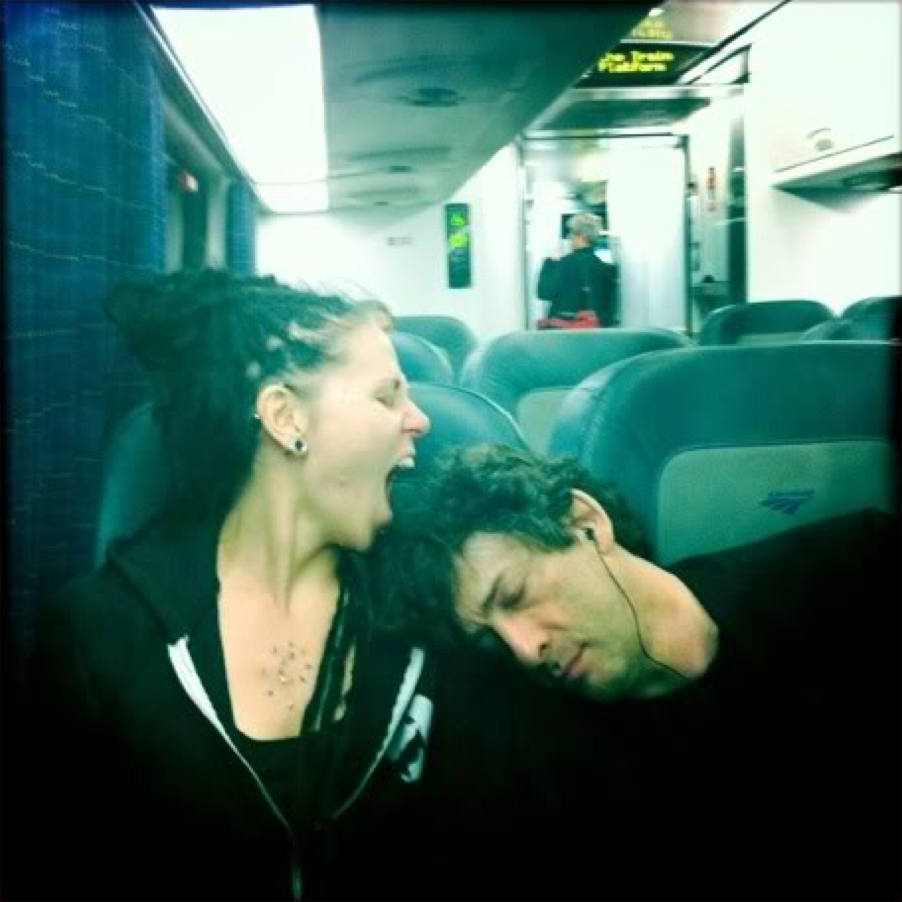 today neil and i went to see laurie anderson.
it reminded me that i’ve never fully blogged about my love for her. so i’ll work on that.

meanwhile, the best part of her show was coming out of the theater and walking into the park to see an entirely different kind of theater happening.

there was a full-blown anti-abortion rally happening. here are some pictures…. 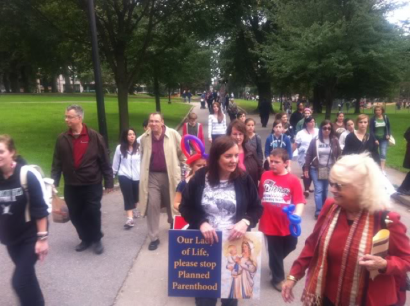 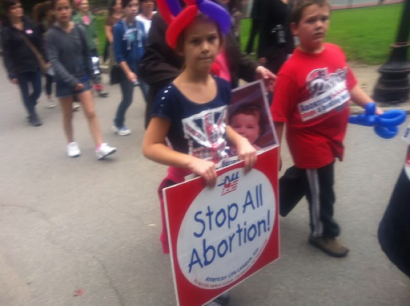 but THIS one takes the cake: 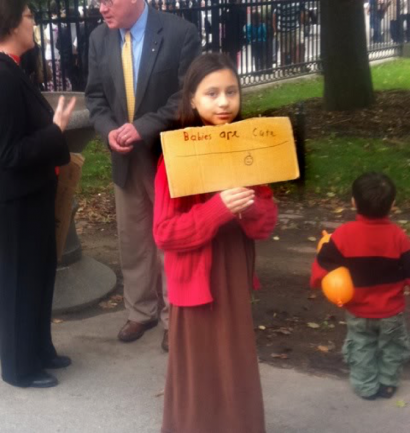 i have no words.

i don’t know where the conversation goes from there.

mostly i’m imagining the scenario in which that cardboard sign was created.

did her mother sit her down and TELL her to write that?

or was it her idea?

so i went home, lay around depressed for a while, and then got the clever idea of twitter-polling people for things they’d forgotten about from their childhood bedrooms using the hashtag #LostThenFound.
i got a few hundred responses instantly.

@AndreMephisto my green window pane and the view out of it. god i’ve forgotten about that but i miss it like hell #LostThenFound

@Wyld Heh, we couldn’t afford Hungry Hungry Hippos, so my brother and I created our own with marbles and plastic cups #LostThenFound

@RemarkableQ My arched wicker bookshelf that held all my Enid Blyton and Roald Dahl books. #LostThenFound

@JonasSamuelle The blue table where i wrote my first story. #LostThenFound

doing that cheered me up.

the new Evelyn Evelyn video – for “have you seen my sister, evelyn?” – is up, and it’s BEAUTIFUL.
feast your eyes; it uses an animation technique never seen before, and color me….fucking impressed.
it was directed by Hoku Uchiyama and a whole bunch of amazing other folks (take a second to read the credits, every single one of those people deserves some praise).

(and if you missed the memo, the new evelyn evelyn graphic novel – two volumes of hardbound goodness painstakingly drawn by Cyntia von Buhler – has officially hit the stands. 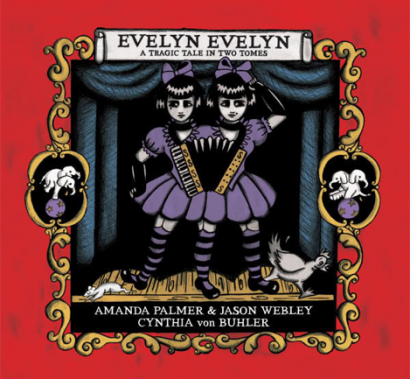 it’s been printed by the good people of Dark Horse Comics, and if you want it online, get it HERE or one of the other fine retailers listed HERE. or you can wander into your local indie comic shop and see if they have it…or demand it if they don’t. use the comic shop locator HERE to find out where your closest store is.)

on friday night i acted in a resurrected “where’s jennifer”, a very bizarre performance art piece i wrote years ago, with a handful of actor volunteers:
E. Stephen Frederick, Karin Webb, Cler Davies, Porcelain Dayla, Margaret Loscuito, Samantha Bryan and the ever-amazing Katrina Galore.
i’m still waiting for a full-cast photo, but here are my two favorites, from backstage: 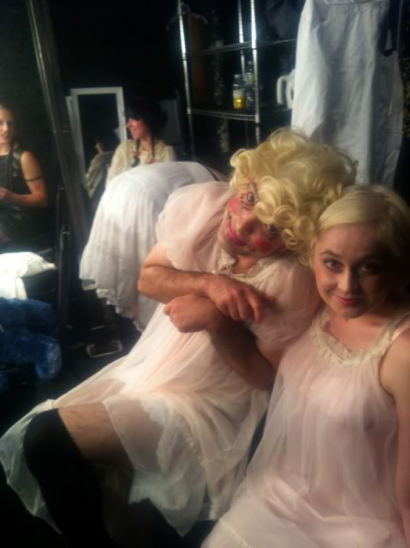 karin is holding a tumbler of whiskey. her caption for this one was “you, ok, mom? i learned it from watching YOU.”: 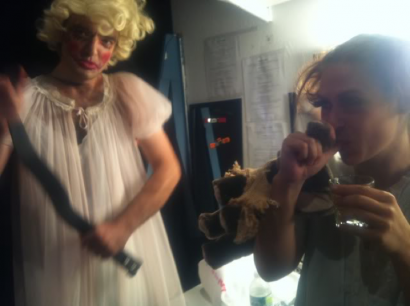 and here’s some photos from the rest of the night….which was a beautifully curated variety show on the theme of “Asylum” put together by my housemate Mali, starring her band Jaggery. my old friends carla kihlstedt and mathias from sleepytime gorilla museum were there in their new guise (a duo called “hello dust”)….
they were as impressive as usual. google them up, they’ve relocated from the bay area to cape cod, where they’re gettin mighty domesticated and raisin’ a youngun’. 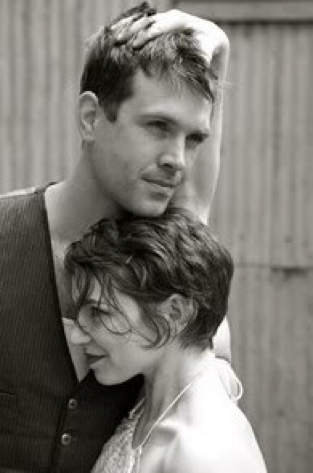 some photos of the evening….Michael Pope riffing stories of his past while body-painting Sarah Patterson: 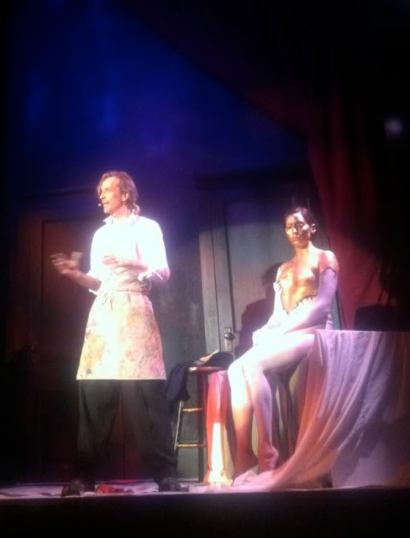 “and then i saw it….i saw it like a flash of light in the back of my mind…the answer to EVERYTHING…. 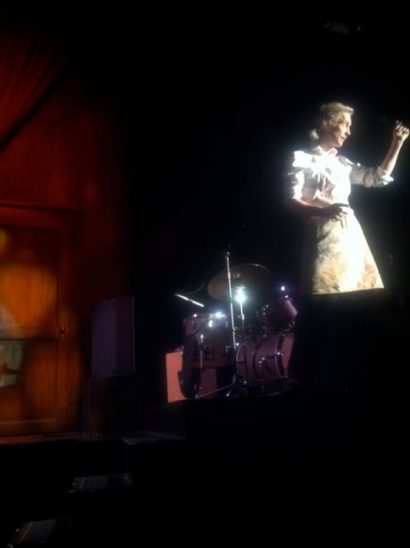 “unamerika’s sweetheart” Karin Webb, at the end of her piece: 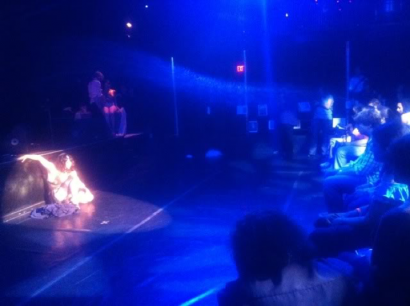 live painting by a girl whose name i don’t know in the darky darkness: 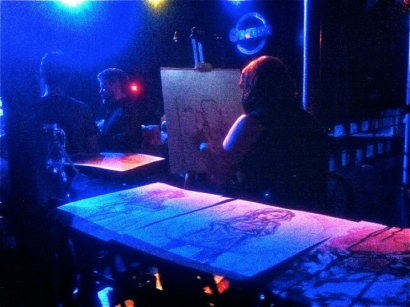 and a news flash / public service announcement….superkate is looking for a new place to live.

if you don’t know who she is, she’s my assistant, a fellow theater geek, a kick-ass bellydancer, and a generally awesome and very fucking trustworthy human being.

she will not hurt you with a sword, probably…. 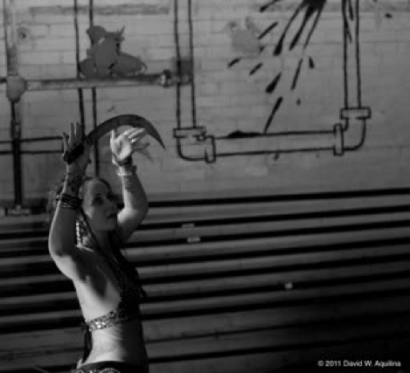 or eat your head on a train while you are sleeping….probably… 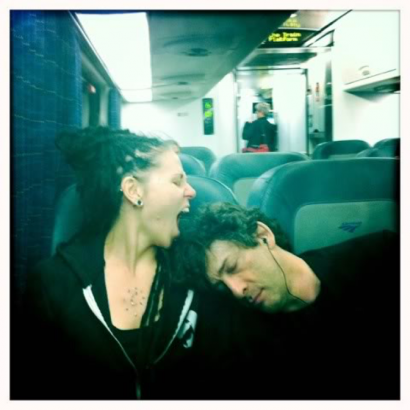 but i cannot TOTALLY guarantee these things.

what i can guarantee:
if you’ve got a situation for her, she’s huntin’.
she’d been living in lexington, kentucky, until several months ago and has since been gypsying around new york.
she’s looking for a cheap roommate situation in NYC (or anybody in NYC with an upcoming-ly available 3-bedroom she can share with a friend of hers who needs two rooms to himself.)

if anybody has an amazing (weird? try her) situation in LA or chicago, or san fransisco (or honestly, ANYWHERE TEMPTING…because i doubt she’ll thumb her nose at an opportunity to house-sit your 54-acre ranch complete with reconstructed bavarian castle and ice-skating rink for a year or two…even if it’s in buffalo or des moines) hit her UP.
use the email lodging@amandapalmer.net for this one, she’ll be checking it frequently.