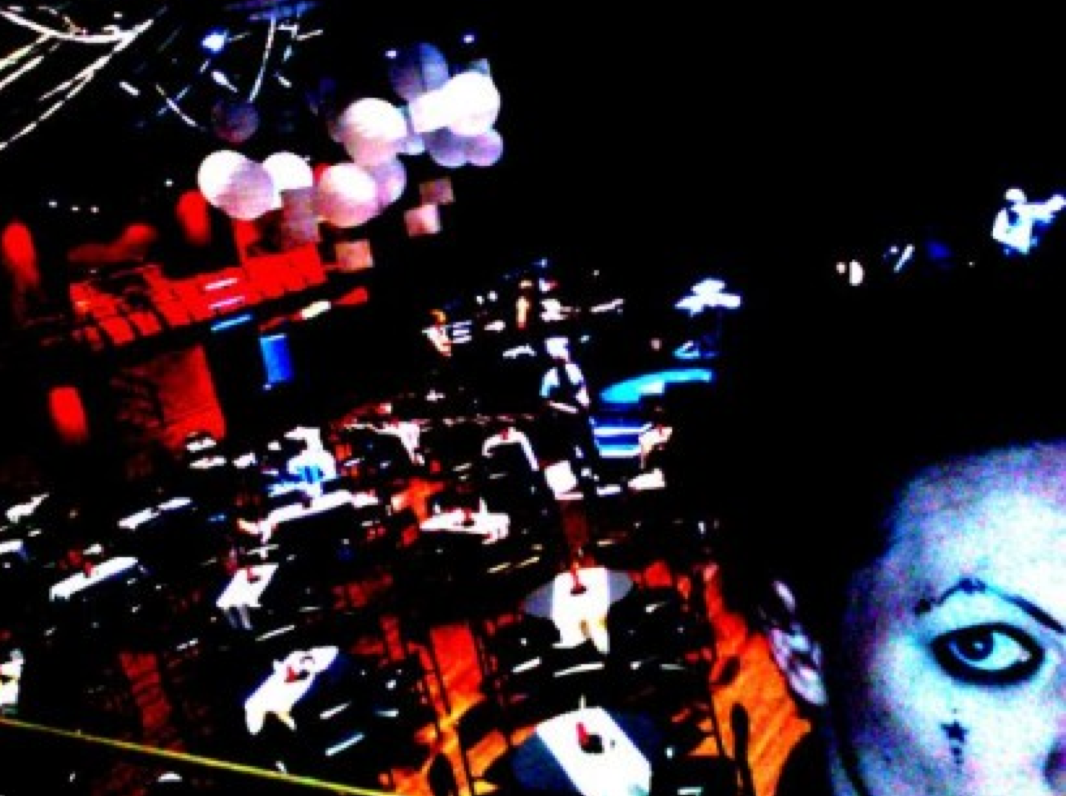 night one at sydney opera house was incredible….
right now sitting back at the space getting ready for day two & my good friend lance horne turns out to be the pianist for the show before mine tonight.
he’s playing piano for justin bond, ex kiki & herb
justin is gorgeous & we ate some fish together, i’m going to get to see his show tonight…all karen carpenter covers, god help us 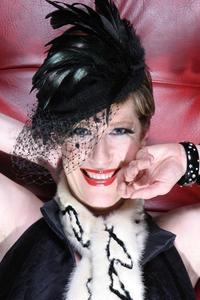 lance was the accompanist for meow meow, who a lot of you saw tour with the dolls two years ago…..
& you may remember him from the wonderful four-handed-mandy-goes-to-med-school at sxip’s hour of charm last year: 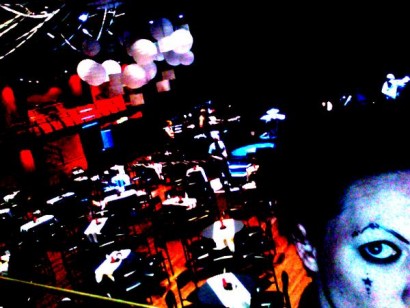 so there he is behind me, blurry little lance at the massive piano, practicing….and you can get a little sense of the space…worklights are on so it’s not as pretty as at night when it’s all decked out and lit up….but i decided to play with it in photoshop and make it look arty…

life is beautiful. i love it here so much. i want australia all the time.
everyone here is amped about mardi gras (its the biggest gayest mardi gras celebration in the world) and i am forced to remember hourly why i want to move here.
people are not unhealthy, mean and unhappy. they are, generally, just nicer. you get used to mean people in america.

will post footage as it surfaces. “exit music” was a highlight.
jetlag has abated. two more shows here and then out onto tour the big country.

i just went to the sydney opera house canteen and there are girls all painted gray, who must be performing in the main opera house theater.
i tried to take a covert photo. 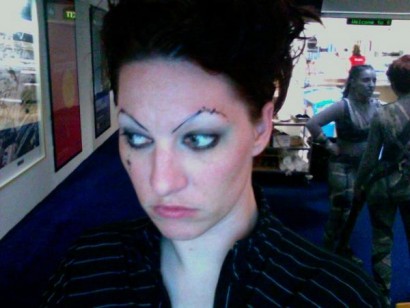 i was just having a fascinating conversation with zoe and jaron (our sound guy) about music and the brain….
zoe and i were discussing how we don’t listen to music very much. it takes up room in our brian that we don’t have, especially since our own music needs a place to live.
zoe said that imogen heap (who she plays with) is the same way, and so are a lot of other musicians she knows. we just stop listening.
and everybody expects to be expert music listeners. but i feel like the opposite it true, the more music i make, the less i listen.

i used to listen to music so fucking much. as a teenager i lived with a walkman on. now i’ve stopped.

and when i’m home, i have days of silence and then if i’m feeling ambitious i put something VERY easy to listen to on repeat. and i listen to that CD for days, sometimes weeks.
this last time i was home it was “bande y part” by nouvelle vague. and then occasionally i’d throw on a gary numan CD. but mostly silence.

and it occurred to me a few days ago that our overexposure to SO MUCH MUSIC and SO MANY SONGS is a really recent phenomenon.
it used to be just fine and normal to only know….100 songs. in your LIFE. maybe. max. you lived in a village.

church songs. beat-your-skin-drum-around-the-fire-after-the-hunt songs. and they were all repeated over and over.
and that was fine.
it wasn’t like the village elders flogged the village songwriter to write a new song every day so that the post-hunt villagers didn’t get bored.
no way – the whole point is that you sing the SAME songs as the goat/mastadon/whatever spins there on the spit, and everyone is happy.
everybody KNOWS the song, everybody KNOWS the dance. they’d think we were fucking crazy for changing songs every week.

so i feel less and less guilty.

zoe and i talked about how we’d be happy to live in a world where there are only 100 songs.

we talked about capitalism and how once music is a commodity, everything is fucked.
but how communist music was awful. hm. tough one…

then zoe and i talked about starting a non-profit called MUSICIANS FOR LESS MUSIC.
i think it would function more like a support group for guilty musicians who don’t tune into the radio or the current barrage of tunes.

we had all recently read “this is your brain on music”
(….recommended: by daniel levitin…amazing book

….and jaron was going on about how synapses and pathways in musicians brians are literally different than others. the way musicians hear and feel music is more extreme.
i don’t know where this was all going, but it made me happy to feel not alone and know that other people were having difficult relationships with music.
i was asked in an interview today what my relationship with the piano was like. i mostly feel indifferent about pianos. i feel like they’re tools.
i feel awful about that, sometimes. i feel like there all these “real” musicians out there…the tori amoses and the people who actually play real pianos and have real relationships with them.
i feel like pianos are disposable. sometimes i wish i could just play guitar, because it’s so much easier to carry around. i just don’t care, as long as it makes sound and it can be loud and it can make a song sound like a song.

somewhere in the conversation zoe brought up the experiment about joshua bell, the famous violinist, playing incognito in a subway as a busker to see what people would do.
i found the text below….its so good i just copied and pasted….. i used to think about this all the time when i was a street performer. about how art on a stage is different than art in the street.
how people’s minds change SO MUCH once they’ve bought a TICKET, once they walk into a museum and change their brains around to think: “ok, now it’s time to look at ART.”

art is not special, art IS always, art is everywhere, we should always be in a museum, the world is a museum, the world is a stage, the graffiti is a masterpiece the buskers on the street are more legit than the opera singers, especially if the opera singers are dicks and just phoning it in…this is how we have to see the world.
i used to think that being a street performer (i was a living statue for five years….i should really write a book about it) was the ultimate act of art, because NOBODY would ever recognize my art in any way that was acceptable, nobody would ever applaud, no reviewers would ever come, no critics would ever ponder whether i had a good or bad performance…. and if anybody wanted to take anything away, if they were brave enough, they did. and nobody told them to, nobody told them what to feel, nobody told them anything. it just WAS. 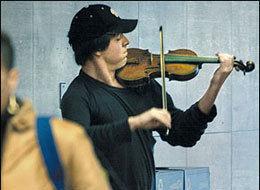 “A man sat at a metro station in Washington DC and started to play the violin; it was a cold January morning. He played six Bach pieces for about 45 minutes. During that time, since it was rush hour, it was calculated that thousands of people went through the station, most of them on their way to work.

Three minutes went by and a middle aged man noticed there was musician playing. He slowed his pace and stopped for a few seconds and then hurried up to meet his schedule.

A minute later, the violinist received his first dollar tip: a woman threw the money in the till and without stopping continued to walk.

A few minutes later, someone leaned against the wall to listen to him, but the man looked at his watch and started to walk again. Clearly he was late for work.

The one who paid the most attention was a 3 year old boy. His mother tagged him along, hurried but the kid stopped to look at the violinist. Finally the mother pushed hard and the child continued to walk turning his head all the time. This action was repeated by several other children. All the parents, without exception, forced them to move on.

In the 45 minutes the musician played, only 6 people stopped and stayed for a while. About 20 gave him money but continued to walk their normal pace. He collected $32. When he finished playing and silence took over, no one noticed it. No one applauded, nor was there any recognition.

No one knew this but the violinist was Joshua Bell, one of the best musicians in the world. He played one of the most intricate pieces ever written with a violin worth $3.5 million dollars.

Two days before his playing in the subway, Joshua Bell sold out at a theater in Boston and the seats average $100.

This is a real story. Joshua Bell playing incognito in the metro station was organized by the Washington Post as part of an social experiment about perception, taste and priorities of people. The outlines were: in a commonplace environment at an inappropriate hour: Do we perceive beauty? Do we stop to appreciate it? Do we recognize the talent in an unexpected context?

One of the possible conclusions from this experience could be:

If we do not have a moment to stop and listen to one of the best musicians in the world playing the best music ever written, how many other things are we missing?” 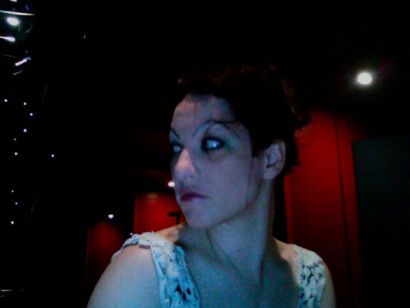 the amanda-tied-to-the-sydney-opera-house shoot is UP, go watch