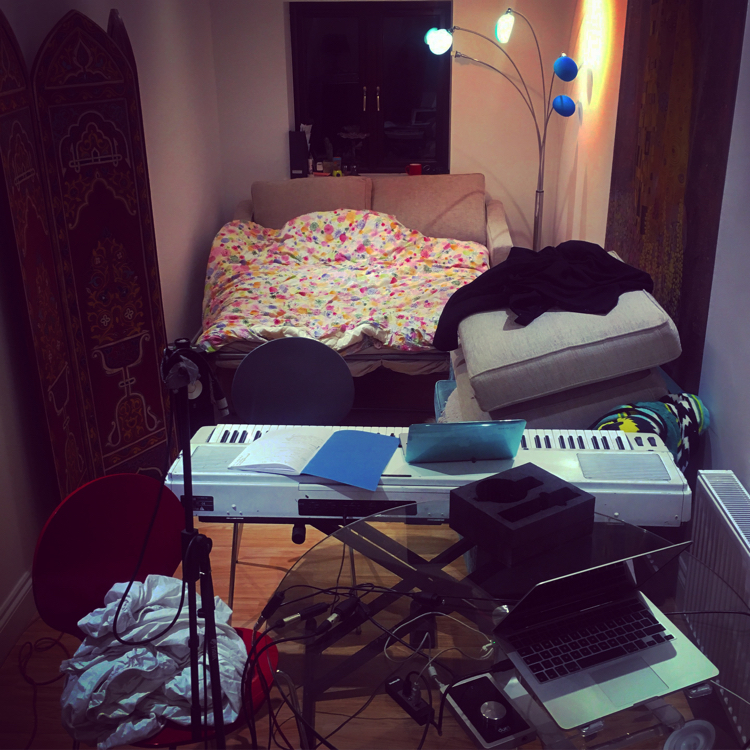 before I go any further….thank you for all your comments lately. I’ve been baby-buried and travel-weary and I haven’t taken a ton of time lately to answer as many as i’d like, but I’m reading everything. it heartens me always to see that everyone here is so insanely kind, and funny, and smart. it’s a huge breath of fresh air after wallowing in the murk of other internet comments and even facebook, where everyone is jumping down everyone else’s throats.

and to the new hundred or so people who’ve joined up this week – WELCOME TO THE PATREON.

it’s one year later. full circle – back in the same room with the same wonderful teenagehood-songwriter-hero Edward Ka-Spel to make a record I’ve dreamed of making for a decade. (if you read “the art of asking”, you get the significance).

little baby ash is with mr babydaddy neil in central London and I’m out in the sticks. it’s my second night without a baby since he was born and it feels strangely quiet, like I have a phantom baby under the quilt – I keep hearing him snorfle.

he has a cold. last night he cried himself silly with a blocked-up baby nose and neil and I took turns being sleepless. there is nothing as sexy as seeing a man take care of a baby with a cold by singing him ridiculous songs in the middle of the night.

today, album groundbreaking day. Edward and I spent the entire afternoon listening to music and making music (we started and almost finished an entire song – I wrote piano, Edward wrote the lyrics), I played him some of the unreleased dad record, he played me the entire new legendary pink dots album (so much of their stuff is available on bandcamp…this is one of my favorites: https://legendarypinkdots1.bandcamp.com/album/the-maria-dimension-2012-remaster

we are working in a tiny room with little equipment. just the basics. Imogen Heap, who lives nearby, loaned us a giant keyboard, which I picked up in a black cab on my way here. this will be my life for the next three weeks or so, sometimes with a baby, sometimes leaving to share time with neil in London.

we ate Indian take-out for dinner with Edward’s wife Alena and Marie the Irish neighbor, and we went for a walk in the meadows near the house. I carried Edward’s 6-year-old Alice upstairs to brush her teeth. this pull-out couch feels like an embrace.

am I a weirdo for wanting my life like this, instead of in a snazz studio and a fancy hotel to stay in? the more I live, the more I appreciate humble, real, human space. it’s why I like house parties. it’s why I prefer playing in bars to playing in arenas.

the full circleness of seeing Edward one year later – this time without a pregnant belly and not weeping in his arms at a train station that I had to turn around and head for the airport – feels like it’ll likely work its way into the music.

how could it not.

I’m looking forward to emptying my heart into some songs, it’s been overflowed and bottlenecked and stuck for a while.

the U.S. dad & me tour is selling and I hope you all come…

Jherek and I are still working on a surprise. it’s COMING. soon. to be thing’d.

I may be coming to you guys for some inspiration for these next few weeks of songwriting. stay tuned. I want to try some things.

I am so grateful that you are all here and crowdsurfing my life as I make the music I want to make. I love you and I feel it a lot on night like tonight.

love from the couch…

sharing the cosmic cold sore: a meditation on life, death, and art (and anthony’s new book)