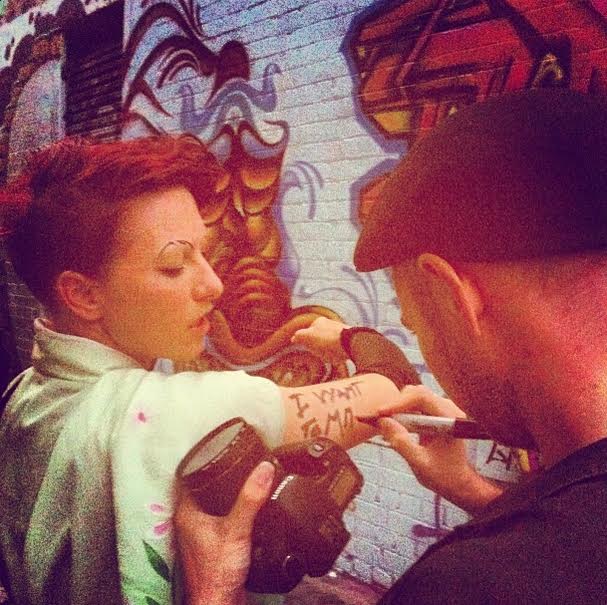 a little background on the patreon video….

March 04, 2015
here it is, the patreon video.
a little story behind it….if it isn’t obvious, the video was shot in the exact same spot we shot the kickstarter video – almost exactly two years later to the day…it was shot RIGHT as i was finishing up the five-week-marathon during which i wrote “the art of asking”, in february of 2014.
i was lucky that my original kickstarter film-patrner-in-crime, jim batt, happened to be in melbourne at the time. it was like groundhogs day: i sourced a keytar, went to same shop (deans art in fitzroy, on gertrude street) to buy some fatty markers and posterboard, spread those fuckers out on the floor of the same rental apartment i was in during the making of “theatre is evil” (which was when i made the kickstarter video), and went to work.

jim writing on me
this time we had help: jim brought along his brother tom batt, and i brought my friend fiona koski, and they helped us dodge oncoming automobiles. fiona also sat and helped me decorate ALL THE THINGS – i did the lettering, but that poster with the spangly sparkles and ribbon on it was ALL HER. i cannot take credit.
also, the Game of Life was donated by @marsofanne from twitter – i asked if anybody in melbourne had one and she popped over.
i am dead serious about wanting to write a short book/story about how truly fucked the Game of Life is.
it was one of those moments i had when i couldn’t believe i wasn’t stoned or tripping and it occurred to me HOW FUCKED UP IT TRULY IS.
it’s so fucked up.
anyway.
THANKS ANNE!!! 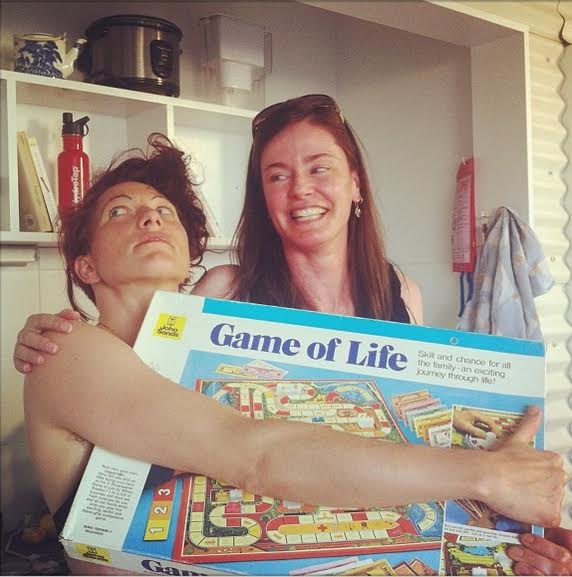 we also, if you can see towards the end of the video, started to RUN OUT OF LIGHT, because we didn’t start filming this sucker until later in the day. we therefore reverted to the old “let’s use the car headlights” trick (i’ve done it in videos before – it works!) but neglected to think about the poor car battery.
we therefore have one more person to thank: david gates (from the band Tripod​), who was the only other person i knew in the neighborhood with a car. he came over and gave us a jump.
so thanks to all these people, ESPECIALLY jim, who edited the shit out of it and waited A YEAR while i got my shit together.
you’re a trooper, dude. if you want to follow jim on twitter, he’s @battsignal. (better yet, hire him to make a video for you).
now
why did i wait so long after making the video to launch, you ask?
it’s a good question.
i really wanted this to WORK, and i wanted to have enough free time to launch in correctly, and THEN to not keep everybody waiting too long for The Things.
launching it while i was working on the book seemed absurd: i barely had time to answer my basic emails. and then, because the book was turned in so incredibly 11th hour, i had no time off: i went straight to bard (literally the DAY after i handed the manuscript in) and started daily work on The Bed Show at bard. then it was the holidays. then it was the australian book tour (and on top, the south african house party trip).
now feels like the first time in over a year i actually have my head back and can start thinking about Making Things again.
so that’s why.
the response so far is insanely wonderful: there’s over SIXTEEN HUNDRED patrons, and i’m looking at a salary of over $16k per piece of content. i cannot wait to start working, honestly. this is going to kick my ass.
if you haven’t supported yet, i hope you do.
this is going to be awesome.
i’ll be sending out my first message to all the supporters later today/tonight.
za link:
https://www.patreon.com/amandapalmer
Back to Blog
« Previous Post
Next Post »

*drum roll*…..THE NEW STOP-MOTION VIDEO for “WANT IT BACK” is UP.