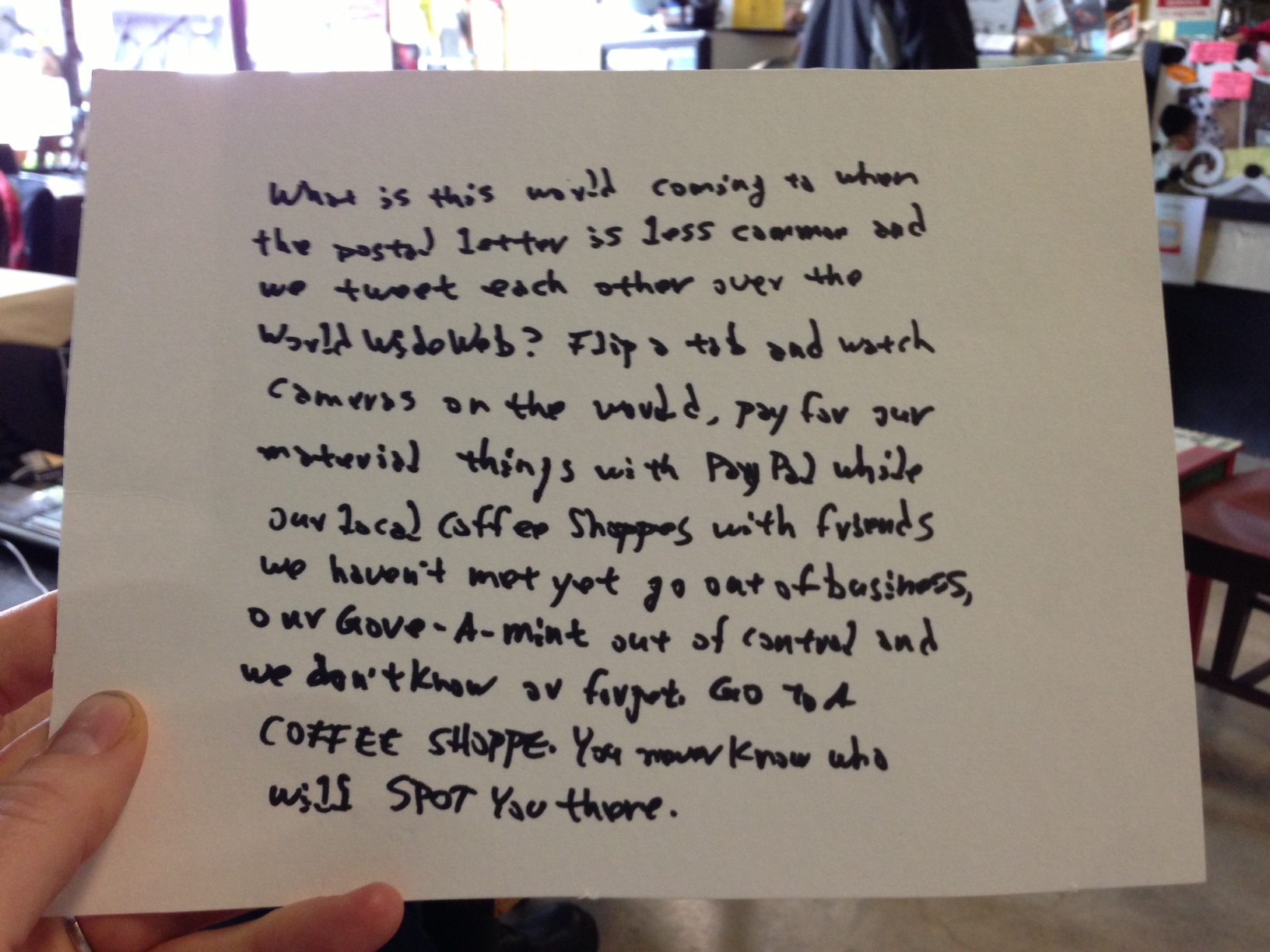 it’s been a hard week – but i wouldn’t trade my life for anything.

i’m currently blogging from a cafe near seattle.

i’m sitting next to cliff, a marine veteran. i asked him what kind of veteran, because i saw his baseball cap.
we’ve been chatting for the last hour. he’s now watching the TED talk on his computer.

this whole place is crazy. but it’s beautiful.

some website posted a list of the seven things i’ve done to piss people off.
then new york magazine wrote an article called “the amanda palmer problem” (which actually had some great points about how the internet makes things weird).
but then i had a nice email exchange with one of the boston journalists who slammed me. we agreed that discussing things over beer would be worthwhile.

i like talking to the intelligent ones….the ones who talk but also listen.

i don’t so much like “talking” to the crazy ones….the ones who tell me over and over that i should have a bomb shoved up my vagina.

it’s just not as much fun.

often, when some sort of event like this poem kerfuffle happens, i find myself wishing that i could turn away from the impossible-to-react-to internet and actually BE with the people i’m talking with.

on “real” tour, it’s almost worse. i experienced this when dealing with the musician kerfuffle this past fall.
my internet audience and my blog commenters and my twitter followers are not exactly the same people who are standing in a line outside the rock venue, waiting to come inside to see the show.
or were they? i never knew, really.

i remember really painful days when i was getting slammed with criticism and simultaneously heavily defended, all online….and i’d be blogging and responding and dealing up until the thirty minutes before hitting stage, and then looking out a thousand faces thinking: “who are you?” i wished i knew. my job was to get up there and play music, and connect with the band.

but i don’t turn off and on so fast.

do me a favor the next time you’re at a concert of mine.

remember that the person up on the stage is the same one who is typing right now.

i think this is part of why real celebrities go fucking postal.

the ability to juggle multitudes within yourself is its own art.
every human has to do it.
celebrity or not, our human brains start to break when there are either too many multitudes to juggle, or the balls are too heavy to catch.
then add a giant audience watching you as you try to keep it going….and you get the recipe for breakdown.

this past week, i got my actual wish.

in a stroke of miraculous fate, i was scheduled to deliver three kickstarer house parties this past week.
they were all different, but they were all medicine for what was ailing me.

remember my TED talk, where i talk about staying in that house in miami, and wondering if it was FAIR?

i found myself sitting in a lava-lamp-lit basement room in portland oregon – petting a dog. and drinking. and playing games. and crying. and singing songs. and joking. and talking about life and politics and fear with fifty people who felt like friends…i felt like i was being taken CARE of by these people, even though i was the one wielding the ukulele.

i found myself sitting on a green field outside a winery, petting another dog, watching a girl in a white wedding dress getting drawn on by a bunch of people while we toasted marshmallows and watched.

i found myself in a secret church, listening to people singing and playing piano, and inviting my friend up on stage to stamp along with me.

i found myself sitting on a couch, being given a pair of hand-knit mittens and actually having the time, unlike in a signing line, to actually hold on for a long time while the giver of the mittens cried and cried into my neck.

i found myself relieved to finally be with these people, the sort of relief i often feel when a show is over….but the show was just beginning.

i found myself talking with people about how i was actually feeling and how they were feeling.

and i found myself thinking…is this FAIR? i’m getting PAID for this?

and then i reminded myself….right….yes, it is fair. this is THIS.

sometimes i need to take my own advice.

my inbox has been full of emails from my friends, lending their voices and opinions to the weirdness going on.

i’ve been through so many weird controversies, and they take a certain kind of temperature. who’s there? hi.

some links that have come my way that i wanted to SHARE, because this is a good time to share them:

• our friend nick flynn wrote a poem about the bombing. he reads it HERE.

• steve bogart, my long-time theater comrade and director, send me this with the note “you are not alone”:
“How Far Does a Mother’s Sympathy Reach? Further Than I Thought” by Tiziana Dearing

• @CroWrath sent me this on twitter:
“Using Poetry to Introduce Empathy into Your Child’s Life” by Toni Nagy (via PBS)

but nothing is better than sitting next to a stranger and talking.

i sat next to Cliff the Veteran yesterday, now.

i started drawing (i’ve been doing these drawings for the people who ordered them as kickstarter backers). there are only a handful and i’d earmarked this month
to finally do them and post them to the people who have been waiting for them. i asked the backers to send me photos that they wanted me to draw. 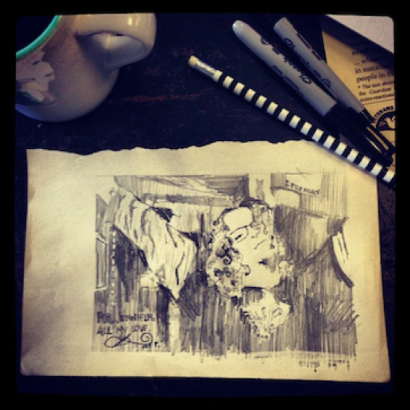 this is jennifer. cliff asked what i was doing, from the table next to me, and we started talking.

he told me that he was part of a group called Veterans for Peace. we shared stories.
i told him i was from boston and he nodded and and he handed me a piece of paper.

this is the paper: 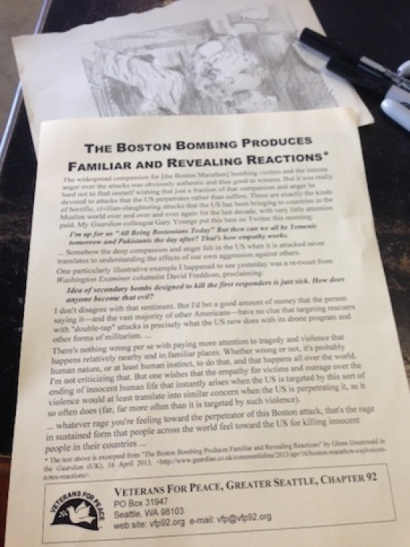 and when i got to

“…somehow the deep compassion and anger felt in the US when it is attacked never translates to understanding the effects of our own aggression against others.”

i looked at this guy, my jaw sort of on the floor.

how did he wind up sitting next to me in a cafe outside seattle?

i don’t know, but i wasn’t going to argue.
as i was putting this blog together, he was learning how to use twitter.

me and Cliff the Veteran have kind of made friends.

but i do know one thing i need.

i need to be around real people.

let me qualify that: i need to be around real, peaceful people.

the internet is not enough.

so….may we meet each other soon.

and may the schwartz be with you.

i fucking love you all, internet/real people.

monica, who put together the portland house party, wrote an amazing blog about it here.

this is solveig (@shadesofsolveig), singing at the secret church party: 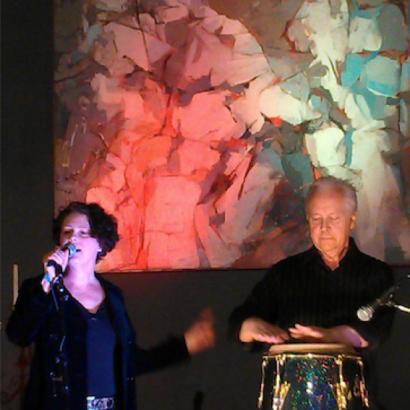 me on the secret church piano: 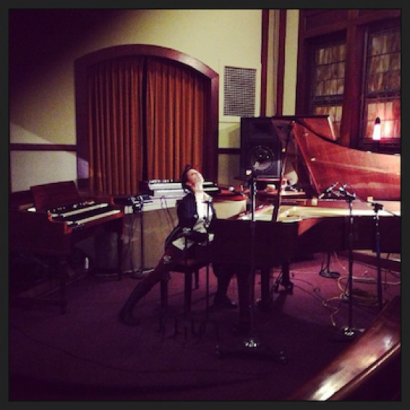 and later….me and brooke, her piano player, jamming out: 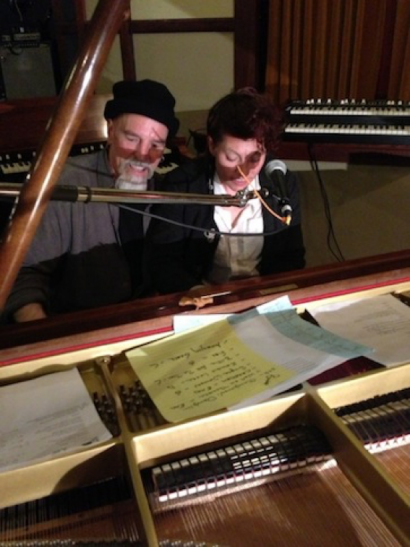 in portland….(photos via Monica Sellers): 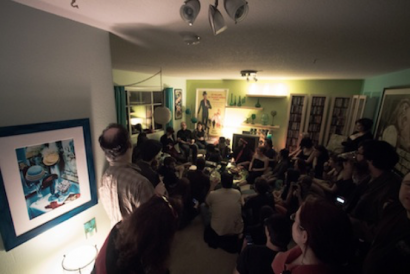 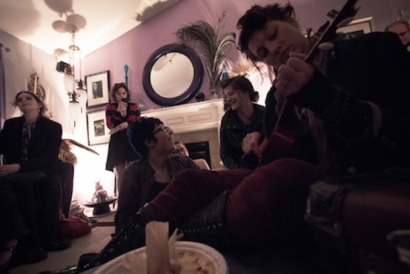 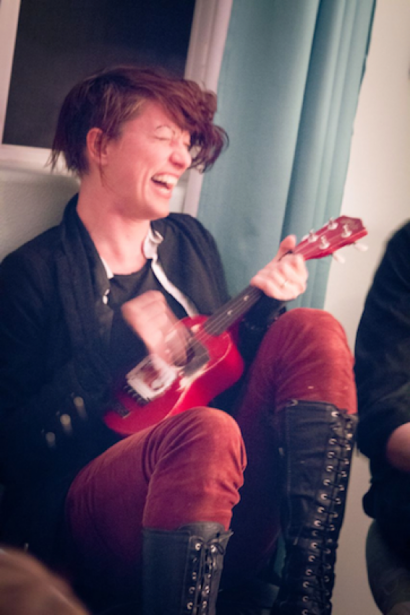 all of use playing “werewolf”. i admit, it was my idea. i needed it: 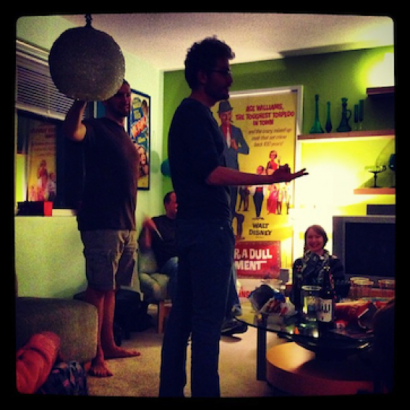 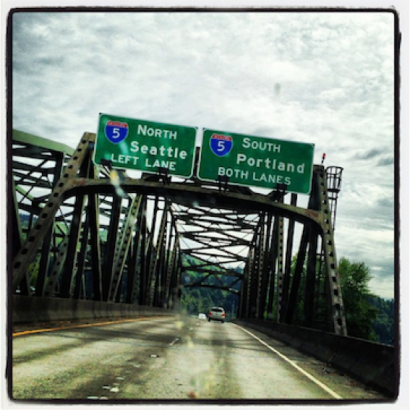 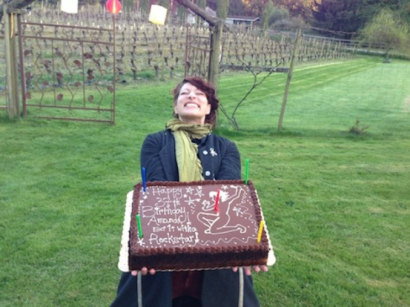 zoe and her mom, who runs the winery with zoe’s amazing dad: 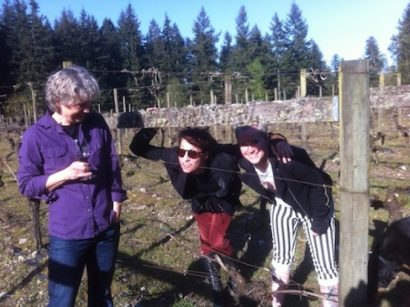 this is me and and zoe and zoe’s mum and dad: 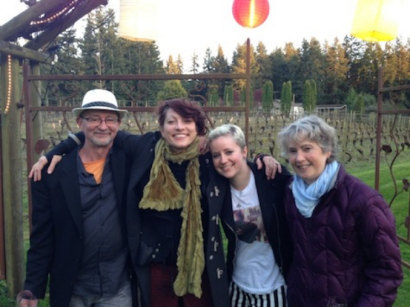 and some general show-time fun: 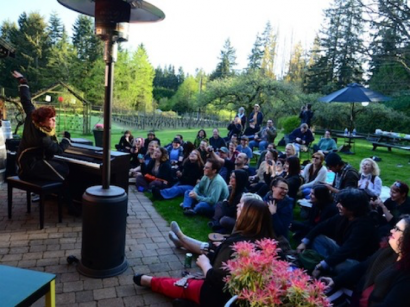 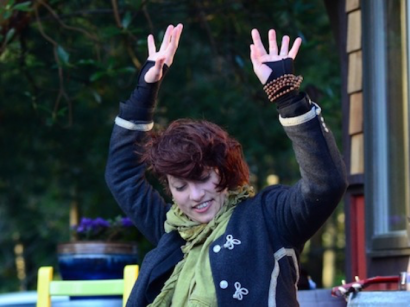 joined by my song-mate jason webley… 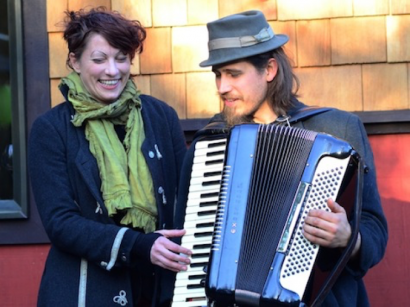 more me and jason (photo by lily)… 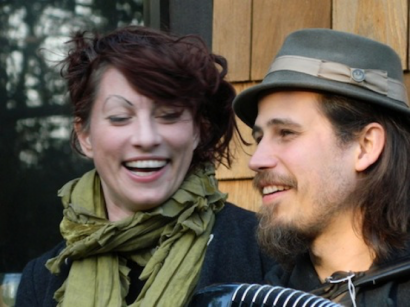 and jason sharing a new song…. 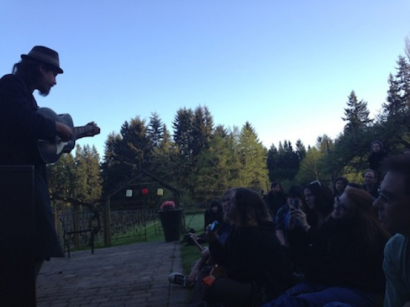 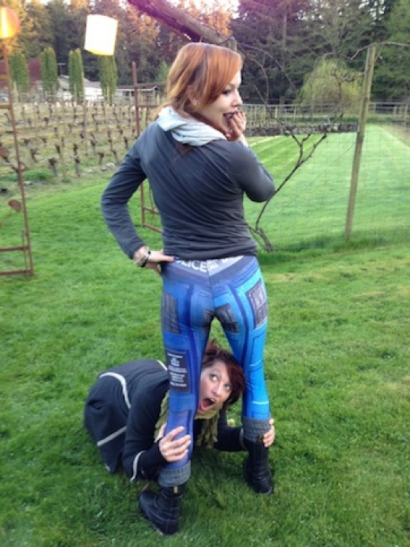 food everywhere (photo by me): 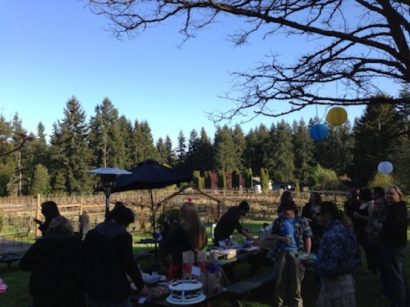 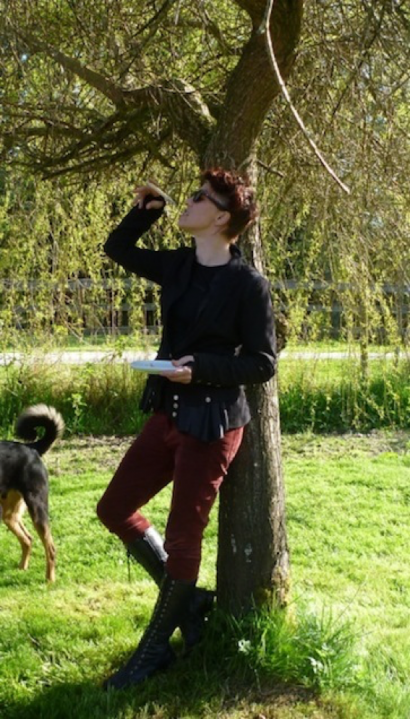 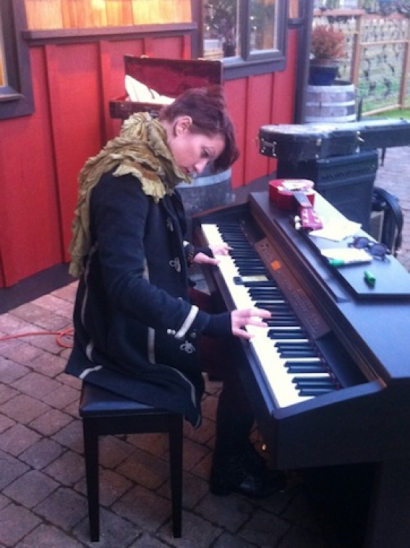 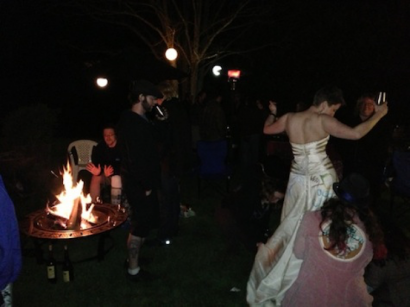 and cherry on the cake…
on my drive between portland and seattle, i ran into kimya dawson (well, we found each other on twitter, THEN ran into each other).
this is us with her little girl, panda. 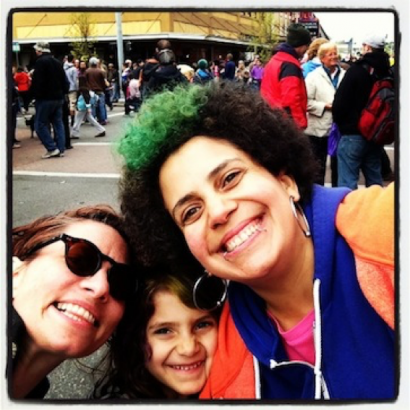 if you don’t know kimya’s music…i highly highly recommend it.
her new record “thunder thighs” is pretty awesome and may make you cry. you can find it HERE on CD/vinyl/MP3 (and it’s also on iTunes).

speaking of music, i bought some old used CDs to accompany me on my long drives.

i dug out “wish” by the cure, which i feel i’ve never given enough of a chance, since i felt, at the time it came out, that it didn’t TOUCH “disintegration”.

i appreciated it more in retrospect.
robert smith has a fucking way with lyrics.

i also decided for the third time since trying, that i just cannot get into madonna’s “bedroom stories” no matter how many times people tell me they love it.

and i finally listened for the first time in life to the entirety of U2’s “achtung baby”.

p.s. back to cliff, from the beginning of the blog. here we are, yesterday afternoon. i’d just given him a twitter lesson: 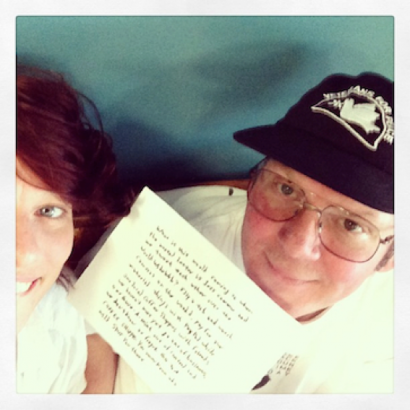 and here’s his note up close (click to enlarge): 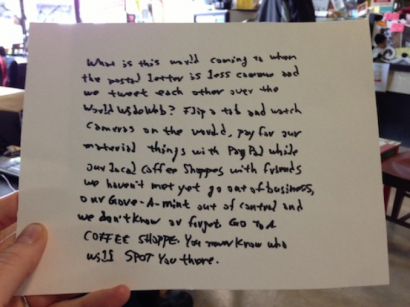 “what is this world coming to when the postal letter is less common and we tweet each other over the world wide web….?”

p.p.s. in march, i was invited to write a piece for salon.com
it’s an open letter – based on the response to my tweet “how many people would pay $5 to crowdfund/pre-order a digital-only morrissey album?” – and it’s now up!! you can read it HERE.
even though i generally try and avoid the comments (when it’s not my site/blog), check ‘em out and chime in on this one. sure, there’s negative shit, but there’s also discussion about the industry, and stuff like this: “It’s up to the fans now to decide if any of us are worth saving because the industry as a whole, and too much of the culture, thinks we’re not.”

shit’s gettin real yo. no, actually real, you can touch it and get its paint on your fingers