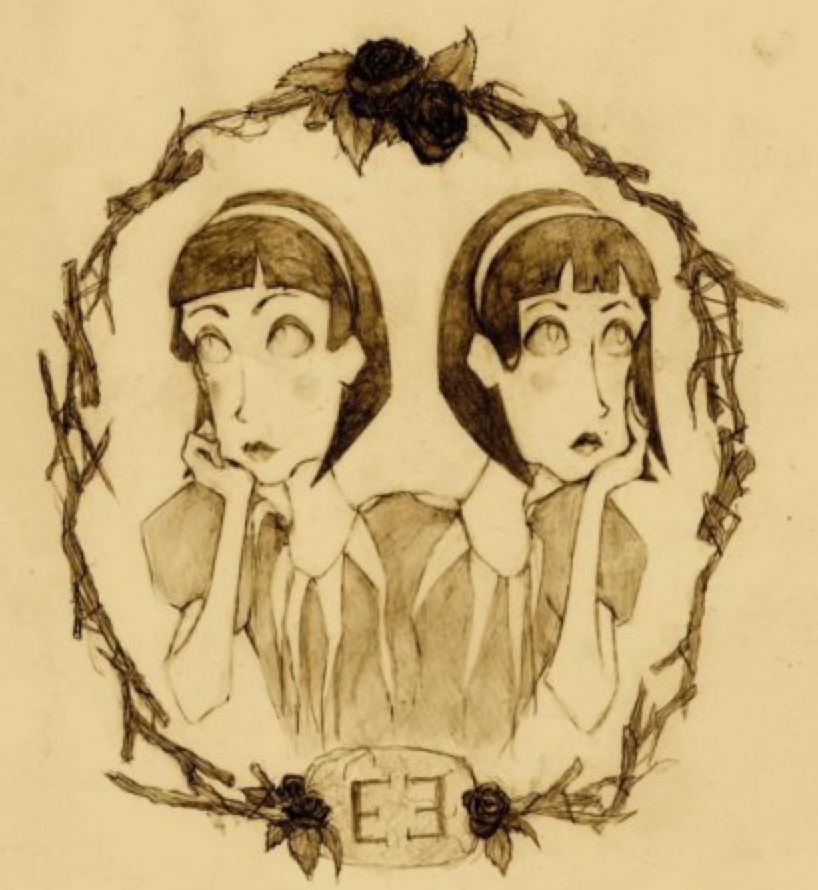 February 07, 2011
hello my comrades….
thank you so so much for all your thoughtful comments on the lexington/columbine blog.
keep them coming.
doing a quick internetz catch-up with kim boekbinder in the GERALDTON PUBLIC LIBRARY: 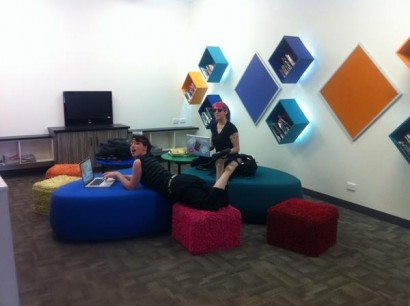 photo by eric.
we are so far away from everything.
here’s where we are: 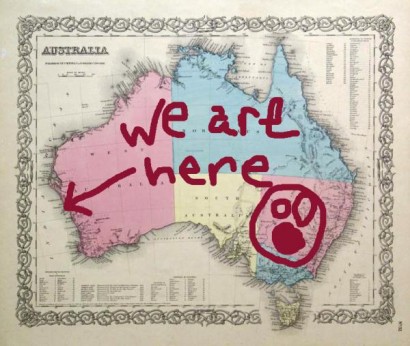 we drove through 5 hours of PURE AUSTRALIAN NOTHINGNESS to get here.
there is NO cell service on the drive from perth to geraldton. we all talked about our lives instead. 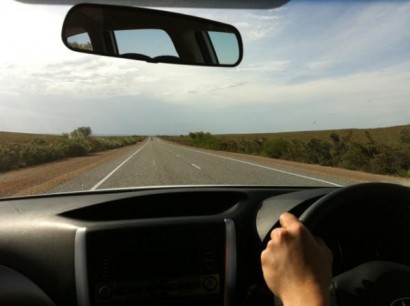 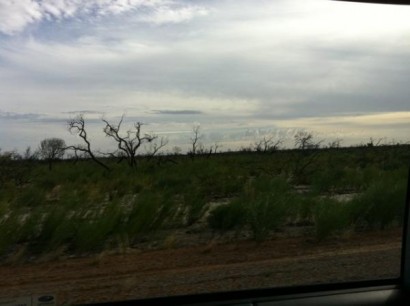 to business:
first of all….
in the last few days i have used twitter to:
- obtain a glue gun and a sewing kit.
- save my leg from amputation by getting advice from someone who works in an ER and recognized my supposed insect bite as a staph infection.
- find reggie watts in the middle of nowhere and grab him for a surprise gig.
and best of all
- find places to eat (sometimes at very weird hours) all over the west coast of australia.
thank you australian twittersphere. you are rocking the funktown.
second of of all: we ROCKED perth, the perth ninja gig (i had a UKELLE ARMY!) and geraldton (??!!!) australia, where kim boekbinder & i wound up playing for the assembled crowd in the men’s bathroom. long story. will blog all of that in a few days, complete with pictures & hopefully some videos. if you HAVE footage from the last few days, PLEASE SEND IT: art@amandapalmer.net.
next of all of all: a lot of you are asking on the blog about the wedding. it’s coming. i’m hoping to get quiet time in byron bay in a few days to finish up editing.
SO
if you didn’t know, the OFFICIAL “EVELYN EVELYN” video, a long long long time in the making, is finally up on youtube.
just in time, too, since the twins are going to be APPEARING IN AUSTRALIA
at
THE ADELAIDE FRINGE FESTIVAL!
it’s back to the spiegeltent!
i’m doing two solo shows, and the twins are doing ONE APPEARANCE ONLY, right before my solo show on march 2nd.
EVELYN EVELYN
7PM / BUY TICKETS! ($40)
with Jason Webley
there’s also a *rumor* that the twins might make a special appearance at a jason webley show in melbourne at the evelyn hotel. jason, kim boekbinder, and the jane austen argument. it’s at 8:30pm on february 25th, the night before my show at the melbourne forum, and you can get tickets HERE for $11 (18+ sorry). but i ain’t saying anything more.
to the point: the video is heartbreakingly beautiful, incredibly detailed and handcrafted stop-animation by the london-based italian filmmaker chiara ambrosio. HERE is her site. you should check it out.
we’re very proud of it, i think it’s one of the most artful videos i’ve ever been involved in.watch it and love:
a word from chiara ambrosio, the director:
The stop-motion animation I directed for “Evelyn Evelyn” came out of a desire to create a visual counterpoint for the song that could offer further insight into the emotional world of the twins while avoiding a literal representation of the song.
The twins, together with Amanda and Jason, gave me carte blanche to create my animation, and this allowed me to engage with the song in a personal and profound way and then respond to it with an equally personal visual language.
As always in my collaborations with musicians and composers, to begin with I spent a long time just listening to the song, immersing myself in the sonic dimension created by the music and lyrics, imagining myself a part of that world, breathing and touching it. From this, images began to form in my mind about the twins: their expressions, mannerisms, the small details of the world they might inhabit, the dreams they might harbor, the anxieties that might trouble them.
Once I had gathered all the information I needed, I constructed the twin puppet out of my favourite materials: paper, masking tape, wire and cotton. 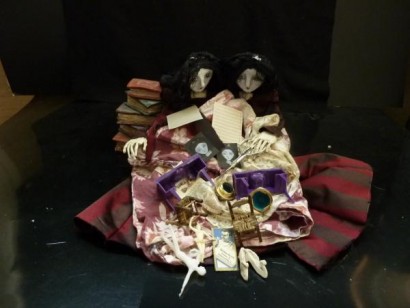 I built their upright piano out of cardboard (with individually cut strips of balsa wood for the piano keys), and hand-sewed their dress. Bit by bit, all the small details of their world came to life, objects that I either built, or found lying around my home, which resembles very much an old czech bazaar (and admittedly that is where most of the things in my flat were found in the first place!).

The shooting of the video took just over three weeks, very quick considering I worked on my own. I set up a makeshift studio in my house, and shot part of it in my friend Nicholas McArthur’s studio (who painted the miniature oil painting you see in the video). As always with animation, the process was at times incredibly frustrating, trying to make the impossible possible through sheer will and stubborness!! Through my years as a filmmaker, I have learnt to breathe, stay calm, and certainly NEVER take it out on the puppet, because if they refuse to move their arm the way you want them to chances are the fault is not theirs! 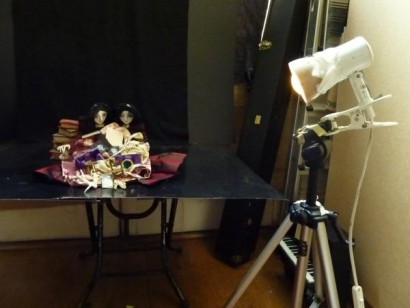 Frustration aside, animation the way I do it- old-style in camera affairs with no post-production manipulation or CGI- is indeed sheer magic, and spending day after day bringing a  piece of paper to life is one of the most inspiring and humbling things i have experienced. Undoubtedly this is why I continue to make my work the way I do. 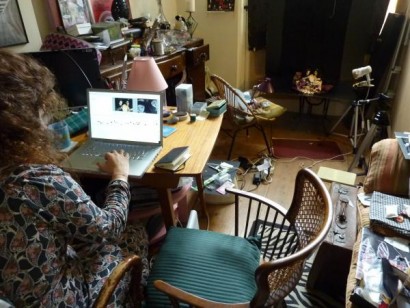 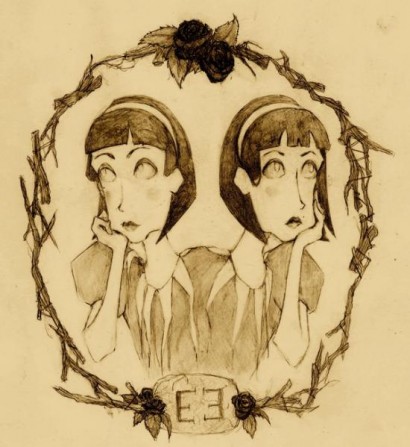 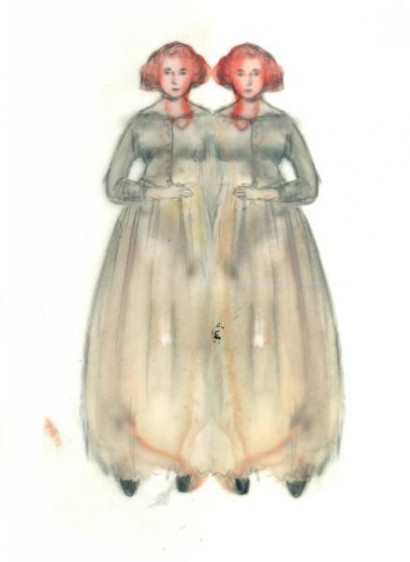 Footage of The Evelyn Twins