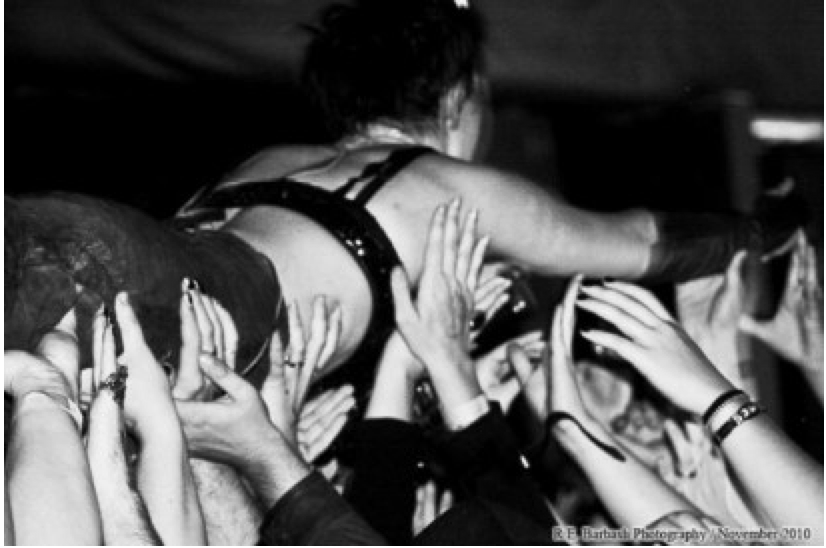 how to tour in a band or whatever

November 19, 2010
OI OI OI!
thank you for all the beautiful comments and love on the wedding blog. you guys are awesome, and inspire me fucking daily.
getting back on tour and connecting with y’all on a nightly basis is Food.
meanwhile….i had to share the below, which was emailed to me by sxip shirey, who was emailed it by thor, who wrote it, and who is awesome.
we know and love thor, he is a drummer and looks like he sounds – a great big hulking mass of fleshy man-drummer: 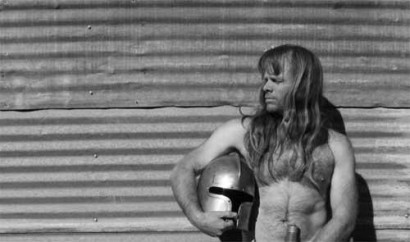 he stayed over at my house, along with about 7 other band people, way way back in 2004(?) when the the dresden dolls & devendra bahnhart opened for the Angels of Light (thor was the drummer).
it’s well-timed, i also just sent it to my whole road crew, resulting in a typically unsavory email chain of Your Mom jokes.
How to Tour in a Band or Whatever
1. Don’t Complain.  Bitching, moaning, whining is tour cancer. If something is wrong, fix it or shut the fuck up you fucking dick. Goddamn.
2. If you fart, claim it.
3. Don’t Lose shit. Everybody loses shit. Don’t fucking do it. Asshole.
4. Don’t fuck anyone in the band. There are tons of people to fuck who are not in this band. Dumbass.
5. If you feel like shit all the time, drink less beer at the gig. You will play better & feel better. What are you…..a child? Some have the endurance for self abuse. Most don’t.
6. Remember the soundman’s name. He will do a better job.
7. Eat oranges. Cures constipation & prevents colds.
8. Masturbate, duh… Where & when? Be creative. You’re an artist right?
9. If YOU cant carry your suitcase 3 blocks, it’s too goddamn big.
10. Respect public space in the van. Don’t clutter, you Fuck.
11. If you borrow something, return it. Not Fucked Up.
12. Do Not let the promoter dick you or talk you out of the guarantee. If there were not enough people there, it’s their fault.
13. Driver picks the music.
14. One navigator only (usually sitting shotgun). Everyone else, shut the fuck up.
15. Soundcheck is for checking sounds. Shut the fuck up while everyone else is checking.
16. Don’t wander off. Let someone know where you are.
17. Clean up after yourself. What are you…a goddamn toddler?
18. Touring makes everyone bi-polar. Ride the waves as best you can, and remember, moods pass, so don’t make any snap decisions or declarations when you are drunk or insane.
19. Fast food is Poison.
20. The guestlist is for friends, family & people you might want to fuck. Everyone else can pay. They have day jobs.
21. Dont evaluate your whole life while you’re sitting in a janitor closet waiting to go on. You think you’re above having shitty days at work? Shut up & do your goddamn job.
This list was written under the influence of lots of esspresso & anti-depressants while on tour w/ such greats as Shearwater, Swans, Smog, Lisa Germano, Angels of Light, Bill Callahan, & many more. I hope this list will help you get along w/ your co-workers whatever your job is. Contributions to the list by Jordan Geiger, Kimberly Burke, Brian Orloff, Brian Phillips Celebrity Gang Bang, Kevin Schneider, Jonathan Meiburg, Michael Gira and some other folks.
………………..
AMEN, thor.
…………………
meanwhile, the tour’s been fucking KILLING and i’m too tired to write much, but here are some pictures and a fantastic video montage the TWILIGHT TV folks did (with some footage from the extremely exciting project thisoneisonus.org’s working on) of our show in NYC….
and here it is on vimeo, if youtube ain’t yo thang.
clearly nobody has been having any fun whatsover.
PICTURESSSSSS:
tasty drumstick! 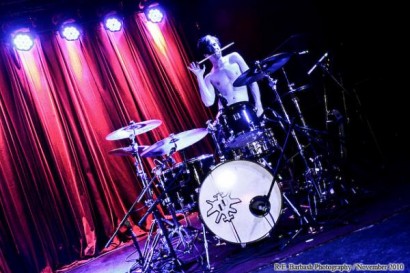 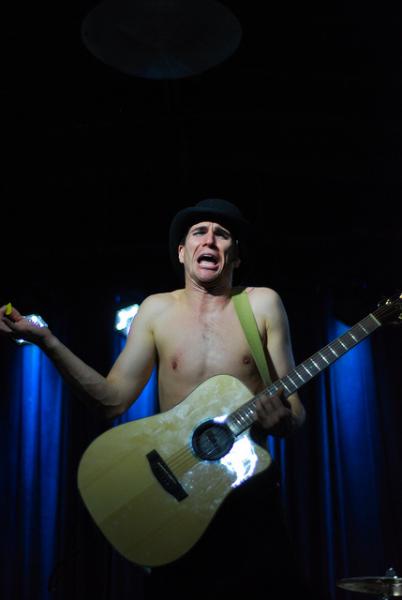 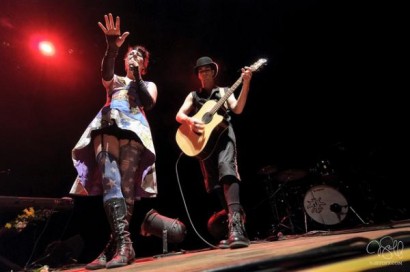 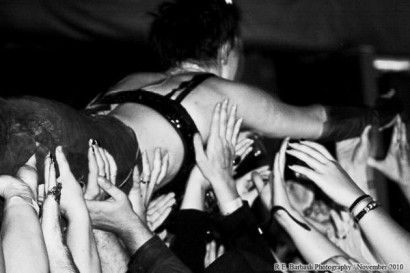 by rebarbash photos
and now…
we’re about to do our last three dates in the southwest, accompanied by two hungarian filmmakers – who are going to film, hungarianly – as well as girl in a coma, who are opening up. they’re SICK. should be killer. if you don’t have tickets already, all three shows are still on sale, but close to selling out. here are the deets:
nov 19, TONIGHT – dallas TIX / RSVP
nov 20, TOMORROW – houston TIX / RSVP
nov 21, SUNDAY – austin TIX / RSVP
and after that…
* a newly announced dresden dolls show december 30th in SAN DIEGO with mr. jason webley opening up for us! tickets HERE (RSVP here), and going fast.
* our final show of the year – the dresden dolls in san francisco on NEW YEAR’S EVE – is chugging along quite well. it’s gonna be a PARTAY. get tickets while you can (RSVP here).
* next week, before heading back to boston for tristan’s record release, the very-sold-out SModcastle show with kevin smith and neil. it’s gonna be crazy good, i can’t wait. we’ll keep you posted as to when it gets posted on kevin’s site.
and speaking of my moxy, to encourage people to donate towards christopher salmon’s Kickstarter – wherein chris is trying to get funding to adapt neil’s “The Price” as a CG-animated movie – neil just put up the original story at here on last.fm, streaming…and if you haven’t donated towards the project yet, it’s HERE, and has just over a week left to get it funded. let’s try and get it funded now and not the 11th hour, k? k. here’s the video:
and one last thing before i go…
a few weeks ago, i blogged about my profound love for the legendary pink dots.
that weekend, was the dolls bandiversary/first show back together, and they were our very special guests.
they were perfect.
it was such a comforting feeling to have them playing before us.
with us, in a way.
one big room of punk cabaret rock love and art love and people and time and music coming together all at once.
it was great to see so many of you getting into them for the first time.
bobbing your heads, smiling, watching, closing your eyes and listening, and going up to their little corner of merch-land for shirts and music.
for those of you not there, in addition to that blog, i put together a little mix — “AFP’s guide to LPD” if ye will — which you can download (in three parts) here, here, and here. 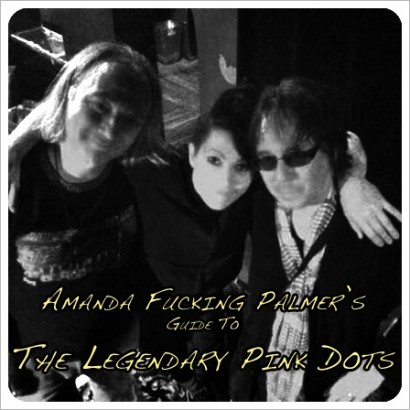 between those MP3s and that blog, i really do hope you give the dots some of your valuable time.
they got me through so much and taught me tons i’ll never be able to express…..but i’m trying, and hope you’re listening.
love from texas,
AFP
p.s. for those of you not following me on twitter, you lose.
this lovely girl, @leylairoyale (aka hillary), randomly tweeted at me that she had an apartment walking distance form the venue and would trade a visit to her and her cat, plus cello serenading, for tickets. 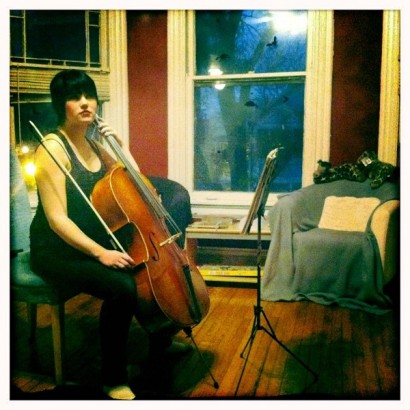 and she let me try it: 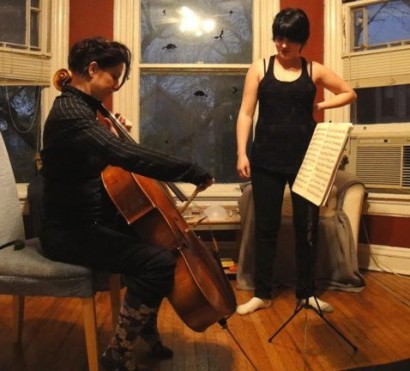 i butchered a few notes before politely giving it back. no zoe keating am i.
of course i went. she was an awesome serenader (i requested bach cello suites). her cat mostly hid, but it was nice to see an animal. also, she made me tea and had cookies. also, she loaned me her toy piano for the show. also, i convinced her to not only come to the show but bring her cello and play before the gig in the lobby.
who says twitter doesn’t change the world?
Back to Blog
« Previous Post
Next Post »