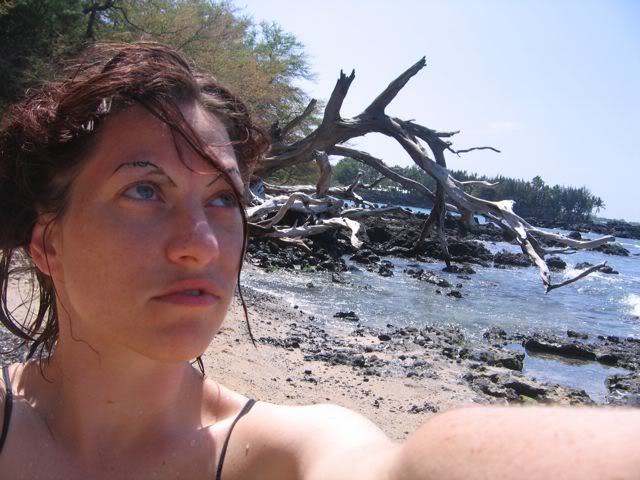 when you are constantly being photographed, and used to seeing
photographs of yourself in candid and not-candid moments on a day-to-
day basis, you get to know your face outside the mirror and through
the photographs.
if you don’t mug to the mirror the way you mug to the photographs,
unless you have a lot of time on your hands or you’re one of those
mirror-muggers who regularly spends hours locked in the bathroom
making faces at yourself from different angles for hours on end (we
all go through that at some point or another, some more than others.
don’t lie), then you get more information form the photographs than
you would from the mirror.so starting about 3 years ago i noticed that wrinkles were showing up
on my face that weren’t there before. and i noticed they were only
showing up in photos in which i was smiling broadly.

lately i’ve noticed that there are a lot more wrinkles. lots and lots
more. then i noticed the other day that when we were being
photographed i was thinking that maybe i shouldn’t smile so broadly
because i might look more haggard and old. then i realized that was a
very fucked up thing to be thinking.

i can’t deny that i’ve gotten happier as i’ve gotten older. it’s a
fact. every year, i am happier. i care less what people think about
me, i enjoy my days more, i worry less about what i’m doing and worry
more about how i’m doing it, which is more fun. i struggle but don’t
struggle so much with the fact that i’m struggling. i am still
totally confused by whether my life, my music and my art is a path
i’m supposed to FIND or MAKE and i change the answer every day, but i
stress it less and less.

i was confronted with some of this aging shit when i was in bordeaux.
i was sitting outside a cafe one night, eating my dinner and writing
in peace and a group of very loud and drunk french teenage boys and
girls decided to convene across the cobblestoned pedestrian alleyway.
they were screaming and laughing and being drunk teenagers and it
occured to me that i was not only irritated because i wanted to write
and think and enjoy my pasta without noise but i was ENVIOUS. i
somehow wanted to be on that side of the alley, not on mine. they
looked over at me, laughing, and i saw myself through their eyes. a
woman, in her thirties, sitting at a table, alone, drinking a glass
of wine and eating pasta and writing in a book. i was shocking
myself. i somehow fixated on this: me = old, them = young. line in
sand. why did i care?

maybe it was because i was simultaneously coming to terms with the
fact that i could actually be too old to take someone to bed without
feeling weird. i think your twenties are that perfect sweet spot.
nobody is too old for you or too young for you. you can be 25 and
bang a 19-year-old or a 49-year-old and not really feel the sting.
but once you pass thirty, it doesn’t matter how cool or hot or rock-
star-affiliated you are. you’re old and if you end up in bed with
someone who is twenty, you’re going to fucking feel it. and so are
they. not in a bad way. just is.

maybe i should be optimistic about this and embrace the fact that
awesome and sexy people in their thirties and forties will take me
more seriously because i’m officially not young and dumb anymore.

there is a line between my eyebrows (or where my eyebrows would be,
if i didn’t keep making them disappear) that used to be two lines.
the two lines were sort of always there, a little 11 in the middle of
my face. one was longer than the other. then the longer one absorbed
the shorter one and they created a unified front in my mid-twenties.
then one day, about a year ago, it didn’t appear only when i was in a
furrowing mood. it was just THERE when i woke up in the morning. then
one day it went away again. and then came back. and now it’s here to
stay.

the other wrinkles are appearing around my eyes and mouth and show up
when i smile. crazy, that. this is that creepy ass botox-phenomenon.
if i simply stayed emotion-free, i might look thirty-one forever.
but life would blow. 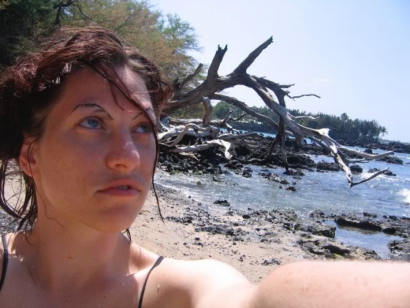 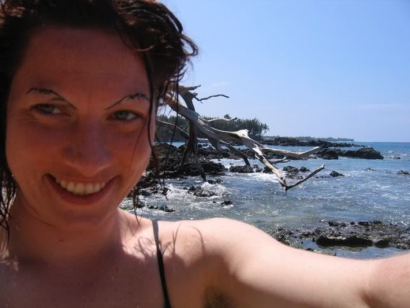 these are from hawaii. you can see the wrinkles quite clearly in the
smiling picture.

maybe it’s also why people in hollywood never smile? i can never
decide if plastic surgery really counts as lying or not. i think
it does. but whatever makes you happy.
my friend had a E cup and got a reduction. i had a friend in high
school who was very into getting a nose job. and i think she did, and
it made her happier. i know some women who are getting into their
fifties and getting their faces stretched back. it freaks me the fuck
out. on the other hand, their faces are just their faces. it’s like
an extreme version of doing your hair up. i’m relatively thrilled
about the way i look, most of the time, even as the wrinkles appear i
find a way to get excited about them (look!!!! i’m WISE!!!!). i
wonder how i would feel if i truly considered myself ugly. i wonder
if i would want to take a knife to me face and carve it up
differently. i wonder if i would hate people like me for saying Just
Love Who You Are and want to punch me in the fucking face because i
was born with a pretty standard and relatively attractive WASP mug.

when i look at footage of myself playing, it’s no wonder. i furrow
frequently. christ, sometimes i look like i’m constipated. and i
smile a lot. i make lots of faces. i am a face-maker.

so i started thinking i should probably take pride in these appearing
wrinkles as they actually denote amount of life lived as opposed to
years lived. this thought comforted me.

lately, when people ask me to guess their age, i ask them to smile.
then i look at their eyes to see if there are wrinkles. then i guess.
i’m HORRIBLE at this game. i usually guess about 7 years off, often
erring on the side of too old, which insults people. what i usually
end up doing is taking my best guess and subtracting about 20-25% of
the total so i don’t sound like an asshole. i think everybody does
this. but anyway, the smiling gives people away.

i’ve been meeting people who i think look my age only to find out
theat they’re 20. this freaks me out. am i just a terrible gauge? i
can also never tell when people are tripping, rolling or on coke.
sometimes i can’t even tell when people are drunk, unless they’re
hammered and puking. then i’m like: wait, somethings wrong here.

i’ve noticed that this age-freakiness has been seeping and poisoning
some of my decision-making, or at least creating an added level of
neurosis.
the downward spiral goes something like this:
ok, if i finish the record this fall i can put it out my march. but
maybe i should take more time with it so i can relax. but if i take
more time with it, it’ll need to come out next fall. then i’ll tour
it in the spring. i’ll be 33. holy shit, i’ll be 33 when i’m touring
on my solo record. that’s when jesus died. fuck. let’s not even get
started on the beatles. they had BROKEN UP by the time they were in
their late 20s. fuck. i’m doing nothing with my life.

i’ve been reading live reviews of cyndi lauper and debbie harry from
this tour. and it seems like once you get past a certain point you
are either “showing your oldness” or “looking great despite your
oldness”. what the fuck?? why does it have to be like that?

i suppose it’s the same thing if you’re young and bright eyes at 17.
you’re either “showing your youngness” or “sounding amazing despite
your youngness”. i thought about his recently and decided that you’re
only really in the clear if you’re over 21 and under 45. before and
after that, you’re fucked. especially if you’re a she.
speaking of which, i coined a term for the paris hilton and linsday
lohan phenomenon:

i’m sure someone else somewhere has already thought of this.

(there was a time when i had brian convinced that “marcia marcia
marcia” would be a great name for our band and lo and behold someone
in ohio had already thought of it. what did people do before google?
i suppose there were just a bunch of bands with the same name and
nobody cared until lawyers got involved. but thank fucking god. the
dresden dolls is way better.)

i am reading an extremely excellent book by jonathan saffran foer
called Extremely Loud and Incredibly Close. i had it sitting on the
shelf i have in the kitchen of books i would like to read, it’s a big
shelf. it’s a bookcase. almost anytime someone recommends i read a
book i buy it, because books are so cheap now on the internet.
anyway, when my friend was staying at my house he saw the book and he
picked it up and said: this, this is a good book. or he said
something to that extent. anyway with the double endorsement i
started reading it and i am in love with it a little. it is many
stories in one and i recommend it highly.

his friend died of cancer the other day. he knew for a couple weeks.
she was older, but not extremely old. we’ve been talking a lot. we
were talking a few days ago about how zen sort of sucks because
sometime you decide to choose to feel more than detachment because
you decide to do that because you decide that that’s life. this is
from page 180 in the hardback version, which page i read about an
hour ago.

When I was a girl, my life was music that was always getting louder.
Everything moved me. A dog following a stranger. That made me
feel so much. A calendar that showed the wrong month. I could
have cried over it. I did. Where the smoke from a chimney
ended. How an overturned bottle rested at the edge of a table.
I spent my life learning to feel less.
Every day I felt less.
Is that growing old? Or is it something worse?
You cannot protect yourself from sadness without protecting yourself
from happiness.