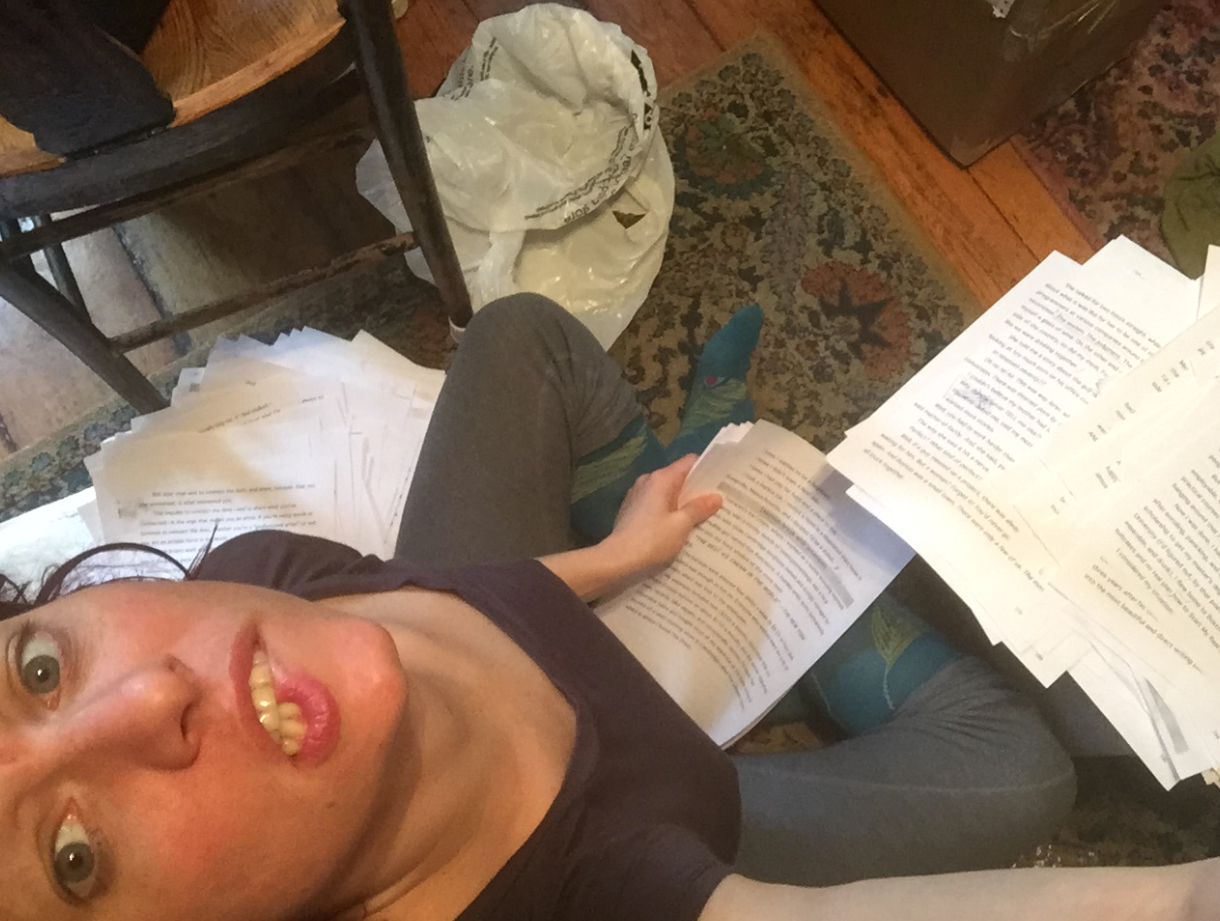 a bit i cut out of the book, and today’s manuscript-page sale IS….SOLD OUT!!

(ED. NOTE: ***and SCENE! 100 books sold in 20 minutes using Twitter! gone! one small step for an artist, one giant step for artistkind. I hope this tool helps many people. thank you for everyone who ordered & made internet history HIGH FIVE ****)

some flotsam and jetsam, and a short (but hilarious) Eight Foot Bride street-performing story that i cut out of an early draft of the book. blame the doula. i love him, but he thought this piece was too off topic. he’s probably right. but now i get to blog it. and considering the racial tensions in america happening right now, it’s pithy.

and, AS YOU READ THIS RIGHT NOW: i’m selling 100 copies of the “the art of asking”, each to arrive at your doorstep packaged with a signed manuscript page from one of the drafts of the book (i chose pages that had scribbles and cross-ed out lines and all that – if they were clean, i didn’t ship em). CLICK ME TO GET YOURS. 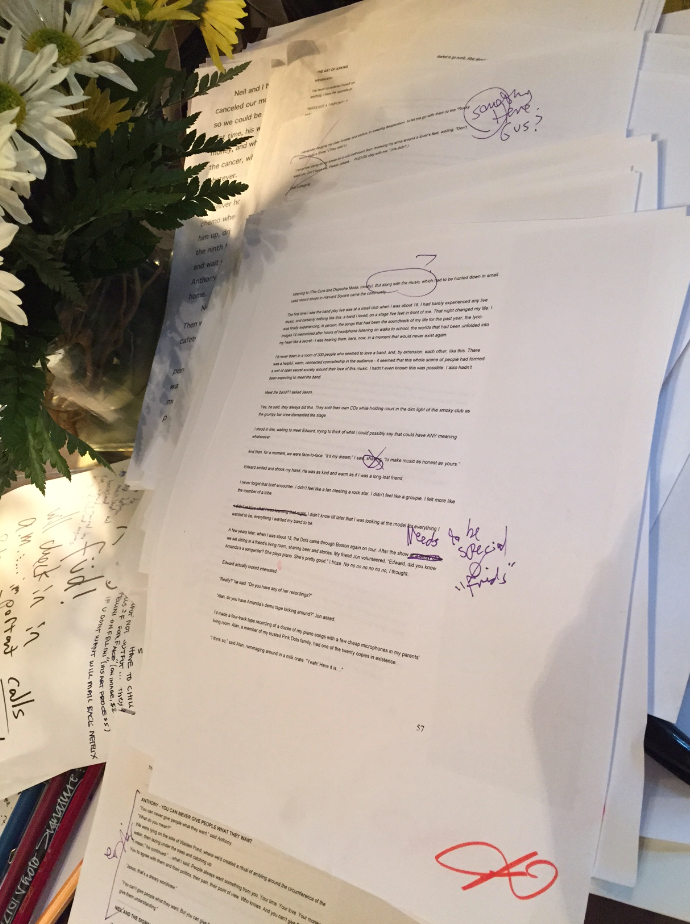 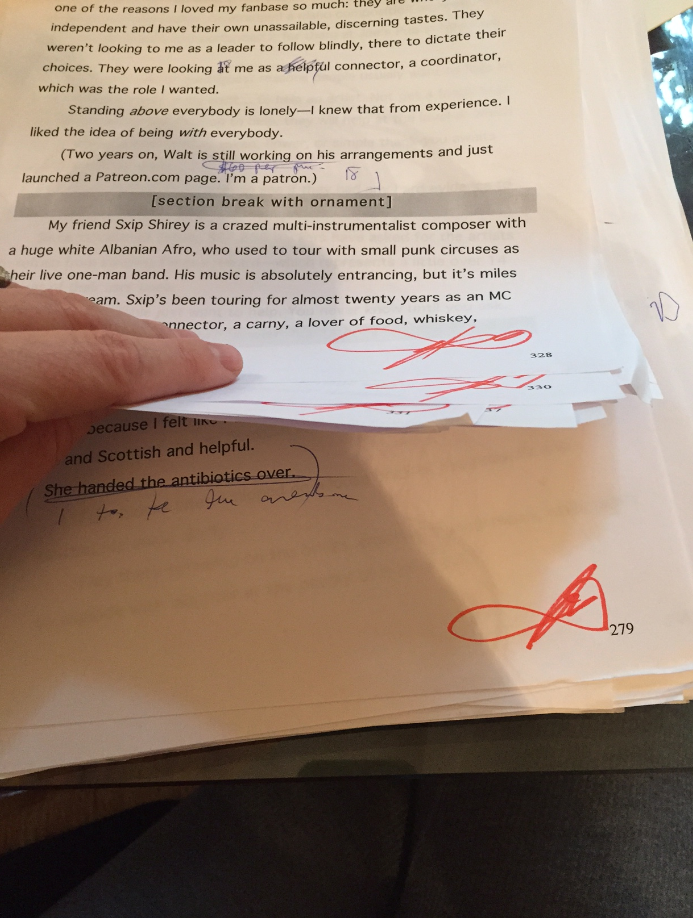 you can read about the happening here in the new york times….http://www.nytimes.com/2014/12/09/business/hachette-to-experiment-with-selling-books-on-twitter.html?_r=1 and note, this times article has a mistake: the manuscript pages AREN’T neil’s, they’re my own, with my own marks. i’m saving neil’s for my MoMA retrospective when i’m 80, during which i’ll slowly tear them one by one, attesting to the ephemeral nature of life, and feed the scraps to a small goat named isadora, who will sit mournfully at my side, dressed in velvet. sad, contemplative arvo part music will pump through hidden speakers.

if you’re on twitter (or if you decide to end your anti-twitter lobby today and make an account…ONE OF US, ONE OF US, ONE OF US), you’ll be able to get it with one click. i’m experimenting along with my publisher, hachette, and Gumroad to install a little “buy” button into an actual tweet (not mentioned in this article: apparently facebook is building similar technology so that you can have a one-click option to buy things via facebook posts as well….the consumer singularity is coming!!!!)

internet moment. should launch about mid-afternoon east-coast-time….stay tuned here and/or on twitter. i’ll be flagging you down.

anyway, to celebrate this grand occasion, and also inspired by THIS article sent to me today by holly granken:
http://www.buzzfeed.com/samhaysom/london-street-performers-share-the-strangest-experiences-the

all about london street performers at south bank, and the bizzaro experiences they had.

so….one day a nice-looking woman, probably in her forties, came up to me as i was packing up my stuff.

“i just wanted to say thank you.”

“i think the message you’re sending by doing this is, well, it’s very important.” she said kindly.

“oh man, thank you”, my face crumpling into a grateful smile. it always made me so happy to when people said things like this. cambridge is a smart town, and there were harvard professors crawling around everywhere. it pleased me to no end when people thought deeply about the meaning of The Bride – whatever academic bullshit it was. i liked feeling like The Bride was deep. i’d spent enough time thinking about it at this point, for christs sake, stuck up on that goddam box.

“thank you so much”, i said, taking her hand in my hand, “it actually means a whole lot to me, that you cared enough to say that to me. thanks.” and i thought to myself: thank you kind lady. thank you for existing, and being nice to me when you don’t have to be.

she really sees me, i thought. i squeezed her hand.

“yes” she said, squeezing my hand back. “i think spreading a message of White Power is very important, especially nowadays…and i’m just very impressed that you have the courage to get up on that box and do it. we really need to stick together and get creative about how we do things, don’t we?”

p.s. if you’re confused about the twitter thing, because you’re not a user. just GO to this link right HERE and take a look. it should make sense. or ask questions here. we’ll be fielding the comments and can try to help. it only takes a few seconds to set up a twitter account and i highly recommend one. twitter – as you know – changed my life.